At its core, writing about games, movies, books, music, and other such matters of subjective taste is something of an experiment in expression. Taste isn’t something that can be objectively merited or delivered. Reasoning for opinions can be expressed, but the opinion itself can’t really be communicated. The concept itself is just beyond reach, too ephemeral to take enough shape to be shared.

For me, writing has always really been about tone. Managing to capture and shape the general concept, to form a wide idea into a narrow focus. To give an edge to the idea enough to elucidate what it could mean, less about what it does in practice. The big picture, in a way, defines which details end up becoming the most important. Without the bigger picture in play, the details would be lost in a sea of their peers, small bits of curiosity that lack the benefit of a deeper intent.

Outside of writing, the grand tone is largely informed by the aesthetic: little design, sound, and artistic choices that total to form the finished tone. In a game like Hotline Miami, the meandering backgrounds, shifting colors, and frantically insistent soundtrack all combine to bombard the player with sensory information, endlessly clawing at the edges of player awareness. Each of them is far too present to be ignored, but none of is invasive enough to take away focus. It’s a gremlin hovering at the edges of focus, ceaselessly raking through the mind. Conversely, a game like This War of Mine accomplishes its aesthetic with a disquieting absence, with only the faint shimmering of pencil markings and the omnipresent breeze whispering across the walls to accompany the many restless, desperate nights. 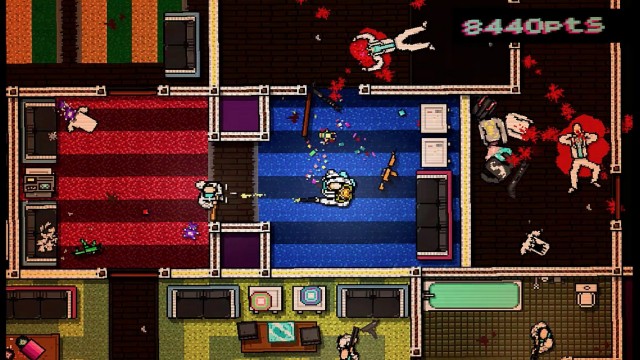 However, like managing to find the right tone in writing, these games cannot be separated from their aesthetics. Hotline Miami is as beholden to its aesthetic as it can be, because the borderline psychosis that haunts the protagonist is the only part of him the player has a tight grip over. The actions otherwise happen in a vacuum, well beyond reach of a rational mind. Neon colored walls and floors stained crimson with the blood of a hundred men are all fine and good for mechanics sake, but their meaning is entirely lost in the haze of a drug-addled introspection, reality warping moments, phone calls, and masks. Hotline Miami can only tell the story it does because of how the aesthetic frames the experience. Without that frame of reference, without the frame of mind, there would really be no narrative. Likewise without the narrative, the mechanics would simply become absent effort, a steadfast repetition of a task that serves too little purpose to be worth indulging. Hotline Miami needs its narrative to give its aesthetic shape, but likewise relies on its aesthetic to give the narrative relevance.

This War of Mine, by comparison, is a heart-wrenching tale of survival set to the oppressive weight of hopeless uncertainty. It feels as though there is an hourglass ticking down toward an uncaring end. A small group of survivors sitting around a radio and heater, looking to the door with equal parts grim determination and helplessness. Each evening brings both the miserable reality of scavenging the remaining husk of the city and a better than average risk of invasion. Every supply lost and survivor wounded represents another grain of sand falling through the hourglass. Hope dwindles as time passes: everything becomes as bleak as the weather. All of it colder, harsher, and more lifeless. The game represents this with a near total absence of color, graphite lines shimmering in the distance beyond the characters’ field of view, and the constant reminder of the wind and rain ready to plague the survivors’ health. Without that context, the game would simply be a series of survival mechanics with occasional hazards, but the grand aesthetic manages to embody the waning sense of hope. A colorless void that has claimed civilization, and left only tatters of hope in its wake. 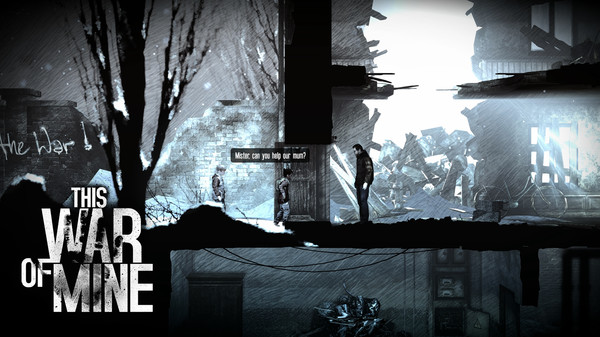 These details are worth their weight in gold. The ability to express such grand ideas in small ways are the signposts that lead to expression. In writing, finding a way to coax meaning out of words that otherwise lack significance is integral to conveying the full emotion. In games, the best most expressive details are those that work in service to the aesthetic. The art, in both games and writing, is in finding ways to evoke the artistry out of the mundane, to bring the emotions to the forefront, to give the right amount of gravity to the intent.

Such details are the conduit to the focal points, the elusive details that make up taste and subjectivity. They can’t possibly be expressed, never in as much detail as they are thought or imagined in, but part of being human is in trying to communicate that which defies communication. Without such attempts, so much is lost, and the world becomes disconnected from meaning, lifeless. Human communication lacks the ability to express it, but in trying, the lifelessness is undone.

In humanity, as in games, artistry is a form of life. One cannot exist without the other.

Tags: Hotline Miami, This War of Mine
← Same Difference: The Economics of Game Buying Part 2
Fast Travels: Digging in the Darkness →