Fast Travels: Digging in the Darkness

Tobias Hanraths takes you on a tour of Hell’s Kitchen in 2052 .

Sometime between 2015 and 2052, something happened to Hell’s Kitchen. If you were to go there in 2015, you’d walk through a neighborhood that’d been gentrified to the point of absurdity. But just 40 years later, all the organic food, quaint boutiques, and luxury apartments have been replaced by grime, hard liquor and desperation. At least, that’s there Hell’s Kitchen of Deus Ex.

Here, in Deus Ex, New York is a city on the brink of self-destruction. People are dying from a mysterious plague, the Grey Death, and the homegrown terrorist group, the NSF (National Secessionist Forces), has stolen a container of Ambrosia, the only cure. Their headquarters are located somewhere in Hell’s Kitchen. As a member of the government agency UNATCO (United Nations Anti-Terrorist Coalition), your job is to find it. To do so, you’ll need to talk to the locals, gain their trust, and learn their secrets- of which there are many.

There’s something lurking here. And you notice it as soon as you step off the subway that lands you in Hell’s Kitchen. UNATCO and NSF troops are still fighting at the park around the corner, so there’s a curfew. All the locals are holed up in the Underworld Tavern or the Tenderloin Clinic, leaving the wide streets and narrow alleyways desolate. The streets are lined with unremarkable house fronts built strictly to be cheap and functional; there’s no Tribeca or SoHo charm here. All the windows are dark. Initially, Hell’s Kitchen seems like a dead zone.  But, after a closer look, you see the signs of hidden life: Security doors with keypads, locked sewer grates, trip mines and laser barriers. Whoever lives here has something worth protecting – or at least they thinks they do. 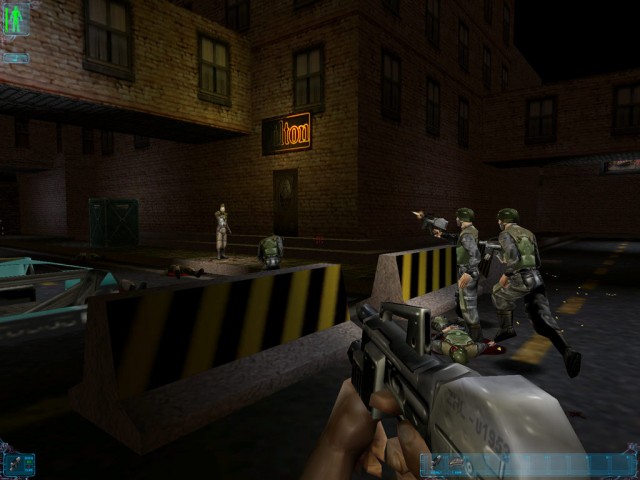 No one really knows how Hell’s Kitchen got its name. Some say it was a police officer who did the christening, some say it was a journalist. Whoever it was, he’d seen a lot of bad stuff, and still looked at Hell’s Kitchen and said: “Well, this is a lot worse.” It’s a neighborhood built on the tradition of keeping to your own; you go to sleep early in your bedroom that faced the backyard. When the cops question you, you say you didn’t hear anything. You didn’t see anything.

The Hell’s Kitchen of Deus Ex has gone back to those roots. All it took was one good recession for it all to come flooding back. And when some homeless people took over the empty warehouses and sewers around the park, no one cared. And when they sold their hideouts to the NSF, no one minded. And when the neon sign on the Hilton hotel partially broke, no one bothered to fix it – the locals just call it “Ton” now. You don’t want to spend the night there, but when you need to, you can find some terrorists holed up inside with hostages. If you break up the situation, you might gain the trust of Gilbert Renton, the owner of the place, and that could come in handy. Like everyone here, he’s got his own troubles: His daughter Sandra ran away with one of the local pimp. Even still,  he knows a little about the NSF, and he’s willing to share information with people he can trust.

In fact, everyone in Hell’s Kitchen is looking for someone to trust with a secret. Each secret helps you understand the puzzle of Hell’s Kitchen a bit more clearly. Sure, they may be begrudging at first, but at the Underworld Tavern, a beer may win you some information. Do a few favors or the regular, and suddenly the floodgates will open. Suddenly, everything they keep to their drinks comes flooding out. These people aren’t just downtrodden, they are desperate. And they are paranoid. “You don’t see billionaires getting sick,” one man in the clinic yells. And then there’s the pilot who claims to have seen Area 51: “It’s where they’ve put Echelon 4.” Or the weapon trader who tells you about people disappearing from the streets and a hidden lab in the sewers. 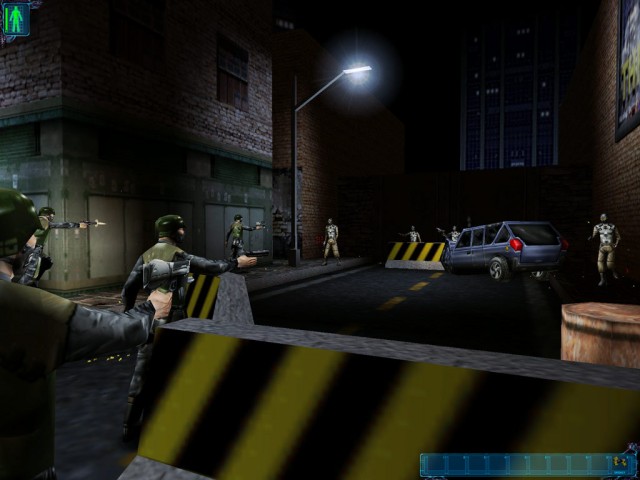 The funny thing is: Dig a little, and some of the conspiracy mutterings turn out to be true. The secret lab in the sewer system? It exists. There are armed guards are protecting it, but the password for the computer system, if you need it, is  “coupdetat..”  Inside the lab, you’ll find a guy named Schick. He’ll tell you about the deadly experiment his captors had him perform on abducted homeless people. “I had to do it,” he says,  “One of them knew enough about biology, so I couldn’t fake it.” You’ll want to believe Schick, but he’ll be acting crazy: launching into full-blown ramblings about his experiments and how to optimize them, even after you lead him back to safety.

You’ll probably start to wonder if you’re losing your mind too. Is any of this real or is the neighborhood  playing a trick on your brain? Spend enough time in Hell’s Kitchen and you’ll become one of the crazies muttering about Area 51 and the Bilderberg Conference and how the army created the Grey Death to wipe out poor people. Or, you’ll realize no one in Hell’s Kitchen is crazy – that everything was a conspiracy – and that truth could be the scariest thing of all.

Either way, your mission probably won’t keep you in Hell’s Kitchen long enough to know for sure, but the things you find out in Hell’s Kitchen will stay with you, will mess with your thinking like the floor moving beneath your feet after a long night of drinking.

Maybe the next time you’re in Hell’s Kitchen you’ll uncover more of it’s mysteries. Maybe it will be different, feel different. Or maybe you’ll be different. Maybe next time you’ll sneak through the streets instead of walking boldly walking down them. Maybe you’ll stick to the shadows letting them protect you. Maybe the dark windows won’t seem uninviting anymore, maybe they’ll whisper a promise: “We won’t rat you out,” they say. “You are one of us,” they whisper, because they know you’re in on the secret now. They know you’ve seen darkness. “We go to sleep early and our bedrooms face the courtyard.”