Miguel Penabella on The Last of Us and The Searchers.

Bridging the worlds of videogames and cinema often proves an exacting task given each respective medium’s dissimilar language, values, and history within culture more broadly. However, videogames owe a lot to over a century of film form and storytelling, and it would be erroneous to assume that the medium exists in a cultural vacuum that should be delineated apart from a rich tradition of artistic practices. I typically refer to an insightful essay from Kill Screen’s Chris Priestman that defends the potential for videogame expression through reshaping the language of cinema, and I’ll cite my own thoughts on how movies can afford videogames greater depth and context with existing themes and styles. The question of how videogames invoke cinema still remains a topic worth parsing out in greater detail by theorists and commentators greater than I, but it’s the foundation with which I closely examine two seemingly distant texts.

Perhaps the most affecting AAA title in recent memory, with a tightly wound narrative calcified by solid performances from Ashley Johnson and Troy Baker, Naughty Dog’s 2013 effort The Last of Us evinces a cinematic quality often ascribed to games, but rarely interrogated thoroughly. Moreover, I’ll propose now that the game’s plot, organized around seasonal change, also bespeaks an episodic television structure, but that thought opens a new argument entirely. So if we talk about The Last of Us and its cinematic forebears, many audiences often identify analogous post-apocalypse travel narratives like John Hillcoat’s adaptation of Cormac McCarthy’s novel The Road, or Alfonso Cuarón’s adaptation of P. D. James’s Children of Men. The comparisons make sense, as certain visual elements, character relationships, themes, and narrative beats overlap. Instead, I’ll point to a less obvious but absolutely relevant kindred spirit: John Ford’s 1956 masterpiece The Searchers, a towering Western at the height of its genre.

The obvious, ubiquitous reading of The Last of Us and its post-apocalyptic influences certainly holds weight, but reading this game through the lens of a John Ford Western accords fresh analysis. By and large the best essay I’ve found that couples the two texts together is one penned by J. Paul McDonald, noting the strong kinship between the characterizations of its two protagonists. Indeed, The Last of Us reconstructs and re-contextualizes the mythological American West of days past, visualizing lawless frontiers at the edge of civilization and a gunslinger outlaw as our deceitful narrator.

The Last of Us starts in Texas, and like The Searchers, the game involves a surrogate daughter figure snatched away, in a late act development, that must be found by trekking westward into uncharted wilderness. Its on-the-road narrative about a man named Joel (Baker) delivering this surrogate daughter figure Ellie (Johnson) to a group called the Fireflies comes with a violent, arduous foray not unlike a typical Western. The Searchers boasts a similar premise: ex-confederate soldier Ethan Edwards (John Wayne), accompanied by his nephew Martin Pawley (Jeffrey Hunter) scour the wilderness of West Texas in search of the Comanche tribe that kidnapped his niece Debbie (Natalie Wood). Both stories centralize a rocky generational conflict disguised as a father-daughter relationship and fixate on protagonists of less than reputable status. 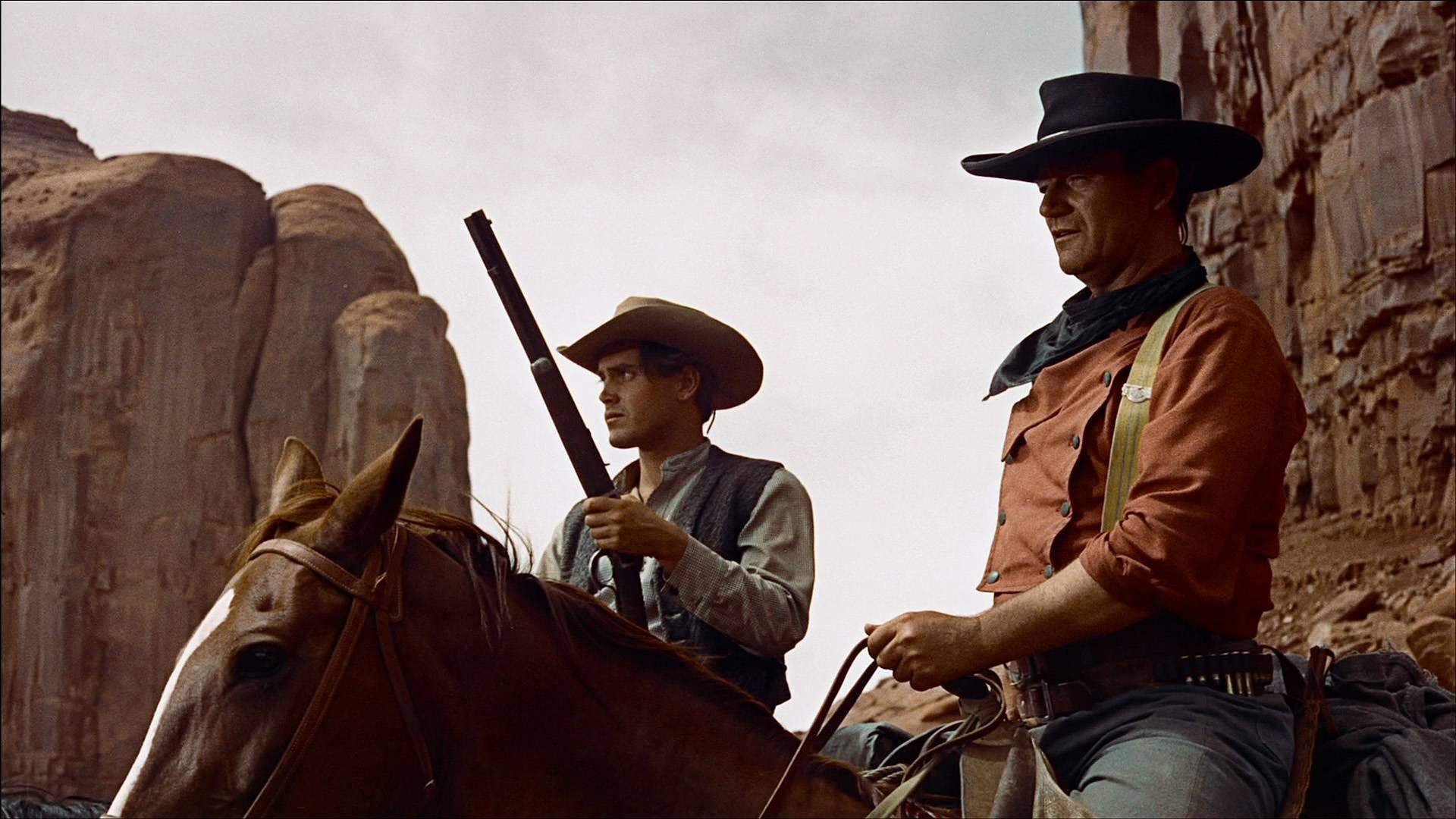 Joel and Ethan are complex, morally dubious protagonists shouldering questionable histories of violence. Both characters exist as antiheroes bordering on true villainy; they’re rough, rugged, and markedly violent figures that prove contemptible, even unreliable narrators. From the onset, each text avoids asking audiences to like these characters, but instead to tread with caution, suggesting that these men come from backgrounds wherein they live by killing. The Last of Us doesn’t shy away from implying Joel’s past as a hunter, the kind of barbaric enemy scavenger you’ll end up confronting and killing throughout the game. These hunters rove the post-apocalypse badlands like packs of wolves, stalking unsuspecting passerby for selfish gain. Joel likely fell in with the deplorable group not long after the outbreak of infection, channeling his grief and loneliness by lashing out in violence. The game prominently throws this tension to the foreground upon Joel’s reunion with his brother Tommy (Jeffrey Pierce), with Joel defending his past as “years I took care of us,” to which Tommy replies only with scorn, noting that he has “nothing but nightmares from those years” and that Joel’s travail “wasn’t worth it.”

Similarly, John Wayne’s Ethan Edwards in The Searchers raises suspicion as soon as we are introduced to his character, hinting at comparable crimes. Ethan refuses to acknowledge the end of the Civil War, defiantly avowing to the Texas Ranger Captain Samuel Clayton (Ward Bond), “I don’t believe in surrendering. I still got my sabre, Reverend… never turned it into any ploughshare neither!” Ethan first appears in the film donning a tattered Confederate overcoat despite the war’s end three years prior, and his substantial collection of gold coins along with war spoils he claims he “picked up in Mexico” suggest past dealings as a pay-for-hire mercenary. Like Joel, Ethan is a reprehensible man who refuses to fully acknowledge a history of criminal actions, but their roles as protagonists shapes our perception of them as heroes. A critical eye on these characters inevitably breaks down Joel and Ethan as selfish men solely interested in maintaining their own emotional security over anyone else’s, using the language of violence.

In addition to the characterization of each text’s respective protagonists, certain visual motifs and narrative structures overlap between The Searchers and The Last of Us. Most importantly, recurrent images of doorways and windows frame a division between the inside and outside in both texts, expressing the sheltered, tamed life of domesticity indoors and the lawless natural world beyond. The Last of Us underlines this image with immediacy, presenting the divide with its allusive menu screen depicting a lonely windowsill, the sunlight and vegetation just peeking through.

The Searchers also begins with expressive framing in its opening scene, portraying the Edwards family emerging from an interior of domesticity and burgeoning civilization out into the desert wilderness beyond the comfort of home. Doorways and windows hide as much as they allow entrance. Ethan is allowed company with the family indoors for a time, but the iconic final shot of The Searchers depicts him and the desert framed in a darkened doorway, the character doomed to roam without purpose, lost in the enveloping world of nature. 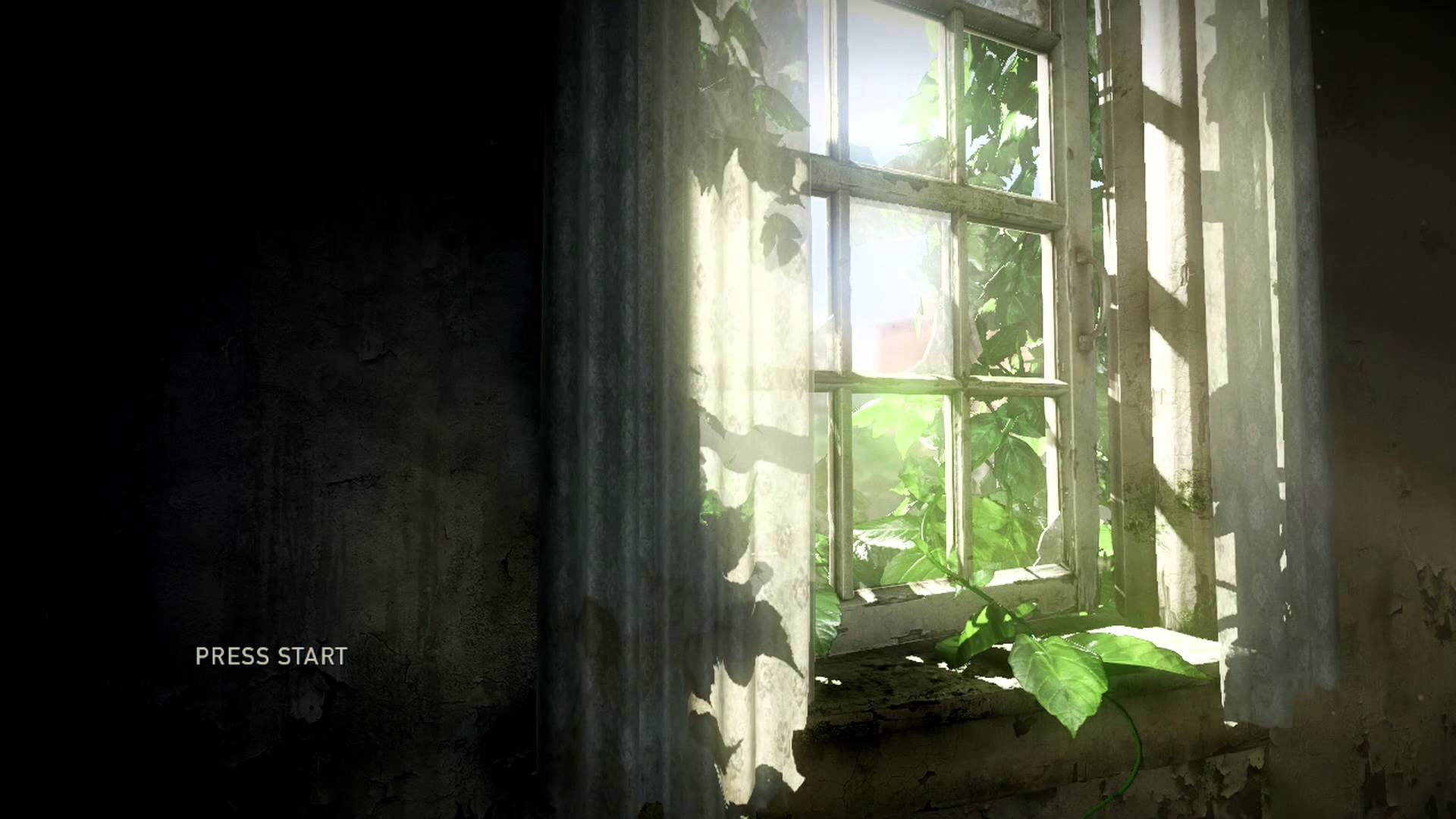 Likewise, The Last of Us emphasizes the importance of the outside natural world and structures its narrative with passing seasonal change. Just as in The Searchers, the eponymous search finds its characters travelling deeper into unmapped wilderness, and the only markers of the passage of time come from the natural world: late summer sunsets, autumnal foliage, blankets of winter snow, and verdant spring greens. Seasons divide The Last of Us into tonally and visually distinctive sections. The Searchers also marks time with natural cues, punctuating the prolonged travel and defining its characters alongside their surrounding environment.

The outcome of the search itself in both The Last of Us and The Searchers bears crucial parallels. The central dramatic question towards the end of John Ford’s movie is whether or not Debbie even wants to be saved, having forged a fresh life in the Comanche tribe. To Ethan, this potential allegiance is treacherous and he vows to kill her without hesitation if it proves true. This contempt cements his savage nature, and like Joel, his pursuit is selfish and detestable. The Last of Us exhibits greater uncertainty with its outcome. When the Fireflies abduct Ellie in an effort to study her immunity and find a cure for the infection, Joel risks all on a violent mission to rescue her. The question of whether or not Ellie would want to be saved remains indeterminate. Regardless, Joel’s motivations are plainly evident: he ignores Ellie’s agency because he’s grown dependent on her role as a daughter surrogate to appease his emotional anguish. His search has no care for her, only for himself.

The analogy between the two searches carries additional visual equivalence with a meaningful, overdetermined gesture that recurs in both texts. When Joel and Ethan encounter their respective daughter surrogates in a moment of duress, they pick the young women up and cradle them in their arms, repeating an earlier gesture at the start of each story. We believe the bloodthirsty Ethan may kill Debbie instead of rescuing her, but his act of lifting and carrying her throws him and audiences back into an important early scene where he enacts the same gesture years prior. For Joel, the gesture is the same. He and audiences are thrust back into that devastating opening sequence where he carries his daughter Sarah (Hana Hayes) when he lifts Ellie and stumbles to safety.

The importance and recurrence of subtle gestural imagery changes the temperament of both characters, forcing buried, unaddressed trauma back to the surface. The visual motif suggests an inability to escape the past, and indeed, both Joel and Ethan’s identities remain tied to harrowing, inescapable histories defined by loss and violence. For both men, the gesture offers momentary release from the frenzy of their immediate present. Ethan completes his search but is left without purpose; Joel is neither lost nor found. 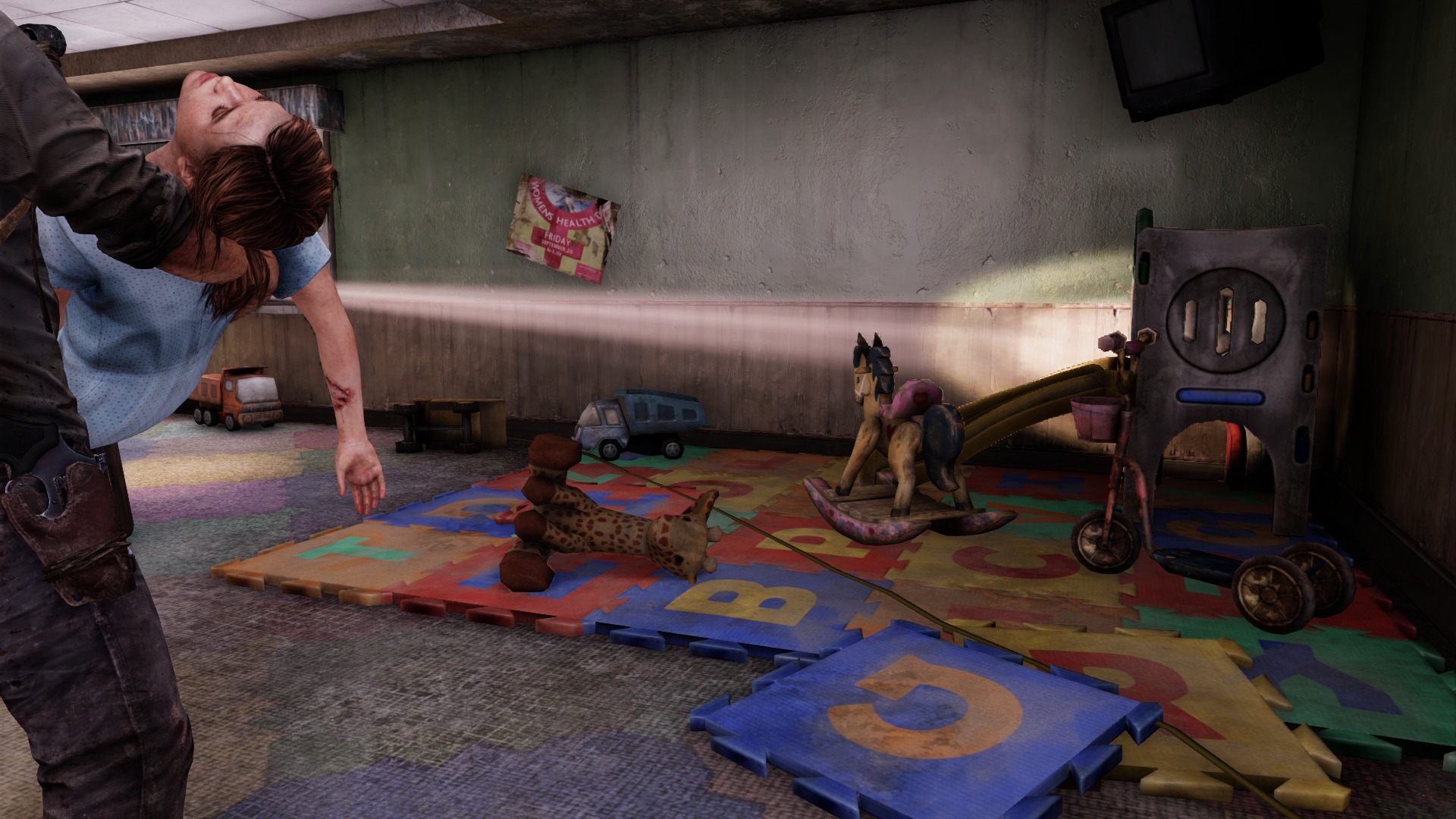 In tying this final link between The Last of Us and The Searchers, we’re left with a fundamental question: why does it matter that videogames have cinematic influences? To a large extent, many people often couple cinematic qualities with a value judgment, typically whether or not a videogame benefits from cinema. This line of thought is useless; these aesthetic choices have already been made by the game. Interdisciplinary analysis only works well when we accept that art borrows from a broader culture and actually read into what this means within specific texts. A better conversation should ask what these cinematic choices communicate in terms of themes, characterizations, and symbolism.

Hopefully, in capitulating to the reality that videogames can and have employed stylistic and narrative strategies from cinema, we can enrich comparative discussion with topics beyond the world of videogames. This expands the language of games and permits freedoms in what the medium can do. In this way, we can be better equipped to avoid the fairly ineffective conversations surrounding videogames and cinematic style. For instance, how about the recent enfant terrible of the videogame world, Ru Weerasuriya and his 2015 game by Ready at Dawn, The Order: 1886?

Now that the tiresome, intellectually hollow echo chamber deriding its “cinematic-ness” has briefly died down, why not closely analyze its cinematic strategies rather than dismiss them wholesale? I can think of a number of ways The Order: 1886 adds inspired layers of videogames craftsmanship vis-à-vis its cinematic techniques. Visually striking blocking of characters towards the edges of the frame foregrounds a lush, enveloping mise-en-scène that facilitates narratives embedded within the environment. The game’s tight aspect ratio with widescreen black bars contributes a sense of palpable claustrophobia that informs how we come to experience and play the game. Numerous cut scenes familiarize players about the characters’ temperaments, encouraging us to play certain ways in line with their characterizations. These are but a number of ways we can launch into insightful analyses that probe the intersection of videogames and cinema.

And in so thinking about videogames within a wider culture, the question must be reframed: What does cinema do in videogames?

Tags: The Last of Us
← Fast Travels: Leaving Outset Island
Off the Grid: Titan Souls →