Off the Grid: Titan Souls

The twist is: Allison Winter doesn’t have a soul.

Trying to catch my breath, I nocked my arrow. I only have one shot at this, just like all the other times. You figure I’d be used to the pressure by this point, but I was never good with pressure. The fearsome beast looming over me is not making it any easier to concentrate, especially as he starts to charge up his attack. In a split second, I let my arrow fly into his exposed glowing eye, and everything goes quiet. I pull back my arrow; it may be reusable, but one shot is all I can afford to use, as tendrils of light pour out of the creature and into me, I’m pretty sure I can taste colors now. After that I leave, just another stepping stone to my ill-defined goal.

Titan Souls is all about fighting bosses and nothing else. In this way, it has a similar premise to a premise to Shadow of the Colossus: You search for boss creatures to slay and you get assaulted by weird substances that come out of the creatures; the world is devoid of non-boss enemies; and it’s very atmospheric. That is where the comparisons ends, however, as Titan Souls fails to leave an impacts despite its introduction of some creative ideas. 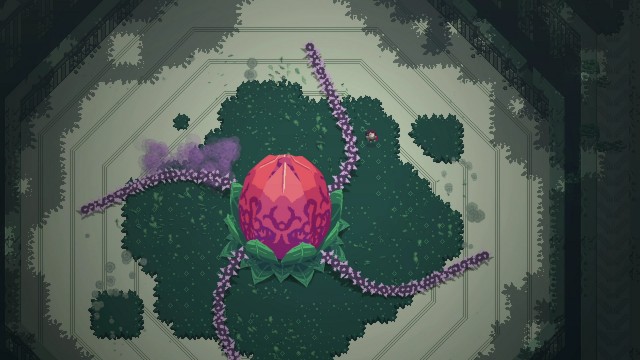 The biggest difference between the two game is that in Titan Souls our unnamed hero and all of his foes can only take one hit before they die. That said, you only get a singular arrow to use and while it has infinite uses, calling it back is a risky act that exposes you to counterattacks. The arrow physics aren’t as in-depth as say Elliot Quest, but the game innovates on its usage. For instance, your recalled arrow is just as deadly as it comes back to you as when you release it; in fact some boss fights even hinge on this mechanic.

A game that is built around boss battles should be expected to have some excellent ones, and Titan Souls does deliver in that regard. Most of the battles are simple puzzles that expose a boss’s (usually glowing) weak point. While not all battles make you taste color, most are similarly intense fights for your life. Finally having a “Eureka” moment about a boss’s’ weakness and landing that hit is immensely satisfying. Sadly, the difficulty of battles is all over the place, and without a distinguishable curve, some bosses are rather anti-climatic. 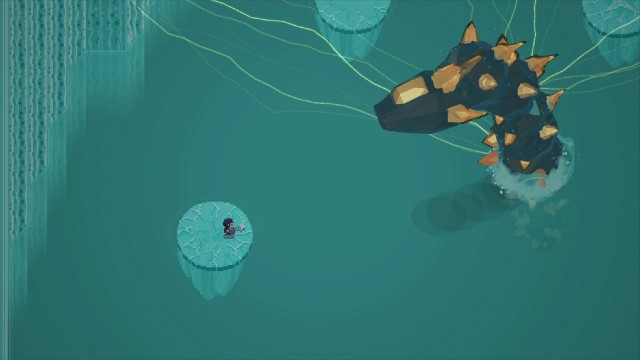 While effort was clearly devoted to making the battles excellent, the rest of the game falls by the wayside. The game is rather sparse in actual motivations, story, and really everything else. The game world is barren and feels more like filler space between battles than an actual world worth exploring. The ruins spread across the landscape seem to be there just to be there. I’d say they add to the backstory if I knew what the main story was. The game is rather tight lipped about explaining itself to the point that I’m unsure where there actually is a plot outside of the Steam description. Maybe, I’m just missing it, but it comes off as a story that is more interested in trying to be mysterious and high-minded than in actually telling the story.
Titan Souls is an interesting experiment for a game that, had it come out during the PlayStation 1 era, would have been considered a classic. However, it came out in a world that already had Shadow of the Colossus and as a result, Titan Souls feels quaint by comparison. I did have fun with the game ,and its short length keeps it from overstaying its welcome. That being said, it lacks its own identity and will probably be lost to the passage of time.