Tobias Hanraths tours Outset Island to a young boy with dreams too big for home.

Heroes are not born, they are made. At least, that’s what most stories tell us. There is usually something in their past – some tragedy, some terrible crime or great injustice, an unsolved mystery or at least a weird prophecy that drives them to go on an adventure.  There are some heroes, though, that might have a simpler reason for their actions. In the case of Link, hero of The Legend of Zelda: Wind Waker, that reason might be boredom.

Sure, there is that huge bird that comes and steals his little sister, an evil wizard, some pirates, a talking ship, and even some stuff about the lost Triforce and a kingdom under the sea, but exploring Outset Island, Link’s home and the place where he has spent the first years of his life, you can’t help but feel that Link might have been desperate for a reason to leave. Of course the whole kidnapping business is a terrible tragedy, but it’s also Link’s excuse to leave Outset Island behind. And when that excuse comes along, he grabs it with both hands and doesn’t let go.

And can you really blame him? Just look at the place! Sure, it’s a lovely island with a forest, a cliff, a beach and a few  huts to live in.  “few” is the operative word here; there really aren’t that many. But the problem is not the island or its size, the problem is its population. The people of Outset Island are a weird bunch, and not in the quaint and charming manner you’d expect from small towns like this. They are downright crazy, each one of them. Taken separately, Outset Island may be tolerable, but in combination, it’s enough to make anyone flee, even for a life of constant mortal danger. 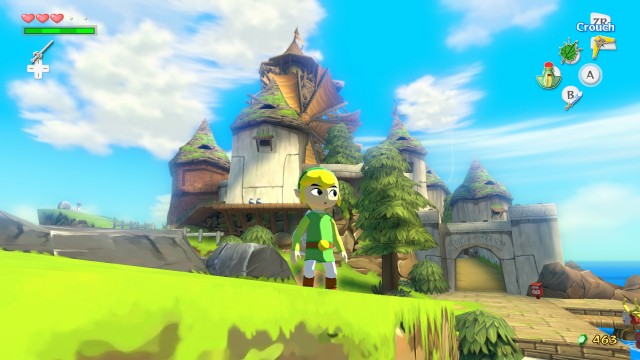 There is Mesa, living all by himself in the biggest house of the island. He seems nice enough, but his whole life seems to be about one patch of grass in his yard. He claims he is constantly cutting it down, but you never actually see him do it, and it’s not that big  a patch anyway. So what’s really going on there? Probably best not to ask.

The other adult you don’t want too many answers from is Rose. She and her family live in a house up a little path, right next to a cliff. They just added a little enclosure to it, for pets, as Rose puts it. To teach her two sons Abe and Joel a little bit about responsibility maybe. And so her husband Zill has gone out to catch all the wild pigs running around the island. Since he seems to be both really bad at it and also absolutely terrified of his wife, Link helps him with his duties – only to discover later that Abe and Joel have simply eaten one of the pigs. Rose’s children are eating their pets, yet this doesn’t seem to trouble Rose much at all.

Then there are Sturgeon and Orca, two brothers sharing two floors of one house. They are both pretty old, but that’s about all they have in common. Orca is an athlete and a fighter, while Sturgeon fancies himself a wise man. Unfortunately for Sturgeon, Orca’s noisy training is constantly interrupting his thinking. That said, the few thoughts Sturgeon has scribbled down on the walls of his room aren’t that great anyway, which makes his constant bickering with his brother even more tragic.

The only person in the house who actually does any work is Sturgeon’s granddaughter Sue-Belle, who can usually be found walking back and forth between the house and the well, balancing a jar of water on her head. It’s pretty safe to assume that Link has a bit of a crush on her, even though she is slightly older than him – but she is also the  only girl on the island who is remotely his age and to whom he is not directly related. 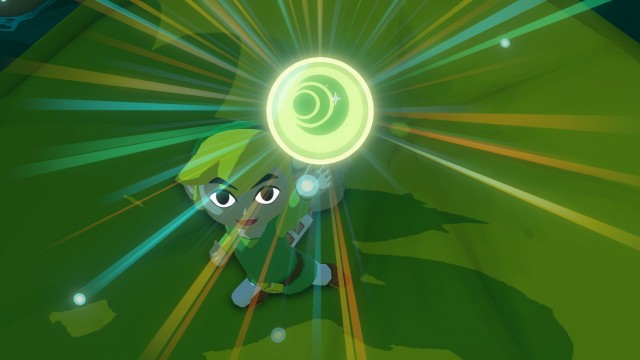 Other residents of the island include Link’s grandmother and his sister Aryll, at least until she is kidnapped. Together they live in the last of the four houses on the island. It’s here that, on his birthday, Link participates in the Outset Island tradition of wearing a green tunic for a day. This tradition acts as a reminder of the legendary hero of old, who defeated the evil Ganon when he was just a kid. Only boys participate in the tradition, and Link is the only young boy on the island of the appropriate age to participate in the tradition. Link hates it, but everybody else seems to be really excited about it, which is no surprise. It’s probably the only exciting thing to happen here in a very long time.

Because what else could you do? It’s a pretty small offering of activities. You could do some shopping: A traveling salesman docks his boat near the pier from time to time, offering exotic wares like animal bait. And a bag to hold the bait. There’s also the mysteriously names Fairy Forest, but you can’t actually explore it. The rope bridge leading there is broken until someone repairs it – even though there’s really no one on the island who seems capable to do so.

The only one on the island who seems to “get” Link, who understands why he feels embarrassed by the green tunic and is bored out of his skull, is his sister Aryll. Little wonder then, that Link would leave the island to rescue her. Not only is Outset Island small and stifling, it’s lonely too. But, out on the seas, a whole new world awaits, and once Link gets a taste for it, he never looks back. After the princess has been saved and the evil wizard has been slain, Link still craves the sea. It’s just him, his ship, the wind, the horizon and the certainty that there is something else out there. Something better.