Andrew Huntly takes us upriver into gaming’s heart of darkness with Spec Ops: The Line.

Ever since Gears of War all the way back in 2006, the third person shooter genre has become a cliché onto itself, with almost every title embracing Epic’s propensity for sticky cover and the eventual weariness of that very particular brown color palette. Playing the first hour of Spec Ops: The Line gives the impression the game is gunning to be the very epitaph of the genre, as though Yager Development saw the closing days of the console generation and wanted to create a third person shooter that encapsulated the genre at its most worn out. We have the graphics powered by the Unreal 3 Engine, the tap of A that sends our avatar into his beloved chest high wall and our innocuous and dull protagonist, voiced by Nolan North. Our two squadmates, a smartass white guy and a gruff, by-the-books black guy, don’t exactly stretch the realms of characterization either.

But given a few hours, Spec Ops begins to mature and blossom into an entirely different beast. Those Unreal powered graphics begin to morph into something gloriously surreal and desolate, and Nolan North’s voice cracks and tears, his banal tones turning into disparate roars. The combat stays the same, functionally uninteresting, but as the context and the story start growing Spec Ops becomes something quite extraordinary.

Inspired by Joseph Conrad’s 1899 novel Heart of Darkness, Spec Ops puts you in the shoes of Delta Force operative Captain Walker, who is sent into a now desolate Dubai on a reconnaissance mission, along with his two comrades Adams and Lugo. Your goal is to locate and, if possible, extract Colonel Konrad after he and his 33rd Battalion are lost in the metropolis during an evacuation attempt. As Walker and his team head further into the city, they discover horrifying atrocities spawned from an insidious overuse of martial law. The situation, along with the squad’s mental state, only deteriorates as they make their way to the tallest tower in Dubai to confront Konrad and make him answer for the atrocities he committed.

Videogames based on novels are more common than you may think, with games like the Witcher series and Metro 2033 being amongst the best examples. Even so, these are very direct translations, adapting story elements and the universe into the videogame medium and allowing the thematic resonance to come from the source material. By contrast, Spec Ops uses Heart of Darkness as a parallel to its own story. Playing the game and watching Walker, Adams and Lugo march on forward, confronted by a darker shade of humanity at every turn and you slowly feel that ferocious burden twist them into broken men. What begins as an evacuation attempt quickly spirals into a tale of bloody, angry, screaming vengeance. It all culminates with the realization that as Walker, and by extension, you, have pushed their way through Dubai to find Konrad, you’ve sunk to the same levels he has. How can you punish the villain for his crimes if yours are just as great? 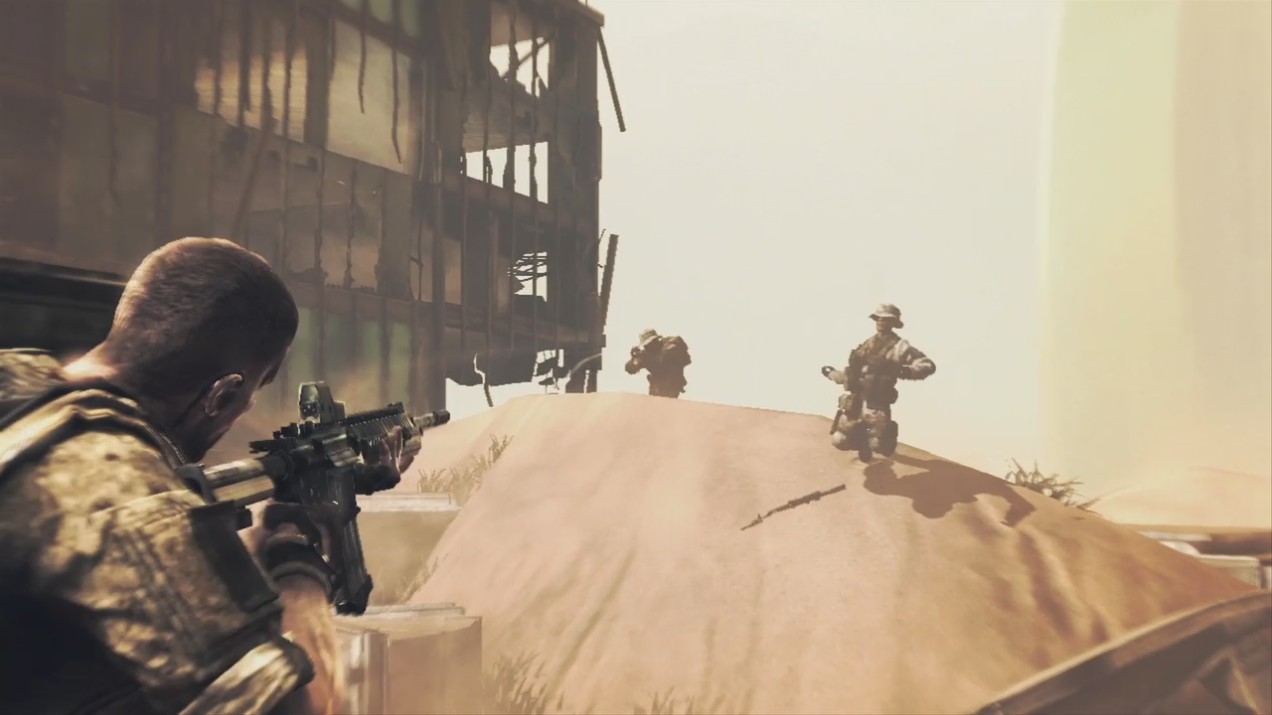 It’s a horrifying idea and one that gamers haven’t really been confronted with before. In our shooters, we’ve become so accustomed to the idea of light versus dark that we can gun down just as many soldiers as the bad guys because we’re batting for the right team. At the end of the game, the villain is punished, the enemy forces are destroyed and everything can go back to the way it was. When the antagonist kills hundreds of your fellow troops, it’s an atrocity. When you kill hundreds of his, it’s justice. Spec Ops has the uncanny ability to completely subvert this mode of thinking. There’s a certain turning point in Spec Ops that demonstrates this perfectly. I won’t give details for fear of spoilers, but it involves an attack on an enemy encampment. Walker and his team come across a reliable way to dispatch the enemy infantry between them and the objective. It’s a cruel way to progress, but the enemy has done far worse, right? The following sequence plays out like a very standard, modern military shooter set-piece: disconnected and distanced, but passably fun. But then the coarsely granular, monochrome filter drops and you’re left to inspect your own atrocities. It’s a moment of introspection that makes you realise you’re no better than those you’re fighting against. As things escalate to a point of violent insanity, it becomes more and more clear there can be no justification for what you or Walker are doing in Dubai.

While the mechanics will always draw comparisons to other shooters, Spec Ops has more of a connection with games like Silent Hill – in particular the second game in the series.. In Silent Hill 2, there are no true antagonists The creatures that populate the street and the horrors you encounter are all projections created by protagonist James Sunderland, built from his deep fears and regrets. They’re the evil within himself made flesh to punish him for his sins. With Walker, as his list of atrocities grows the more things fall apart and the more he’s tortured within his very own head. As you see that damned tower get closer and closer, it starts to look less like a beacon leading you to your predictably heroic finale and more like a monument to your crimes. But still, you and Walker march on. Even as the bodies pile up, even as Adams and Lugo begin lose their faith in their leader and friend, the idea that there’s sanctuary to be found in that tower, that all your crimes will be forgiven once you punish the wicked, propels Walker. It propelled us through other virtual battlefields. Why should this be different? But, secretly we know we won’t be given that satisfaction. We don’t deserve it.

At one point, Lugo screams at Walker “He’s turned us into fucking killers!”. The script is laced with talks of PTSD and other jargon, but it’s that sole line that sums up the core conceit of the entire experience. Walker and the player blast and blow their way through Dubai, trying their very hardest to play the hero. They’ll take down Konrad, evacuate the city and go home having done their country proud. In reality, they make things worse, turning Dubai into a maelstrom of madness and horror that rivals, if not eclipses, anything Konrad could accomplish. Spec Ops: The Line revels in letting you know that this time, you’re no great savior. Not even close.