It’s not terribly surprising that a high-profile title like Bioshock Infinite splits opinions as Moses split the sea. At least, once the initial wave of enthusiasm subsided, seeing how unusual it still is for games to be inspired by art, history and art history over cheap action flicks or science fiction and fantasy novels. Oh, but then people start to notice the cracks in the facade of this brave new world and critical voices are raised.

But if the debate itself came as no surprise, then its tenor might have. Instead of obsessing over the game’s weak attempt at metacommentary, critics focused on the themes Infinite marginalized: violence, racism, patriotism, evangelism. What has proven especially controversial is the question of why such an evidently clever game needed to be pressed into the FPS mold.

Let’s rewind: It all began with Kirk Hamilton, Chris Plante and Michael Abbott (among many others), who opined that the amount of blood, gore and decapitations in Infinite is at odds with its heady narrative. Jim Sterling disagreed, arguing that Infinite was fundamentally about violence, its protagonist, Booker, being a man of violence who’s simply practicing his craft. Jeff Kunzler went so far as to assume that the calls for more non-violent exploration were based on the desire to be allowed to leave the racist utopia Columbia intact.

These counterarguments misunderstand that the initial criticism was never about turning Infinite into some sort of pacifist flower simulation. Though the sheer amount of it is of some concern, this debate was never about there being violence, but there not being any thematic contemplation of the same. In Infinite, you shoot people. A lot of people. You shoot well-adjusted citizens and revolutionaries both, tear up faces with your skyhook and pop heads with your electric superpowers. Neither the dimension, nor the distribution of this bloodbath serves any sort of ulterior message, it is merely thrown in for the sake of our amusement.

Bioshock Infinite’s fictitious account might seem positively harmless compared to the real atrocities committed during the era of racially-motivated violence it depicts, but choosing massacres as its main mechanic is not the way to do these historic extremes justice. As bizarre as it might sound, excessive violence is not the best way to portray excessive violence. Repetition does not make it more and more shocking and absurd, but more and more normal, banal. The narrative charge of blood and guts is quickly spent. 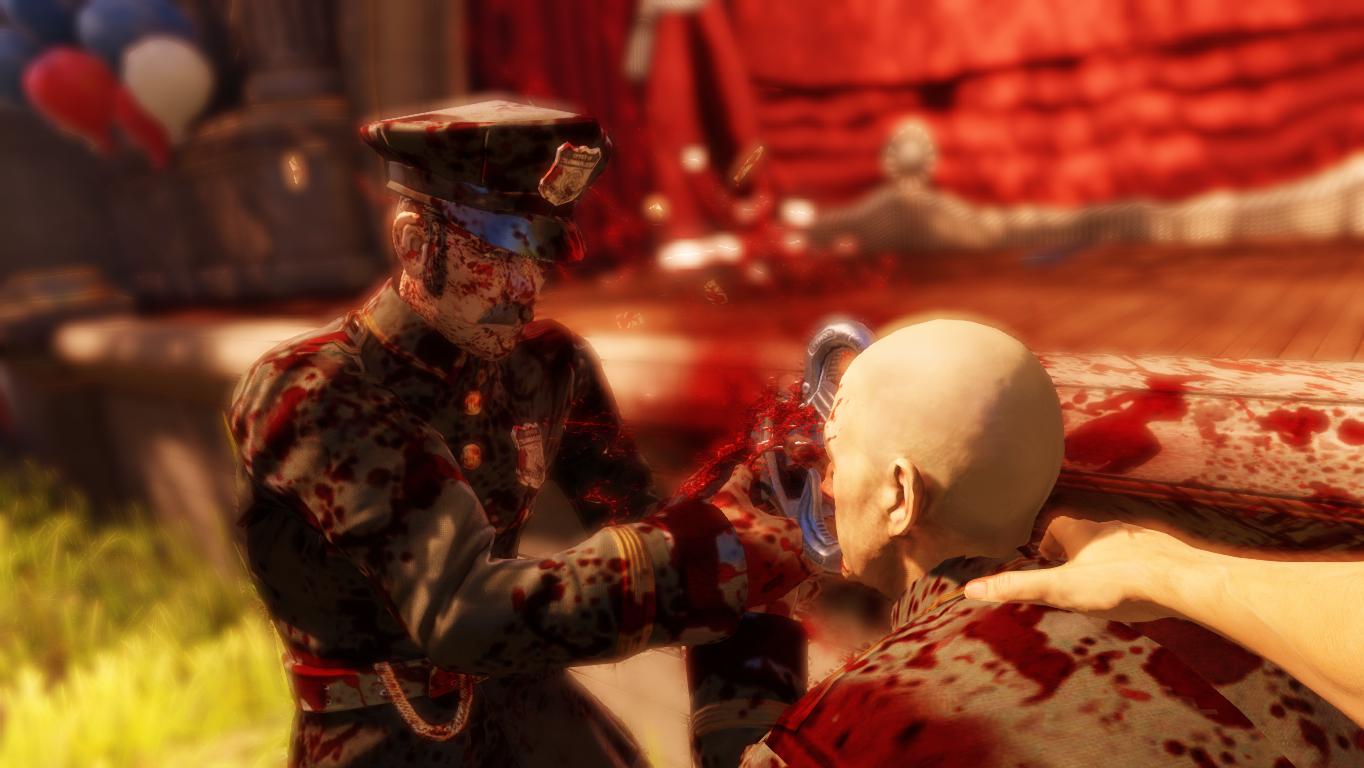 Images of suffering and death are more affecting the more personal and relatable they are. Consider Telltale’s zombie epic The Walking Dead: Over the course of the game, protagonist Lee Everett does not only kill hordes of undead, but, depending on player input, might end the lives of some of the few remaining survivors as well. These scenes are memorable not for their frequency or complex mechanics, but the exact opposite. Because the proposed action is so simple and the characters so familiar, the decision to kill them becomes a damning sentence: You have murdered this person.

What’s more concerning than the sheer, violent excess of Infinite’s repetitive combat though, is the fact that it doesn’t serve the narrative in any way. The fighting is a mechanic end unto itself, occupational therapy for Infinite’s players, whose interest apparently needs to be held with regular doses of adrenalin. For a medium based on play, the desire to be entertaining as well as engaging is understandable, but it’s harmful to consider it an inalienable necessity.

Infinite fails to connect gameplay and narrative in any meaningful ways. Instead of drawing its frontlines around the conflicting worldviews clashing in these skies, the game spreads its carnage equally across all factions. It discards political themes to focus entirely on Columbia’s royal family and its disjointed quantum fairytale. In the end, Infinite is neither about violence, nor politics, or religion. It’s about Booker DeWitt, the tragedy of a single man.

Such careless disregard for its setting is especially disappointing considering the series’ history: While Columbia is reduced to mere set dressing for an interdimensional family feud, the failed, submarine utopia of Rapture was always the real star of the original Bioshock. The moment you arrive in the city, it’s already in ruin. Why? Because the ideology it’s based on – full deregulation, absolute personal freedom achieved at the cost of community – must inevitably fail. Players don’t just passively observe these twisted ideals, but adapt to the broken system with plasmids, a means of buying power by sacrificing more and more of your own humanity.

This premise alone contains more salient political commentary than the entirety of Infinite, which actually portrays militant rebellion against a system of racist oppression and institutionalized violence as equally questionable as said system, and places DeWitt, as the avatar of our enlightened future morals, firmly above both. He gets to enjoy plasmid magic without any adverse effects, continues to grow in power regardless of the evolution, stagnation or regress of his own morals, and never gets in the embarrassing situation of having to clarify his own views on this uprising. Both sides consider him an enemy – sometimes for poorly constructed reasons – so he ends up standing neither for oppression nor for liberty.

It’s hard to read this as anything other than a cowardly endorsement of centrism and political inertia, and even that requires you to ignore the fatalist implications of Infinite’s multiverse mechanics, which stipulate that every possible version of this class struggle must exist in one of its many dimensions. Some of them have failed, are failing, will fail. Others were successful, are successful, will be successful.

Perhaps it’s Bioshock Infinite’s biggest quantum-mechanical stunt that the game is loaded with violence, and still has nothing to say on the matter. It bridges the gaps in its plot with gunfights to please the masses, but rather than using them for any narrative purpose, the story ends up having to justify their existence with a historical setting that remains largely unexplored and a protagonist whose violent past could have been established through less excessive means.

And so Bioshock managed to once again raise questions about the nature of our medium with Infinite, though I doubt they were the ones it intended to raise. Chief among the concerns: Why shooters? Why is shooting still the one, singular mechanic that even profound period pieces need to bow to? Why does every problem need to be examined from the barrel of a gun? Is there no other way, no better way?

It’s not that the whole world suddenly decided to loathe action games, but the highly anticipated Bioshock Infinite offered the perfect example for discussing the disconcerting lack of alternative mechanics. The game promised the shrewd caricature of historical politics and the simultaneous meditation of their underlying themes. What did we end up with? Just another shooter. Such is the damning verdict of wasted potential.