One of the benefits of spectator sports is their ability to relieve factional tension. In allowing  impeccably behaved representatives of specific regions or countries to compete in a fair contest, any historical tension or animosity vanishes as both sides are swept up by enthusiasm and sportsmanship. At least, that’s how many football games pretend it works.

Truthfully, on and off the pitch, violent impulses have never been fully channelled into a wholesome spectacle of discipline and ability. Violence occurs regularly, fuelled by adrenaline on the pitch, and alcohol in the stands. It can happen on any occasion. I’ve seen aggressive opposition fans try to start fights at pre-season friendlies, matches of no consequence attended more by families than by threatening hooligan outfits. And when a meaningful prize is at stake? The amount of weaponry confiscated by the Italian police at the Coppa Italia final a few weeks ago demonstrates the extent of the issue rather… pointedly.

As for the players, where to begin? With Liverpool’s Luiz Suarez biting an opponent last April? With Chelsea’s Eden Hazard kicking a ballboy? At least those actions didn’t affect the result. But what about Joey Barton? Manchester City’s dramatic win in the final seconds of the 2011/12 season, a result which gave them the title, can be partly credited to him, even though Barton played for the opposition, Queen’s Park Rangers. During a tense match, the score 1-1, Barton reduced his side to ten men after pointlessly kicking one Manchester City player and trying to headbutt another. The game finished 3-2 to City, his teammates’ efforts valiant but unsustainable. 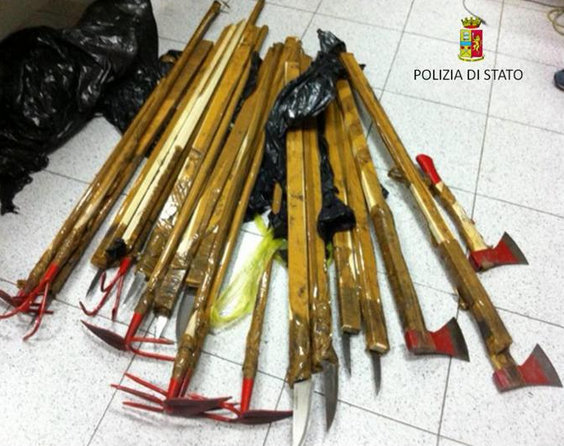 Meanwhile, even those with no interest in football know about Zinedine Zidane’s headbutt, which led to his dismissal in the 2006 World Cup final between Italy and France. Italy’s defensive resilience was regarded as the footballing basis for their triumph that year, but when one of the world’s finest penalty takers – and post-war footballers overall – removes themselves from the deciding match, fortune deserves an equal amount of credit.

You can see how violence is more than a superficial blemish on football matches. These actions can define sporting history as much as any exquisite individual moment of skill. Yet football’s most visible games, FIFA and Pro Evolution Soccer, prefer to ignore this side of the sport. They may present preludes to violence in skippable cutscenes – the snarls, the macho posturing – but nothing more.

Why is this? Well, on the developer’s end, the rows of corporate logos that fill the screen whenever you start the game present many pressing reasons. Sponsorship depends on public perception of the product, and modern football’s marketing has tried to distance itself from its violent past since the vast influx of television revenue in the early 90s. FIFA, the game’s dubious custodians, have no interest in tarnishing their improbably expanding, pan-continental asset. In its current form, sponsors, television networks, politicians and royalty all prostrate themselves before the commercial owners of this idea. Presenting it as a social menace simply won’t sell, while the current approach works perfectly: Viewer estimates for the 2010 World Cup final fall between 700 million and 1 billion, a match surpassed only by the 1.1 billion who watched 2011’s Cricket World Cup match between India and Pakistan. 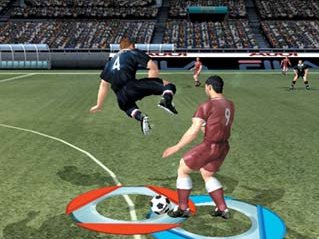 For once publishers like EA and Konami become the modest, diminutive partners in this relationship. To FIFA, these licensed games are just an extension of their global image, which fund a few limousine rides. To EA, the official license has been what sustains colossal FIFA sales. Even during the periods when its competitor PES was regarded as having superior gameplay, it always suffered from featuring alternative superstar players like David… Bickham?

Non-violence is not a moral decision here, just a decision in line with a hugely successful marketing approach. Football doesn’t really do morals, willing as it is to advertise alcohol to children, or extremely high-interest loan companies in deprived areas. As of yet, violence occupies no profitable legal grey-area and can be jettisoned without concern. Not that the attempt to sell football violence hasn’t been made. Point of View had a go with 2002’s RedCard, introducing exaggerated tackles and power shots, but never returning for a sequel. Mario Strikers later had more success with similar mechanics and no litigious, image-conscious footballers to appease.

Real violence, to the extent that FIFA would permit, simply isn’t a selling point, perhaps seen as tainting by players as well as executives. Enough debate already followed Konami’s decision to bring diving to its football series, Pro Evolution Soccer, in 2007. Despite how difficult it was to execute a successful dive in a meaningful position, to some, including the option to cheat was tantamount to endorsement.

Last year’s edition of FIFA sold 15 million copies, so ignoring football’s darker reaches clearly has its benefits. It’s debatable if violence could even be a worthwhile mechanical addition.  Imagine Devil May Cry if Dante could pause his balletic butchery to give demons a backrub. Including violence introduces a similar disruption into a football game’s flow. Football has its own perfectly effective mechanics already in place. In possession? Pass and move, pass and move. Lose possession? Pull back, harry and tackle. Violence breaks that rhythm.

Plus there’s the issue of implementation. The option to attack an opposing player with a single button press would not only be open to abuse, but worse, be completely fraudulent. Violence on a football pitch rarely comes from a rational place, there’s hardly a clear advantage to be gained. A truthful effort to implement this side of the game would use systemically generated impulses, and players would hardly accept being penalized for actions they didn’t choose to make. 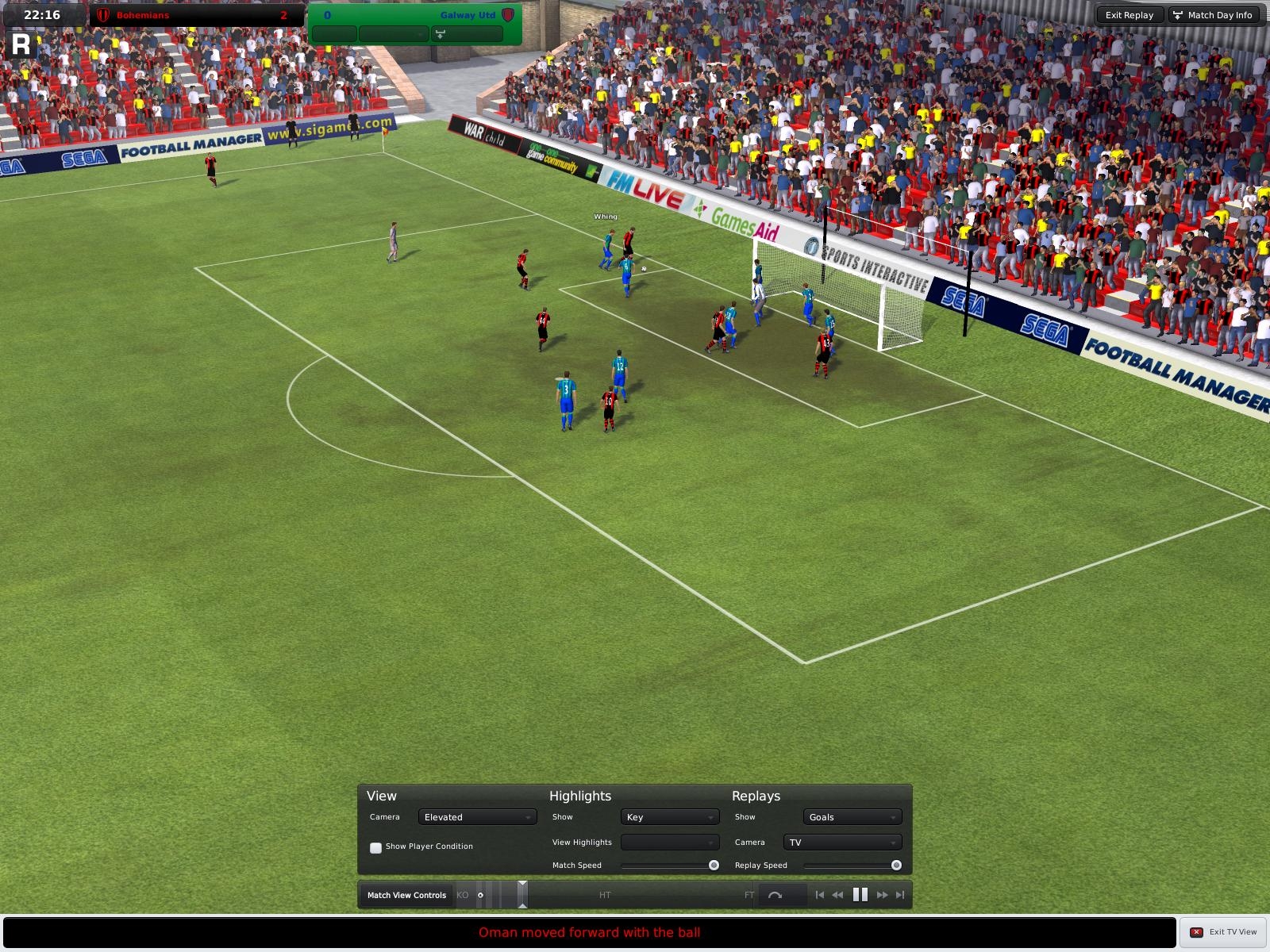 That’s how Football Manager, the one successful refuge for violence in football games, handles it. Sports Interactive’s series won’t even tell you openly who the mostly likely offenders are, the statistics governing the likelihood to cheat or become aggressive to others are part of a player’s “hidden stats”. Sometimes scouts and coaches will hint at these tendencies, otherwise you’ll be taken by surprise at the worst possible moment during a match. In a game powered by probabilities and generated outcomes, these scenarios are acceptable.

Football Manager earns a unique exemption from the normal conduct of football games. Sure, it’s licensed, but abstract matches performed by crude 3D models cause less legal provocation. Less attention is paid to the personality and likeness of the players, and more to the player decisions and the many systems. Just look at the cover art. FIFA and PES compete for famous players to put on their covers every year. Football Manager uses an anonymous figure in a suit, face cut off above the nose.

I can’t see how football games would benefit from violence, but then I grew up with these games, their own orthodoxy had been established long before I came to them. The current criteria for rule breaking in direct input sports games appears to me as such: they must be condensed into a skillful mechanic where execution is hard, and failure heavily penalized. They must be dependent on player action, not the internal whims of a virtual character. They can’t overly disrupt the flow of a game.

Some of these are solid design decisions that optimize the game’s flow. Others establish a sterile marketer’s idea of football instead of its reality. Violence is something unlikely to ever be fully eradicated from sport, regardless of official condemnation. Absolute replication never was the goal, but should sanitization be the only viable road?