“We will never reach our true potential, and we’ll never be anything more than the bastard step-child of Hollywood, until we embrace what makes us unique.”

As I’m sure you’ve noticed while wolfing down this month’s utterly delectable edition of Haywire, this issue concerns the current state of mainstream games journalism and the role of journalists within the industry. If countless hours of Skyrim have taught me anything however, it’s that you can’t hunt down a dragon without having your balls boiled by psychotic fire mages, who represent developers in this increasingly strained metaphor. And how do they threaten the land of Old Skyrim? By perpetuating the perception that in-game freedom is a luxury. But before we slay the scaly, winged beast sitting arrogantly atop his craggy perch, I confess we’ll first have to deal with the cretinous bears, bandits and bloody fire mages adorning the mountain path. Still, think of it as less of an arduous slog, more a fantastical stroll. Or just skip to the end. Lazy buggers.

Much of this perception’s circulation is owed to developers’ increasingly reverent attitude towards Hollywood, which journalists do little to dissuade. It’s not difficult to see why this attitude exists, nor is it an entirely faulted position. While gaming’s mainstream acceptance is certainly on the up, the idea that everyone’s a gamer just because your mother plays Angry Birds can feel contrived. It’s nice that more people come to accept videogames as a perfectly natural form of entertainment, but there’s still a long way to go before we are fully accepted as a medium of artistic expression.

Naturally, that’s a little depressing. It’s hard to date their inception precisely, but by all accounts videogames are now about 50 years old. Half a century. In the same timespan cinema had its Citizen Kane and reached widespread popularity, acceptance and understanding. That a person working in game development would find this aspirational, even enviable, is perfectly understandable. Similarly, it’s easy to speculate on how a games journalist might despair at the perceived insignificance of their job, when critics of an outwardly similar medium, like Roger Ebert, are publicly revered for their critique. What’s important is that these developers and journalists don’t confuse reaching the same level of respect as films with being like films.

At some point between Half-Life‘s popularization of modern scripting and now, something dreadful happened. What was once a deft pair of hands that sparked off events and controlled their trajectory has since become an excuse to demote players to the role of ‘Tag-Along Terry’, no will or initiative of their own, locked into a maniacal grip to ensure entire sequences look as cool as possible. Trust a pesky player to not stand on the exact mark they’re arbitrarily supposed to, eh?

So great was this degeneration come the arrival of Modern Warfare 3 that Rock Paper Shotgun’s John Walker declared it a “clumsy un-game,” “ensuring you never, ever feel like you’re really playing.” Admittedly, it wasn’t one of his more popular reviews with the wider internet. Still, the collective groan at the mention of how Call of Duty is crap and people are stupid for liking it is almost palpable. Its ridiculous bombast has already been covered by a great many people. Meanwhile, more subtle instances of this worrying trend have been allowed to slip by.

Set on the fictional Lingshan Islands, the first Crysis was known for being a bit of a show-off. At the centre of the game’s main island, there sits a large mountain dominating the sky for much of the first and second act, until the the entire bloody thing starts to fall apart. It’s a commanding and organic sight, a visual antidote to the dreaded C-word, the craftsmanship of a designer who understands that the player’s initiative should be retained. The vista was not forced on you, the mountain simply crumbles like a muffin in the background while you leap and punch your way through vast, wide-open levels. Of course it was still scripted, but it seemed natural. Presentation is key here. And yeah, it was a really big fucking mountain. 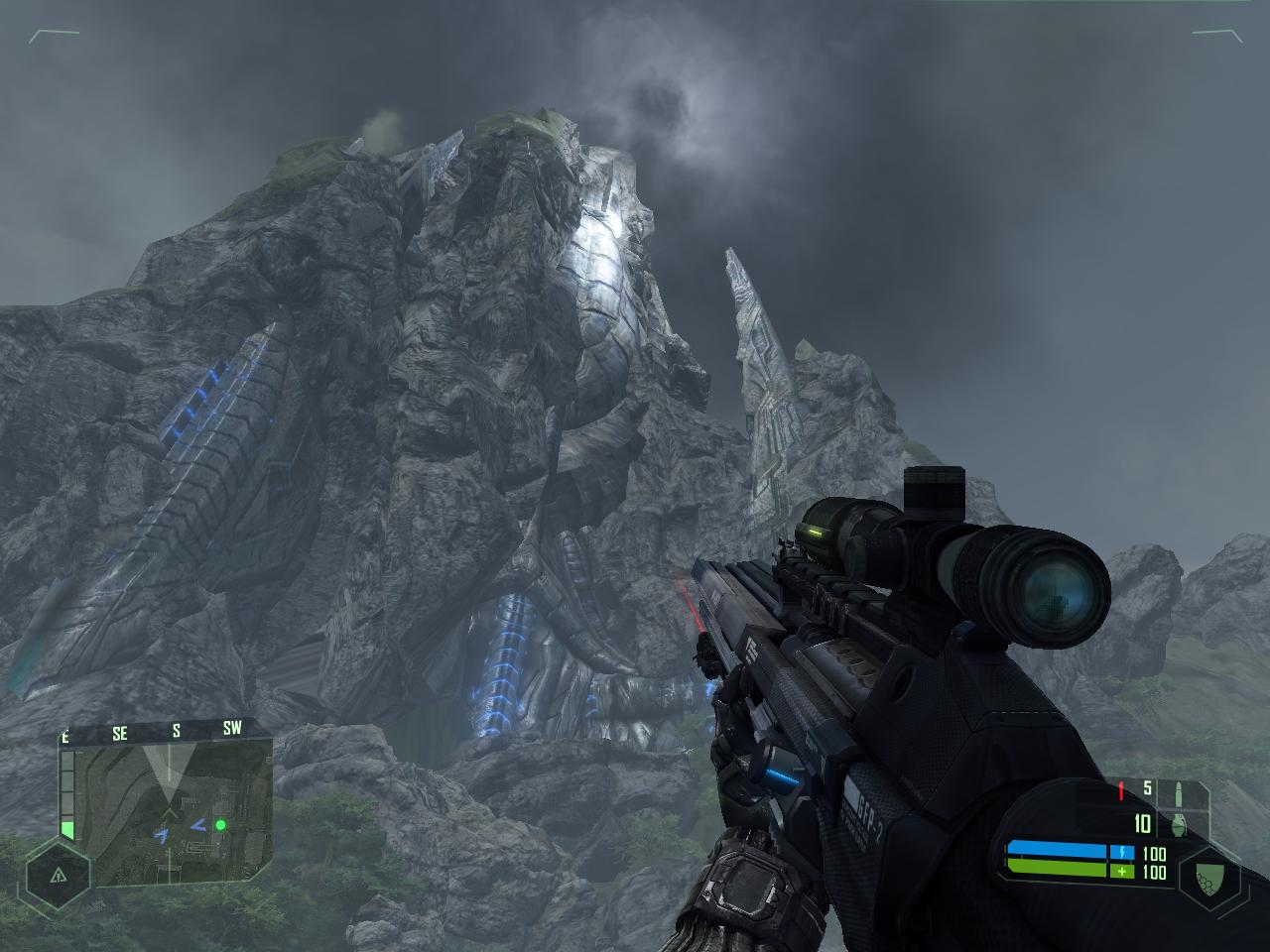 Then along came Crysis 2, and Half-Life 2‘s svelte, sensual hands were replaced with clenched fists, looking for a fight. Once the game’s first ‘Press F to look’ appears, the thin, naturalistic veil encompassing Crysis‘ Crumbly-Muff Mountain was torn to shreds. Crysis 2’s scripted background events are no more artificial than those of its predecessor, but it makes the mistake of reminding us. Now we’re being told something is happening, told to look at it. Whether you ignore these cues or play along meekly, you allow Crysis 2 to control your gaze. If a game is going to lend its players various levels of freedom, its designers need to understand that only a tiny fraction of those players will see the entirety of their work. And that’s perfectly fine.

The general critical consensus on Crysis 2 is that it’s smaller, less open and more controlling than the first, but that’s A-okay since it’s still more open than most games. Given how easily tropes from successful titles can spread across the entire industry, critics should perhaps be more careful about giving their tacit consent. Developers may be the ones devising these ludicrous attempts at streamlining, but it’s journalists who have the power to slap them on the wrist when they go too far. To ask that they’re more adamant in their lashing of these basic deficiencies to make sure a game’s negatives aren’t carried into the rest of the medium unhindered would seem a fair demand.

Of course, these are minor infractions. Awkward on-screen cues, the tendency to slow down the player during radio chatter or background events, they all speak to a lack of trust, but should they be singled out among bigger achievements and faults? In the grand complexity, magnificence and wonder of so many titles, is it really worth devoting time to three little words and a letter? Maybe, maybe not.

Still, the prevalence of these tropes is worrying. Linear, restricting games are now celebrated as our most impressive accomplishment, while games that rely entirely on player agency are seen as blissful exceptions by journalists and players alike. It’s why EVE Online is frequently forgotten when people bemoan the staleness of the MMO space, why Deus Ex held the peak of immersive simulations for over a decade and why Minecraft continues to amaze. As entertaining as the beaten horse Call of Duty can be, it’s those open-ended games that show the true potential of our medium, that editorials everywhere should be showering with praise. If we continue to neglect true interactivity, gaming will never shed the perception that we are nothing but Hollywood’s bastard child – no matter how much Angry Birds your Mum plays while sexting your Dad.