The Scripted Sequence: A Slice of Life

How Assassin’s Creed has forgotten that it’s cool to be cruel. By Ethan Woods.

Ubisoft Entertainment is to gamers as a guillotine is to a head and its body: divisive. On the one hand we’re presented with a publisher tugging at the coattails of industry behemoths EA and Activision, viewing their successes as a justification for obnoxious DRM schemes with backdoors big enough for a hacker to drive a bus through; as well as often barely functional (and always delayed) PC ports and now, it seems, yearly releases. On the other hand, they employ some exceptionally talented people, who, in the past, have produced works of considerable quality. We’re talking about games like Prince of Persia: The Sands of Time, Splinter Cell: Chaos Theory and Far Cry 2,  the latter being so bafflingly brilliant that I dislike almost every second I play of it, and yet routinely return to its golden planes as a matter of endearment and fascination.

Of course, absent from that triumphant trio is Assassin’s Creed. Now Ubisoft’s most recognized and expansive franchise, it spans a main series of games, spin-off titles, mobile games, comics, short-films and probably condoms, too. The first game’s most attractive feature was the promise of things to come, but Assassin’s Creed II famously delivered on the rich premise of a historical sandbox set within a conspiracy theorist’s wet-dream. Since then, however, the series has become something of a lumbering mass, bloated with inane, unwanted features and an increasingly meandering lore. The prospect of a new Assassin’s Creed is no longer a particularly exciting one. Worse, something infinitely more delicate, more sincere has been lost in the flood of yearly releases.

As a narrative device, the Animus was something of a stroke of genius; a pseudo-scientific virtual reality machine that was perfectly acceptable to a post-Matrix audience. While the franchise’s overarching tale of a near-future chap and his talky-walky escapades has proven controversial, the mechanic by which we are transported to the Third Crusade, the Italian Renaissance and soon the American Civil War, has never come under any particular amount of criticism. Instead, it has provided a means by which the series can move itself throughout history as it sees fit, as well as providing an ever-looming threat to the sanity of Desmond, the protagonist behind our protagonists, by way of the bleeding effect.

“But what’s the loss then?” you might ask. “Well,” I would reply with a fatherly frown,“it’s that whilst the Animus allows Assassin’s Creed to note that being part of a grand cosmic scheme probably isn’t all it’s cracked up to be, Ubisoft failed to capitalise on the inherent lack of sentimentality the Animus creates. Our chief concern, our only concern, is supposed to be the knowledge of Desmond’s ancestors. The modern-day Assassins accept this, but as players we invest weeks into these characters, so it’s inevitable that our divorce should be all the more gruelling.” No doubt I would then sigh deeply, horn-rimmed glasses gently reflecting the sunlight, turtleneck framing my strong jaw. 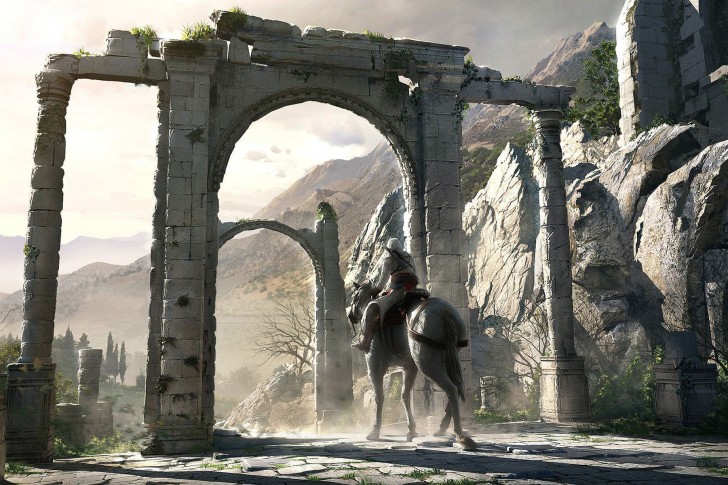 Although the first Assassin’s Creed ended Altaír’s story with a whimper so anti-climactic it was almost a bang again, it laid the groundwork for how to conclude ancestral stories for the rest of the series. Assassin’s Creed II took the idea and made it short, sharp, and brutal, setting the stage for a fiction built upon the tragedy of a string of men throughout history rubbing up against the confines of their own prescribed destiny. In Assassin’s Creed II‘s closing moments, Ezio begs of Minerva: “I don’t understand… Please, wait! I have so many questions!”.

In light of the titular creed, that nothing is true and everything permitted, which supposes that people are free to forge their own destinies, it’s a devastating and ironic end to our vengeful hero, as his own destiny is thrust upon him and then stolen away in mere moments. Concern with satisfying his curiosity is dismissed by Minerva in order to relay a message to Desmond. As we’re cruelly dragged through the matrices of the Animus and back to dear-old Des, our capacity as players to empathise with Ezio is vast, guilt-ridden even, as we leave him to seek those answers without our guidance. Our lasting image of him is a simple one: a man, in the middle years of his life, lost and confused.

Within this brief moment, we were permitted a glimpse at the twisted core of the Assassin’s Creed series, one heavily juxtaposed against the often jovial nature of Ezio’s adventure. We are forced to realize that his legacy is no heroic deed or grand achievement, but procreation. Suddenly, a series about reliving long-dead memories through DNA and stabbing people in the face had come to reflect the innately human fears of insignificance and isolation. With this, Assassin’s Creed II raised itself to a lofty perch well above the station of its predecessor. That a developer could be so dismissive of their own creation, a character written specifically as an antidote to the po-faced, unwaveringly distant Altaír, was an enticing prospect. Alas, it was quickly dispelled.

Whilst replaying Assassin’s Creed II still conveys a twinge of sympathy for our Renaissance Batman, the lingering cruelty of the Animus’ curt drop-in/drop-out reality is lost. By continuing Ezio’s story with both Assassin’s Creed: Brotherhood and Revelations, as well as a short-film, Assassin’s Creed: Embers, Ubisoft have wasted the fascinating and inherently unsentimental nature of the mechanics of their own narrative, in favor of bleeding a series and character to death. As we face a new ancestor and the conclusion to Desmond’s story, it remains to be seen if Assassin’s Creed III can recapture the cruelty.