Miguel Penabella takes a closer look at the other side of TLOU2.

Five years ago, when I wrote about The Last of Us, I examined the ties between that game and John Ford’s 1956 Western The Searchers, comparing the moral dubiousness of both titles’ protagonists who each rescue a surrogate daughter figure for selfish reasons. The Last of Us Part II follows the emotional consequences of its protagonist’s decision, locating the lingering dissatisfaction and distrust born from that act of pyrrhic rescue. Julie Muncy wisely identifies Part II as a daughter game in response to its predecessor’s fatherly themes. This game’s two central characters—Ellie and Abby—must reckon with the legacy of Joel’s violent actions and chart diverging paths as traumatized daughters. Ellie struggles to escape the pull of his violence and his emotional insularity, and the game is structured around two departures from domestic idyll.

For a time, Ellie enjoys the comforts of the walled community of Jackson, Wyoming, sheltered from the violence of roving post-apocalyptic outlaws and hordes infected by the Cordyceps fungus. Later, she settles in a pastoral homestead with her girlfriend Dina and surrogate son JJ. However, this domesticity is short-lived. She finds herself emotionally unsettled and haunted by inherited violence, and leaves her pastoral life, just as she’d earlier left the walled community at the start of the game. Because Ellie can’t settle into a normal life without sinking into trauma caused by Joel, Muncy’s central question is pivotal: “Is Ellie’s inability to grow, or develop, without in some way referencing her relationship with Joel a true aspect of her character? Or is it merely a preoccupation her writers cannot escape?” Much of the faultfinding levied against Part II revolves around the rightful criticism that the game cannot escape the influence of Joel. What many critics often under-examine, however, is Abby’s parallel narrative of emotional growth. While Abby grapples with the trauma of her father’s murder by Joel, she also grows in different directions, and by the end of the game, it’s her surrogate sibling (or even motherly) relationship with Lev that defines her character. Hyper-focused on Ellie, many critics underserve this other point-of-view in the game, as Abby’s journey provides an alternative to the misery that Ellie endures.

Through Abby, the game gestures towards new paths. Abby, daughter to a Firefly doctor murdered by Joel in the first game, leads a revenge mission to Wyoming with a small posse, brutally dispatching Joel in front of Ellie. His murder prompts Ellie to follow them back to their Seattle headquarters to kill them all in vengeance. However, Abby overpowers and spares her a second time. She then slips off to Santa Barbara, and Ellie follows. But that doesn’t play out the way she imagines it either, and over the course of roughly thirty hours of play, Ellie becomes a shell of a person. Having failed two revenge missions—one to Seattle, the other to Santa Barbara—she returns to an empty homestead vacated of the warmth and love it once housed. Abby, on the other hand, recognizes that executing Joel has left her unsatisfied. She consequently distances herself from the violence of Seattle’s militaristic faction, the Washington Liberation Front, and opens up emotionally to strangers Lev and Yara instead of leaning away. The game’s bifurcated structure split between extended playable sequences from both Ellie and Abby’s points-of-view drives this juxtaposition home. Ellie only ever has the objective of killing Abby, while Abby rarely thinks about her pursuer at all, finding peace by letting go of vengeance and freeing herself from its pull. 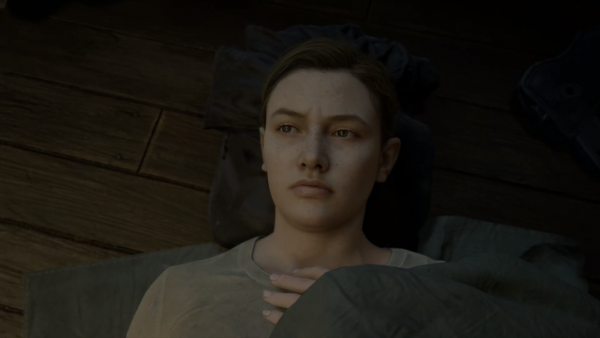 Through flashbacks, we learn that Abby once enjoyed the love of a devoted father and a budding teenage romance with her friend Owen. Following Joel’s murder of her father, Abby hardens and shuns emotional openness, turning away from a more stable relationship with Owen and losing that support system while experiencing recurring, trauma-induced nightmares. Even her vengeance in Wyoming fails to subdue those visions of herself, trapped powerless and alone in the hospital where her father suffered. Her act of violence failed to change anything within her. Gathering herself in Seattle, she still remains helplessly alone. These realizations push her to think beyond herself, making the steps to reconnect with others. As Ty Galiz-Rowe points out, Abby’s redemption arc can be pinpointed to her second day in Seattle. Abby returns to rescue runaway cultists Lev and Yara, shouldering the guilt of her deteriorating relationships after her emotionally draining revenge mission. This new storyline moves us to narrative threads removed from Joel’s actions in the first game, as Lev and Yara are completely detached from the contexts of Joel and Ellie. They too want to flee violence: the set piece that finds Abby smuggling Lev out of Haven is literally hellish, an inferno of death and carnage, and we see Abby’s repulsion for Seattle’s warring factions written on her face.

Thus, when Abby and Lev sail for Santa Barbara, they do so to flee the violence of Seattle. Meanwhile, Ellie travels to Santa Barbara explicitly to enact violence. This simple juxtaposition conveys the stark difference in emotional growth across the two characters, where Abby finds emotional support in others, and Ellie tragically runs from it. By the time Abby and Lev reach Santa Barbara, Abby’s character model noticeably displays a lighter, more welcoming body language, with a more casual stance and a warmer, smiling face. In previous chapters, Abby remained always distrustful and tense, with her constant scowl, furrowed brow, and watchful eyes, but the Santa Barbara sequence finds her radiating her youthful joy once more. By leaving Seattle with Lev, she releases any lasting grudge with Ellie and that past hurt, sailing for distant lands, putting herself and Lev back into a dangerous outside world, but discovering home in it and in each other.

Ellie, of course, charts a different route. While trapped in a violent cycle that Joel started in the first game, players discover she and Joel had vowed to take steps towards forgiveness in a crucial flashback at the end of Part II, thus casting his murder by Abby as all the more brutal because they were striving towards something good. Their shaky reconciliation is a moment in which Ellie doesn’t fully forgive Joel, but accepts that this is the reality she must try to move past so they can live in peace. This flashback reframes Ellie’s entire revenge mission throughout the game: she’s not so much exacting vengeance on behalf of Joel, but because Abby robbed Ellie of that chance for reconciliation, for salvation from the hurt that keeps her rooted in place. Her emotional immobility is partly because Ellie isn’t as successful at compartmentalizing her emotions as others. During his time in Jackson, Joel seems able to compartmentalize his past as a disreputable hunter and conceal it with his newfound role as an upstanding community figure. He has a knack for maintaining a semblance of a normal home of a middle-aged man with guitar and woodworking hobbies, who likes listening to folk records on vinyl and carefully stocking a kitchen with labeled mason jars. 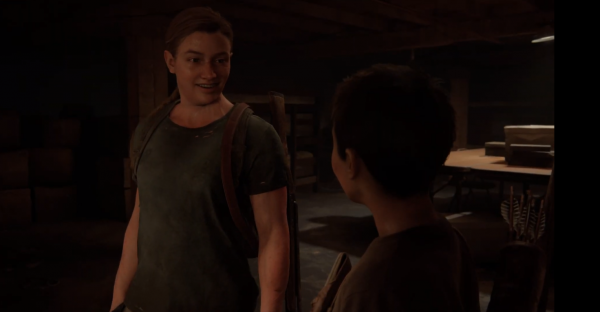 Ellie, on the other hand, shuns a normal domestic life twice, and by leaving, ultimately isolates herself from loved ones that could have been a source of stability. Unwittingly fleeing the very thing that could give her that reconciliation, she’s pursuing violence to avenge. Browsing online reactions to the game, many folks initially believed Part II would end with the stirring image of Ellie and JJ lounging on a tractor, gazing out at the sun setting over fields of wheat. But of course, it’s an illusion; Ellie succumbs to her own nightmare that transports her to the scene of Joel’s murder, descending a staircase out of Silent Hill into a shadowy void. Abby knows that vengeance won’t expel that nightmare, but that’s a lesson Ellie hasn’t learned yet. Ellie inevitably abandons Dina and JJ without a word, slipping into the night to pursue Abby a second time. Ellie only learns that crucial lesson at the very end of the game by choosing to spare Abby, perhaps because she sees that Abby herself has changed from vengeful killer to Lev’s friend and protector. But by then, it will have been too late; those closest to Ellie will have departed. This is the stock narrative of the Western, of hardened protagonists who cyclically sabotage themselves, unable to shake the call of violence.

In my aforementioned article on The Last of Us, I wrote about the final shot of The Searchers, involving its protagonist retreating from a homestead while framed through an opened doorway. This shot is mirrored in the final image of Part II with Ellie walking away from the now deserted farmhouse, framed through the upstairs window. I mentioned that the protagonist of The Searchers is depicted in this final shot as “doomed to roam without purpose, lost in the enveloping world of nature,” and the same can be said for Ellie. Through the opened window, with Joel’s lone guitar resting against the wall in the foreground, Ellie leaves the abandoned home, small and out of focus. While this final image suggests meaningful steps away from Joel and past hurt, Ellie charts an uncertain path alone, away from the comforts of a familiar household. Venturing out of a life of domesticity like she did when she left Dina and JJ for Santa Barbara, and out of Jackson at the start of the game, Ellie retreats back out into the only home that she—and we as the player, and John Wayne in The Searchers—really knows: the wilderness.