50 Cent murders his way through two unnamed Middle Eastern countries in 50 Cent: Blood on the Sand, a work that represents the maximalist excesses of videogames. Mindlessly violent and breathtakingly misogynist and racist, the game epitomizes the perfect mirror of videogames, reflecting back at us the ugly essence of all that we play. Games are the only medium to provide a scenario where 50 Cent plays himself (rather than an original character) laying waste to a war-ravaged landscape set to a soundtrack of his own music. Its absurdity borders on the parodic; from the very opening seconds of the game, I found myself struggling to control laughter. Crucially, 50 Cent: Blood on the Sand’s foundation in gangsta rap differentiates it from other third-person, cover-based shooters like Gears of War or Army of Two from that ubiquitous Unreal Engine 3 period. Its musical background serves as a new lens on military shooter games, reframing warfare as fantastical gangland violence. In doing so, Blood on the Sand’s nonsensical moments make a mockery out of videogame conventions and storytelling. From its shameless reflection of the ugliness of games emerges a crucial honesty: videogames have consistently peddled juvenile trash. It takes the farcical extremes of 50 Cent offering crude thrills to upturn the generic expectations of players, as the game equates mindless military shooters to maximalist gangsta rap music.

50 Cent: Blood on the Sand seeks to answer a single question: “Where’s my skull?” This is the oft-repeated line from 50 Cent, who is accompanied by G-Unit labelmates Tony Yayo, Lloyd Banks, and DJ Whoo Kid. 50 Cent is paid for a concert in the form of a diamond-encrusted skull reminiscent of the Damien Hirst pop art piece For the Love of God, though the skull is immediately snatched up by a mysterious female mercenary. Like Jimmy Carter chasing after the eponymous rifle across a ruthless desert landscape in the Western classic Winchester ’73, 50 Cent races after his glistening trophy as it changes numerous hands throughout the game, always making sure to remind players, “That bitch took my skull!” After this central conflict emerges, the earlier pretense of a recognizable civilization crumbles. The opening image of a crowded concert venue gives way to a burning warzone like a low-budget replica of the ambush in Black Hawk Down. Virtually no trace of civilians will be found, with any sense of logical storytelling replaced by a nonsense story in a nonsense setting overflowing with enemies. Blood on the Sand’s absurdities become comic: 50 Cent taunts a tank with “Fuck you!” before blowing it up with C4, clearing the path to a strip club (the only operational business in this war-torn country) set to his song “I Get Money.” The game never mocks or berates the player’s actions directly; its sheer level of comic absurdity and the joy derived from it renders players complicit with videogame violence so exaggerated that it becomes unrecognizable. Blood on the Sand resembles fictional representations of games in other media, like in Spike Lee’s film Inside Man: so cartoonishly violent as to be unreal, even as it anticipates real games like 50 Cent’s. 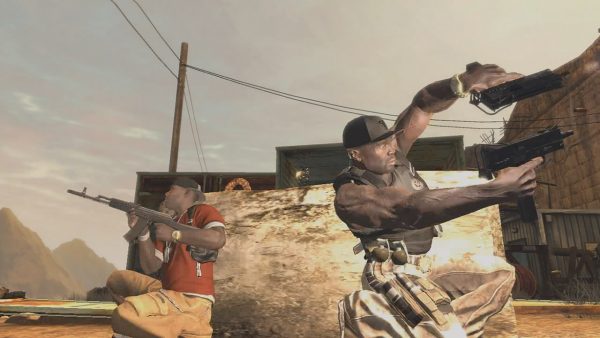 Its story is a form of fantasy. 50 Cent’s popularity was steeply declining after the mixed reception to his 2007 album Curtis and his commercial loss to rival Kanye West’s Graduation released on the same day, signaling for many a symbolic death of gangsta rap. Blood on the Sand represents in 2010 a nostalgic return to 2000s gangsta rap at its most baroque: grimy settings, sexist machismo, blatant violence, hyperbolic posturing. The game serves as escapist power fantasy specifically designed for 50 Cent, what writer Grant Howitt for Look, Robot identifies as “a love story” of G-Unit members showering their hero with undivided praise. Since the game pairs 50 Cent with one of three possible G-Unit teammates, these secondary characters never actually meet one another outside of cutscenes. Tony Yayo, Lloyd Banks, and DJ Whoo Kid thus record lines addressing 50 Cent, but 50 Cent can record all his lines in one fell swoop by responding without addressing his teammates by name. The effect is that all dialogue from G-Unit is in the service of helping or responding specifically to 50 Cent, as though they have no other interests of their own besides boosting the ego of their fellow rapper. In a new decade that has since moved on from the music of 50 Cent, Blood on the Sand functions as a glorified advertisement and fantasy revolving around the fading celebrity.

The game’s close ties to gangsta rap also frame the odd interpretation it has of videogame violence more broadly. 50 Cent is cautioned in the beginning of the game that he’s operating beyond his territory, and that the antagonists he’ll face resemble nothing like the gangsters he’s accustomed to at home. Despite this warning, all the enemies are clad in red and blue colors, thus likening 50 Cent’s assault to gang warfare and not international war crimes. The character sees enemies as little more than cannon fodder, culminating in the requisite helicopter gunner sequence where 50 Cent utterly decimates a mountainside village. The game encourages total warfare, where “destroying more structures will earn you more Gangsta Fire [a slo-mo ability],” encouraging sequences of destruction similar to other military shooter games. The difference again is the absurdity of featuring 50 Cent in a wild pursuit of a jewel-encrusted skull instead of a more credible story of a military campaign or a mercenary job. Blood on the Sand’s ridiculous stylization is alienating, and in that sense of distanciation, we can see plainly the essence of videogames. If Call of Duty advertises its games with Eminem’s “Till I Collapse,” then Blood on the Sand is what pairing playable genocide with popular music looks like in practice. 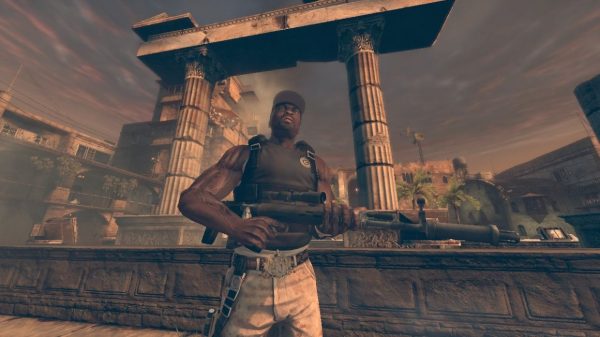 The game may resemble conventional third-person shooters, but its ugly power fantasy has close parallels with Spec Ops: The Line in particular, albeit with a meta-commentary not deliberately authored but emergent in its inherent design and imagery. Both games present familiar shooter gameplay in crumbling desert settings, but while Spec Ops directly skewers and subverts these conventions to comment on the morality of violent videogames, Blood on the Sand wholly embraces its violence, resulting in a differently sobering perspective on videogame culture. By overlaying the violent maximalism of gangsta rap atop the trappings of a military shooter, the game offers a unique perspective atypical to the medium. 50 Cent isn’t a seasoned game designer, but he has an idea of what a videogame should look and feel like, as do Lloyd Banks and Tony Yayo in a very telling interview that conveys to us their expectations of a “cool” game. They implicitly assume that enjoyable videogames are shallow, ultraviolent, and offensive. The game’s excess ties into its effectiveness as an inadvertent indictment of videogames. When we see 50 Cent slaughter hundreds of shirtless, brown-skinned mercenaries in a game, we laugh at it as ridiculous. When we see the protagonists of Army of Two or Battlefield: Hardline do exactly the same, we overlook it as the norm. The game isn’t explicitly about videogames, but its unabashed videogame-ness starkly reveals a long history of the medium’s offenses without the condemnation of any singular culpable entity.

This total embrace of ignorance and obscenity strikes me as indicative of the ways in which videogames and gangsta rap have historically perpetuated those things, albeit with parodic excess that quickly proves endearing. Chase sequences are punctuated with incidental moments that bespeak bizarre notions of what qualifies as “exciting” or “dramatic,” and this profound nonsense is a constant source of entertainment. A mysterious arms dealer named Raoul shares with 50 Cent the advice to “trust no one,” a point accentuated with the scene’s ominous score as the informant slinks back into the shadows. Seconds later, 50 Cent receives a call from his manager Anwar who instructs him to meet an accomplice, handily remarking, “You can trust him,” to which our protagonist immediately agrees. 50 Cent’s blind trust of any and all characters becomes an unintended running gag, especially when they inevitably betray the rapper, his voice acting talents straining to express bewilderment. Out of all forms of expression, 50 Cent lacks any credible emotion in this game other than rage. There’s a laughable ignorance in yelling expletives like “Punk bitch!” to no one in particular as our hero destabilizes the infrastructure of foreign countries. Blood on the Sand thankfully dedicates a button specifically for swearing, and players can spend in-game currency to upgrade 50 Cent’s ability to swear. Swearing while shooting increases the total combo points following each firefight, incentivizing players to maximize their crassness. 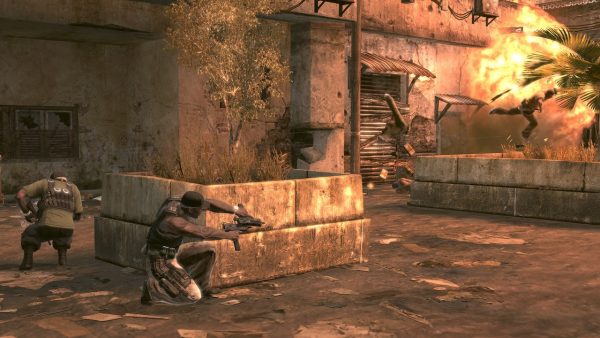 If Blood on the Sand serves as a kind of elegy to the decay of 2000s gangsta rap and 50 Cent’s late career, it still bursts with enthusiasm and energy. The never-ending soundtrack always seems to kick in at the right moments, lending heated firefights a needed sense of hyped power with bangers like “Disco Inferno” or “In Da Club,” reminding us why we loved those songs in the first place. The game has roots in superstar games like Def Jam: Fight for NY, itself a rendering of rappers like Busta Rhymes or Method Man as larger-than-life figures fighting to their own music. And despite the hellish landscape of a war-torn country under siege by mercenaries and terrorists, 50 Cent and the G-Unit crew laugh and have a great time throughout the campaign. DJ Whoo Kid in particular delivers the most enjoyable performance, because unlike the gruff affectations of Yayo or Banks, Whoo Kid sounds like he’s having boyish fun with his squeaky voice and spirited reactions. In one moment, an enemy bursts through a backdoor in ambush. “Oh goodness!” he yells, terrified. In another scene, 50 Cent muses on the importance of family and trust, to which DJ Whoo Kid halfheartedly mumbles, “Ehh, whatever.” These mundane interactions lend some personality to the proceedings, brightening the otherwise dour context of 50 Cent’s late career slump and the colorless world of the game.

Even as the game elevates 50 Cent as a mythic figure towering above whatever enemy is thrown his way, Blood on the Sand ends on a joyous note of companionship. If 50 Cent never quite recovered from the lukewarm reception to Curtis, then his steadfast camaraderie with G-Unit insists on the importance of overcoming struggle with others. The epilogue’s closing image of 50 Cent and G-Unit riding out together towards the sunset acknowledges the communal comforts of life. Even though 50 Cent’s popularity has since dwindled over time, there’s still some mindless joy to be found in returning to the outrageous excesses of both his music and his bizarre take on the shooter genre. When we acknowledge Blood on the Sand’s many absurdities and offenses, we can laugh along with them too.

Tags: 50 cent: blood on the sand, army of two, Call of Duty, gears of war, Spec Ops: The Line
← Art Tickles: The Missing Points
Off the Grid: Ladykiller in a Bind →