Off the Grid: Ladykiller in a Bind

Allison Winters is The Princess (in her own mind).

You’re going to have to forgive me if I get rather personal with all five of you readers this time around. The topic of BDSM and things of that sort are often misrepresented in the media, usually as the butt of a joke. After all, two consenting adults should be shamed for having a little fun in the bedroom, and there’s no point taking the time to learn safety. Sarcasm aside, people tend to get the wrong idea about fetishes which leads to abusive relationships and people getting hurt. Sadly this is even more true for the queer community which itself is still too often maligned and misunderstood. So imagine my delight when I found Ladykiller in a Bind, a visual novel that treats both topics with the seriousness they deserve.

I should back up, since the game enjoys flashbacks so much, and explain what I’m prattling about. Ladykiller in A Bind puts us in the shoes of a young woman, whose name isn’t all that important, who switches places with her brother, whose name is not important either.  In fact no one’s name is that crucial to the story: everybody instead uses code names such as The Beauty or The Hacker. The game allows you to choose the names from a predetermined list but allows for custom ones as well. What I called my characters shaped my perception of them subtly. After naming the student council president The Rival, I couldn’t help but feel in competition with him. For the sake of talking about the game, I used The Beast for the titular ladykiller and The Prince for her. Either way, The Beast is tasked with keeping up appearances as The Prince and not letting anyone know they pulled a switcheroo on a week-long cruise in the Atlantic. In exchange for risking her neck, The Prince covers for her at the summer school she is being forced to attend by their father. Unfortunately our Heroine’s poor knowledge and inability to keep it in her pants leads to problems of keeping her true identity under wraps.

The game forgoes any sort of exposition, and instead allowing us to gain our knowledge form the conversations. Which makes sense, as The Prince knows all the players in this little game he’s playing—exposition would make little sense sans his occasional scolding of The Beast for her lack of knowledge. The game lives on the natural flow of conversation to tell its story which is reflected in the gameplay as well. Dialogue options come and go as they are relevant to the conversations at hand. It feels like actually having a conversation with a character and not simply playing a game. As I result I grew closer to the characters and their struggles. By the end, we have a rather well fleshed out cast and world, one that we are intimately acquainted with solely through seeing the characters interact.

I’d like to really stop beating around the bush and get to the meat of the matter: sex. The game puts a large group of horny teenagers with crazy issues on a boat with little supervision so the topic is bound to come up. As mentioned above, Ladykiller in a Bind’s sex scenes, and there are quite a few, are well researched and beautiful. They explore themes of submission and consent without resorting to crude jokes or shaming the participants. As someone who dips their toes in this community from time to time, the realism is refreshing. Everything you do with the various romance options puts consent first and foremost. When you engage in bondage with The Beauty she never falters in her dominance even when checking to make sure The Beast is safe. When The Beast interacts with The Hacker she respects boundaries and only goes as far as The Hacker desires. This is important information for those inexperienced in these matters. The emotions run high in these scenes and you learn more about your partners during very charged moments. The sex isn’t here for erotic purposes, though it fulfills that niche easily, but more to show that sex is fine and doing what you like is freeing. 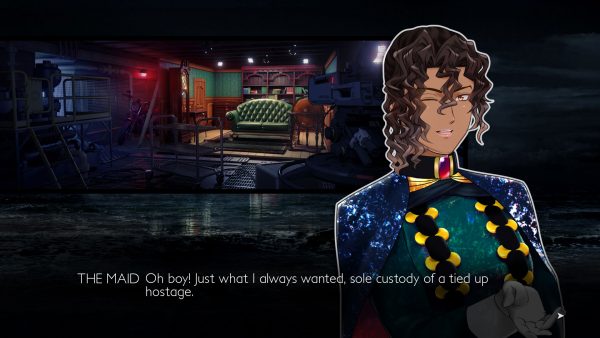 The story is all about the freedom to live your life as you want, and others’ opinions be damned. As you delve into your classmates’ hopes and dreams, many fear the same thing: uncertainty and being stuck in a hell of their own making. The Beast herself only wants to be free to ride her motorcycle into the sunset, which even she admits is just a big metaphor for being able to do as she pleases. You help them realize that the future is what you make of it, and that they should pursue what they feel is right. Whether that involves a boy dressing up as a girl to seduce his crush or a boy working to be free of a father’s tyrannical rule. It’s about seizing your own life by the neck and saying, “you belong to me and we will do this my way.” The Beast can play dirty to accomplish her goals, but the game makes the distinction that hurting people for personal gain is vile. The only person really called out is The Prince for his nasty manipulation of most of the cast for overtly selfish means, even if his goal is simply freedom. This distinction also serves to differentiate The Beast and The Prince as characters and help us to bond with The Beast on another level.  What may start out as an oddity becomes a meaningful plot point or development should you choose to pursue it.

The Beast may be one of my favorite female leads in a game in a long time. She’s foul mouthed, lustful, and just not very bright. She’s never shamed by the game for these qualities and allowed to be relatable. It’s rare to see a girl like this, where learning to settle down is not her character arc but being true to herself is. In certain routes she is tamed but not in such a way that she loses what makes her herself. She loves dressing in suits and other traditionally masculine clothing, yet this is never viewed as a bad thing, nor is it fetishized. The game’s view on gender is that, like in life your life, you determine your own path. The Beast is never seen as less of a woman for her actions or style choices. The character known as the Flower crossdresses but still asks for male pronouns because a boy can wear a dress and that’s okay too. Because hey: there is no wrong way to be your gender. I can’t overstate how important this message is not just for the transgender community but for those who simply want to express themselves without feeling guilty. I’d have loved hearing this as a young confused lass, and I hope more games weave these themes in as well as Ladykiller does.

Despite the respect it shows for the subjects it tackles, the game isn’t scared to laugh. The game does rely on nerdy referential humor quite often but never so much as to be unfriendly to those who don’t understand it.The scenes where The Beast and The Prince snipe at each other are some of the funniest and most foul mouthed sections of the game. The dialogue feels snappy and is laden with innuendo, which combined with the constantly looming threats of violence lends the whole thing a Film Noir style.  From the setting to the reliance on non committal names I feel like this game is taking place in a much earlier time period despite being set in the present. Despite this odd clash of modern day and 1930’s style, the whole project feels natural as we try to learn more about the mystery going on behind the scenes that I don’t wish to spoil. 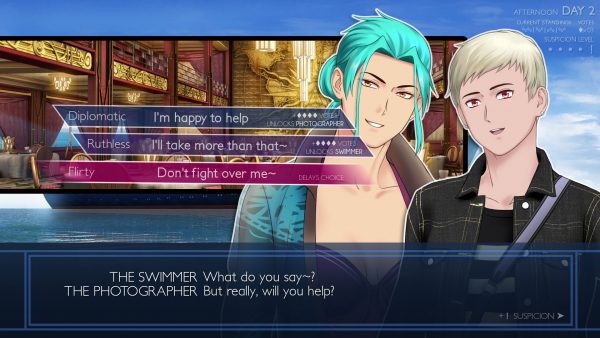 Ladykiller in a Bind is a breath of fresh air for a community that is too often just seen as a joke or a titillating mystery. Moreover, it takes it one step further and shows healthy queer BDSM relationships, something I’d like to see more of in the future. The themes of gender and sexuality it tackles aren’t addressed enough, and the game handles them in a way that doesn’t feel preachy. There is a whole other host of topics that I could bring up, but for brevity’s sake I’ll stop here for now. The quirky style of the game combined with top notch storytelling and characters make this a must buy.

Tags: Ladykiller in a Bind
← Opened World: Get Points or Die Tryin’
Playing for Real: Not With a Bang but a Winter →