Mixed Media: Lost in the Desert

How Dujanah expresses its own emptiness.

Dujanah is marked by the extensive travels of its namesake protagonist, whose tireless search for her missing family would appear to evoke a common narrative steeped in death and loss. However, in untethering itself from reality, and even its own artificial world, the game de-emphasizes human elements and instead finds its anchor in thematic meaning. Expressing desolation so thoroughly does allow Dujanah to approach something close to a human experience of loss: emptiness emitted by the game can be projected back onto its titular character, and narrative context gives the emotion meaning. Dujanah herself is reduced to an object in the process, however, completing the game’s abstraction of humanity in concepts.

The game’s randomized aspects are presented seamlessly, and challenge attempts to neatly summarize Dujanah’s events with any authority. The game begins with one such random scene, serving partly to centre Dujanah as a videogame with a creator: Jack King-Spooner himself – (abdicated) god-author of the game – shows up in a video to tell you, the lucky player, a valuable secret: the “meaning of the game”. The video only appears the first time Dujanah is played, adding to its appeal as apparently hidden knowledge. However, its “meaning” is arbitrary; Jack simply associates Dujanah with one of five words (e.g., catharsis) broad enough to agree with basically any interpretation of its events. Attempts to generalize or grasp at a single “correct” way to view the game are (rightfully) thwarted, obscuring perception and problematizing discussion. This occurs even for unknowing players, who may consider Dujanah through this apparently authoritative lens, only to learn of its invalidity following the game’s completion. (Amusingly, the presence of random events also makes this piece more obviously subjective and incomplete, which are regardless characteristics of any account.)

Dujanah’s (soon to be missing) husband and child are first seen at home, in a vaguely horrifying familial pantomime: they discuss whether either parent will remarry if the other dies; a sitcom laugh track plays at bleakly inopportune moments. More pressingly, the family hamster is found to have died, and the father and child attempt its burial in the desert only to vanish themselves. The circumstances of their disappearance (and the game’s critical path) are decided by another random event – involving either humanoid spiders or soldiers – that keeps their present fate ambiguous. The rest of the game is spent as Dujanah, traversing spider caves or army camps, in search of those who know more about (and presumably caused) her family’s disappearance. And yet no emotion is attached to these opening scenes. The game hangs on the merest pretense of motivation. 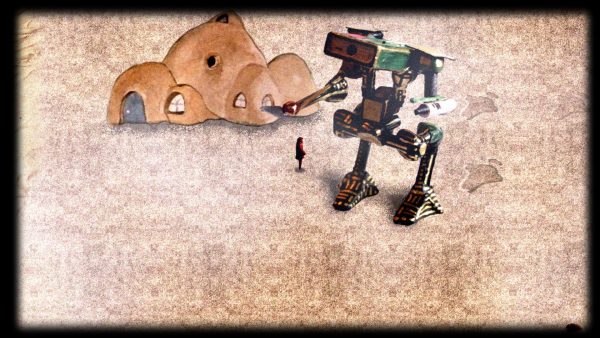 Dujanah is deliberately set in some unspecified Middle Eastern place, with a family of Muslims at its center. Yet it is entirely possible for the game to end, as it did for me, without having meaningfully drawn on either. If the setting and characters are simply used to demonstrate the common experience of loss across physical and cultural boundaries, their ambiguity is an obstacle. They are almost totally bare of character and context; they are everyone and no-one, existing nowhere. As Yussef Cole puts it, the game “tells a story not about the Middle East, but with it, and ultimately through it:” in attempting to generalize its subject matter – people, places, cultures, histories, and experiences – Dujanah becomes wholly unable to stake itself in reality. Even the loss of loved ones, a near-ubiquitous event, is not experienced in the same way by every person. This tension pulls at the game as a whole: Dujanah stays light on detail to support a theme of common experience, while featuring random events that alter the game’s context and critical path.

These random events act to overtly discourage attempts to define the universal experience or interpretation of the game, which the medium makes impossible regardless. thecatamites identifies player input itself as a site of individual difference: in-game events are uncoupled by “the yawning, unfillable gulf of disembodied time while you wait for the player to do something.” Dujanah’s vast spaces and general lack of specific direction similarly make time meaningless; only in the glut of arcade games enmeshed in the town of Touf Lajjel does Dujanah find the capacity (if only partially) to approach you, rather than the other way around. Cities of the Doomed, for example, is an arcade shooter where your shots defend against falling blocks; the game occurs regardless of player input. In Harmadillo, enemy movement (where applicable) requires an immediate response – towers rotate to fire projectiles in your direction, and humanoid creatures run inexorably towards you. Most of the arcade games are modeled on present-day genres and structures; unusual themes and visual styles reproduce the novelty of its historical equivalent (as faithfully replicating the games of the time would not). This novelty is somewhat diminished upon learning that wresting Three Arcade Tokens from the machines is plot-critical, however. In the forced play that follows, their structural familiarity begins to grate.

Regardless, much of Dujanah is stridently offbeat. Touf Lajjel’s residents, for example, speak of seemingly random topics that rarely refer to others or their environment. Each dialogue occurs in apparent isolation. As a result, the town’s sense of place is made indistinct: it is neither a real setting with culture and history, nor one with a recognizable internal logic. Jack’s appearances throughout the game – as a YouTube Personality caught mid-stream, commenting on the dullness of his own game; the artificial arcade gameshow host of Pie or Anus; a cast member in an arthouse film theater; and so on – are similarly irregular. These extraneities unmoor Dujanah even from its own fake in-world existence, just as the game disengages from reality by choosing not to adopt a specific Middle Eastern setting (and its specific culture, history, present-day issues, and so on). It is held together only by the feelings of desolation that run through each of its elements: Touf Lajjel, the town that isn’t; the void evoked by the desert’s innate physical sparseness; and the superficiality of videogames and videogame cultures – embodied in critiques of livestreaming, the genre skeletons lining the arcade, and the spiders’ desperation to attain Arcade Tokens. 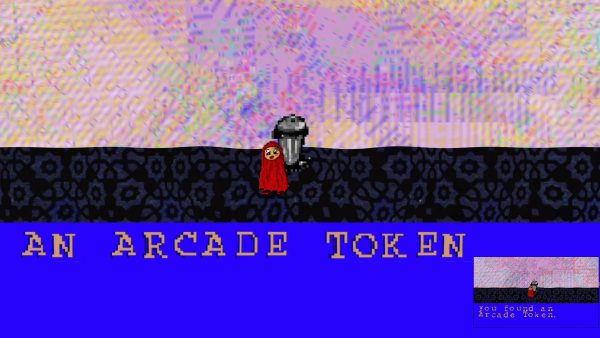 Exiting one of the more conventional arcade games produces the most whiplash: the structure, action, and intensity of a Normal Videogame is replaced by the contemplative isolation characterising Dujanah’s travels. A return to wandering an open desert, stepping momentarily into the crowd for a band who’ll play as long as you’ll listen, or musing on the tastes exhibited in the art collections of Touf Lajjel and the spiders’ lair. The “gulf of disembodied time” prevails in these spaces, creating another in turn. The more and less “passive” qualities of Dujanah and its arcade – or, perhaps, the degree to which their “play” requires a computationally measurable or quantifiable response – feel irreconcilable, even as they evoke similar emotional responses. More specifically, the struggle here is to hold both within “videogames,” a word that Dujanah seems to expose as a kind of eternal abyss, too wide to straddle or even to bridge. Their forced coexistence in Dujanah gauges the present breadth of space between.

Consider, then, the immediacy of the space within: Dujanah’s silhouette threatening to engulf the frail light of the recently-entered doorway, an extension of the shadow that defines interior space. Every act of entry is accompanied by inexplicability: just like their occupants, interior spaces feel disconnected; it seems absurd to think of them as existing within the density of a town, or even a small village. The arcade game worlds and spider caves are instead unified in their individual spatial logics, speaking to their shared (in-game) cultural function. Dujanah’s spider entities are fragile masculinities, drawn to the arcade yet unable to win tokens from its games. In reality, popular competitive videogames are increasingly impossible to win. Global, or even regional leaderboards confront players with their status – quantified skill – measured against every other player. We may yet attempt to climb the rankings, even if joining the top 10% only places us among tens of thousands of others. At least we have a place, within this sufficiently complex system that regardless operates with consistent, comprehensible logic. The spiders’ lair and the arcade game worlds are coherent spaces because coherence is necessary for refuge: you cannot find safety in the unknown.

Dujanah traverses every space as a stranger, and yet her presence is always expected. But the desert is her real and thematic home: one more coherent space, unified by emptiness. Dujanah begins and ends in this desolate locale; the camera shudders back to emphasise the gaping void, continuing unbounded in every direction. Its edges flicker and haze in film grain, casting a shroud over the text and the burial site; eventually, Dujanah herself is deindividuated in the desert’s mass. Even in the game’s completion, Dujanah’s success – the unravelling of the mystery that ties the game together – is entirely hollow. She becomes an indeterminate part of an indeterminate landscape. 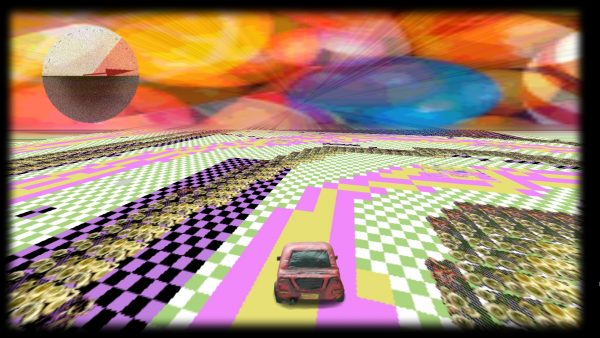