Due Diligence: Six Lads in the Woods

As the world teeters on the precipice of catastrophe, creativity remains our only viable act of defiance. Here, award-winning writer Leigh Harrison shares a work in progress poem from his upcoming anthology, My Mom Lives in the Cloud and Other Tales of Existential Torment. Using videogame narratives as canvas, the book examines radical new theories of compulsion and digital entertainment, delivered in verse for 5–11 year-olds.

In this extract, Leigh explores the moral implications of player control over both digital avatars and their adversaries. Taking a commonplace scenario from Assassin’s Creed Origins, he dismantles the internal logic used by the game to normalize virtual butchery, before allowing the scene to implode under the weight of its now inescapable preposterousness. As protagonist Bayek and other characters flail in the void, new meanings slowly emerge. They reframe our understanding not only of what it is to inhabit digital personas, but also how visceral the intersection between humanity and play can be.

Six lads in the woods

In a nook by a brook

Which runs silent and clear

(Through a forest of ladybugs, bats and deer

Lions and hippos and the odd beaver)

Sits a heartbroken man from a town known as Siwa.

Patient and strong and biding his time

His mind drifts to remember their terrible crime

As a shudder sets in he is filled up with dread:

His son is dead.

Why did they take you, Khemu,

A storm, a temple, a glistening knife

To take the boy’s life.

Who these men are, Bayek cannot say

But one thing’s for sure

They will all someday pay.

Obscured behind masks and known as The Order

From east to west border.

Manipulating the young Pharaoh with cunning and skill

They lie, steal and cheat

And when cornered they kill.

But as they’ll soon see, their power is waning

For Bayek of Siwa’s

An Assassin in training.

And so in a nook

In a cathedral of trees

Stalks a hunter of men

At peace with his means

A sword and a shield

His wits and hidden blade

Six lads down to one

When the rest are all slayed.

While it’s true that these five

Are henchmen, no more

Bayek’s hatred is is deep,

So while they are naught

He’s convinced that their deaths

Bayek stalks through the trees

And readies his bow

There’s a guard on a tower

And what he doesn’t know

Straight for his head

By the time they’re seen coming

With the lookout gone

The other four guards

Passed out in a tent

Is coming their way.

That used to be manned

The flex of a bicep

Raises up a red jar

Placing it gently beside

He repeats the process

With the woosh of an arrow

Our hero is dealing out

As the tent fire rages

The lads scream “What the fluff?

We’re on fire and dying

We’re all so shook

We sided with bad guys

Oh how we mistook

The Roman conquest of Egypt

For something that’s good

But all it’s brought to your country

Is a whole lot of blood

And now we’re on fire 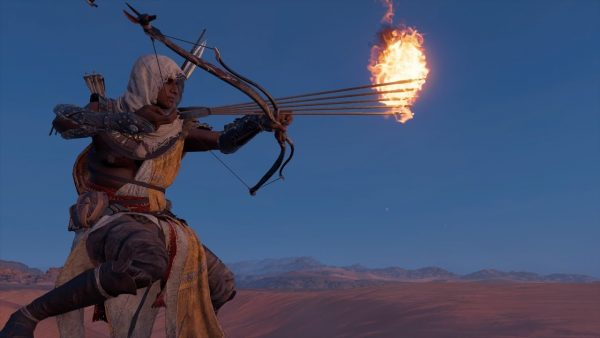 One and all they expire

He makes one for himself

From oil jars in station

But for self immolation

He burns in agony

But instead of the end,

So you can have fun

And play me some more.”

So in a nook by a brook

Sits a man out of time

He sits in his nook

And ponders their crime

Five lads in a clearing

Until Bayek of Siwa

Has again had enough.

A lad with an arrow

And four with the embers

He’s done it before

Though for our hero Bayek

But all of a sudden

There comes a great smack

As they shoot up through Bayek

Has he been here before?

As he burns once again

He starts questioning why

Why the player always chooses

That he should die

He’s the hero after all

Alongside Aya his wife

So why’s this always end

With him losing his life?

The problem is Bayek

Doesn’t know of the trophy

A way of showing

If you do things just right

You’re given a digital pin

And score both a macro

You see, the actual game

Is one of the meta

While they try to “git gud”

It’s not so they enjoy

But make a game of the game

And eventually win it

Humblebrags in the forum

The gamers need to always

So Bayek goes back

By the nook by the brook

Where it’s warm and damp

And he follows up

On his regular plan

By his own hand

As he fades and his health bar

He wonders if there’s something

He can do to stay

“If only I could pursue

But then a *ping* pops out

Across the whole room

A trophy’s been unlocked

And its name is BOOM!:

And with BOOM! comes the fabled

The game is complete

And so is the the player

The bestest of best people:

And those fluffing elephants

They vanquished its challenges

And soaked up its plenty

Is finally is free,

Except for the DLC. 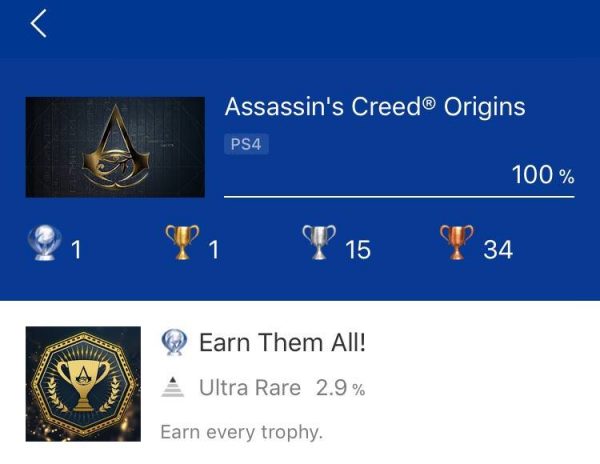 Notes from the editors

Leigh Harrison is a critically acclaimed author and blogger, contemporaneously focused on the intersection of behavioral psychology and videogames. His latest book, My Mom Lives in the Cloud and Other Tales…, explores the pressing issues of societal decline, digital emancipation and the dangers of over-reliance on technology.

His earlier anthologies, Notes from the Tin Can: Good Beer and Good Videogames Never Age Badly and Six for a Fiver: Tales of Discount Living, saw the author explore the medium of videogames through the unique lens of poverty-stricken, alcohol-fueled desperation. His most recent published work, Flower: An EnvirOntological Dissection, was called a “triumph of fanaticism” by The Observer and an “emotionally draining 467 pages of critical commentary” by the Financial Times.

A member of the videogame criterati for almost a decade, Leigh’s playful yet incisive writing has been featured on industry sites such as Kotaku, Gamasutra, VentureBeat and Haywire. He was featured that one time on the New Statesman dot com, and was named one of 2017’s #BestBloggers by Critical Distance. He has been described as a “London-based writer”, someone who “talks a lot about ‘bags of sick and poo’”, and “a good case study”. He lives, as reported, in London, with his wife and their folding bicycles. He is on Twitter.