Due Diligence: Chain of Memories, the Direct-To-Video Sequel

Leigh Harrison forgets to remember, to forget, something, something.

There’s a friction at the center of Re:Chain of Memories, that sees its ambition to interrogate experiences of loss and the nature of evil undermined at every turn by its b-tier status. It asks questions about grief, memory, and identity with an unexpected deftness. But it does so within the limitations of a much smaller budget than its predecessor, and as a spin-off title many people will never play. Donald, Goofy, and the rest of the crew might all be present and accounted for, but Re:CoM is not the glorious technicolor Disney of the ‘50s, rather the small-scale, direct-to-video Disney of the ‘90s. It is a fascinating game not in spite of its limitations, but because of them.

The first Kingdom Hearts tells a very simple story, really. Underneath all the extended monologues about the Heartless (bad guys), stealing hearts (peoples’ essences) in order to open Kingdom Hearts (the source of all life), it is a coming of age tale. 14-year-old protagonist Sora, along with his friends Riku and Kairi, long for adventure away from their secluded island paradise. When they do find it, they discover that the adult world is cruel and uncompromising.

Through a series of struggles, they each grow as individuals and ultimately mature. But the transition from childhood to adolescence costs them dearly. By the game’s end, they have saved the world but lost each other. Physically and emotionally separated, the three friends are left to wonder if their relationship will ever be the same again.

Re:CoM begins straight after KH and further explores, if not outright answers, this question. Sora and his pals Donald and Goofy happen upon Castle Oblivion and go in search of the missing Riku. Inside, a mysterious stranger mysteriously tells them that “to forget is to remember, and to remember is to forget.”

As they venture deeper into the castle, which houses recreations of Sora’s memories of the events of KH, Sora begins to remember a long lost friend, Naminé, whom he knew as a child. They played together, along with Riku and Kairi, before she suddenly disappeared one day and was buried in the depths of Sora’s subconscious. She is a stranger to him and yet, after learning she is being held somewhere in the castle, Sora becomes fixated on finding her at all costs, taking priority even over the search for Riku.

As he presses on, further and further into his own memories in search of Naminé, he loses his grip on the past. At first, he forgets small things like the order of events or a place’s name. But later, whole chapters of his life, and eventually his best friend Kairi are gone. To forget is to remember, and to remember is to forget – mysterious dude wasn’t messing around.

There is an obvious parallel with dementia here, and the onset of Sora’s memory loss is handled with grace. As his confusion turns to bewilderment and eventually anger, the game takes its depiction of the symptoms of neurodegenerative disease seriously. There is a tenderness and genuine sadness to Sora forgetting his loved ones, and I’m not made to feel frustrated or angry at his inability to remember what I can, but rather am encouraged to mourn his losses. 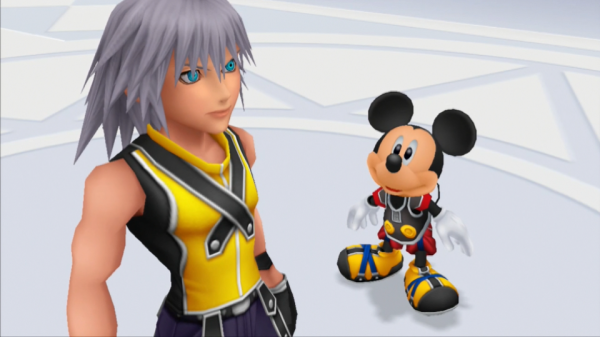 What is more troubling, though, is that he chooses to inflict this upon himself. Throughout KH, one of Sora’s main motivations is to find Kairi and ensure her safety. He eventually accomplishes this by the end of the game, and although they are separated by a great distance and might never meet again, she’s at least safe. Sora’s pursuit of Naminé, however, threatens to erase all memory of this struggle, of the deep fondness which compelled him to risk his life for someone he loved.

This reaction could be handwaved as being merely a product of Sora’s nascent maturity; his childish impulse to discover the truth at all costs. But it belies another aspect of his personality: his belief that the women he cares for need protecting. Sora, at this stage in the series at least, is quite the benevolent sexist. Despite evidence to the contrary, he sees Kairi as defenseless and in need of his constant protection. It is this same conviction which colors his search for Naminé, and makes him willing to forget Kairi so readily. Sora doesn’t lay it all on the line because the women in his life need him to, but rather because he needs to have a purpose.

Elsewhere in Castle Oblivion, Riku searches for Mickey Mouse but instead finds his own doppelgänger. The evil Organization have built a mechanical clone and imbued it with his personality, creating a Fake Riku, or FRiku, if you will. He’s sent out into the castle believing Sora means Naminé harm which, when combined with his own pathological need to protect women, leads to a lot of fightin’. The men in KH are all “act first, ask questions later” kind of guys.

Sora and FRiku each pose questions about the importance of memories in defining a person. Sora does not remember his past, but repeats past actions nonetheless. He rushes to rescue Naminé, a complete stranger, as willingly as he once did his lifelong friend, Kairi. FRiku, with his grafted personality, has similarly-driven urges. He doesn’t know why he is compelled to protect Naminé, he just does. Both characters are motivated not by rational or even emotional logic, but deep, primal impulses they have no control over.

Here, Re:CoM is again exploring the series’ favorite preoccupation: the heart. The first game used it as a metaphor for strength of character, à la light side/dark side dichotomy, and here that conceptualization is expanded to include our entire nature. Re:CoM makes its beliefs clear: the heart ultimately trumps our memories, our learned experiences. In the kingdom of hearts, nature is invariably stronger than nurture.

This thesis, in turn, reshapes the framing of good and evil in the series. In KH, people do bad things to get what they want: Jafar, power; Hades, power; Maleficent, power. Each harnesses darkness as a means to an end – they use it but are not of it. Re:CoM, in arguing that our nature wholly defines us, positions good and evil not as something pragmatic or learned, but as instinctual. It threatens a future for the series where evil exists for evil’s sake. Where bad guys aren’t cackling Disney villains out to rule the world, or even Heartless intent on bathing it in darkness, but nihilists willing to destroy it outright. It’s a pitch black turn for a series that started out as fluffy Disney/Final Fantasy fanfic. 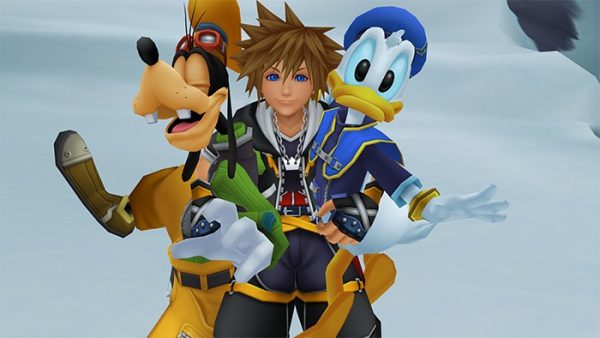 While Re:CoM’s exploration of memory is fascinating on a narrative level, it isn’t on a mechanical one. The conceit of Sora reliving his memories basically boils down to replaying most of KH. Level design, environmental assets, enemies, boss encounters, even the Disney stories themselves are directly repurposed from the first game. It’s a clip show, basically.  The narrative veneer is there to justify why, but it doesn’t distract from the curiously budget feel, which seems at odds with Re:CoM’s lofty preoccupations.

The Walt Disney Corporation has always been a savvy distributor. Beginning in the ‘50s, it re-released its animated classics into theaters roughly once a decade, ensnaring each new generation in the comforting glow of its moralizing whimsy. With the home video explosion of the ‘80s and ‘90s, it did the same with the Disney Vault, a fictional place deep within Disneyland Paris, of all places, where its VHS cassettes were held hostage, save for a few months every decade when we were allowed to rescue them with our cash.

Alongside these good tapes, the company distributed literally thousands of direct-to-video movies. These low budget sequels to its proper pictures lacked the quality, budget, and Disney magic of their predecessors. They were often drab and derivative, hollow approximations of their predecessors. On the plus side, though, they were available to purchase year in, year out.

Like these films, Re:CoM never feels like a complete entity. It is too reliant on its predecessor to stand alone for its duration, and once that’s up it proves itself to be largely meaningless. At the end of Aladdin, the evil Jafar is imprisoned in a magical lamp and buried in the desert for 10,000 years. Agrabah is saved, Aladdin wins Jasmine’s hand, and Genie is set free. All is right in the world. Aladdin’s direct-to-video sequel, The Return of Jafar, upsets this equilibrium by reinstating its title character as arch villain, but only for about an hour. After that, he is once again disposed of and things return to as they were. Nothing has changed.

At the end of Re:CoM, Sora has his old memories restored and his new ones wiped. To forget is to remember, and to remember is to forget. And so while the game itself is interested in the intersection of instinct and experience, nature and nurture, it must also take its place within the series at large. It is allowed its dalliance with these themes, but they must ultimately be forgotten and equilibrium restored. Chain of Memories might be the sequel to Kingdom Hearts, but it is not Kingdom Hearts II. It is a direct-to-video videogame, replete with all the freedom and limitation afforded to something that can never truly matter.

Tags: Kingdom Hearts, Re:Chain of Memories
← Off the Grid: The World Next Door
The Pokémon Center as a Non-Place →