Off the Grid: The World Next Door

For most of my time on the planet of Emrys, I was enthralled by the rich and beautiful world filled with characters I could easily grow attached to. I was enjoying the simple plot that was hinting at something much bigger. Yet when the time came, my victory felt hollow. Sure the main character made her way home but all the smaller plot threads were left hanging. The World Next Door left me feeling like I’d played half of a game.

The World Next Door’s handling of queer characters is phenomenal. Too often a LGBTQ person in media is solely defined by that one trait and it’s dehumanizing. Yet here we have a major  character, Liza, who dates people of her own gender and it’s not given special mention. It’s a part of who she is; not a plot point or her entire gimmick. A good portion of the cast are playing around with gender nonconformity and it’s mentioned casually, in the finer details or in background conversations. The game lets these characters be people first, and it feels good to see this type of representation.

The world of Emrys feels full and defined, as opposed to just a video game locale we have to escape from. It’s set up as a parallel world to Earth yet while Earth took the path of technology, Emrys relies on magic to run.The player is given insight into the culture and how Emrys has developed over it’s long history. We see how the various races interact, albeit from a teenage perspective. So many details that will have no bearing on anything besides building up the world itself. Is it relevant that Emyrn people enjoy baseball or that they have people who are giant nerds about Earth? Not really, but it helps flesh out the world. I enjoyed helping out my Emyrn friends less for the useless trinkets they would offer as rewards, and more for the chance to learn something new, maybe a tidbit about the various shrines, or something about them as a person.  The detail woven into the characters made my new friends truly feel like friends. Leaving these people felt bittersweet, like there was so much left to say. 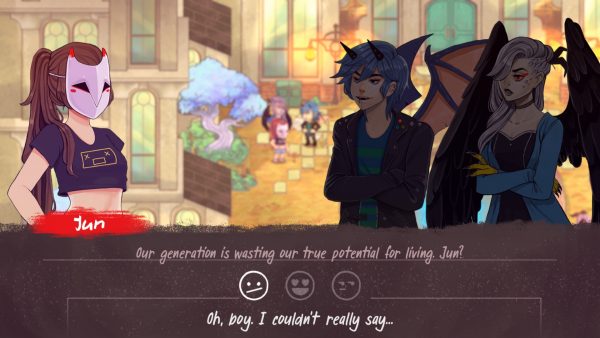 The amount of detail poured into the short time spent on Emryn is astounding. The developers even spent time making a language for the game! The world feels like a place that could actually exist. Despite all of this, I have a hard time recommending The World Next Door. The game just ends with very little resolved. The main plot feels as if it’s about to take a major step forward, and then it’s over. I don’t regret my time spent with The World Next Door and if it gets a sequel then it has the potential to be an excellent series. But as it stands, it’s like ending a review mid sentence and that’s just-