Due Diligence: If I May Be Frank

Leigh Harrison catches himself in the scattershot.

The problem with writing a monthly column about videogames is that you have to write about videogames every month. Life is all about schedules, but there’s something a bit off about putting creativity and critical thought into the same box as grocery shopping, tax returns and bowel movements. Inevitably, structure becomes stricture.

In my own God-awful existence, this often means filing copy I’m not entirely happy with. There’s a certain “set it and forget it” quality to the way we produce content today, but even if you’re able to stop caring once you’ve published, the minute-to-minute dread of making something you don’t like just because of a deadline is horrible. It might only be a thousand words that turn into two with the inclusion of easily misunderstood (and so dismissed) asides, but in the moment the creeping dissolution with your own ability is hard to live with.

Ideas are great and quite often easily chanced upon. But fleshing them out to a marketable length can ultimately dilute the whole affair. So in a nod to the virtues of brevity and acknowledging that eight hours with a game doesn’t always necessitate a screed, here’s a concept I nicked from the superlative Tevis Thompson.

The joy of the slasher movie lies in seeing people you don’t like die.

Videogames are all about winning.

Until Dawn disrupts both by asking you to keep detestable people alive by not failing punitive QTEs. It’s possible to press square and avoid a character’s decapitation, but the timing is such that you’ll certainly lose people to poor reflexes.

Herein lies release. Once heads roll, the fragility of the characters becomes apparent. Unavoidable failure breeds compassion, but also absolution. Some will die, that much we know, so just do your best. Winning and losing are refreshingly meaningless—we just get by.

That “it looks and plays like its on Xbox 360” is a good thing. An adventure game where you play a spectral detective accompanied by a sassy teenager who sees the dead. Collect clues. Talk to spirits. Endure misguided stealth sections.

Murdered is the sort of mediocre we rarely see today because games cost either $5 or $500 million to produce, not $20. It is an anomaly.

It’s a pulpy, clunky, middle-tier experience that exists within its means. Viewed on its own terms, it accomplishes what little it sets out to achieve. Better, then, than most marquee titles ever muster.

The only game I’ve ever “platinumed”. Played it for 60 hours, I did.

Mechanically, it is fantastic. If it were purely a robot dinosaur hunting experience, it would be a huge success. In the same vein as Halo, its encounters are “combat puzzles.” The player is given tools—both owned and improvised—and asked to overcome increasingly stacked odds using only their knowledge of the game’s systems.

Grafted on top is the pointless story and busywork questing that typically constitute videogame structure. Both distract from the sandbox hunting sim Horizon should be, and remind that snazzy mo-cap can’t make limp narrative engaging. 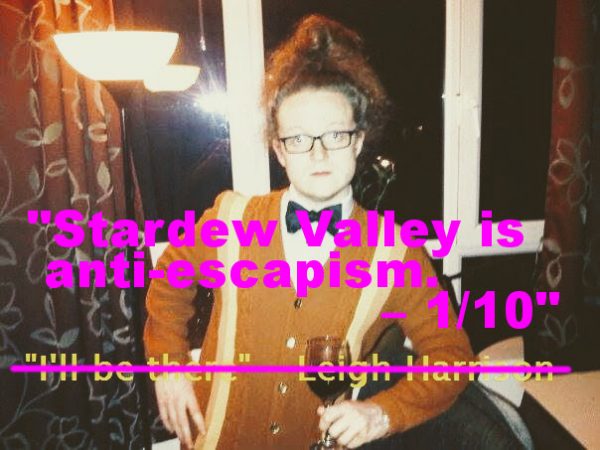 I’m too young to have played either System Shock, so I appreciate this spiritual successor.

That Prey was criticised for being derivative shows how lacking in self-awareness we are. Uncharted 4 is okay because it expands upon a formula, but a modern take on a series that descended into simplification of mechanics and politics is unacceptable?

The Ouroboros of game design is laughable; nothing is sacred. We need reminding.

There have been two proper Deus Exs and one Shock made in two decades. I like terminal hacking, vent crawling, box stacking, and slowly upgrading. Please leave me to my fun.

At the beginning of Stardew Valley, your dying grandpa tells you to escape to the countryside and run a farm “when you feel crushed by the burden of modern life.”

It might get better after more hours, but the five I played were torturous. Stardew Valley is anti-escapism. It fails because it’s more boring than the burden of my modern life.

I haven’t got a clue what Jazzpunk is, so I suppose it’s a success inasmuch as that.

Part adventure game, part walking simulator, part showcase of bad humor. For every mildly amusing reference to ‘90s pop culture (a beach turtle that spits out a pizza and pair of sai when slapped, lol), there’s a Quake non-parody or a character mumbling like Johnny Depp in Fear and Loathing.

Star Wars can go fuck itself, so Jazzpunk was fairly lost on me. 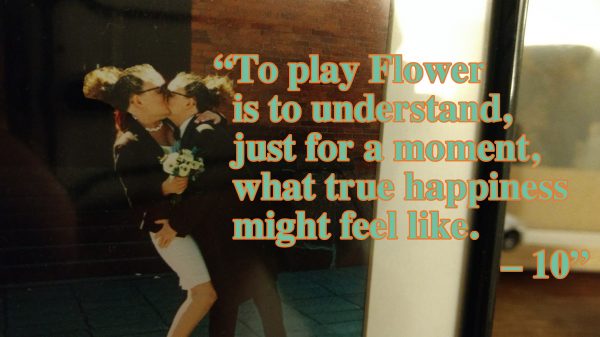 Rarely do I let technical hiccups inform my opinion of a game. It’s pedantry.

But when New Vegas corrupted a save and forced me back three hours—a common occurrence with Creation Engine titles—I lost my bottle and quit soon after. Suspension of disbelief is necessary to enjoy games, but the threat of New Vegas collapsing in on itself and disappearing altogether was too daunting for me to stay emotionally invested.

I spent 50 good hours in its darkly comedic, morally fluid world. In the Wasteland, people come and go, live and die, so not seeing the end was quite fitting.

Daredevil acrobatics only work if your controls and physics aren’t utter shit.

The draw has always been the craziness of its grappling hook/parachute combo. It purportedly gives players the freedom of movement to do anything, but controls are imprecise and physics seemingly Lunar. Badassery descends into farce—paragliding into mountains, or flying 200 meters after carelessly stepping into traffic.

It wants to embody spectacle, but Just Cause hasn’t managed to make its untenable, broken central conceit viable in its three iterations. Its mechanics just don’t work properly. They never will.

It’s Goat Simulator without the grace to own its failures.

Flux is the series’ main preoccupation. Spaces, times, people and objects drift from form to form. Recognisable characters, places and items create a sense of continuity and security, only to ridicule our need for such things as they transfigure beyond recognition before our eyes.

The “cube” in the title is manifold. Your prisons are four-walled rooms. Cubes are represented as visual motif and maguffin, and later puzzle, solution, and ethereal antagonist. They permeate everything, watching always.

The consistency of aesthetics and intent is staggering. 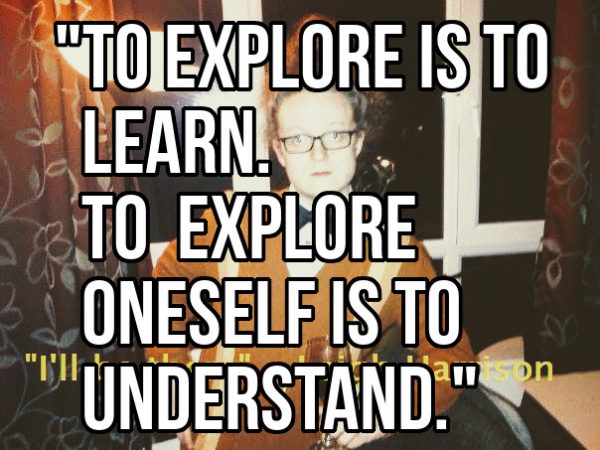 The good stuff I’ve put out over the last two years at Haywire encapsulate my knowingly wanky personal tagline for the series:

“Deep dives into the hidden in plain sight.”

What if Assassin’s Creed harbored a secret meaning? Has consumerism ruined critical thought? Is boring always bad? Can a fictional account of a camping trip be games crit? What about a true account of a focus group?

They rarely display a conventional approach to discussing games, but for good reason. This is a column, not a series of discrete articles. There’s a voice running through the lot, pulling everything together.

But a month-to-month continuity can derail the best of artistic intentions. It’s hard not to spin out ideas that previously worked into aberrations with too many thoughts; stories within stories that make the page sag and contort.

Sometimes the preoccupations you want to discuss aren’t even related to games, and you end up saying “fuck you” to readers and weave in tangentially related paragraphs to satisfy your wandering mind.

Or you try only talk about mechanics for once and hate how boring it is.

To write like this is to be totally open. I invite you inside me every month.

The Little Corridor of Horrors – 6

This talk encapsulates everything I try to achieve when discussing games.

“The creative process with anecdotes” thesis isn’t academic or particularly thought-provoking, but a room of 40 people listened, and laughed when they were supposed to, for its 15 minute duration. In my eyes, that’s a success.

Having many different voices talking about games is crucial. Sociologists, anthropologists, designers, psychologists, testers; angry, thoughtful, sarcastic, even shrieking YouTubers; journalists, critics, hobbyists, English literature or film majors; whoever. We need them all.

I’m just a northerner living in London who gets mistaken for a woman an awful lot.

But hear me out.