Due Diligence: Our Clumsy Hero

Look at that first Assassin’s Creed trailer. Or don’t—I’m going to recount it all anyway. An assassin, a silent assassin, stands atop a bell tower. He takes stock of his surroundings and quarry. The bell tolls. He is gone. He makes his way carefully through the crowd assembled in the historically accurate square, blending into his surroundings as if he were a midday shadow. He moves into position and then strikes. Crossbow bolt to the guard on the left, killing blow to the guard on the right. Now he’s in the perfect position to fulfill his duty. His generations old duty to The Creed.

A blade, hidden within his right-hand sleeve, extends from the assassin’s wrist, severing the trachea, carotid artery, and jugular of his target. As the mark bleeds to death from unrecoverable injuries, the assassin escapes across the rooftops, finally descending to hide among a group of similarly dressed monks, before vanishing entirely. The mission is both a practical and aesthetic success.

Playing any Assassin’s Creed is always a rodeo between your imagined suaveness and the technical limitations of interacting with Assassin’s Creed. The series was damned from the start by computer-generated trailers like this, which imply that its hitmen (and much later, when the technology had caught up, hitwomen) could ever be as faultless as proper assassins—the ones we see in films.

Comparing film with games is often gauche, but here the comparison actually holds water. The best cinematic assassins, like Uma Thurman in Kill Bill, Forest Whitaker in Ghost Dog, or Pierce Brosnan in James Bond or The Matador (those with taste opt for the latter-dor), possess the physical dexterity and mental foresight to kill people in ways that look dramatically effortless, and then get away clean afterwards.

Stealth games, too, ask us to do the same thing, and in some corners of the genre—Metal Gear, Thief, Splinter Cell—this can occasionally be achieved by investing levels of dedication normally rewarded with a namesake celestial body or campus library. But Assassin’s Creed has never been a part of this cadre, thanks mainly to its insistence on being much more open than its corridor dwelling brethren. There are too many variables within the Assassin’s Creed games and their insistence on open worlds, and so their stealth inevitably descends into farce.

Their city spanning environments are so big, so filled to the brim with interwoven systems, that there’s always something broken. Avatars forget how to move like silent killers, often preferring to gyrate against brick walls or do that “grab your ankle” dance in the middle of historic piazzas. Characters are emptied of their clockwork humanity and left to stand about, glassy eyed and rubbery. Enemies pogo up and down on precarious ledges like characters from gruesome anti-drug campaign ads. Faces explode. Horses fly. Hope dies. Confusion prevails. 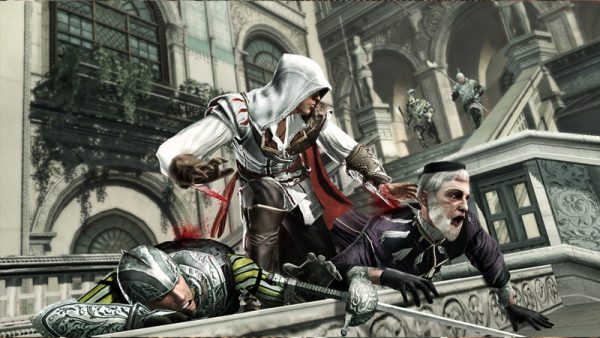 But what if that’s the point and has been all along? In our rush to be always saying something profound about the games we’re playing, celebrating the unapologetic crassness of them is looked upon as unfavorably as breaking out sound, graphics, and replayability in review scores. Assassin’s Creed has an unashamed and readily visible ridiculous side, and that shouldn’t be overlooked. Don’t let the “a diverse group of cultures, creeds and races made this game in harmony” splash screen fool you into thinking it’s a serious piece of po faced cultural commentary. That’s merely a holdover from the first game filling the Holy Land with evil brown people and wanting to head off any criticism at the pass, just like a casual homophobe, some of whose best friends are gay, would. No, Assassin’s Creed exists to remind us all that games needn’t be serious or indeed legitimately good to be deemed worthy of our time.

In what other game, and I wish I could find a clip of this because it really happens, would a protagonist assuredly declare he’ll “fix up this brothel and get it back in business!” as if any human being has ever uttered those words, in that order, in such a way, at any point in history? In what other game would the eradication and replacement of a street gang by another, player controlled street gang be deemed a positive development in the lives of the denizens of a large municipality, something to be celebrated at length and finally mythologized? In what other game, especially one ostensibly about the disciplined art of silent murder, would it be categorically impossible to kill key antagonists quietly? Assassin’s Creed pitches reconnaissance and infiltration as periods of necessary stealth, but the denouement of major missions, the actual bloodlettings, are showy, explosions of blades, bombs, and guns in plain sight as players are forced to jump out of the shadows and shout “gotcha” as they stab a Bad Man to death in the face.

Assassin’s Creed makes so little sense, even in the woefully nonsensical world of videogames, that we all must be missing something. Some unseen truth that, once discovered, would reconfigure our understanding of the entire series, the whole world, perhaps.

A fortnight ago, I happened upon one of the people who churn out these games, and they kindly verified my longstanding suspicions. What was strange about our meeting, beyond me finding a lone Montreal-based game designer in a pretense-free Turkish breakfast spot in north London, was that the individual in question was so happy. We hear all sorts of horror stories about developers, especially those wedded to big games, being run ragged to the point of physical and mental withering. But he was beaming with delight as, in between spoons of hearty shakshuka and glugs of herbal tea, he told me about how making Assassin’s Creed is so damn fun.

“Have you ever seen the film The Two Faces of January?”

“What, you mean the 2014 romantic thriller starring the impossibly talented—”

“Not to mention handsome,” interjected the designer, already knowing I was talking about leading man Viggo Mortensen.

“—starring the impossibly talented and handsome Viggo Mortensen, the one where he acts awfully irrationally?” I concluded. “Yes, I have.” 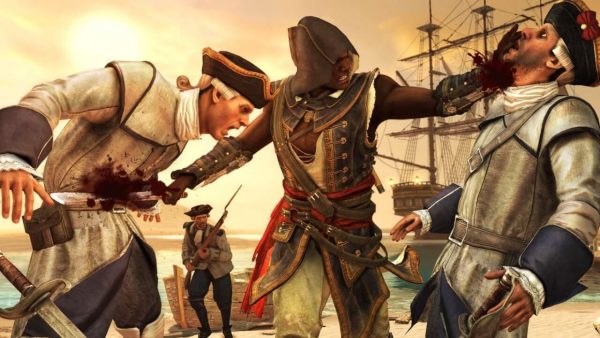 “Well, we watched that years ago and based the whole Assassin’s Creed franchise on its narrative ethos. You know what I mean, right?”

“Yes,” said the developer, “and when did you realize the truth?”

“There’s a scene where Viggo gets wrecked on scotch or brandy and falls down the stairs, then he gets up and drinks more until he passes out.” The designer smiled, knowing what I was going to say next. “I realized then—” I paused, savoring the moment before I uncorked the secret knowledge like one of Viggo’s treasured liquors, “that Viggo Mortensen’s character is perpetually drunk throughout the movie, and that his ridiculous actions and unpredictable behavior are simply symptoms of his addiction to—”

“EXACTLY,” shouted the talented designer of almost a dozen assassin-based action adventure videogames. “And that’s the ethos we try to capture when making an AC. Not that our characters are drunk, per se, but that there’s an underlying, not immediately visible motive to their behavior. They might be assassins fighting a war that spans centuries that now involves technology allowing them to travel into computer generated recreations of the past, but the minute-to-minute games aren’t about that. They’re not about that at all!”

“So what are they about?” I questioned, unable to fully grasp at what I was being told.

“They’re about people, real people like you and me, or Viggo in The Two Faces of January, just trying to get along in life, to deal with their stuff and move forwards. Look at every part of the games and ask what they all, collectively, mean. Everything’s in there for a reason.” 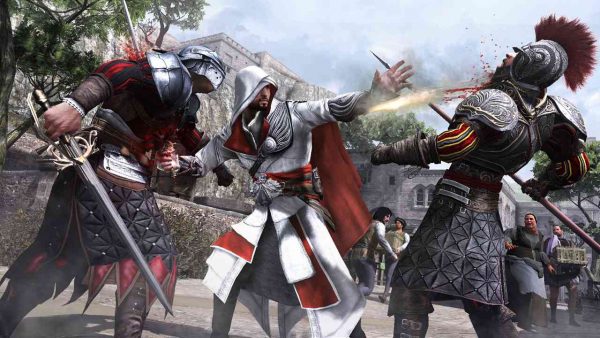 Suddenly, the Big Ben bell of the scale model of Elizabeth Tower, a patriotic feature of every home, business or public building, even those owned or run by immigrants to the great melting pot city of London, tolled. The game designer was gone. All that remained was the bill for his £7.23 breakfast, which I looked upon as a small price to pay for what I’d just learned.

The Assassin’s Creed revelation of that fateful morning has stayed with me, haunted me, even, and I’ve been able to think of little else since. Why do we expect game protagonists to be talented beyond reproach? People who don’t have the capacity to stub their toe, bump into a table, slip down a short flight of stairs, or defecate all over themselves after a lengthy period of heavy drinking. The closest we get to our avatars being out of control is Nathan Drake regularly almost falling to his death—and even then it’s only in service of his irrepressible need to quip at all times. Everyone is a professional in videogames, because games are always about being or becoming the best.

It is clear to me now that Assassin’s Creed seeks to upset this long entrenched convention, but knows that just coming out and saying it would be bad for business. Games don’t sell on the promise of us playing as an incompetent. “You are Jacob Fry, trainee assassin. He’s not very good at being an assassin—yet. But what he lacks in credible murder skills he more than makes up for with determination, patience, and good humor, things you’ll also need in spades if you’re to enjoy Assassin’s Creed: Pratfall.” It just doesn’t really jump off the shelf.

So instead, Assassin’s Creed pretends to be a legitimate and serious videogame. It has become a celebrated franchise, admittedly just by virtue of existing for so long, by upholding this generic hegemony. On paper, we’re highly skilled assassins just doing our job. But if you heed our newly gathered information, it becomes clear that we’re not. Every failed jump, every glitch, every logical breakdown is predestined, and they all play into the slowly creeping realization that Assassin’s Creed is deliberately flawed. The games are clumsy, mechanically and narratively speaking, not because they are bad or overreaching, but because they are drawing attention to the fragility of the human being and the monotony of big budget videogame design.

Marcus Fenix, Solid Snake/Big Boss, Lara Croft, Pierce Brosnan. All are the unbeatable protagonist capable of taking a skinful of bullets. They’ll never fall off a wall, or fail to assassinate a mark at close proximity, or drown themselves, or jump into the path of a train, or trip themselves up over their own feet. They are unbelievable perfection. We should celebrate the Assassin’s Creed franchise for subtly, over the course of a decade, championing the layman. Their protagonists are just ordinary people in extraordinary situations, making their way through life from one paycheck to the next. They aren’t superheroes, but people like you and me. Regular people who sometimes fail, but still get back up, dust themselves off, and try to do their best, whether they’re killing someone over ideology, parkouring across rooftops, or, indeed, fixing up a brothel.