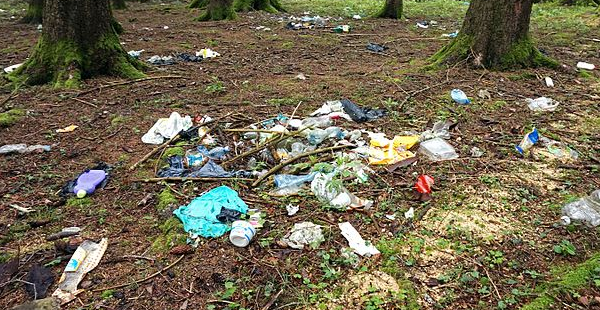 I spent the Christmas break, as I have done every year since I was orphaned in a freak laundryroom accident aged seven, holed up in an abandoned Winnebago™ Minnie Winnie­­® RV in Derbyshire’s Peak District. Because I spend my summers busking, playing Pearl Jam covers on ukulele in various faded English seaside towns and the rest of the year doing odd jobs for slum landlords in London, I like to take myself off into the wilderness as December pulls to a close and celebrate what little I’ve achieved over the preceding 12 months.

There was slightly more to rejoice over this year, as one of my employers inexplicably gave me a £250 Christmas bonus, and so I decided to finally upgrade my cellphone to one with GPS and 4G to help while away the hours walking the back roads of England. Feeling extra festive as a result, I invited a few friends to join me in my seasonal ritual. After the initial spate of shocks wore off—namely that I choose to vacation in what would be considered inhumane conditions even by the standards of a Chinese shopping mall zoo, and that I’d expected my guests to do the same—everyone settled in for ten days of merriment.

When I’d bought my new phone I was immediately drawn to an app called Geocaching, which is a sort of digital scavenger hunt made for people like me who spend 50 weeks a year essentially alone. The app contains a map of your surroundings showing you all the places that contain a hidden “geocache”. You use GPS to guide you to a “cache”, and then search around in the underbrush until you find it. These caches could be disguised as and contain anything, but are normally just watertight plastic containers filled with keyrings and a log to sign saying you found it. Even still, it appeared like a wonderfully exciting way of spicing up the monotony of hiking from one transient job to another or, indeed, staving off the cabin fever inherent in spending the holidays with other human beings.

After an evening settling into the wilderness with rum chased with cheap red wine, I woke everyone up early so we could test out cache hunting, and, given that by design there’s nothing to do in the Winnie®, my houseguests all agreed to join in. We initially opted for some low hanging fruit: a cache that was a mere 150 meters from my abode. How could this be? I’ve spent 20 years in these woods and know them like the back of my hand, yet never once have I seen anything resembling a geocache. We followed the GPS as we weaved between the boughs of the ancient evergreen forest, until my cell vibrated gently to inform me we were close. The excitement, at least mine anyway, was palpable. 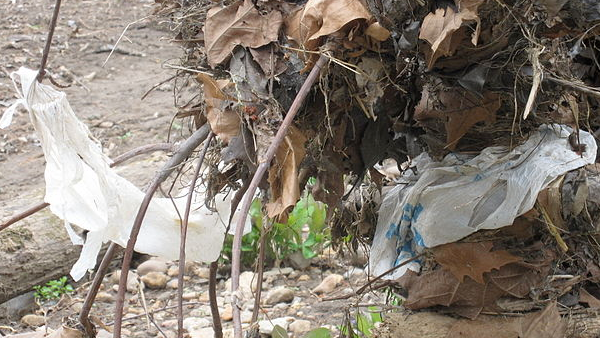 We looked around, dumbfounded as to where the cache might be. Straight ahead of us was an old but well maintained drystone wall, the sort that displays a level of engineering prowess and care you only really find in rural parts of the UK, while all around us were the slender trunks of douglas firs, their reddened bodies reaching into the sky—pillars of a cathedral to the Celtic deity of forests and, fittingly, alcoholic beverages, Sucellus. “Where is it? I’m cold,” enquired one of my chums, the majesty of our surroundings evidently lost on her. I passed the emergency bottle of vodka, in this case supermarket chain Morrisons’ own brand, Morrinov, which seemed to placate her.

Stumped, I reached for the clue that accompanies every cache. “I’m oft an impediment to where you go, but within me your prize, search deep and search low.” The wall! The cache was hidden in the wall! I scrambled around its base and quickly found a deep hole about the width of my arm. As I reached around inside, careful not to disturb the matted remains of spider webs encrusted with dead leaves and insect husks, my hand came upon a small plastic canister, the kind you’d buy camera film in before it, like Morrinov, was discontinued in the mid 2000s.

As I began to carefully withdraw from the wall, I realized I’d become caught on something deep within its stony orifice. “Bring me the Morrinov! Quickly, I need its liquid strength!” I screamed. But my friend didn’t hear me. She was stood nearby silently swiping at her phone, engrossed in Pokémon Go, which offers a far inferior implementation of Augmented Reality technology than Geocaching. “The Morrinoooooov!” Silence. I cursed her ignorance and flailed violently to free my arm, channelling anger into the cold slabs of rock until they relinquished their death grip. The moment they did, the wall collapsed and shed the secrets of its interior, which had been hiding the entrance to an underground grotto about the size of my own adopted Winnie®. On the dirt floor lay a mattress draped in tarpaulin, while all around it sat extinguished candles, crushed cans of special brew, soiled pornography, and thin plastic shopping bags filled with vomit and excrement.

As I gave a sigh of relief at still being alive I gazed down at the hard-won canister in my hand. In the excitement of the find I had, understandably, failed to notice that my arm was now covered up to the shoulder in the assorted human effluence. “Oh my,” coughed my female companion, before throwing her vodka up everywhere but into one of the many conveniently placed plastic receptacles. Knowing the cache site had been hopelessly compromised but not wanting to ruin the experience for other cachers, I signed the log and replaced the canister as best I could, before we stole away in hasty retreat. 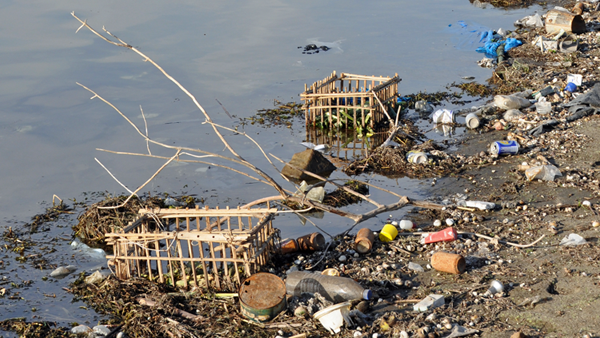 During the ruinous night roasting surimi seafood sticks and swilling MD 20/20 that followed, I tried to find out what had gone so horribly wrong that no one would consider Geocaching again. “We all thought it’d be a lot more like Pokémon Go,” was the general sentiment around the campfire. “In Pokémon Go you just walk about on your normal daily routine, and every now and again stop and catch one of the little pocket monsters by swiping your screen a couple times. You do this over and over and over again, hoping to eventually catch ‘em all. What’s really cool is that all the different Pokémon live in areas suitable for their type: like you’ll only find the water Pokémon Magikarp by rivers, or the fire breathing dragon Charizard in London Underground stations. Some Pokémon are even specific to certain continents, so you’d have to spend literally thousands of pounds on travel to complete your collection.”

I looked at the group of people sat around the fire with confused disgust. “And why is any of this a good thing? Pokémon Go is barely a game, more a passive timewaster designed to part you from your cash with exploitative design and barely disguised artificial scarcity. What about all the microtransactions, all the egg incubators and poké balls you buy? And those ridiculous vibrating watch things you’re all wearing? You’re being exploited, you know that, right?”

“Oh no, mate, it’s not that at all. All the microtransactions do is increase your investment, quite literally, in the game, and so when you catch or hatch a rare Pokémon the rush of adrenaline is so much sweeter. We’ve all nearly completed our Pokédexes, which is a massive achievement. All you found Geocaching were bags of sick.”

It was true, I did only find bags of sick and poo, and jazz mags, and discarded alcohol containers, and the remains of a shattered life on that fateful morning in December. But I look not to what those things are, but to what they represent: human experience, shared vicariously through technological wizardry. But my friends could only see revolting piles of expunged waste, because they have been conditioned to ignore the world around them. Pokémon Go exists on top of our own reality, not alongside it. The people playing it, their heads down, headphones on, blindly walking into traffic and off the sides of bridges, don’t see anything beyond the private, sanitized world the game creates for them.

Pokémon Go, just like most videogames, is about isolation; about madly acquiring intangible goods because we’re told having more stuff than other people is good for us. Geocaching asks us to dig deeper into our surroundings by allowing us to see previously hidden narratives and experiences. Bags of sick and poo represent countless chapters in a story that has no end, one written by the comings and goings of people who will never meet. I’ve since found many other caches in the north London area, always in the vicinity of the heartbreaking paraphernalia of alcoholism, drug abuse, and homelessness. Some caches are decades old, containing logs signed by people who stood in my shoes before I was even born. I’m always, without fail, overcome by a sense of kinship when reading them, as if I’m connected, even if only for a second, to a lineage of people willing to look directly at the stark realities presented to them. 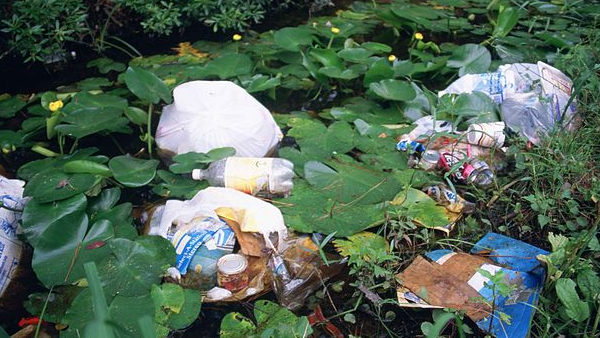 The world is often an ugly, unforgiving place, especially in our failed free market, trickle down, deregulated hell of a society. Geocaching represents the agony and the ecstasy of the human condition: unseen bags of sick and poo surround us at all times—we’re drowning in them—but so do compassion, kindliness, and community. Many of us simply choose to ignore both extremes. Just as my friend couldn’t see the wood for the trees that day in December, so too do most of us, in our modern malaise, fail to acknowledge the inexorably linked beauty and ugliness of the world, content instead to shield ourselves from the complexities of feeling with the safety of self-imposed emotional mediocrity. So get out there and find your own truths. Grab all the sick and poo you can get your hands on. Touch it. Smell it. Taste it. For only then will you be able to see clearly and begin to fully appreciate the beauty of life.

All images from Wikimedia Commons. Credits: