Visitors from the Red Zone

Andrei Filote has the gun.

The ghostly woods of our fiction were real, and terrors dwelt within them. Devils and fairies were gatekeepers of a world man had no power to control, whose awe and mystery inspired both ritual and myth. We exorcised them. The death blow was light cast from the hand of man, metaphor of the power of rationalism. But the ghosts never really went away and neither did our fear of the dark. That instinct is here to stay, and so are the stories we tell because of it.

Remedy Entertainment are purveyors of such stories, masters of genre and weird Americana. Stylization, affectation, absurdity, and camp are their trademarks. The styles of other masters are baked into their products, be it Frank Miller’s scratchings of Dashiell Hammett in Max Payne or the King x Lynch authormance of Alan Wake. Beneath it all, there’s the conceptual bedrock: The Twilight Zone. So dependant is the Remedyverse on the venerated show’s brand of dark epiphany and strange invaders that it creates a surrogate for it in Night Springs. In a tongue-in-cheek moment, a character pitches the story of Control as an episode titled Visitors from the Red Zone.

Control is the coda among Remedy’s products, the phase when the author feels safe spelling out the abstract powering their work, a bullet riddled mission statement about a woman who fights interdimensional sound-viruses with the furniture. The game packs together the company’s most used tropes into a universe where each past story (Alan Wake is an unsolved case) comes with its own over-redacted dossier. Imagine a repository of the quaint Americana that everyone underestimates but that no one forgets: the stuff of American Gods, where human belief powers divinity and turns merry go rounds into totems and gun factories into temples. Nooks and crannies open to extraordinary places, but each of those has an element of sheer-faced mundanity meant to say the Twilight Zone could be hiding in your closet—in the ordinary. And the very literal town of Ordinary, USA, is where Jesse Faden, the character whose skin we inhabit, is from.

The town and its inhabitants, save two, vanish. Dylan Faden enters the custody of The Federal Bureau of Control, an agency that investigates paranatural phenomena. Like any self respecting bureaucracy, they have their own term for this:  Altered World Events (AWE). After a lifelong search, Jesse tracks her brother to the Oldest House, the Bureau headquarters and the biggest AWE of them all. The OIdest House is an infinitely tall, smooth, faceless, concrete tower or cosmic pillar, where the Bureau hosts such facilities as Interdimensional Research, Parapsychology, and a power plant that draws energy from the coffin of a former director. Jesse takes the player into a new world, the antithesis to her Kansas, where, anti-antithetically, federal employees labor at their day jobs, and finds the Director’s role thrust upon her. 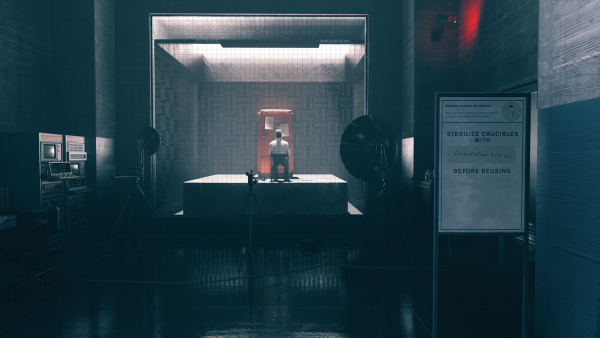 So much is expected of the Director, yet all it takes to become them is to pick up a weapon. In a crisis, the job is janitorial. It’s cleanup work. And one of the outfits you will work hard to earn will be a janitor’s. Behold Control’s monsters: a traffic light, a refrigerator, a chair in the shape of a hand, a rubber duck. Incarcerated garbage as dangerous as nuclear waste but ambling and willing. Even the rote gunplay, ultimately not much evolved from Max’s heyday, lives next to uncanny powers of levitation and telekinesis. Obtaining a floppy disk on which are written the launch codes to the Soviet Union’s nuclear arsenal unlocks, what else, the mechanic of launching objects. We throw chairs, vases, recliners, boxes, TVs, clocks, pieces of the floor— in short, those objects that are so unremarkable they’re practically invisible next to the Bureau’s eccentricity.

The Oldest House is indeed old, both in the game and in our fiction, unfolding like a haunted house extended to extravaganza, an intemperate right-angled church of Odd. Deadly, patient, mercurial, not just amenable to change, but changing moment to moment, making its rigid brutalist outline into an organic mould. A beehouse. Corridors open to new dimensions, spilling out oceans and sharks. Floors, rooms, doors, elevators—these are optional concepts manifesting for the sake of inhabitants who are themselves an optional feature. We explore a room taken over by a self-replicating post-it and its clones, we nurture plants who visibly improve when spoken to, visit a completely normal cafeteria, but also face jail cells where homicidal kitchen appliances wait for the worship of human beings. By necessity, they worship in shifts.

An inverted pyramid stands at the center of The Oldest House, the most explicitly abstract image in the game. Known as the Board, a paranatural shadow partner of the Bureau, it speaks/communicates, in symbolic dualities, sandwiching its message between word pairs that work as explicit/implicit levels of the same statement. As if working through a language too inexpressive to contain the meaning it intends, the Pyramid/Board will never say you are fired, but you are fired/terminated. The communication isn’t a puzzle for you to solve. It’s texture, a glimpse into the Pyramid’s alien existence. The dual layer also works as a metaphor for the words as puncture mechanism, trying to staple one reality to the next through its singular message. It works first through the Hotline, a bright red rotary phone that, practically, connects to the Pyramid/Board, but, in essence, represents the act of connecting. Second, through the Service Weapon, a firearm whose smooth-faced exterior is drawn in solid black quadrants that pull away (they now look like dark chocolate toffees) and reorganize into different guns. There’s really just the idea of a weapon, like the flashlight that floats on a beam of light to Alan Wake when he has to fight darkness itself. This Service Weapon morphs to become the user’s imagined tool of violence, a shapeshifting Excalibur. Its first role is ceremonial, selecting, by way of Russian roulette, the next Director. 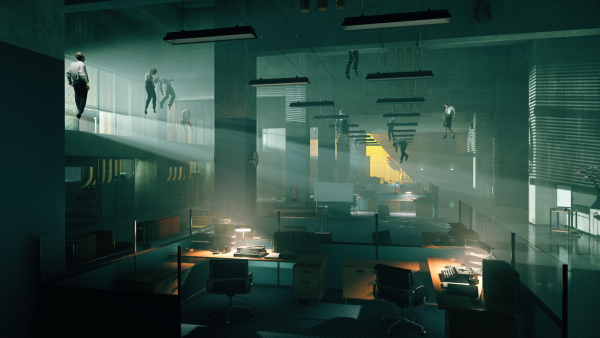 It’s with similar violence that the game’s main antagonists, the Hiss, unleash hell in the Oldest House. Like the creature from The Thing and the necromantic virus of Dead Space, the Hiss are a being/community that seeks love and identity with the world, but with dubious understanding of the emotions and indeed existence of an other. This solipsistic drive to consume is a drive to become, the sign of parasitic monsters who interact with reality in a way that reality doesn’t necessarily enjoy. Remedy are weaponizing an elemental fear of illness: the Hiss using us for breeding space. Sickness is invisible body horror. It lives in us at this very moment, an endless carnage in which overambitious bacteria are digested alive by wandering macrophages. One day one of them will get through. We will be their hives. The Hiss are a depiction of that invasion.

We first meet the Hiss through the harmless among those it possessed. Office workers, researchers, executive staff, bureaucrats. They float in the air in unnaturalistic poses, strung up by a force unknown. And they speak, together, rhythmically, incessantly. The croon is always there, a profoundly creepy nonsense poetry advertising itself. You never get used to it, this memetic possession filling now floating coffins with unearthly chant. The Hiss live inside their hosts, but not in the way cancer does; instead, they replace their prey with some dark astral simulacrum. Try to remove the Hiss from a victim and nothing remains.

What the Hiss really want is your attention. They live in your ear. They speak as much as they warp, killing only what can actively oppose them. They want to spread and spread. They’re represented, in a loading screen animation, as dark red bile sloshing against the edges of the screen. Like tainted blood under a microscope, bubbling up, the very picture of infection.

Control holds in its brutalist concrete wire mesh a red bosom of warmth and terror. The warmth comes from its familiar gunplay, rhythms of assault and delay, beats in the silence of empty cubicles and under-undergrounds. (The sound design is as disciplined and measured as anything you’ll ever hear. The music a slow wind-wind-wind, climb-climb-climb, press-press-press into the negative space of an emptied room, an emptied gun.) The terror is more conceptual than imagistic, manifesting less in the danger redness of Hiss infestation so much as in the peace of their chanting. In the implication that you could want it, too. The warmth depends on the terror as much as the violence couldn’t exist without the invader. We go into the dreamlike red, shot in the way of Lynch or Winding-Refn, so we may unwrap a nightmare in its light. It’s elemental, the red of danger. We want to go into its inviting glow. Perhaps you have woken unsatisfied from a nightmare. It’s because of that feeling that stories exist. It’s why Control exists, because—like it or not—the world is more interesting when there is a lack of it. 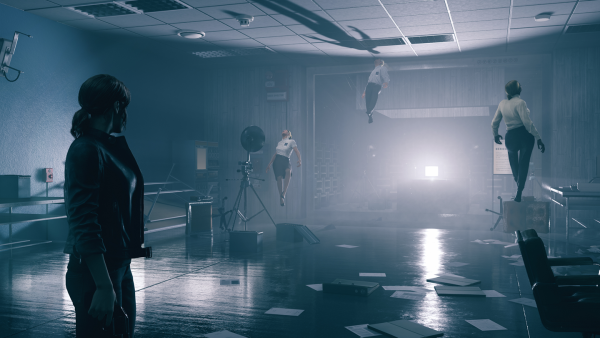 Horror trapped in mundanity is a new concept, the fancy of an age of safety removed from the danger of eye parasites, guinea worm, and vivisection-by-bear. We created a better reality, but somewhere in our gut we knew it was a more boring one, and, in the age of positive science, our hunger for nightmare struck back. Dracula bared his fangs. Poe’s Raven came a’knocking. The Mountains of Madness began to show on the horizon. We needed to believe there was a danger other than sticks and stones, that there was still magic in the world. By the time The Twilight Zone arrived, the first factories had been belching poison into the atmosphere for two hundred years, but the workers still went home, gathered ‘round, and enjoyed a story of the unknown. But that was in the glow of TV sets. Now it’s with mouse in hand that we surrender control.

Andrei Filote lives somewhere between the Alps and the sea.  He writes about all things games. You can tweet him at @letominor.