When I finish a game that has an elaborate narrative and a meticulously developed world I usually start over immediately. The second go-round is to pick up on the things that passed me by the first time, to go through the game with more experience and skills, to look at the game from the perspective of what I now know. In some cases the game explicitly accommodates this, providing the option of “new game+” where one can relive the game keeping not only the experience one acquired as a player, but also all of the tools and abilities accrued within the game itself. In conjunction, game’s difficulty adjusts to match – the trivial tasks in the beginning of the game adjust to your level at which you begin the new round.

But most often I don’t care about escalation. I’m just stuck in the game-world and unable to let go, wanting to stay there a little bit longer.

When I started Death Stranding I fell in love with its world almost immediately. Its poetic nature where instead of the rain there is a timefall that accelerates the decay of everything it touches; its terrain so barren and emptied of inhabitants and yet lush with the color of plants, trees, and mud at the same time – all of that together sound like a recipe for a great place to stick around, to explore, to return to. Yet for some reason I can’t make myself to want to stay there.

What makes a place one you want to return to? 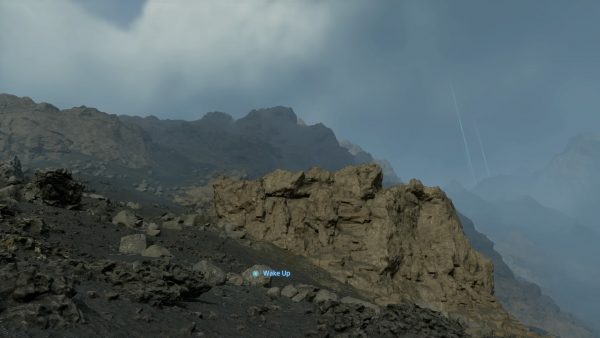 Some peaceful sounds or noises or clicks or murmurs

The draw of a game’s world doesn’t really depend on the tone of the place, whether it’s a hopeful, optimistic, detailed and beautiful place, or a place filled with gore and despair like the the world of Mad Max for example – it still gives us a place to find peace among the dread, and the pleasure of being blissfully bored.

To postpone my parting with the world I follow any thread that isn’t the main one. When the story is particularly dramatic and is full of twists and turns and difficult choices, I will avoid the main quest as long as possible and will look for serenity in chores and side quests and accidental events that make the world alive. Skipping the dialogue, I find peace in repetition. 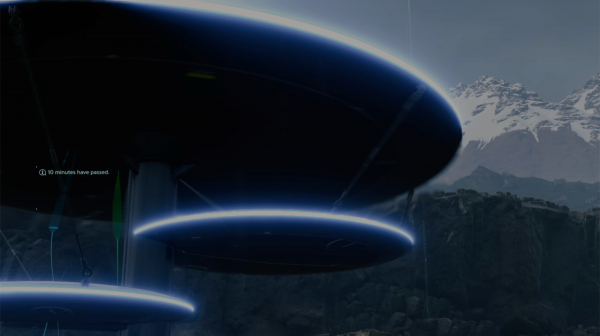 It’s interesting how the lore of Death Stranding relies on the notion of time. One could say that time is your main opponent: condensed in the form of rain it ruins your cargo and signifies the danger close by.

This altered flow of time, skewed by the extinction, is set against the repetition of deliveries that look and feel completely the same, leaving no way for you to measure time — cyclical reiteration with nothing to signify duration.

There is no change in seasons, only in terrain and shifting weather.

There is no day or night, only constant diffused daylight equally spread among the richly textured terrain. The space of Death Stranding is set after time itself, in the world after the catastrophe, in this momentary simultaneous coexistence, amplified by the invisible presence of other players  scattered among the X numbers of copies of the game sold by this day.

Submerged into the narrative, time no longer advances the world, but the hours I spend playing slip through my hands while I chase recognition as the coolest delivery guy around. It’s as if I fall into the gap between these meaningless actions and the appealing world. 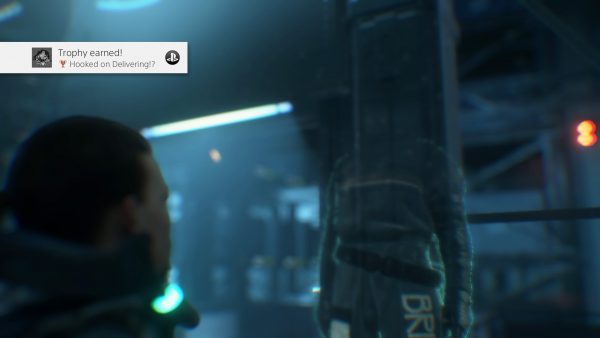 As time goes on, the beautiful terrain, the 4PM light and the terrifying creatures fade to the background, and it’s impossible to ignore the harsh, cruel architecture of the distribution centers and knot cities. My time spent in the game has become centered around them, play feeling more like labor, while I am reduced to the function of distribution of goods concealed in the blank steel cases. My contribution is always praised, but it doesn’t affect the world visibly. And even building the shared infrastructures like roads, or zip-lines, only undermines the landscape even more. I am stuck in the world but not voluntarily, and thus the repetitive actions aren’t as rewarding anymore.

I can’t connect to the side quest or stories, although the game is focused on making connections — there is just no place to dwell, just to take a shelter. I slow down closer to the end of the game, feeling burned out with endless deliveries and repeating obstacles – I become reckless and disinterested: I rush through BT territories on my trike and knock out terrorists left and right with ease. Blissful boredom has been tainted by grim working conditions and never-decreasing demand for the goods. Finally I want to escape, to go somewhere familiar. 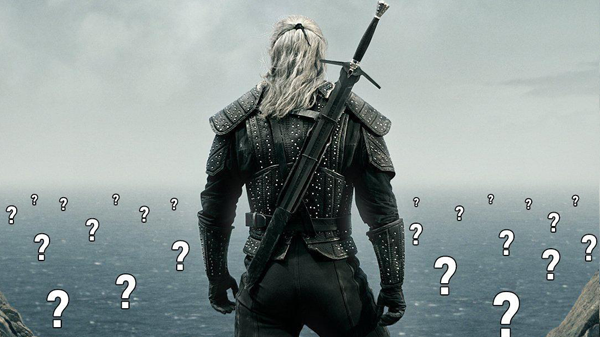 And around time I finished Death Stranding, Netflix released The Witcher TV series, further expanding that beloved world into a transmedial universe. This sweetly choreographed cinematic pill of familiarity fueled my urge to buy Witcher 3 yet again, this time on Switch. This pocket version of the game was my silver sword for anxiety: I again followed any possible thread but main one, once again found peace in doing chores and contracts, in random fun meetings, in the repetitive motifs of NPS.

I was torn between finishing a new game, or falling back into the long known one. And when I finished DS I didn’t want to return to that world. We parted on good terms, yet something was missing. Instead I wanted to return to the beginning of the game, to that feeling of novelty, when I hadn’t explored the world yet, and hadn’t overwhelmed myself accidentally with all of these side deliveries and dropped cargo contributing to my rapid burn out.

Tags: Death Stranding, The Witcher
← The Righteous, Musical Violence of Ape Out
Visitors from the Red Zone →