The Subversive Humanism of The Witcher III

Harry Mackin argues Geralt is a dad who slays monsters—not a monster slayer who’s a dad.

Like many fantasy roleplaying games, The Witcher III has chosen ones, monsters, magic, and terrible evils to overcome. Unlike many fantasy roleplaying games, The Witcher III is not about these things. Instead, it’s about people. A lot of fantasy stories use their characters as a means to the end of high adventure: The common trappings of fantasy storytelling function as shorthand, a way to quickly understand characters so we can get on with the dungeons and the dragons. The Witcher III flips this script.

Each of The Witcher III’s characters ostensibly fulfills an archetypical role—the outcast monster hunter, the chosen one, the haughty sorceress, the unstoppable evil—but they aren’t defined by these roles. The history and lore of the Witcher universe serves as a backdrop to meaningfully explore the relationships that are the real point of the game. The characters are defined by these relationships: how they feel about each other, why they feel that way, and what these feelings motivate them to do. You aren’t just playing the role of “the Witcher,” you are playing Geralt—father, friend, lover, and decent person. You’re not just supposed to do what he does, you’re supposed feel what he feels, to experience what it means to be a part of his world.

Virtually every element of The Witcher—the people you meet, the quests you complete, the choices you make—is constructed to impart these experiences, in order to endear you to the world of The Witcher and the people who inhabit it. By making their player part of the world they created, not a force standing outside and above it, CD Projekt Red uses fantasy roleplaying to create empathy in a way unique to narrative media.

The Witcher III draws attention to its focus in an interesting way— two different stories unfold in tandem throughout the game until they intersect in the end: Geralt’s, and his adoptive daughter, Ciri’s. Of the two, Ciri is the character you’d expect to be the protagonist. She’s a princess and heir apparent to the Nilfgaardian Empire, and also the last Child of the Elder Blood, which means she was born with special magical powers. She’s a character in the tradition of chosen ones from any number of fantasy stories—exceptional characters cast out from the worlds they inhabit by both their powers and their destinies. 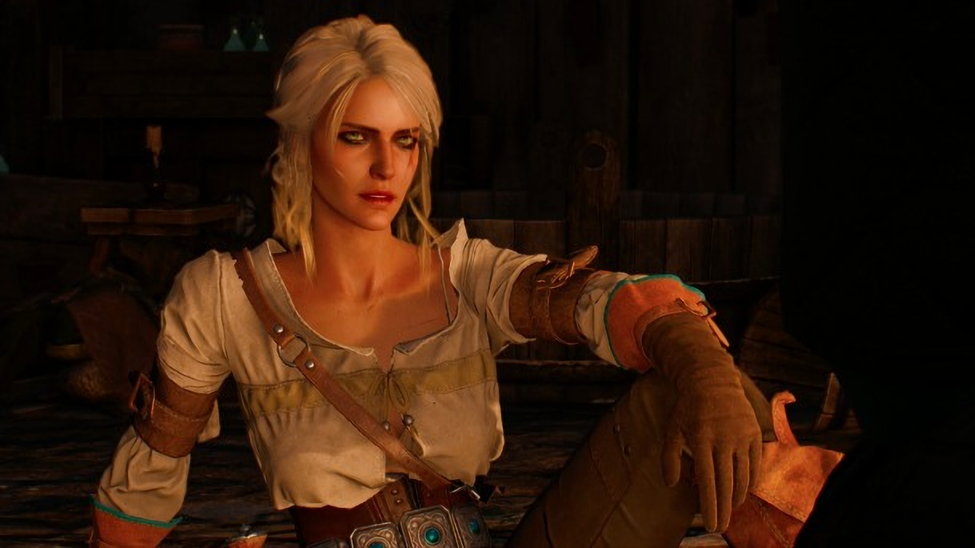 Ciri is really the main character of The Witcher III. If anything, Geralt is more of an important supporting character. However, The Witcher III doesn’t follow Ciri’s story; it follows Geralt as he chases after her, a step behind. The fact that you play as Geralt, instead of Ciri, is an important signifier of what CD Projekt Red sets out to do. While Ciri’s quest is of critical importance to not only her world, but every world, Geralt embarks on his journey because he wants to find his loved ones. The player experiences the world and events of The Witcher III from the point of view of, essentially, a concerned father (albeit, a father who kills monsters for a living). His perspective informs not only how we feel about Ciri and her quest, but how we feel about each of the events and people we meet on our way to her.

Geralt’s journey to find Ciri is quickly complicated by war. Velen, the area Geralt tracks Ciri through, is the no man’s land between the invading Nilfgaardian army and the defending Northern Kingdoms. We only see one real battle between Nilfgaard and the Northern Kingdoms, however, in cinematic cutscene preceding the beginning of the game. The game itself is much more interested in depicting the aftermath and consequences of war than war itself.

War’s myriad devastations are inescapable in The Witcher III, affecting everything and everyone in Geralt’s path. The inhabitants of the farms and villages of Velen live on through the horrors they found at their doors. They work around mounds of the dead while tending their fields, ration their meager food supplies, and house, entertain, or otherwise try to tolerate the soldiers occupying their homes. When Geralt encounters bandits on the road—the “random encounter” enemies you fight in the open world—they are deserters or desperate peasants, forced to survive by the only means left to them. The monsters you encounter were either displaced from their habitats or else attracted to the carnage as an easy meal. Evidence of a delicate balance disrupted is everywhere, and the cause and effect of the disruption is always clear. Every bandit camp contains some indication of who the bandits were, whether that’s wanted posters, journals, or personal effects. When you encounter a monster, their displaced nest is never far off. 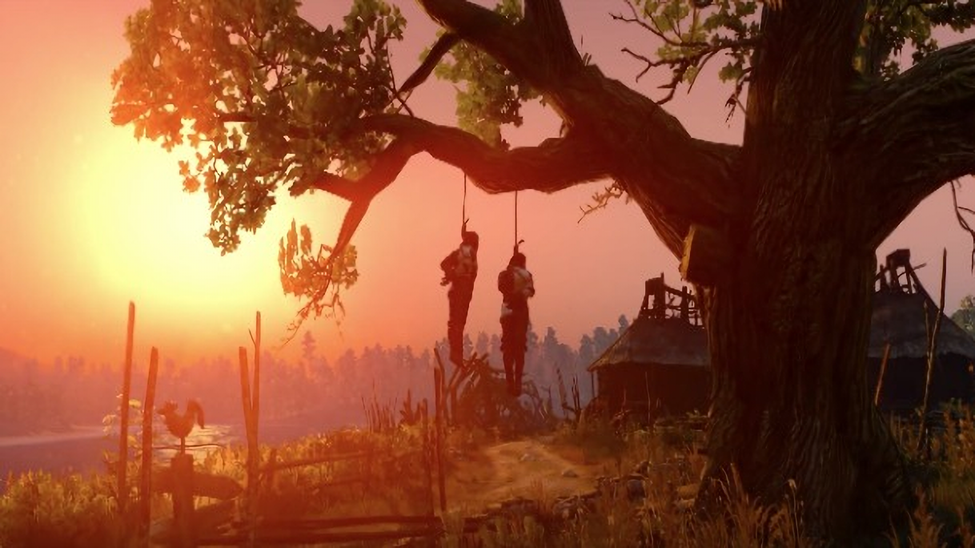 The chaos of war affects Geralt and the player as much as it affects anyone else living in Velen, in every sense—personally and professionally. A Witcher is a monster hunter-for-hire; their job is to wander “the path,” solving problems mundane and supernatural for compensation. A majority of the optional side quests you complete are professional contracts, undertaken only after negotiating pay.

Witchers are not particularly exotic or even special. Sure, they have superhuman strength and magical powers, but they’re also a relatively mundane part of the economy. Witchers are referred to as a “caste” throughout the game. Geralt is far from the only one; you meet three of his peers in the opening. While most villagers have probably never met a Witcher, they all know what one is. You take on contracts by visiting village notice boards and responding to advertisements seeking help killing a monster. These ads appear alongside people seeking roofers or cobblers, or offering to mend clothing for eggs or milk. You’re not a hero slaying monsters for glory; you’re providing a service, like any other worker. Ciri might be a chosen one, but Geralt struggles like all the other workers in Velen, hard pressed to make a living and survive a hostile world.

By far the most common contract you’ll undertake involves finding a missing loved one. Geralt isn’t the only one looking for the people he cares about in a warzone. Geralt may be a 200 year old mutant monster slayer, and his daughter may be The Lady of Time and Space, but—crucially—that’s not what’s important about them. More than monster hunter and chosen one, they’re a father and a daughter. How he goes about it may differ, but Geralt is doing the same thing as the people around him, for the same reasons. The Witcher III focuses on Geralt’s humanity, not his destiny or power. It’s interested in how he is similar to the ordinary, not how he’s different. What Geralt does may be the content of the game, but why he—and you—do it is the point of the game.

Everyone you meet in The Witcher III—a war profiteer and murderer, a scheming spymaster, an emperor securing his legacy, or even an otherworldly King who wants to conquer everything—is doing what they’re doing for someone they love. When you’re fighting off a monster or tracking down a missing child, it’s not (just) because you need 300 more experience to level up or because you’re going to get a sweet sword; it’s because you care about what you’re doing and the people you’re doing it for.  When you take on the role of Geralt, you aren’t just performing his job, you’re performing why he does his job. 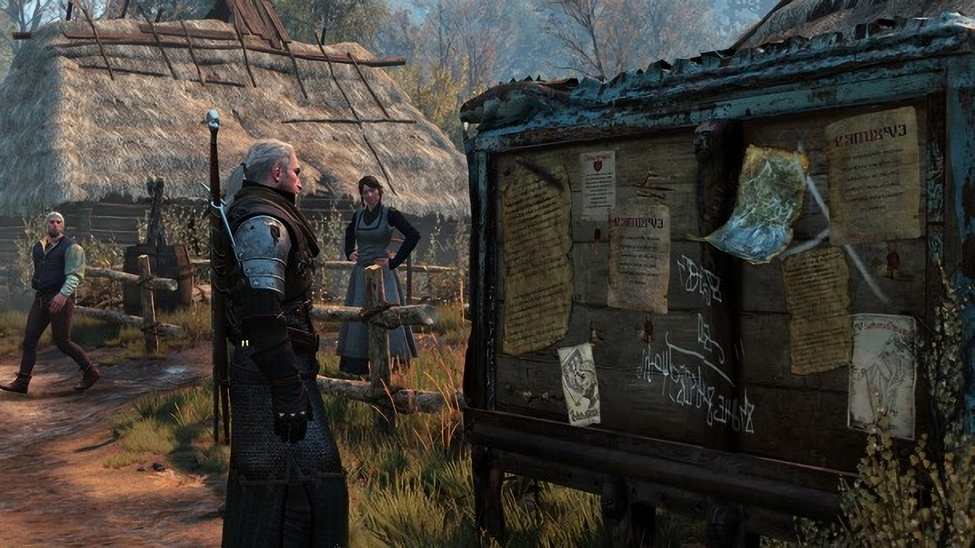 Like most RPGs, you’ll make decisions as Geralt that have major effects on the future of the world. However, regardless of what you choose, Geralt is still Geralt: he still empathizes with peasants and monsters, he still wants what’s best for Ciri, he still sets out on the path for the same reason Ciri saves the world. In The Witcher III, the player has the same fears, duties, loves, and motivations as the virtual people they interact with. As Geralt understands and empathizes with these people, you come to as well through Geralt.

The Witcher III makes you a part of its world, not only because you affect it, but because it affects you. By giving their player a way to experience what it feels like to be part of something bigger than them, CD Projekt Red has created a game that fosters empathy, in-game and out.

Harry Mackin is a freelance writer from Minneapolis, Minnesota. He has been published by Game Informer, Paste, Playboy, Thumbsticks, and Unwinnable. You can find him on twitter @shiitakeharry, and more of his writing is on harrymackin.com.