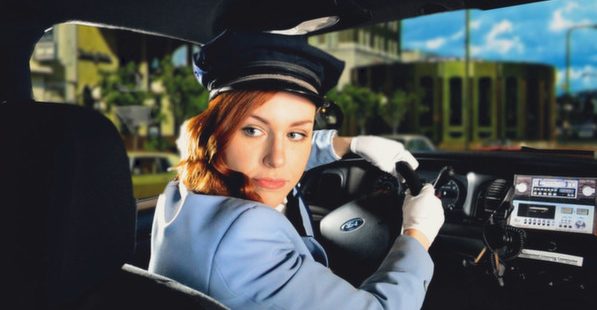 Miguel Penabella sits in the backseat of a limo.

During a 2013 talk from the first Queerness and Games Conference, USC Postdoctoral Scholar Bonnie Ruberg shared a crucial method to bridge queer theory and games: “thinking queerly about not-explicitly queer games.” We can identify queer themes in games through story, characterization, dialogue, and gameplay, examining how games can be potentially allegorical or can speak to queer experiences intentionally or not. Think, for instance, of how we can embed queerness into Driver: San Francisco’s car-shifting mechanics, which enable players to swap bodies across male and female drivers and experience a sense of endlessly mutable identities. Another example is Assassin’s Creed III: Liberation, in which the central protagonist can disguise herself with various outfits to actively “pass” for a different race, class, or gender altogether.

And then there’s developer No Goblin’s 2014 game Roundabout, a seemingly silly affair that nonetheless conveys queer themes that have gone unfairly unexamined by games critics. Players maneuver protagonist Georgio Manos’s continuously revolving limousine through a crowded city littered with traffic, barriers, trees, and other obstacles while chauffeuring passengers to their destinations. Like the revolving player avatar of puzzle game and spiritual predecessor Kuru Kuru Kururin, Roundabout highlights the awkwardness of movement through treacherous spaces. The disconnect between Georgio’s unorthodox movement and her surrounding physical environments is where queer themes are most inventively expressed. In Roundabout, Georgio Manos doesn’t conform to the normalized behavior of driving “straight,” (indeed, “straightness” is referenced throughout the game), and she thus serves as an outsider among the cautious residents of the eponymous city. The narrator characterizes Georgio as distinct from the norm, noting, “there’s only one way this chauffer drives… Georgio never stopped revolving. As a kid, Georgio learned to move with the spin instead of fighting it.” Her outsider role means that her movement is constantly judged by outside forces, and ultimately Roundabout is a game about the awkwardness of queer subjectivity in public spaces, but also about the necessity for self-acceptance.

Roundabout can be considered a commercial release inspired by or in dialogue with what I have heard called the “new queer avant-garde” scene of videogames, which encompasses a prolific amount of self-released works about queerness from developers like Merritt Kopas, Porpentine, Mattie Brice, Robert Yang, Anna Anthropy, and many others. Polygon ran a great written piece and accompanying video back in 2013 that acknowledged this flourishing scene and the artistry being accomplished within these gaming circles. Roundabout comparably boasts similar themes to many of the games produced within the new queer avant-garde, particularly relating to analyses of what it means to be an outcast and what it means to move through hostile spaces while refusing to conform. This Slant article by Ryan Aston gestures towards such themes, praising Roundabout’s central lesbian relationship and notes how a “character’s request for Georgio to ‘try going straight’ not only questions her driving ability, but also points to her sexuality and social status as an outcast.” Chris Priestman for Kill Screen more thoroughly identifies Roundabout as an “allegorical narrative for the struggles of not belonging—pointedly, of being queer,” though these articles remain the lone analyses I can find of Roundabout as a game about queerness.

The very opening seconds of the game immediately communicate tensions between queerness and established boundaries by a dominant norm. Georgio Manos begins driving while being watched, judged, and evaluated by a DMV driving instructor who measures how well she can integrate within prescribed rules and boundaries established by the city. The narrator explains that Georgio’s revolving method of driving is deemed unconventional to some, but the protagonist owns her identity and is unapologetic about it despite the instructor’s warnings to “just keep things straight.” 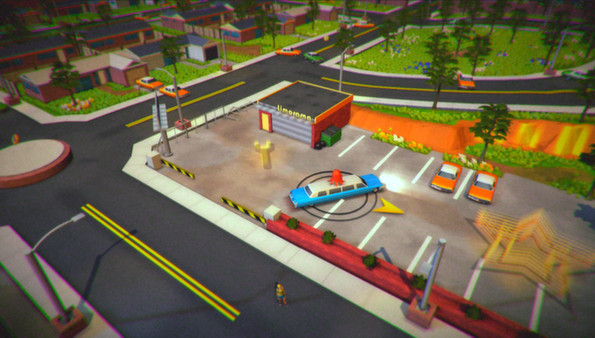 Throughout the game, Georgio Manos will transport numerous passengers and win the acceptance of allies including Mickey the Mechanic and eventual lover Beth, played by a bubbly Jillian Carol. These story beats are presented through the antiquated form of full-motion video (FMV) cutscenes of real human actors mimicking the performances of cheesy 1970s B-movies (stock footage and clips from the 1970s is also intercut), lending Roundabout both a parodic and progressive quality. By employing FMV cutscenes, Roundabout lampoons the archaic-ness of videogame storytelling and dialogue, yet it also reclaims the format as a space for a women-centric narrative and LGBTQ themes. Roundabout is certainly a game with a big heart, and the campy and colorful throwback disco style allows for ridiculous characters with intentionally hammy performances like Disco Sylvain or the snooty French-Canadian villain Ronaldo. A wonderful Kate Welch plays Georgio Manos, giving a completely wordless performance of over-the-shoulder glances and reaction shots including eye rolls, blank stares, and opened-mouth shock.

Georgio’s blossoming romance with frequent passenger Beth makes explicit the queer themes of the game, and Beth’s attitudes contrast the animosity of the city by actually conveying enthusiasm about the idea of a revolving limousine. Beth convinces Georgio to escape the suburbs and move to the bustling downtown of Roundabout City, where Georgio’s spinning driving will be better received. Surely enough, billboards appear that advertise her limousine company and more revolving vehicles populate the traffic on the road. However, a mid-act twist reverses the good fortune of Georgio Manos as the city shuns her limousine driving after an unfortunate accident, and she’s exiled to a snowy countryside hideaway while her closest allies Mickey and Beth leave her after increased disillusionment with her police run-ins. Her driving is eventually policed by pursuing law enforcement, cementing ideas of systematic bodily control by institutions and further narrowing Georgio’s space of movement in public spaces.

The means to overcome such oppressions is through the gradual acceptance of Georgio’s allegorical queerness. After some time away, Mickey the Mechanic returns and accepts Georgio for who she is, pleading, “You should drive the way you want to drive,” and encouraging her to revisit the city. Beth’s turnaround comes with greater conflict, but No Goblin never forgets their love story at the heart of Roundabout. In a bravura display of its central allegory, the reunited but still uncertain Beth admits that she can’t deal with Georgio’s twisting and turning and implores her to “just be straight with me,” convincing her to cease spinning and attempt driving straight. This late-act sequence feels appropriately awkward after having been revolving for the entire game, and it’s much harder to traverse the familiar landscape while passing as a “straight” car. Rather than fluidly flowing around a roundabout or dancing between parked vehicles, Georgio now has to inch around it and slalom through obstacles with sluggish discomfort. The narrator admits that for Georgio, “driving straight felt… wrong,” and Beth eventually drops her unnatural request, conceding that Georgio should just be herself and revolve.

Self-acceptance is the key theme in Roundabout, and there is a rich history of queer-themed games about how simply moving through spaces is a political act rife with implications and meaning. One of the closest analogues to Roundabout in the new queer avant-garde is LIM, the 2012 game by Merritt Kopas in which players navigate a flashing multi-colored square through a hostile environment of brown and navy blue blocks that seek to shun the player outside the maze-like space. Just like in Roundabout, players awkwardly maneuver and fit through tight slots while considering how movement can be coded in certain ways that are deemed “normal.” Your block will inevitably collide with hostile blocks that are both repelled by the player’s presence but are also violent towards it, and players can press a button to blend in and “pass” as whatever color conforms to that space. Players can be pursued, trapped, or even shunned as an outsider, suggesting a reading of LIM as a game about the public monitoring of queer bodies, transgender experiences, and any number of other marginalized identities locked in systems of oppression. Comparably, movement in Roundabout is mired in violence, and Georgio’s revolving limousine erupts in a destructive fireball upon too much contact with the obstacles and belligerent police cars of the city. Moreover, fleeing pedestrians are frequently mowed down and leave a trail of blood as you traverse through the spaces of the game, lending Roundabout a darkly comic slapstick tone and rendering any movement potentially violent and transgressive. 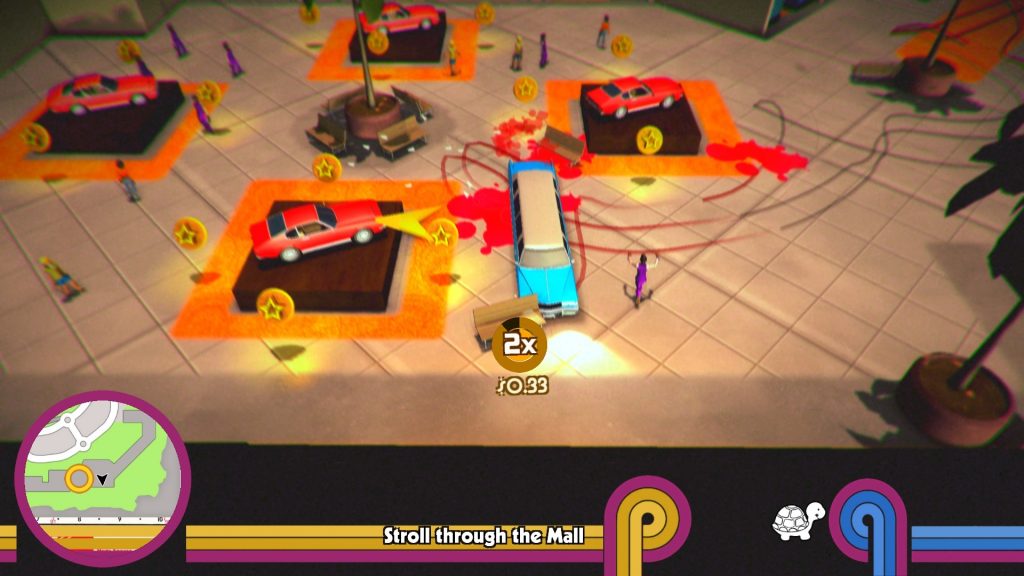 The aforementioned Bonnie Ruberg also identifies the titular character of Octodad: Dadliest Catch as an allegory for “queer passing,” which makes sense for a game about blending in within a heterosexual marriage and controlling one’s awkward movement under the watchful surveillance of public spaces. Indeed, what Roundabout, LIM, and Octodad ultimately share is an emphasis on movement as a crucial queer theme, allegorizing the experience of transgender, homosexual, and other queer individuals “passing” in a society that is intolerant, judgmental, and prone to violence against anyone who deviates from the norm.

Roundabout is one of the biggest surprises in recent memory, disguising its central allegory underneath colorful humor and kitschy FMV storytelling. If we are to think queerly about games and bridge the medium to broader ideologies and criticism, then any single element of a videogame should be open to deeper analysis. The subtext is there to be found, and meaning to be parsed from the images and words provided, whether it be the difference between a limousine revolving or driving straight or how various reaction shots communicate a variety of emotions. Beyond the superficial pleasures of gracefully whirling around crowded city streets in a stretch limousine, Roundabout also culminates with one of the more refreshing final images of queer storytelling in videogames: the potential for liberation, and the promise of a boundless open road ahead.