The Pain of Lara Croft

One of my earliest gaming memories is playing the original Tomb Raider with a joystick of all possible input devices. I recall getting fairly far into the game, until my approach simply stopped working. There was a ledge about an inch away from me that I could never reach, no matter how high I jumped or what objects I pushed beneath it. I never figured out how to reach it, so I soon gave up. Aside from a brief stint with the third game – my only memory of that being that I shot a tiger in the face – Tomb Raider never excited me since then.

So I was surprised that Crystal Dynamic’s reboot captured my interest and held it up until release, and that when I finally played the game, I found a confident, engaging and frequently exhilarating action title. More work had gone into rounding out Lara’s character than her body this time – thanks to the always excellent Rhianna Pratchett – and the action was tense and dynamic, taking elements from Naughty Dog’s exemplary Uncharted series, but twisting and tweaking mechanics to form a (comparatively) grounded experience.

The action game within Tomb Raider is where it really shines, while still telling a nice, if not revolutionary character based story. But there are stranger aspects to Tomb Raider, a few elements and creative choices that don’t quite run together. It’s not a constant feeling, spoiling the game like a sullen rain cloud. It’s individual moments, set pieces and even fractions of seconds that pull away from the enjoyable action experience and completely change the tone for the worse. 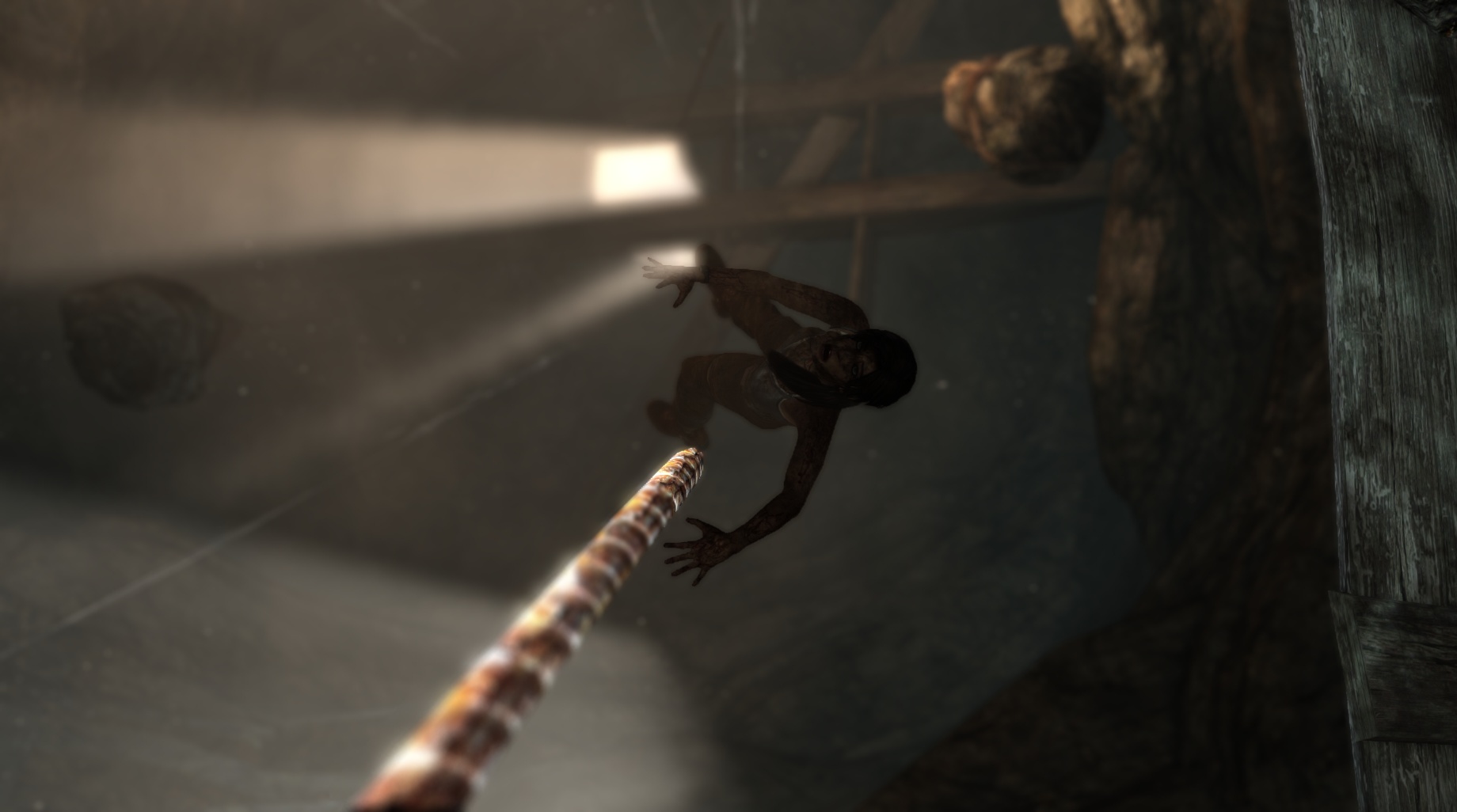 Possibly one of the most infamous examples is a death scene during a dramatic and exciting slide through river rapids that has Lara impaled on a pointed barb. It’s evidently not a nice way to go: The barb goes through the bottom of her chin and out the back of her head, Lara visibly struggles and twitches, pulling at the branch before finally dying. It’s a gruesome and rough moment, more suited to Resident Evil 4 than the adventurous tone of Tomb Raider.

The game is executed confidently, but it feels like some people at Crystal Dynamics had a different focus than others. The game visually references British horror film The Descent, an intense and violent flick about a group of women who venture into a cave system and come face to face with unnatural, horrifying creatures. A great deal of the more violent imagery in Tomb Raider seems to be culled from inherently dramatic, but vicious, bloody horror. Lara’s death animations certainly have that vibe to them, when they stray from the merely painful into the uncomfortable. They’re not leering, nor do they revel in sadism, and I doubt they were put into the game with any ill intention, but in the context of everything else and the ideas and messages of the rest of the game, they seem very out of place.

It’s even stranger considering pain is actually handled very well by the game. Crystal Dynamics isn’t afraid to hurt Lara. Within the opening five minutes she’s impaled through the stomach and forced to remove the offending barb by hand. Powerful, painful scenes like this demonstrate a greater cohesion between the survival-action gameplay and the more visceral, horror elements. The gore and the blood here demonstrate a fortitude in Lara, a desire to survive that shows her as a capable heroine and not a fragile flower.

It’s a very strange thing to say, but Crystal Dynamics are far more capable at hurting their leading lady than they are at killing her. Before release, there was a great deal of talk about wanting players to feel for her, to create a desire to protect her. Thankfully, that vision doesn’t really come across in the final product. Lara is able and willing to be hurt and scarred, to do horrible things in order to save her friends. We as players are not some guardian to hover over her and console her when she’s wounded. The only time such parental feelings dawn are during the grisly death animations, where her head is crushed by a boulder or a treebranch goes straight through her torso. And they’re not about protecting so much as wanting the scene to end. 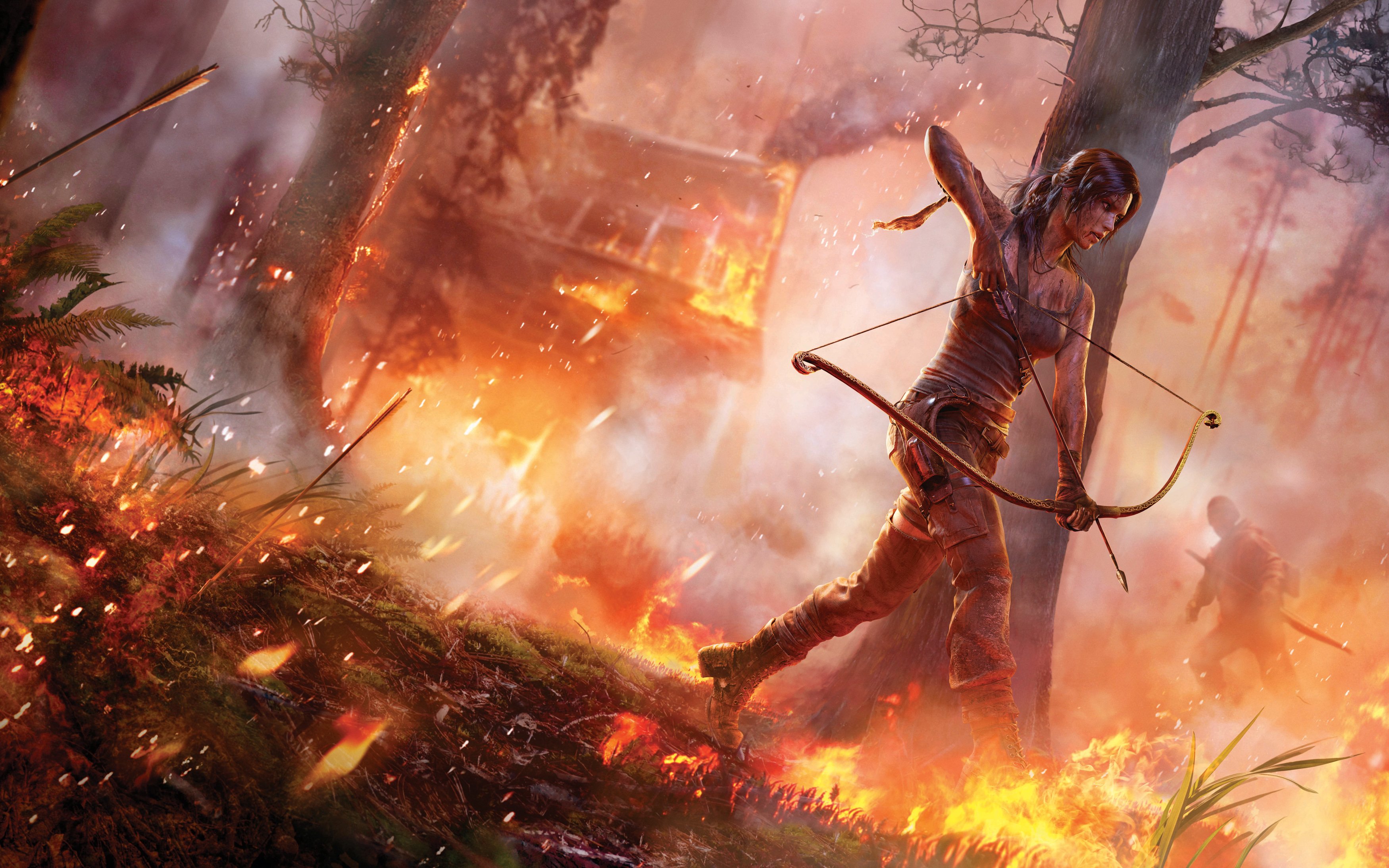 Deprived of context, the violence against Lara itself would not necessarily be a problem. The superb Resident Evil 4 contains just as much horrifying avatar murder, and The Last of Us was never afraid to show us nasty things happening to both Joel and Ellie. It’s the inconsistency that doesn’t work in Tomb Raider. The vast majority of the game is about action with hints of a brutal survival theme – violent, but never unpleasant. Then it slips in these unnecessarily hard scenes, to no benefit for the game.

I’m not sure what Crystal Dynamics hoped to achieve with these horror elements, as they come and go in the blink of an eye. At one point, Lara wakes up in a room filled with sliced and diced corpses, dripping with blood, gore and grue. As soon as she steps outside the room, the building begins to tear apart from a wind storm in another high-tension, adrenaline-pumping action beat. The two don’t gel, and the horror elements only serve to disorient and undermine the excellent action.

I can see the desire in Tomb Raider to go all out, to distance itself from the sillier entries of its genre and create a game that’s darker, meaner and more hostile. But the real reinvention the game brings us isn’t in being a harsher, more realistic look at the world of videogames’ best known archaeologist. It’s a look at Lara as we’ve never seen her, human and fragile, but determined. She’s not a ballet dancer with pistols, she’s a young girl who is coping with a terrible situation. She doesn’t always cope well, but she takes the pain and she uses it, fighting harder. When she tumbles from a roof and lands with a crunch, only to pull herself up again and limp on, it’s far more evocative and far more meaningful than any of the times she’s impaled or crushed. The new Tomb Raider isn’t a great reboot because of how it kills the girl at the centre of the story, but because of how it hurts her, only for her to stand up again and push on.