The Last of Us Has a Problem with Minority Trauma

Shae De Pass on how HBO can still make it right.

The Last of Us is an innovative game not easily compared to others in the zombie-survival genre. Its approach to the horrors of grief and human nature is what make the game so memorable, even close to eight years after its release. Like many fans, I was thrilled when I learned HBO would be adapting it into a television series. But as much as the game does right by the survival-horror genre, it does wrong by people of color and queer communities. This is a reality made apparent through the treatment of its characters, seemingly in the name of driving a narrative, and that alone makes me nervous to watch the story play out on TV. Is it possible for minority suffering to be portrayed without being gratuitous? And how will this be handled in the upcoming series?

As a Black gamer, it’s not easy to overlook Naughty Dog’s fascination with Black death within the franchise. There’s a tendency to place racial minorities in crucial roles only for them to die unexpectedly and brutally in a secondary plotline. Take for example the heartbreaking Sam and Henry subplot; two brothers on a journey similar to Ellie and Joel’s. As players we watch as the four survivors bond over both pre- and post-apocalyptic life; we even see Joel smile for what feels like the first time in the entire playthrough. But when Sam becomes infected, their journey is cut short. Henry is forced to shoot and kill his infected little brother and, unable to handle the prospect of a life without his only family, decides to turn the gun on himself. This cutscene is a heavy watch and although I have replayed the game multiple times, I’m not sure it’s something I want to see outside of the game.

Marlene’s story is one of the most important, as she is the foundation of our favorite father-daughter duo’s relationship; the guiding force for the entire cross-country journey we experience as players. Her only goal is to give humanity hope that the world can be as it once was, but Joel ruthlessly destroys that hope. He cruelly murders Marlene, the closest thing to a mother-figure Ellie has ever had, so she can never find her. We watch as she begs for her life, wounded and immobile, only for her pleas to be ignored. This was yet another scene that was hard to stomach, as Marlene was a character with admirable strength and will. Throughout the hours I played as Joel, this was the one moment where I felt completely disconnected from his character.  I often wonder if that scene would have been less disturbing if the developers had left Marlene’s fate a mystery as they did with Joel’s lie, instead of showing us her death. By the end of the game, we would understand that her journey clashed with Joel’s, and we would be able to interpret the ambiguity of the scene as her death without having to witness it. 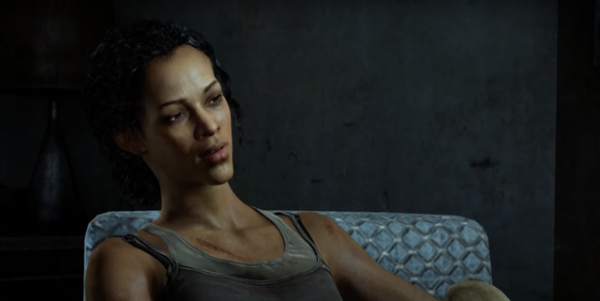 It’s not that these characters die which is necessarily irksome, but rather how their deaths are portrayed. Any time a marginalized character appears on the screen, marginalized audiences hope for someone worth identifying with. But too often, those hopes are cut short. Sam, Henry, and Marlene are unequally burdened with being saviors while facing absurd deaths, and when compared to the non-black protagonists, their complexities and stories are left under-explored. Sam and Henry’s own attempt at survival is pushed to the side when they are tasked with aiding Joel and Ellie in escaping a city filled with violent city dwellers. And although Marlene isn’t a hero in Joel’s eyes, she is arguably on a hero’s journey of her own. Each of these characters deserved more development, but perhaps it was intentionally overlooked to focus on Joel’s story and his character development.

If the HBO series is anywhere near as emotive as the game, it may be difficult for viewers of color to see, considering how heavily the past year has been filled with death and trauma in Black communities all over the world, a trauma that is constantly being reported publicly. The Last of Us HBO series couldn’t have come at a better time – during a global fight against a deadly pandemic that has claimed millions of lives. For Black communities across the world, the past year has not only been a fight for survival from a fatal virus, but also a fight against state oppression and brutality. People have heard stories about or seen traumatic pictures and videos of Black bodies reported nearly daily through the news and social media. While protesting and organizing isn’t a new concept, the increase in activism against police brutality has gained international traction. And as the fight continues, developers of the HBO series can use the opportunity to retire minority death tropes, where the most painful and meaningless ways to die are reserved for marginalized characters.

The second installment of the game isn’t much better than the first with this issue, as the majority of the central characters that meet an untimely end are of visible East Asian descent. During a playthrough, players can expect to see Ellie kill a random girl playing PS Vita and see Abby shoot Jessie – a vital character – in the face. One of the more vexing subplots in The Last of Us Part II is that of Lev, a teenage trans boy with a tragic backstory. In the sections that include Lev, we see him lose significant members in his life within hours of each other, one of them being his mother who disowned him for his identity and attacked him, thus forcing him to kill her in self-defense, the other being his older sister, Yara, who dies at the hands of a militant group while trying to save her brother. He’s also exiled from his entire community for being transgender and constantly referred to by his dead name, all while attempting to survive a zombie apocalypse. It feels as though Naughty Dog included a trans character just so his unending suffering can create pathways to lengthen an already lengthy story. I’m unsure of any plans for the HBO series to continue into Ellie’s adulthood, but if that is the creators’ intention, I would hope connecting with trans creatives would be a part of the production process. When writing complex characters from marginalized backgrounds, it’s worthwhile to engage with said underrepresented communities to understand how they want to be seen, giving the developed characters an authentic storyline and minority groups – in this case, transgender persons – a relatable experience.

In addition to watching these characters suffer, we’re also forced into actively participating, and it feels personal in an unintended way. As Joel, players fight their way through Firefly militants to Save Ellie, setting in motion the events that will lead to Marlene’s death. In the second installment, we’re then forced to make Ellie beat Nora – one of the game’s few Black characters – to death with a metal pipe. If players wish to move forward, they must involuntarily commit these atrocious acts. It wasn’t the general acts of violence that made me feel disconnected from Ellie and Joel in those moments, but their tendency to direct the majority of their aggression on racialized persons. Unfortunately, Naughty Dog failed to consider how those scenes could be interpreted through a racial lens.

The point of including marginalized characters as pawns is not one exclusive to Naughty Dog. But what makes it particularly frustrating for the Last of Us is the attempt to be different in the name of queer and racial inclusivity, which ultimately fails with the harsh treatment of its secondary characters A story this impassioned doesn’t need to take every emotional avenue, especially ones that evoke such distressing emotion.

Players and viewers are capable of understanding plot lines and thematic underpinnings without death being made visible at every corner. This makes for a traumatizing experience rather than an enjoyable, emotive one. Things don’t necessarily have to be said – or in this case seen – to be understood. Implication is a powerful tool that, if properly used, can yield the same results without upsetting audiences. As it stands, the portrayal of minority characters has come off as insensitive and politically tone-deaf. Hopefully, the creators involved in the production of the HBO series will be mindful of our current reality by taking note of how aspects of Ellie and Joel’s story can be a trigger to watchers and use a different approach to tell these stories, one that greatly includes queer and BIPOC perspectives, giving co-writer and creator Neil Druckmann as well as executive producer Evan Wells a chance to do what should have been done in the game franchise.

Shae De Pass (@shaee_dee) is a post-graduate research student and writer from Toronto, Canada. She is passionate about the intersection of race & culture and has been featured in the BlackGirlNerds online publication.

Tags: The Last of Us, The Last Of Us Part 2
← Due Diligence: Assassin’s Creed Valhalla’s main character is a woman. So why’d Ubisoft put a dude on the cover?
Opened World: Dancing On My Own →