There’s a lot you can criticize about Far Cry 3. Its excessive use of minigames and carnival distractions for instance, or the basic narrative of a white man colonizing the jungle, especially considering the bizarre mixture of ethnicities and accents it sells as ‘exotic’. But according to lead writer Jeffrey Yohalem, these elements are to be seen as intentional parody: Far Cry 3 is satire, its nonreflective violence and problematic portrayal of minorities merely comment on industry tendencies.

It’s rather telling that Yohalem had to explicitly state this intention after the fact. Players don’t seem to have interpreted Far Cry 3 as satirical, and how could they? The game might copy many of the absurdities of our favorite medium, but it doesn’t exaggerate them, doesn’t overdo them, doesn’t ridicule them. It’s not satire by videogame standards: Where flat characters and excessive violence are generally presented in earnest, satirical takes like Saints Row need to go one step further, beyond good and evil. Adapting to videogames’ skewed idea of normality is not the same as criticizing it, parody is about more than mere imitation and the supposed subtext of Far Cry 3 blurs the lines between subtle and nonexistent.

But while Far Cry 3 fails to comment on violence in videogame culture, it does offer an interesting perspective on its general fascination and its perception in today’s zeitgeist. Kill Screen aptly described it as “the first game about millenials”, the spoiled generation of Jason Brody and his obnoxiously rich ilk, whose existence is defined by beach resorts, tanning beds and smartphones on the one hand, and unemployment, weltschmerz and various financial and personal crises on the other hand.

In a sense, Jason Brody’s conquest of the jungle, his transformation to a superhuman predator, is merely the brutal, yet logical conclusion of his initial vacation plans. His booze-cruise was always about testing limits, about feeling alive again through various near-death experiences, in both a metaphorical and a physical sense. The vapid hedonist sampled every socially accepted option: alcohol, loud music, meaningless sex, drugs of all shapes and sizes, extreme sports, etc. Crash-landing on Rook Island simply gives him the opportunity to keep pushing boundaries as he moves from imitations of death to the real thing. 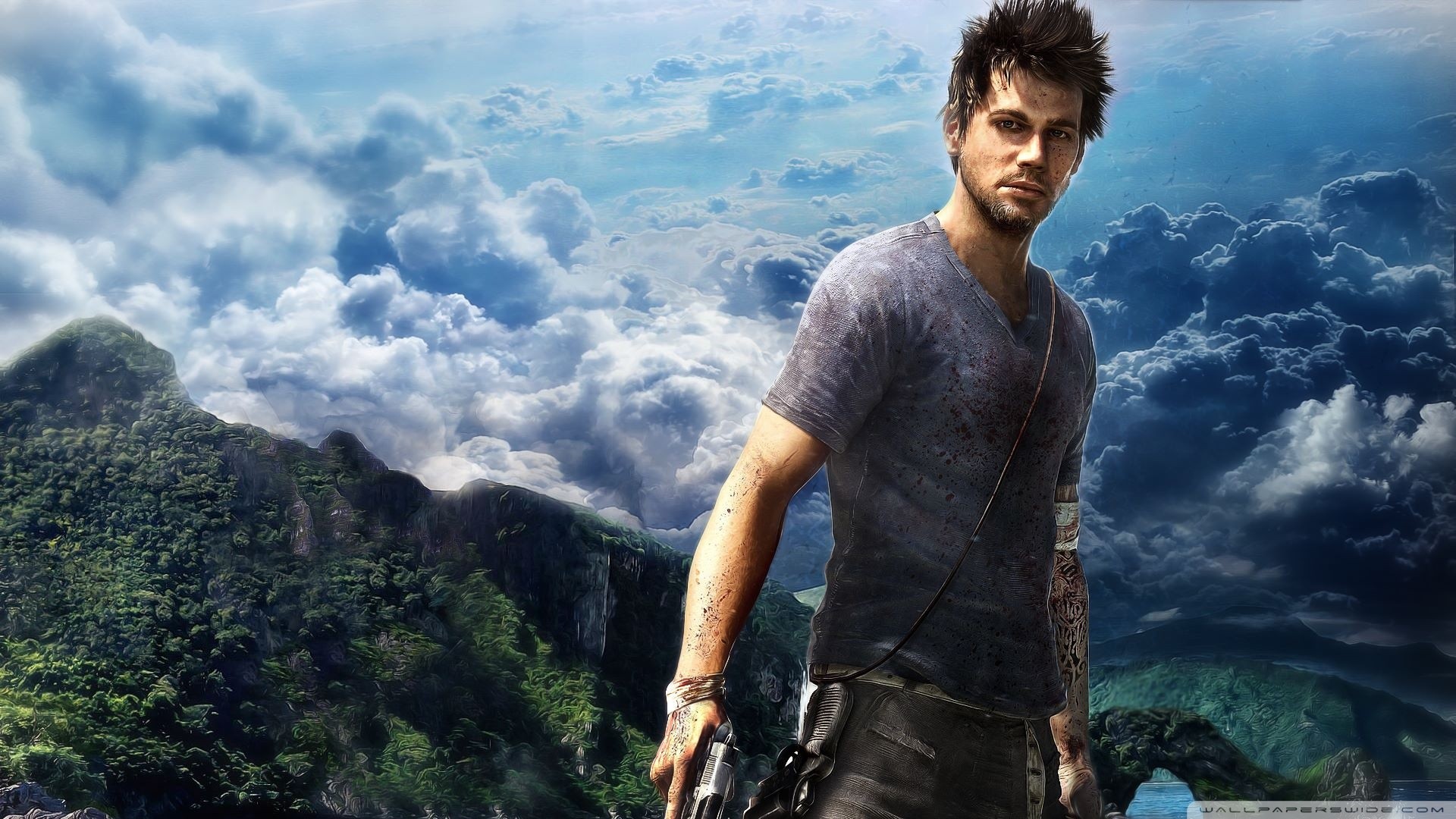 Why? Because this increasingly digital, artificial, fake world can leave you desperate to just feel something, anything at all. So long as it’s something genuine, pure, real. Because violence scratches that itch, because it yanks you from the uncomfortably comfortable mundanity of modern life and presents you with arguably the most primordial human experience of all: you or me. Kill or be killed.

Violence is power, power over another life and its untimely end. It’s a tempting proposition considering the sheer number of things that have seemingly slipped beyond our control. Employment and financial security depend on a run-down economic system that even our capitalist overlords don’t seem to fully understand. Love, by common understanding, is based around random encounters and luck of the draw.

Violence is wrong, yes, but it’s also intimate. For somebody like Jason, it might well be the most significant human interaction of their entire life. It fills the void, meaningless existence of the confused manbaby. The kidnapping, his escape, the trapped friends he needs to save – these things are all just catalysts for the change in him, the initial push that leads him to realize that he’s not only able to kill when forced to, he’s actually pretty damn good at it. And he loves it.

While Far Cry 2 tried to portray the horrors of war by intentionally not being fun, Far Cry 3 marks the series’ triumphant return to the glories of modern escapism. Its arsenal of flavored lubes and buzzing toys shows the absurd level of mastery we have reached when it comes to providing such masturbatory thrills, just how good we have gotten at orchestrating problematic power fantasies.

Far Cry 3 is fun. More importantly, Far Cry 3 gets progressively more enjoyable as you master its violent mechanics. While Jason slowly adapts to his surroundings and his newfound role, becomes the aggressor, we as players are busy discovering the many interesting ways of dealing with the local pirates. As is frequently the case in such sandbox titles, the most brutal options just happen to be the most entertaining, too. 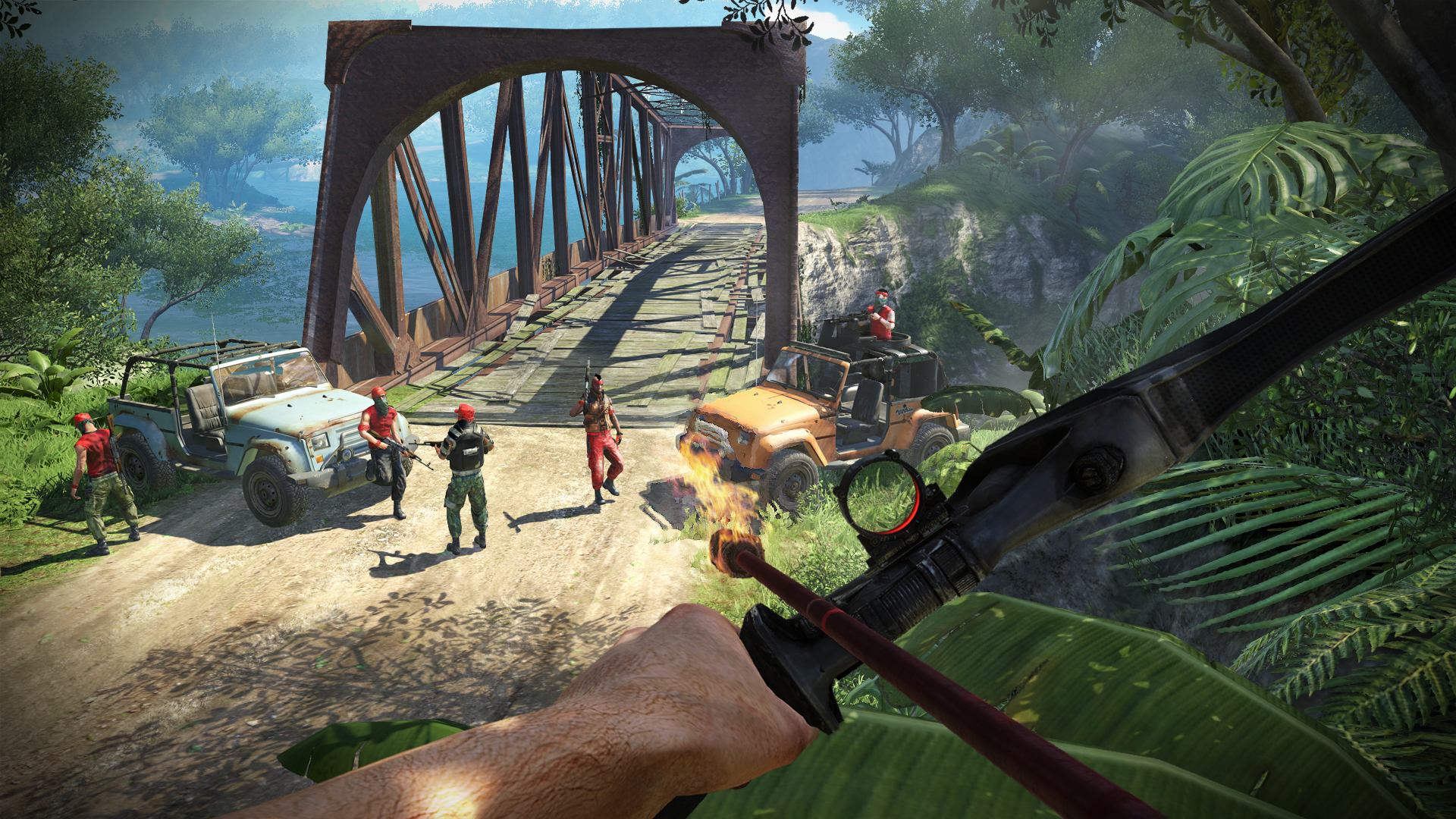 Having shed my spoilt, cowardly ways, I now stalk my foes with bow and arrow, set fire to their outposts and burn them crisp, drive my machete through their chests, feed them to tigers, Komodo dragons, sharks and any other form of endangered, dangerous species. Just how quickly and easily good-for-nothing Jason discovers his knack for killing betrays the game-like nature of his exploits, but also serves to show the dark side hidden even in empty-headed, fun-loving cosmopolitans.

In this sense, Jason serves as an icon more so than as a fully-fleshed character. Consistency and depth are sacrificed to cast him as the incarnation of the young, carefree generation that might spend its endless hours of free time getting drunk in foreign countries or, yes, playing videogames. Far Cry 3 might not be about videogames specifically, but its protagonist definitely falls into their target audience. It’s easy to envision Jason playing Far Cry 3, actually. Only now he gets to live out those power fantasies and all they entail, a premise that brings the game close to offering observant commentary on society’s fascination with violence, if it wasn’t so damn set on explaining away his inconvenient bloodlust.

Jason Brody kills to save his friends, that’s the idea. Though if you’re anything like me, you’ll have forgotten their bland, empty faces the second your captivating captor Vaaz Montenegro first appears on screen roughly five minutes into the game. The superficial relationships of this gang of cardboard cutouts never even come close to being as interesting as Far Cry 3’s enigmatic villain, or the chaos of its jungle. Every second you spend in the relative safety of their cave hideout, you’ll find yourself itching to head back out for more firefights, more explosions, more tigers.

There’s this scene halfway through Far Cry 3: Jason has just returned triumphantly to the cave hideout, when his newly rescued friend reveals that Jason’s brother Riley was killed. He pauses, and for the second time the game expects you to react to the death of a brother it never really introduced to you. Meanwhile, I’m having trouble matching the name to one of the faces from the intro. Which of these kids was Riley again?

After receiving the tragic news, Jason ends up talking to another one of his pothead friends and asks him, presumably to dull the pain, if he can have a puff, too. He declines: Jason needs to keep a clear head to get them off this island. Even if I’m not generally inclined to read Far Cry 3 as satire, that has to be a joke. A clear head? Me? Buddy, I’m on the trip of the century over here. Keep your joint then, I’m high as a kite on blood and adrenaline.

Jason’s transition to new, harder drugs is shown best through his assault on the pirates’ cannabis fields, a scene that will stick in mind not just for its driving dubstep tunes, but its strong thematic beats. Before the crash, discovering the fields of green would presumably have rendered Jason ecstatic, he would have spent the next few days baked at the beach, blowing his own brains out. Now Brody is cheering and giggling as he puts the splendor to the torch, soaking in the destruction and not the fumes. He’s found something far more intoxicating than weed, his new drug is just arriving in the shape of enraged pirate guards. 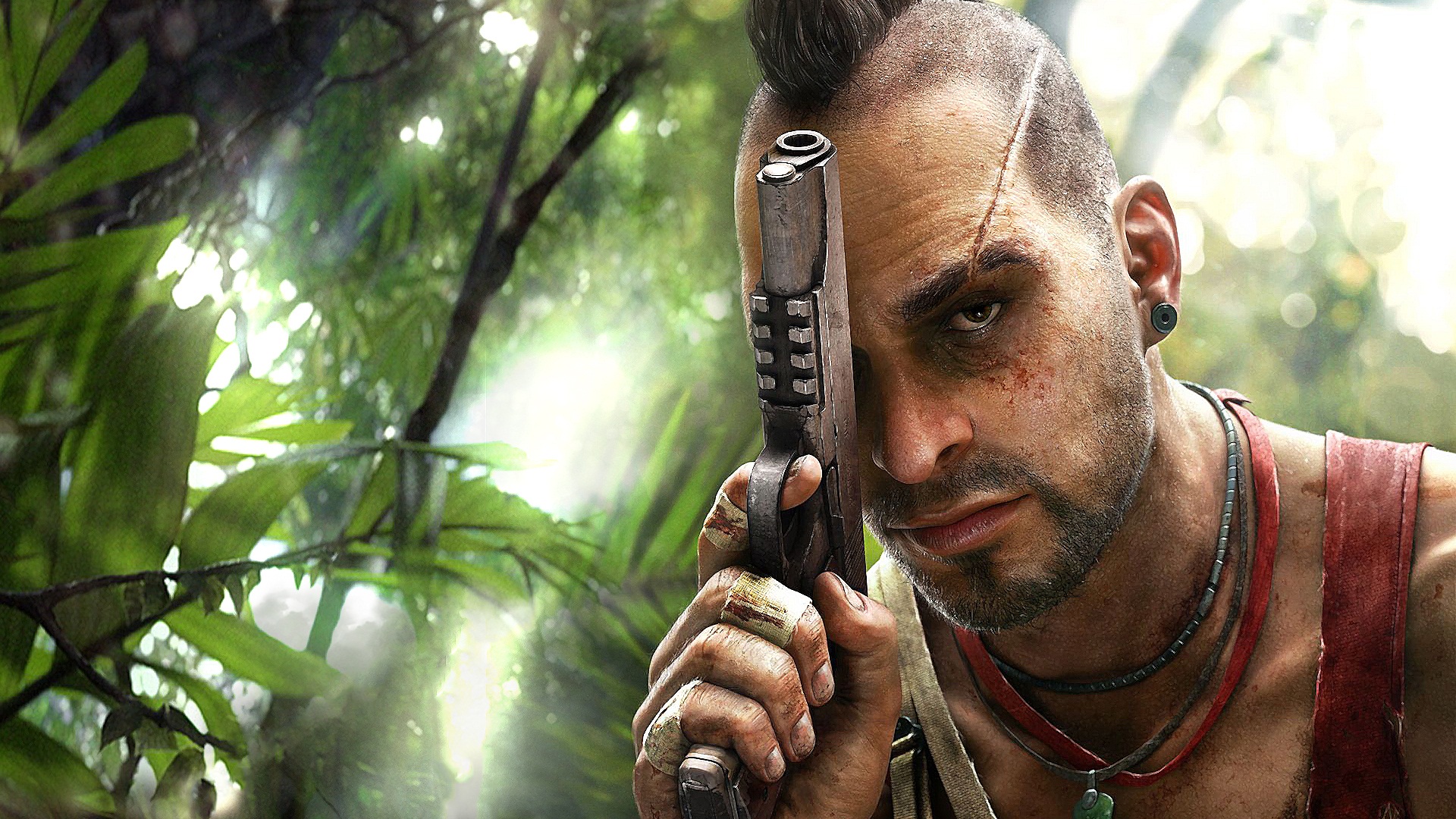 Considering the gleefully violent excess of this scene, it’s hard to argue Jason is merely doing what needs to be done to keep his friends safe. Fortunately Far Cry 3 has another explanation for his strange behavior ready: After claiming that he was forced to kill by circumstance, it now begins to argue that he is literally forced to kill, by his own deluded psyche.

Jason Brody kills because he cannot stop killing. The second half of Far Cry 3 seems to be based on this thesis: Jason vows bloody vengeance on backup bad guy Hoyt Volker, joins the Rakyat’s war with righteous fury and ultimately, depending on the player’s choice, turns against those closest to him. But painting his fascination with violence as a compulsive obsession is too simple, it ignores how shockingly normal Jason still is and, more importantly, contradicts our experience as partners in crime.

We, as players, can stop killing, we just don’t want to. Because we’re all crazy? Hardly. We’re no more interested in comprehensive carnage than Jason Brody is. We both just want to blow off steam, and while we need to make do with fiction, he goes one step further. Like William Foster in Falling Down, he simply starts doing all the things decent people rightly stop themselves from doing – not because he’s not aware of the consequences, but because he doesn’t care. What’s so truly monstrous about Jason is that, despite all the colorful pills and shots, he’s still perfectly lucid. He’s not crazy, he’s fully aware of his own actions. He doesn’t have to kill, but he can. Whenever he wants.

Far Cry 3 isn’t even willing to see its own idea of an obsessive mass murderer through to the bitter end. Instead, the game keeps pushing you into ever more defensive roles the more brutal it gets. You defend your plane, hold positions, guard your comrade. Even the final helicopter ride, several minutes of exorbitant death and destruction, is technically, by game logic, self-defense. If you don’t partake in the turret section, you are quickly shot down. To see that as the justification for excessive retaliation is nonsense, but it seems the game wants to provide some rationale for your actions even now, with Jason this far gone.

Ultimately, Far Cry 3 is both indecisive and inconsistent when it comes to its own protagonist, and this makes it hard to say what message, if any, can be gleaned from the game. Far Cry 3 is absurd. It might even be aware of its own absurdity, but despite self-adulation as a systemic critique of videogames, it’s more interested in maintaining the illusion of its all-inclusive adventure trip than it is in breaking it. For the purpose of your own relaxation, you are asked to ignore the walls and borders of this island resort. Barring some grand effort on their own part, players will stay naive tourists, just like Jason Brody.

Despite Jeffrey Yohalem’s claims, I can’t see Far Cry 3 as metacommentary. The game might be excessively violent, but the idea that the mere existence of violence in videogames inevitably leads to its contemplation, would have the medium consuming itself in an endless, fundamental debate since its very inception. But if you ignore this speculative level, all that remains of Far Cry 3 is a slightly self-deprecating power fantasy, varying between extremes and too cowardly to openly criticize anything.