Millennial Rage And Despair in I Hate You, Please Suffer

Naomi Norbez only wants to live in peace.

I’m a millennial, and I’m angry.

I can’t find a job, and I’m putting everything into attaining what capitalism calls “success,” but getting nothing back. Even worse, everywhere I turn I find news stories blaming millennials for just about everything: eating too much avocado toast, neglecting the golf course, not having kids, and overall being lazy. In reality, nothing could be further from the truth. We’re simply the victims of compounding economic crises and governments that hardly seem to care. Everyone my age (and younger!) that I know is struggling, and we’re all doing the best we can, but the deck seems stacked against us.

scitydreamer’s I Hate You, Please Suffer is an indie game that represents this plight with rage-inducing difficulty, intentionally shitty graphics, and a main quest that’s just about trying to pay rent. Playing it, you can feel the developer’s cry of millennial rage. It’s a game that captures the anger of my generation, and uses that to create an engaging, intentionally frustrating RPG Maker game that, even as a demo, might be one of my new favorites.

The game starts with an emotional gut punch: the main character, Ramona, loses her job, and then her landlord tells her she has to pay rent early or suffer homelessness as a consequence. She then sets off into the world to become a “hero,” one of many workers in this game’s world who slay monsters for money. It’s not much, and it’s a hard and thankless job. Really, the impressive-sounding title is more of an insult. But it’s a living, and it’s better than nothing, now isn’t it? 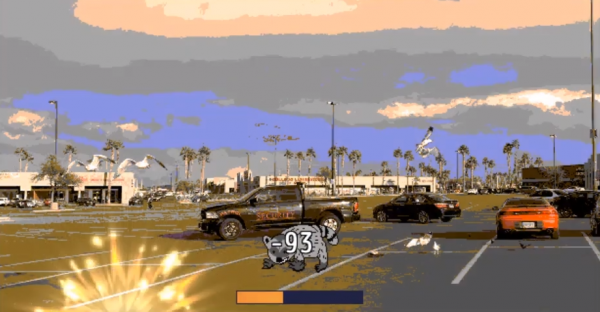 The monsters Ramona slays to earn her paycheque are far from the only threat in this unforgiving world. I Hate You, Please Suffer has a built-in economy system where everything costs money—even saving costs you a buck! It may sound very videogamey, but the truth is, being charged for the right to live feels sickeningly familiar. There’s something that feels real about having to cough up money to get hints on the main path, and scrounging around for as much cash as you can get by killing monsters—only to have to spend more money on healing items! Ramona’s financial stress is constant, and she has to pay for every inch she wants to get.

Her world has monsters, heroes, and magic, but it’s also grounded in reality, with shitty economies, rude cops, and struggling people. The game makes great use of this contrast to discuss more serious topics. In most stories, heroes are romanticized as fantastical warriors, capable of slaying any beast. However, in this reality, heroes are a needed class of people, essential workers in a society filled with monsters, but they are an abused group. They are underpaid and overworked, and many turn to hero work because of desperation to take a job, any job, to pay their bills. In that sense, there’s nothing unrealistic about it.

I Hate You, Please Suffer can be wrenchingly stressful to play, but it’s a game I really respect for having the guts to show how hard it can be just to live sometimes. I’ve certainly been through my share of rough patches, and I saw that reflected in how Ramona tries to pick herself up even when everything is against her. How even when she’s down to her last dollars, she knows she can’t just give up and turn to her parents, so she tries to make it as a hero out in the world. nd it is heroic, her struggle, even if the world around her doesn’t truly see it that way. That struggle is reflected in the brutal nature of the battle system. In this game, the fights are standard RPG fare, with one critical difference: enemies are tough as nails. When you start out, you are going to get your butt royally kicked unless you invest in healing items, and it takes time to level up your skills to the point where you can finally relax a bit. The game also doesn’t tell you critical information about fighting or equipping weapons, adding to the stress of the system. Furthermore, you don’t heal between battles: damage goes with you between each one, so you’re constantly being worn down. 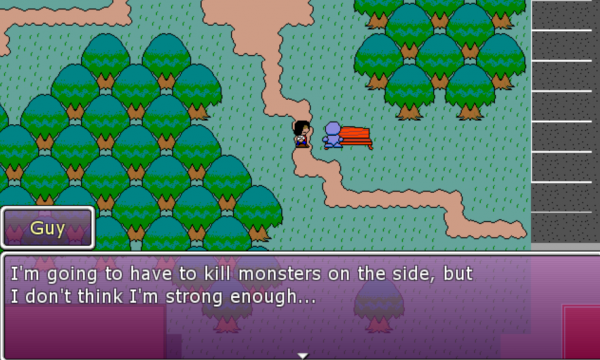 I’d argue the hard enemies and a lack of tutorial add to the experience, reflecting how it’s tough to jump in and be a hero in a world full of hardships. The enemies (feral raccoons, vengeful slimes, and even other “heroes”) seem to take on the gravity of all the things standing in the way of young people trying to live in this world—exploitative capitalist structures, underpaid positions, and the general vicissitudes of life—and all the hoops that must be jumped through. Life is hard, and sometimes overcoming it all feels like facing down a dragon.

That’s why it’s good to have allies. Eventually, Ramona can befriend and team up with a mute mage named Devon, and once he’s on your team, the game tends to get a bit easier. Not extremely easier, but easier nonetheless. If we’re going to make it in this world, we need the companionship and support of others. People who listen when you have struggles, carry you through when you need help, and fight by your side. I Hate You, Please Suffer demonstrates that rather nicely.

All in all, I Hate You, Please Suffer is about a generation that’s been royally screwed. By making the player suffer through both its gameplay and story, this RPG shows a heightened vision of how the millennial generation suffers today, how a generation that’s being screwed by the economy and a heartless society is trying its best despite all the odds against us.  It feels good to be seen like this, and it makes me happy I’m not alone in my rage.

Naomi Norbez, aka Bez (he/they) is a writer and game maker from New Jersey.  When he’s not binge-watching Netflix shows, he’s creating new interactive fictions, reading, or writing fanfic (again).  You can follow them on Twitter @NaomiNorbez.