Spinning and Grooving to Disco Nihilism in Disco Elysium

Jon Lancaster tries to find a way out of ideologically-driven dystopia.

As I reviewed Disco Elysium during my (first) pandemic summer, “stasis” was top of mind. Whatever their nominal ideologies, nearly all of the world’s political bodies failed to resolve the existential concerns of their populations, leaving them to sit at home, in a literal unmoving stasis, waiting to die from an invisible enemy. The pandemic has shown us that no nation’s technological progress or supposed ideological superiority can protect us from disaster, but how to break free of the status quo remains unclear. Disco Elysium suggests a partial answer, unpalatable to some: that pure faith in ideology may be worse than useless, that it’s largely composed of man’s—and, most often, men’s—commitment to his past mistakes and failures. The only true praxis is found in how each of us chooses to live out our days, adjusting and revising our understanding of the world through interaction and intellectual humility.

Stasis – “a stagnation or stoppage of the circulation of any of the fluids of the body, esp. of the blood in some part of the blood-vessels.” In medicine, stasis refers to a kind of death, but the ancient Greek origin also refers to a perpetual motion, a civil war where the body politic fights against and exhausts itself without productive resolution. In the aftermath of a heart attack, we consider only that the body is unmoving and dead, but the heart attack itself is an act of great disconcerted motion whereby the heart, increasingly desperate, slips out of synchronicity. The heart’s components now move against each other and fail to pump enough blood into the arteries. Stasis is a lack of motion, and it is also the useless and frenetic exhaustion that proceeds it.

Revachol, the setting of our protagonist, is the embodiment of stasis in both its pre- and post-death forms. A brain-eating pandemic parasite triggers a communist revolution in one of the great nation-states. The revolution spreads abroad. A great civil war between the supporters of the King and the Communards yields briefly to a victory for the leftists, only for their hopes to be extinguished by a foreign Moralintern (ostensibly centrist) Coalition. Opportunistic liberal capitalism fills the void like an invasive species, making a mockery of the war’s respective faiths. The new government erects no monuments to the fallen, nor does it even meaningfully repair the damage. The craters, just like the graffiti protesting the king, are allowed to stand as reminders, like proverbial golden calves erected to celebrate apostasy. 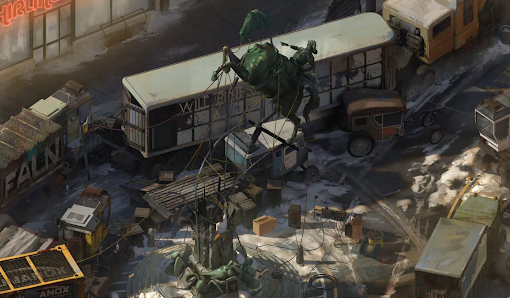 A broken monument to a dead king.

Following this great and deadly heart attack, there is some glimpse of a recovery. Like a mid-life crisis, Revachol experiences an economic boom as it transforms into a tax haven. It invents and embraces that great art of Disco. Capital transfuses like fresh blood into the arteries of its body, but before long the music stops and the boom times end, and the capital leaves for some new – healthier – host.

Woe to the Lost Generation for whom this is not prophecy but fact. Stasis—the ideological and political history of Revachol—is a heart attack that yields the depressive and terminal nation-state into which Harry DuBois enters. It is the continuing arrhythmias of a rump state in which the dockworkers’ Union’s struggle with corporate Wild Pines threatens to extend a strike into a war. Revachol’s troubled medical history contains the suggestion that no ideology or its praxis shall go unchallenged or be a miracle cure-all, and that if an ideology cannot stand up to its challenges, or fails due to its adherents falling too deeply into its excesses, perhaps that ideology ought not exist at all.

Revachol settled on an ambiguous, ineffectual Moralintern centrist order that leaves the population hoping for a return of something else without agreeing on or knowing what it is. “UN JOUR JE SERAI DE RETOUR PRÈS DE TOI” or “Someday I will return to your side” becomes the mantra of a defeated people waiting for the king to return… waiting for the communards to build up communism again… waiting for capitalism to trickle down… waiting for the Moralintern to act on meaningful improvement instead of just talking about it.

The player as Harry DuBois is free to say whatever weird shit that comes into his mind throughout the game, and Harry’s is very much a mind in turmoil as different aspects advocate for their own interests. The Thought Cabinet rewards the player for picking an ideology option enough times but also mocks the player for picking an ideology at all, including the most boring centrist one and the leftism that the game’s creators apparently favor. In a game update describing the political alignment system, the creators satire each ideology as a set of empty promises. Communism is for self-destructive melancholiacs, but liberal capitalism is for the greedy and materially-obsessed. Fascism is just a way for bitter people to grind their personal axes. And centrism, that’s nothing more than mealy-mouthed water-carrying for war and profit. This gameplay-mechanical view inside Harry’s mind suggests that political beliefs are just as murky, multi-determined and inherently conflicted as any of our thoughts. Even if we try to commit to a particular path, there will always be the nagging inner voices of the others. There’s nothing stopping any of us from encompassing multiple ways of thinking, and the game does nothing to enforce ideological consistency. 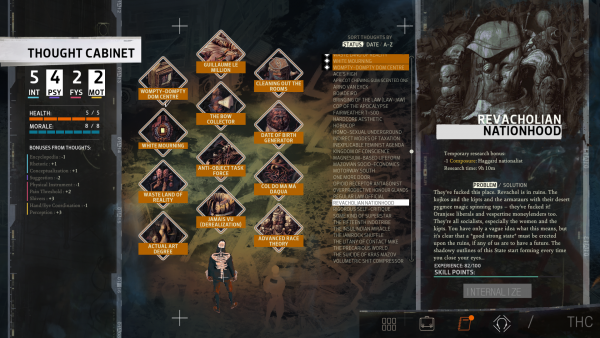 Why pick just one ideology when you can collect them all?

The most effective action comes from those who seem uncommitted to any ideological framework at all. Evrart and Joyce act as two opposing heads in the union strike struggle, organized in a fight of socialism against liberalism, but here too their praxis is often insincere and unconnected to their supposed values. Evrart is willing to kill and sacrifice pawns and allies in order to manipulate the events around him. He becomes a drug lord and a bully and flies flags like some fascist dictator at the first opportunity. He compromises with his own beliefs readily, which could be either a lesson in how communism perpetually justifies the ends to whichever means it pursues, or a pragmatic embrace of realpolitik. Joyce’s reasoning is unclear, but she gives in readily when the profit is incomparable to the risk of a war and essentially divests Wild Pines from the situation and port. Evrart wins, but his way of winning doesn’t necessarily make the world a better place or live up to socialist ideals outside of the narrow slice of Revachol that he directly controls. Both characters’ pragmatism in their roles supports a certain level of flexibility, as either could have been written as if they had some other central ideology, or none at all.

And when Harry lights up the literal red oil on the streets where “UN JOUR JE SERAI DE RETOUR PRÈS DE TOI” is written, Evrart presides in his port-castle counting the bodies from the Mercentary Tribunal where he sacrificed his henchmen and, it seems, proceeds to await the announcement of his success and takeover of the port. Evrart waters down his communism into a palatable socialism and emerges as a drug-lord-dictator-union president chimera, whose praxis is without a commitment to values.

The case and the game resolve when Harry returns to the mainland and submits himself for evaluation, and in the tense moment where Harry has to answer for his actions, he is judged only for his role as a detective, and the world-historical washes away and sublimates into irreverent and incorporeal background.

There’s a tendency for political science to focus on ideology first, then praxis and action, so that the outcomes of one’s actions can be tied to one’s stated values. But in Revachol, those who set out any consistent grandstanding values fall short on their face and mainly perpetuate the stasis that crushes the people and disenables either meaningful individual or group progress. 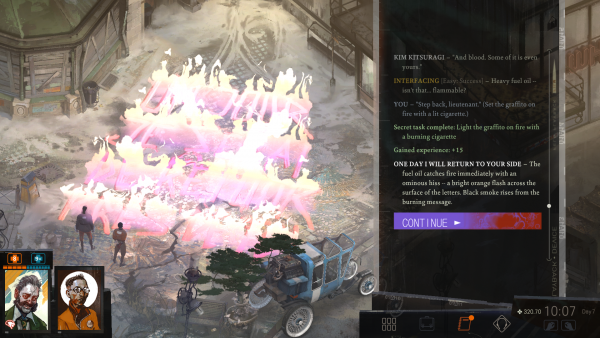 Returning some light and awe to the streets of Revachol.

There’s a sense that this can come off as nihilistic and hopeless, but that is in part because the modern nation-state has replaced the worship of God in religious institutions with the worship of ideology in the state. To say that ideology is meaningless, or that it invites frenetic conflicting activity without purpose, appears as radical as to say “God is Dead.”

But having acknowledged that the modern God of ideology is dead is also a statement of hope, to offer instead of the return of some sought-for state organization, that one may advance on one’s own and be judged by one’s actions according to the actual method and outcome. Or perhaps instead, there is the hope that in challenging the player in their ideology, that the player becomes less vulnerable to the whims and ways of each day. In either case, the path forward is shown to be something that can’t be argued in a discourse or written in a book but that must instead be lived out in the world.

Ideology is fundamentally a type of modern, invented faith. Ideologies and their tenets often are shaped by events that occur during their formation, and reasoning is simply invented after the fact. Social science has a name for this: path-dependence. In the pandemic, I have witnessed the birth of one such ideology. The US initially recommended against wearing masks, claiming that it deprived healthcare workers of needed PPE. Though the US CDC quickly walked back that statement once supplies improved, other officials doubled down, and anti-mask feelings were strengthened by a seeming ideological stubbornness of a government that justified its claims only because they made these claims before.

Yet for as much as we see that ideology creates problems in its capacity as a faith, we are also reluctant to give it up entirely and release its supposed benefits. In the US, the myths around Founding Fathers are held to be a birthright to the nation, one that created cults of personality from extraordinary events. George Washington, the new nation’s first president and wealthiest man, stepped down after two terms, refusing the offer and opportunity to become a king. By doing something extraordinary in giving up power voluntarily and proactively, Washington created a precedent that lasted for hundreds of years and norms that outlasted even the political challenges of the recent past. Individual actions and charisma became enshrined and systematized into a democratic ideology and set of norms, one that has since gestated into a doctrine of its own and reshaped the world in ways Washington himself could never have dreamt. 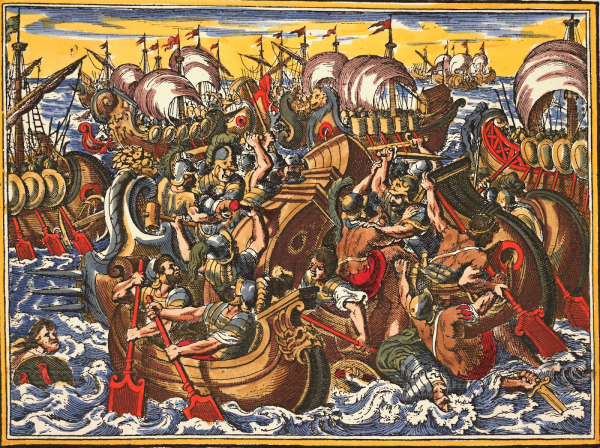 The Athenians and the Spartans knew a thing or two about stasis. (Source: National Geographic)

Ideology imposes restrictions and claims upon its adherents, offering both a commitment to something firm and a type of enslavement or inflexibility based on one’s past beliefs. As a faith, it provides guidance for the naïve and norms for the uninhibited but also creates blind spots and complacency for casual laity and violent dangers from zealous adherents. Disco Elysium would suggest an alternative: a world in which one’s commitments are primarily to doing well in one’s role, and where ideology or faith is best treated as a frame—which one shapes as much as one is shaped by—rather than as a suicide pact.

Jon Lancaster is a double maroon undergraduate and graduate of the University of Chicago’s School of Economics and Booth School of Business, as well as a budding Renaissance man.

Tags: Disco Elysium
← Neither Snow, Rain, nor Gloom of Ghosts: Death Stranding and the Weight of Work
Millennial Rage And Despair in I Hate You, Please Suffer →