Joe Köller admits to his biases.

Full disclosure: Nidhogg was the subject of much anticipation in the indie gaming circles I move in. I didn’t play any of the versions that were exhibited at events before the game’s Steam release, mostly because I didn’t attend the events in question, but I still caught whispers of the game’s existence. Enough to learn that it was a two-player fencing game, but not enough to divine how it worked.

However, my initial attitude towards the game was undoubtedly colored by the reverent tones in which it was discussed, and the jokes shared among friends. For instance, shortly before deciding to buy the game, I recall being very amused by this discussion thread on Steam, which was shared on Twitter, though I do not remember by whom.

I am, in general, predisposed to like these kinds of local multiplayer games. I spent many hours of my childhood in front of a Nintendo 64, playing GoldenEye with my siblings, or Mario Party 2, Vigilante 8, and Tony Hawk’s Pro Skater with friends. The demands of adulthood, or pretensions to adulthood, have made these gaming sessions something of a rarity in my life, but I still play GoldenEye with my family, and we’ve expanded to Rayman: Origins and Rayman: Legends as well.

For several years, I celebrated my birthdays in my hometown with a couple of friends from high-school, a bottle of vodka, and Super Smash Brothers Brawl. I haven’t gotten around to it this year, but I made time instead to celebrate with friends and fellow writers from Vienna. We played Starwhal, Samurai Gunn, Speed Runners, Spelunky and more Starwhal. I had never played Starwhal before, but my positive first impressions may have been tainted by the connections my drunken mind made between the game and the people I played with, who I care for rather a lot.

I first played Nidhogg on my own, but I squandered the opportunity to write about it then, when my biases were still minimal, and I cannot reverse-engineer the opinion I may have held at the time. I can only hope that outlining the path of my many divergences will be enough to lead you back to that first, pure verdict. 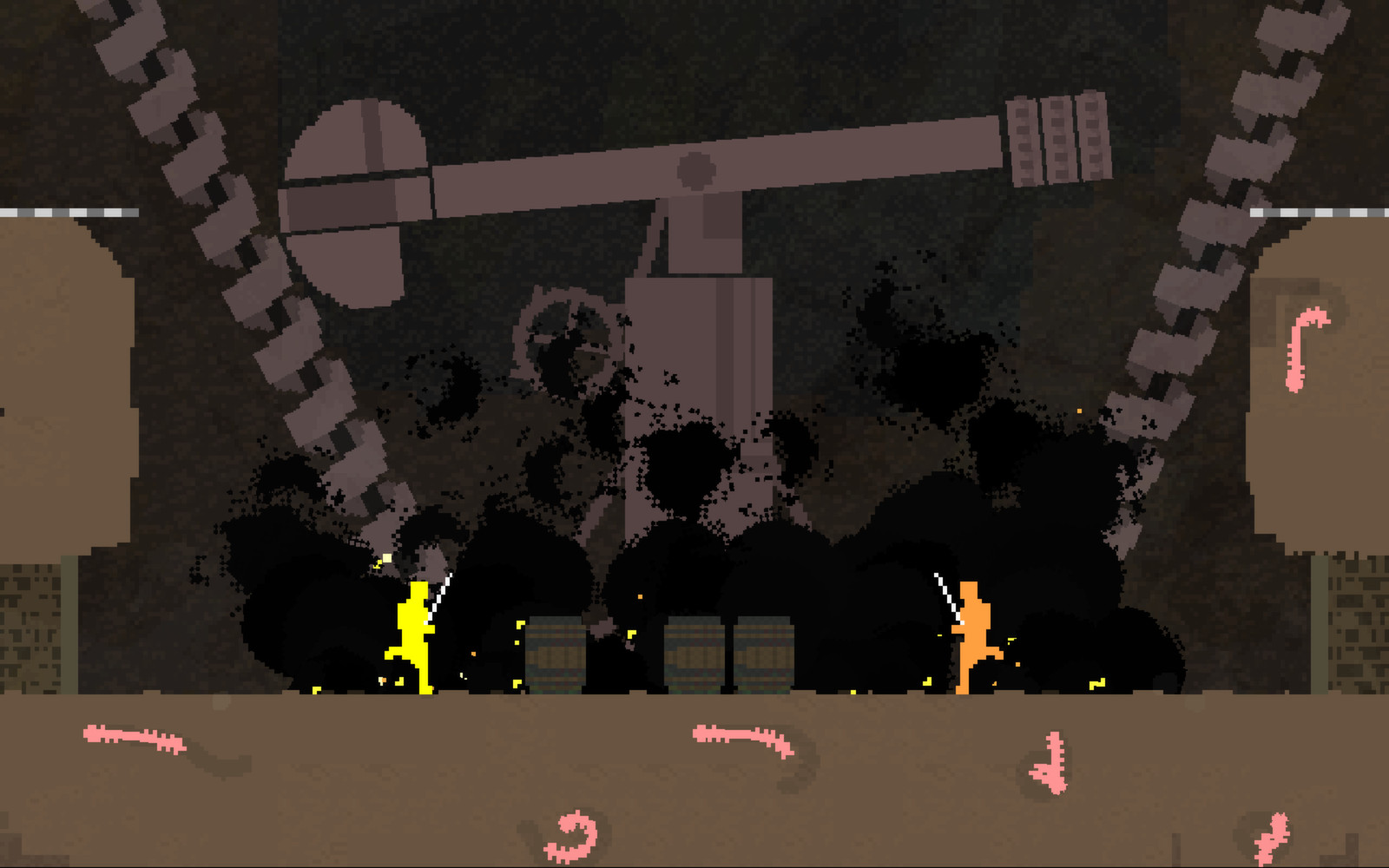 After a few practice rounds against bots, I was overcome by the nepotism that governs all my actions, and challenged somebody from my friends list who happened to be playing at the time. I won, rather decisively, and thanked him for the game. Then I decided to balance this match with a properly impartial test, playing against a stranger. I lost, and learned about the significant latency issues that benefit the person hosting an online game. However, I’m not sure this realization managed to entirely undo the damage my earlier, unfair victory had wrought on my opinion.

I rarely played Nidhogg after the first week, mainly because opportunities to do so with an opponent seated next to me rather than one connected to me through treacherous wires (I am talking about the internet, in this case) were few and far between. Though I may have played it on my own a few times, the next swordfighting session I distinctly remember took place between me and a former partner.

We played Nidhogg at my place. Maybe Samurai Gunn too. We cursed, yelled, and gestured wildly. Probably the closest we ever came to a real fight. Eventually we stopped, and I asked her if she couldn’t stay and cuddle for a while before leaving. I might have already known she wasn’t really into me, but I guess then I wouldn’t have been surprised to hear it a couple of weeks later.

I think she won. The game, I mean.

It wasn’t a terribly good relationship on the whole, but I still treasure some of the memories that came from it, and this might be one of them.

Beyond playing the game with lovers, I also indulged in playing it with friends and colleagues at A MAZE Festival. “Indulge” might be the wrong word though: it would be more accurate to say that we made plans to play Nidhogg, but decided against it when we saw the queue that had formed. At various points throughout the evening one of us would say “Nidhogg?,” and we’d go to have another look at the queue before leaving dismayed. Eventually, crowds had thinned out to the point where we could set up a four-player tournament.

I lost in the first round. 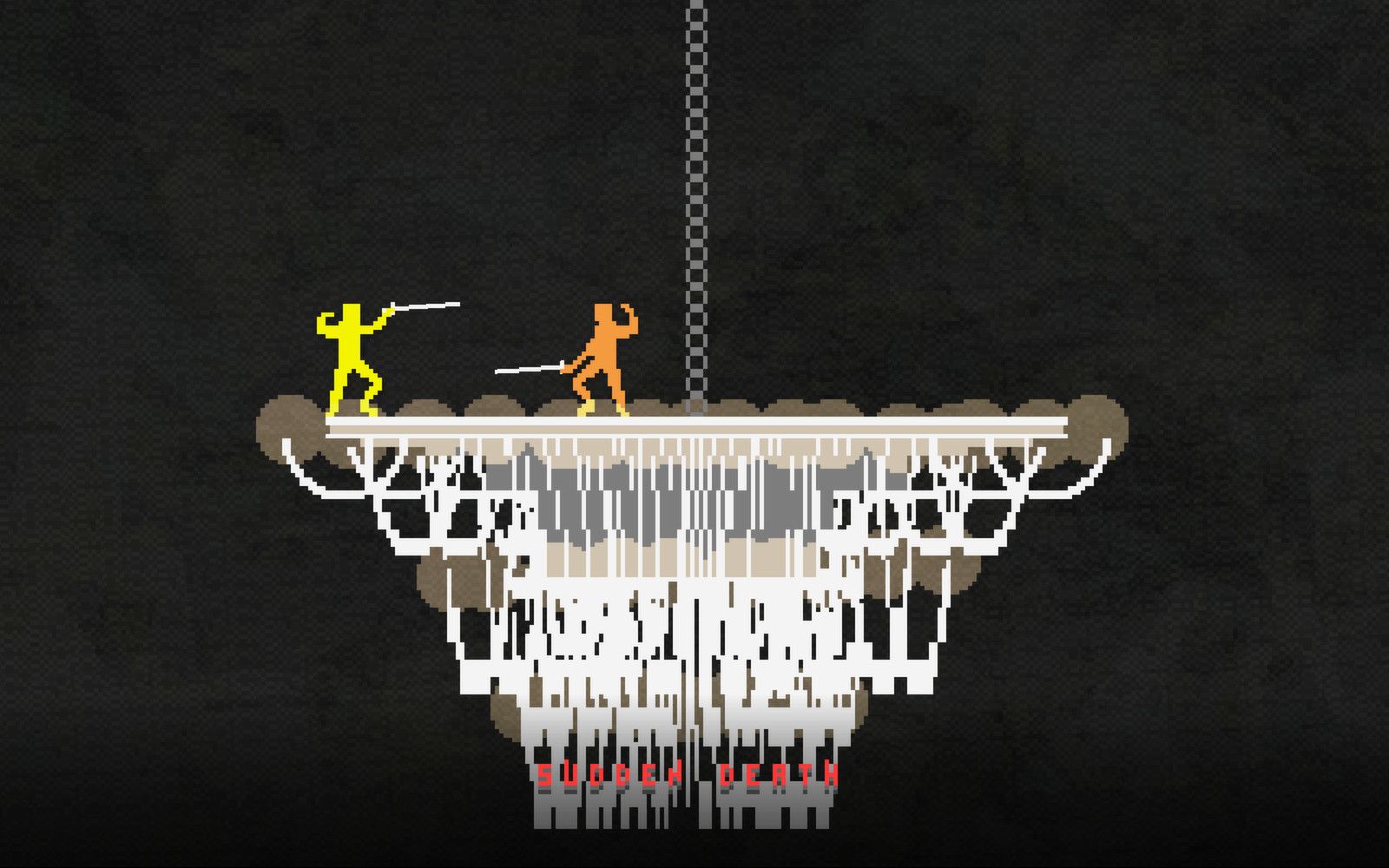 However, I would probably have been more upset about this had it not been for the delightful company I was in, and the general atmosphere at the event, so it’s likely that my review of the game should be a little angrier if you account for these biases. You will have to keep this in mind, since I am sadly unable to adjust my own perspective accordingly, and to divorce my opinion of the game from the circumstances in which I have played it.

My perspective on this game is colored by the kind of person I am: one that likes these kinds of games in general, and whose life choices have also led him on the path of both having heard about and bought this specific game. My opinion is likewise entangled in my relationships with the people I have played it with, and their opinions of Nidhogg, which are themselves influenced by their own entrenched dispositions towards these games.

Our shared appreciation of this game is further mired in our mutual – and at times short-lived – appreciation for each other, which is founded on a selective bias towards liking people with whom we share certain views and interests, and whose personalities match ours, but also deviate from it in pleasant ways. Beyond that, I would never have gotten to meet some of these people if not for my decision to be an active participant in the discussion surrounding videogames, rather than a passive observer of their ways.

Now on to the review:

Nidhogg is good fun, with the right people.