A Game For Vegans

A look at A Machine For Pigs’ plot trappings. Heavy spoilers.

Yesterday, I finished Amnesia: A Machine For Pigs, and by “finished” I mean “chickened out of the game after one of its rare encounters, and then watched the remaining half on Youtube.” Playthroughs without intrusive commentary are actually a pretty good way for somebody as easily scared as myself to enjoy this kind of content: I’m not about to argue that an ambulatory narrative experience like A Machine For Pigs might as well be a movie, but it’s not exactly a mechanically rich game, either. It may put a few obstacles in your path, but its mechanical core is the Dear Esther concept of movement as narrative progression, twisted by horror context. Your primary interaction with the game is forcing yourself to walk on, in spite of its spookiness.

To be able to automate that decision and just observe the creepiness adds a great deal of comfort. I’m glad to have somebody else shoulder the scary stuff. On the other hand, I am less glad to also have to rely on them for puzzle-solving, or attempts thereof. In the case of the playthrough I watched, these involved forgetting how to deal with recurring obstacles and ignoring a blinking, ticking red button while running back and forth across the entire level, at which point I further marred my experience by fast-forwarding in frustration.

Still, even if I felt compelled to cut down my guide’s wandering about and had to pause the video when it turned out they were either a very fast reader or terribly uninterested in the documents they found, I likely would not have seen the end of A Machine For Pigs without them. I write this not only to laud the existence of such recordings, but because my bravery by proxy has led me to believe I have something to say on A Machine For Pigs. Not on its scare factor, for which I am undoubtedly the worst judge, but on its story beats. For the purpose of this, I will discuss the plot explicitly and in much detail, so if you want to go unspoiled, it’s best you abandon the article now to go play the game. Or, you know, watch somebody else play it. 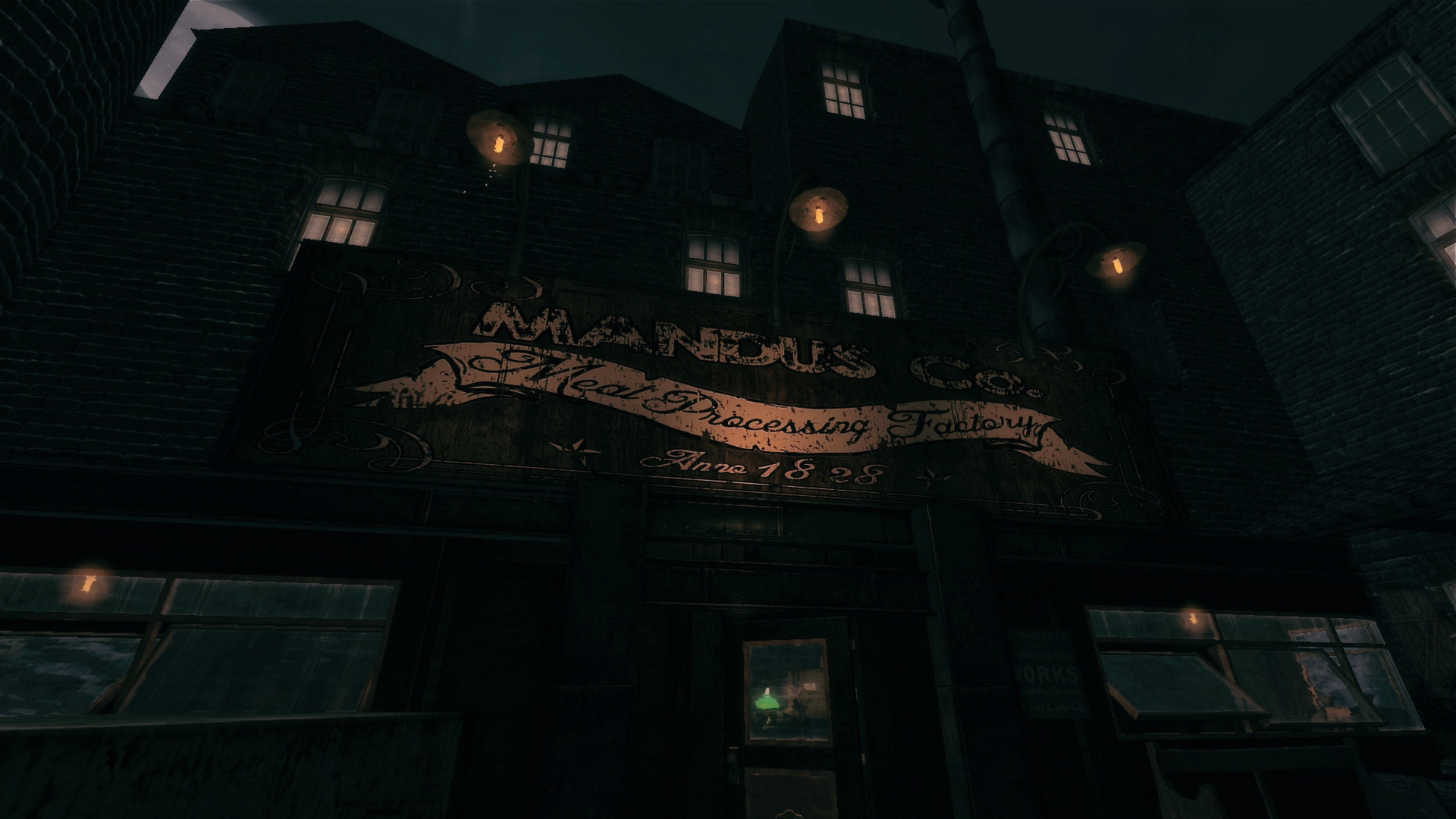 There’s a lot I like about A Machine For Pigs, leaving aside that I am entirely unable to stomach it. I like the turn of the century, early industrialization setting, both in aesthetics and theme. I like the idea of Frictional Games handing their property to Dan Pinchbeck, because it shows they seem to understand good writing is paramount to horror, more so than any other genre perhaps. I like that the game, in the words of our own Andrew Huntly, relies less on panic and overwhelming you, than on the sense of dread that slowly builds around its revelations.

Unfortunately I feel the game could have done much more with its contemporary implications and ties to reality, and instead chooses to dabble in the supernatural. What could have been about real, widespread and “necessary” evil instead deals with absurd absolutes and the comically diabolic.

Most of the game is spent trying to uncover the nature and function of its titular machine. You play as its creator Oswald Mandus, an industrialist in the London meat business circa 1899. Woken from feverish sleep by memories of your children and an oddly familiar voice on the telephone warning you that they are in danger, you set out to find them and repair the damage done to your creation by an unknown saboteur. In due time it is revealed that your children are long gone, the voice is not your friend, the machine is evil and the saboteur was yourself, hoping to stop what you built before it’s too late, a feat you will have to repeat after repairing your first attempt.

Most if not all of these are easily predictable horror set pieces. The game is under a certain obligation to make sure things are very, very off and it should come as no surprise that the inexplicably intricate machine at its center does not turn out to be an oversized soap dispenser. But its exact purpose and Mandus’ goals in building it turn out to be far removed from the game’s modernist undertones, building instead on the archaic and fantastical lore provided by its predecessor The Dark Descent. 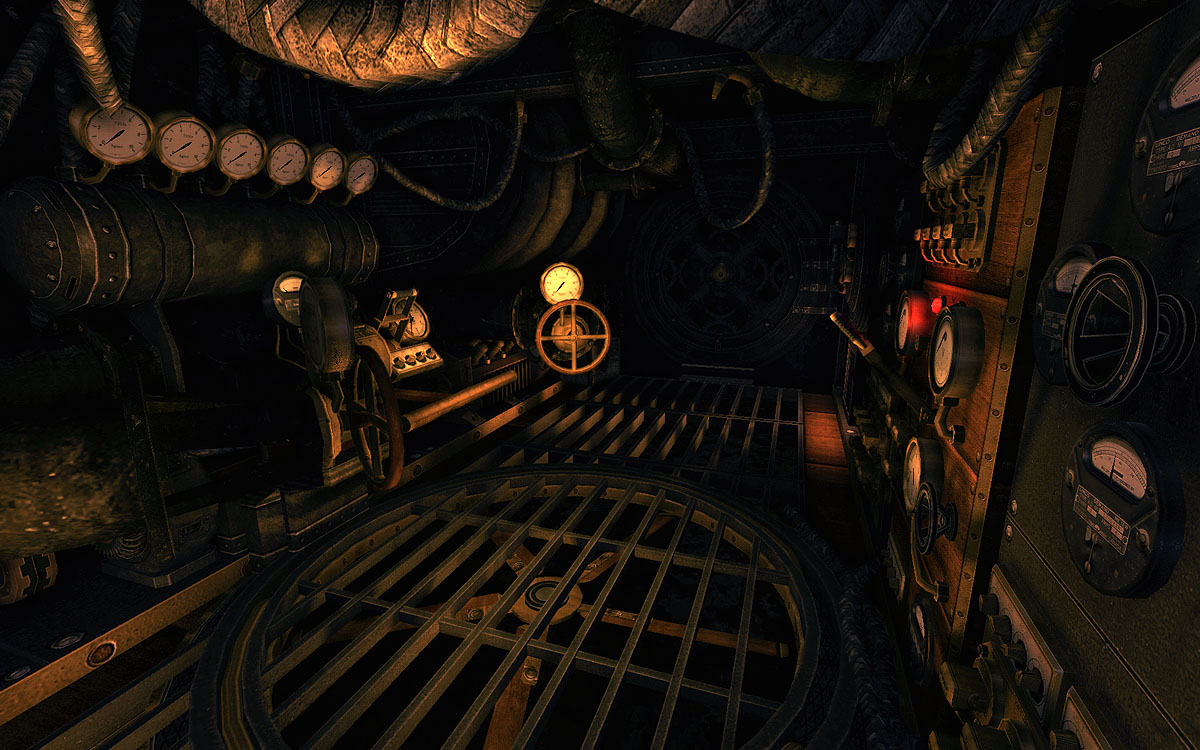 Before its late-game revelations, hints strewn across A Machine For Pigs, which Mandus ignores rather steadfastly, build a lot of tension through seemingly contradictory accounts: documents of his madness, of plans to rebuild the world, place mechanical gods in charge of it and end human suffering by force, mix with tales of his altruism and generosity, of how his charity works feed the poor and the expensive safety measures added to his factory have brought him to the brink of financial ruin.

This conflict is never resolved and the contradictions never reconciled. Mandus descent is not about good intentions perverted through extreme measures, but turns out to be an unrelated stroke of madness, brought about from on high. It might have been the death of his wife, a very real and relatable event, that started it, but the real catalyst of his transformation was a trip to Mexico and the steps of an Aztec pyramid, where a stone egg, ostensibly another one of the orbs the first game was built around, revealed to him all the carnage of the coming century and caused him to preempt the death of his sons in World War I by slaying them both.

His mind usurped by evil spirits, he returns to London to repeat the sacrifice on a much larger scale, using technological innovation to automate the process. Inserting the orb into the machine to give it sentience rids him of the side it brought out and returns him to his god-fearing self, which consequently has to deal with the creation of this ancient demon during the events of the game. What at first appears to be the bizarre product of the reality of industrialization and progress is revealed to be the demonic vision of a fantastical being.

I find this turn towards the supernatural unfortunate because it takes away from A Machine For Pigs’ discussion of reality and modernity. The game is, on the surface, still about mechanized murder, but it is mechanized murder in the name of ancient, archaic blood gods. Automated human sacrifice. This is no condemnation of humanity’s enlightened future so much as its ignorant past, of the false idols we once hoped to appease. At best, it is an all-encompassing attack that assumes human nature entirely unchanged and unchangeable, by showing technology abused and perverted to uphold savagery, when it could have examined how brutal even our modern, noble applications of it are. 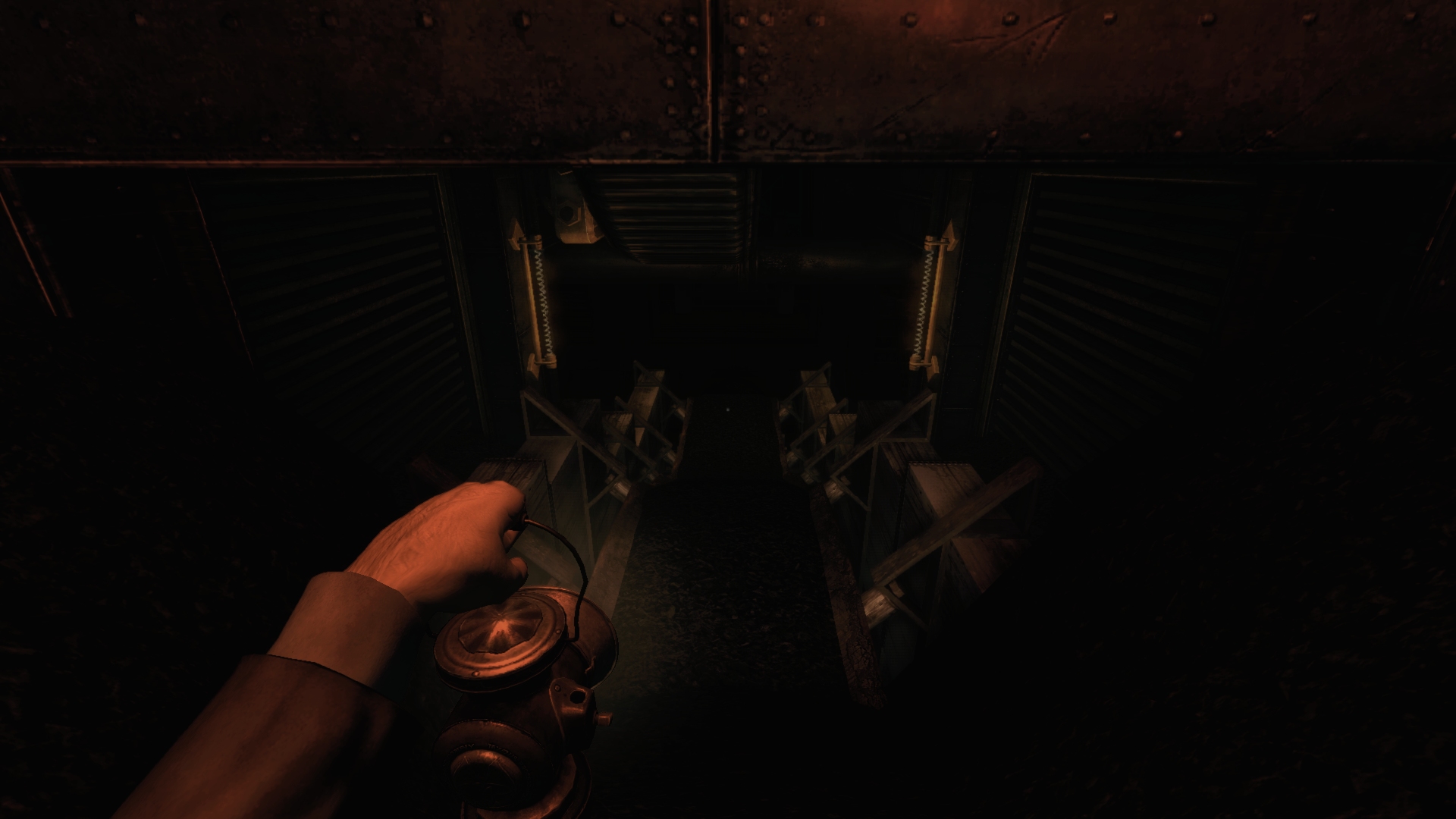 Very little poetic license is required to turn a look at slaughterhouses, which the game is built around, into a horrifying experience. Even devoted carnivores tend to shy away from depictions of the reality of the meat industry, of animals penned up with not even enough room to turn around, living their entire lives in darkness and filth. A Machine For Pigs seems to understand all this: references to “produce” being pacified with electric shocks and music being used to calm both workers and animals are based on real practices, or close enough to reality to be perceived as such. Only these are pretty rare compared to more standard-fare scares: the guilt-ridden protagonist, the hallucinated children, the misleading guide.

Despite my own views on the subject, I am not insisting that the game ought to have included an anti-meat message, but I do find it strange that it felt the need to exaggerate in order to criticize industrialization, when its real applications, past and present, are already pretty gruesome. Early hints led me to develop some theories of my own about just what the purpose of this machine might be. An attempt to solve both overpopulation and famine by feeding London to itself in a kind of pig-eat-pig society? Part of a scientific experiment to undo the formative deaths of Mandus’ life, those of his wife and his sons, as documents about the revitalizing effects of Compound X hint at?

I must admit that the creation of not a workforce, but an army of pigmen intended to bring about the apocalypse and offer all of humanity on an altar of stone and blood was not on my list. Both the capitalist and socialist ideas present in Mandus’ works go ignored in this, and descriptions of successful resurrection end up leading nowhere: Compound X is apparently only of use when it comes to creating hideously mangled manpigs, and to aid Mandus in crossing every imaginable boundary just for sake of it.

To me, this fascination with the fantastical, with ancient evils and alchemy, hurts A Machine For Pigs’ portrayal of real evils: of child labor, poverty, disease and hunger. The game distracts from these banal, commonplace problems by creating an antagonist as outlandish as the machinery required to move it, fuelled not by any relatable motive but a universal, devilish hatred for all of humanity. It may speak of “saving” it, but not even in fanatical terms so much as plain lies. Its idea of saving is to get rid of that which it sees as irredeemable. To burn all to the ground and begin anew in the ashes. 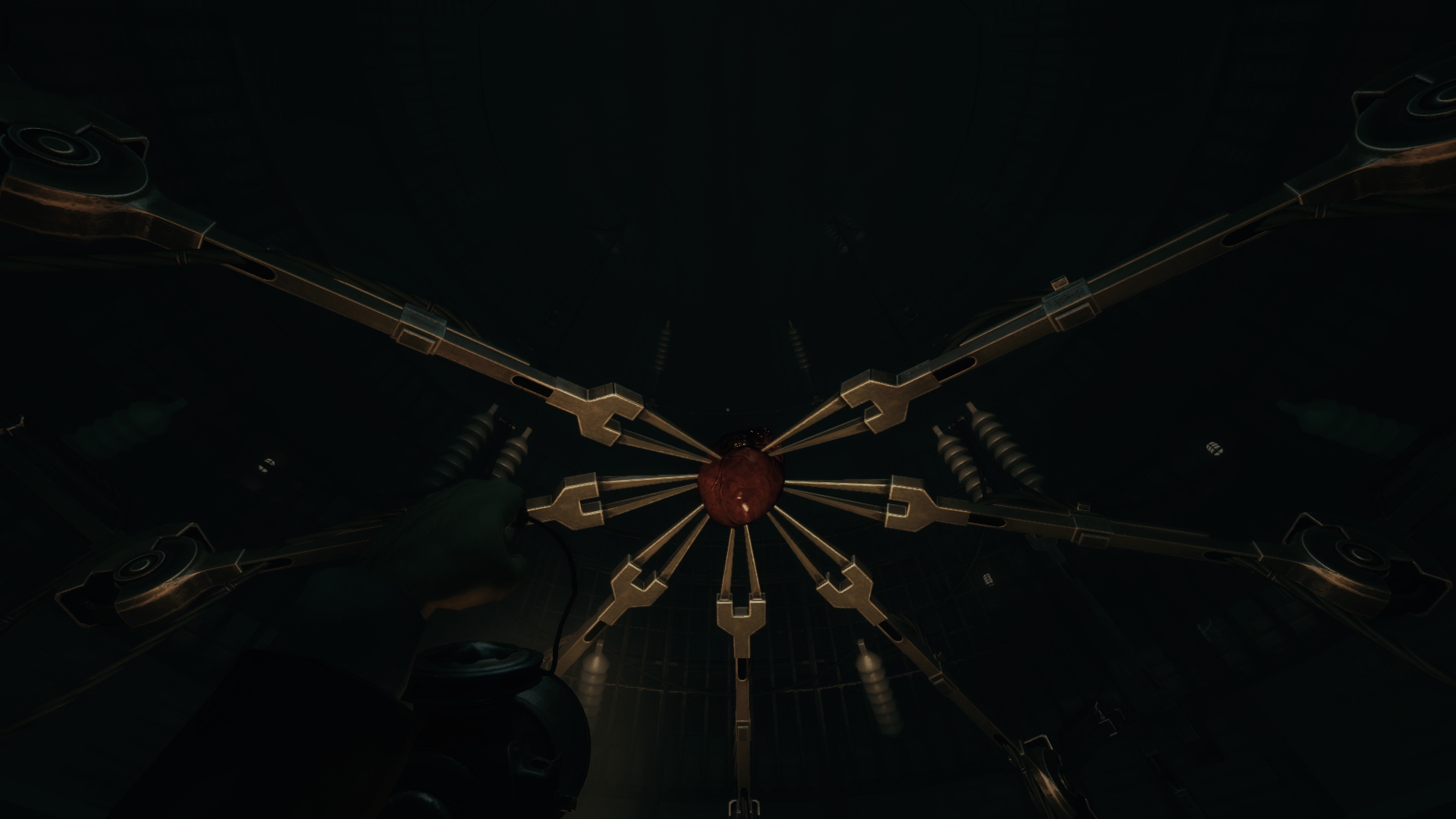 Of course, the nature of these far-reaching revelations leaves plenty of room for speculation on ambiguity. Hardly anything about the events in A Machine For Pigs is ever stated explicitly, it is inferred from hints and requires much conjecture, which I admire. But elusive as it may be, at the core of it all remains one version of the story. You can doubt that tale, claim that its fantastical elements are actually imaginary, an argument that I find is applied all too frequently and to little effect to all videogames, which fake another reality by nature, and especially those which leave doubts as to the sanity of their protagonist.

Even if I was inclined to believe it, this is, at best, speculation on what the game isn’t about. It might indicate that A Machine For Pigs  is less obsessed with ancient mythology than I am inclined to believe, but it does not fill the thematic void left by imaginary content. The question of real or not doesn’t change the implications of what we’re seeing, only whether they apply to the world painted by the game, or only the mind of its protagonist.

The truth is rarely a virtue for horror games, because it tends to be more boring than scary. Perhaps A Machine for Pigs is that rare case though, as it touches on a part of reality that is every bit as gruesome and horrifying as fiction could ever hope to be. I would have liked to see it tackle those demons instead of creating its own.