Crawl, Nidhogg, Jackbox Party Pack, Broforce, and Mount Your Friends are having a ball in today’s look to the past.

For a game I love quite so much, I’ve played surprisingly little of Crawl last year. It’s hard enough to set up local mutliplayer games of the intuitive variety, and this is the type that takes a while to get going, plus several matches to really get into the swing of things. A couple of slides at the beginning of the game cover the basics of its competitive dungeon crawling – one player’s the hero, the others take control of monsters and traps, kill the hero to take their place, etc. – but getting to know the various monsters, items and special abilities in the game simply takes time. With busy friends, it’s hard to find the time to make time, at the same time.

It may be almost impossible to set up an ideal game of Crawl, which would require a dedicated group meeting regularly for this exact purpose. The games I have been in have often suffered from a wildly uneven distribution of experience, which makes it hard to tell whether the game’s funky balance and rapidly shifting power dynamics are working as intended, or a side-product of confused groups. The constant back and forth is delightful either way, but matches often end in unsatisfying draws regardless of prior events, because of how disconnected the final bossfight feels from the rest of the game.

However, Crawl’s asymmetrical approach to multiplayer is still one of the most interesting concepts I played last year, ripe for endless gloating. Despite its weird role as an overly complex party game, it’s well worth a look for the charming quality of the production alone. Have you listened to the voice-over on its trailer yet? 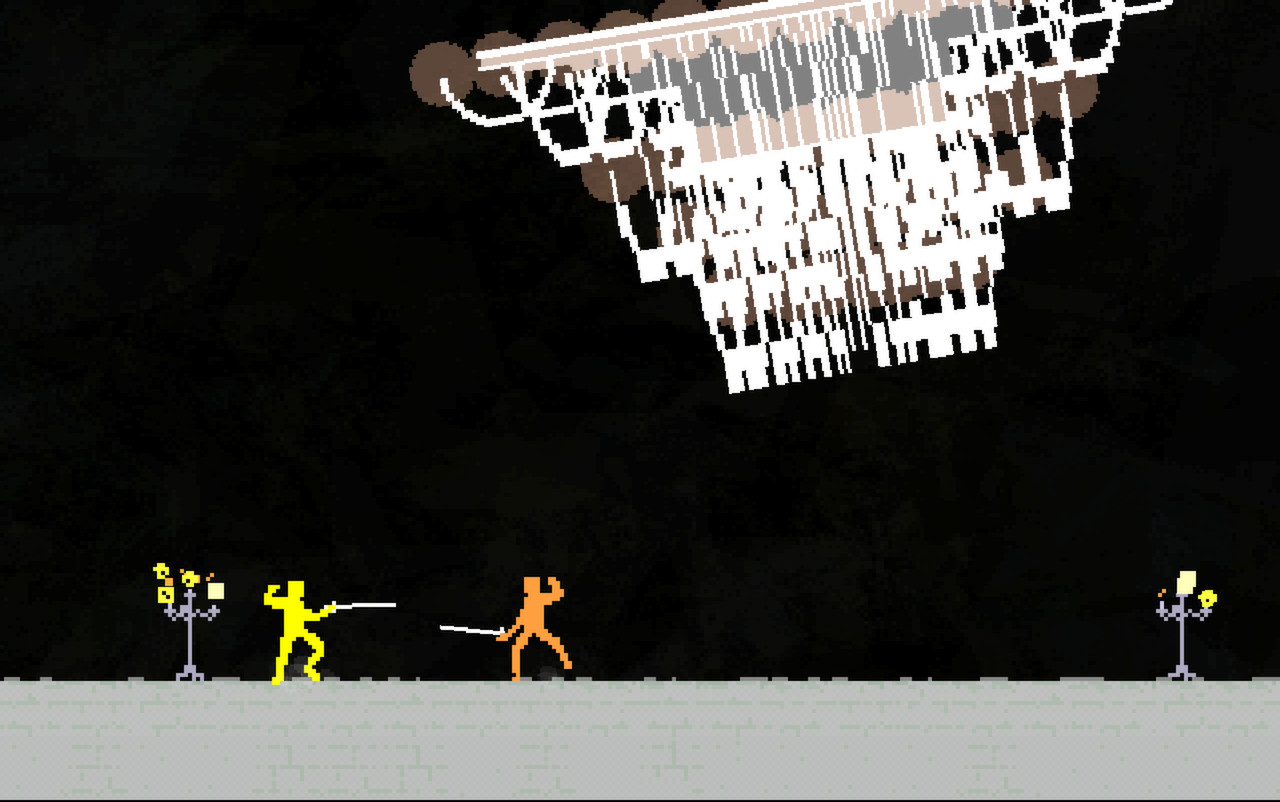 What a marvel Nidhogg is. Bouts can last anywhere between 2 minutes, when death comes swiftly at the point of an opponent’s blade, and half an hour, that leaves the participants with frayed nerves and adrenal glands set to maximum. Nidhogg‘s true victory comes from making players feel like they have endured a classical fight to the death. The fact that you’re sitting behind a computer screen becomes somewhat irrelevant.

The game would not have achieved what it does had it not been so easy to pick up and play. While familiarization with how to properly wave your sword about helps, two novices thrown at each other will get near enough the same tense and exciting experience as those with many hours in the arene under their belts. There are no combos ot flashy announcements. The most complicated maneuver to pull off is throwing your sword at your opponent, which is both undignified and rather ungentlemanly.

When this gambit fails to connect, the fight will take on the appearance of a common street brawl. Whether you are thrusting your sharpened piece of metal into an adversary’s gut, or having your neck snapped, we are still simply revelling in violence. We’ve been labelling violence as sport ever since a couple of naked Greek men decided to wrestle one another. Plus it’s hard to condemn when the violece is this much fun. Embrace the wyrm!

Corey Milne loves writing about games because he thinks they could be really intelligent, and be used to cross cultural barriers, if they weren´t so bloody stupid a lot of the time. He very much enjoys being Irish and currently lives in Scotland, because he’s kind of stuck there at the moment. 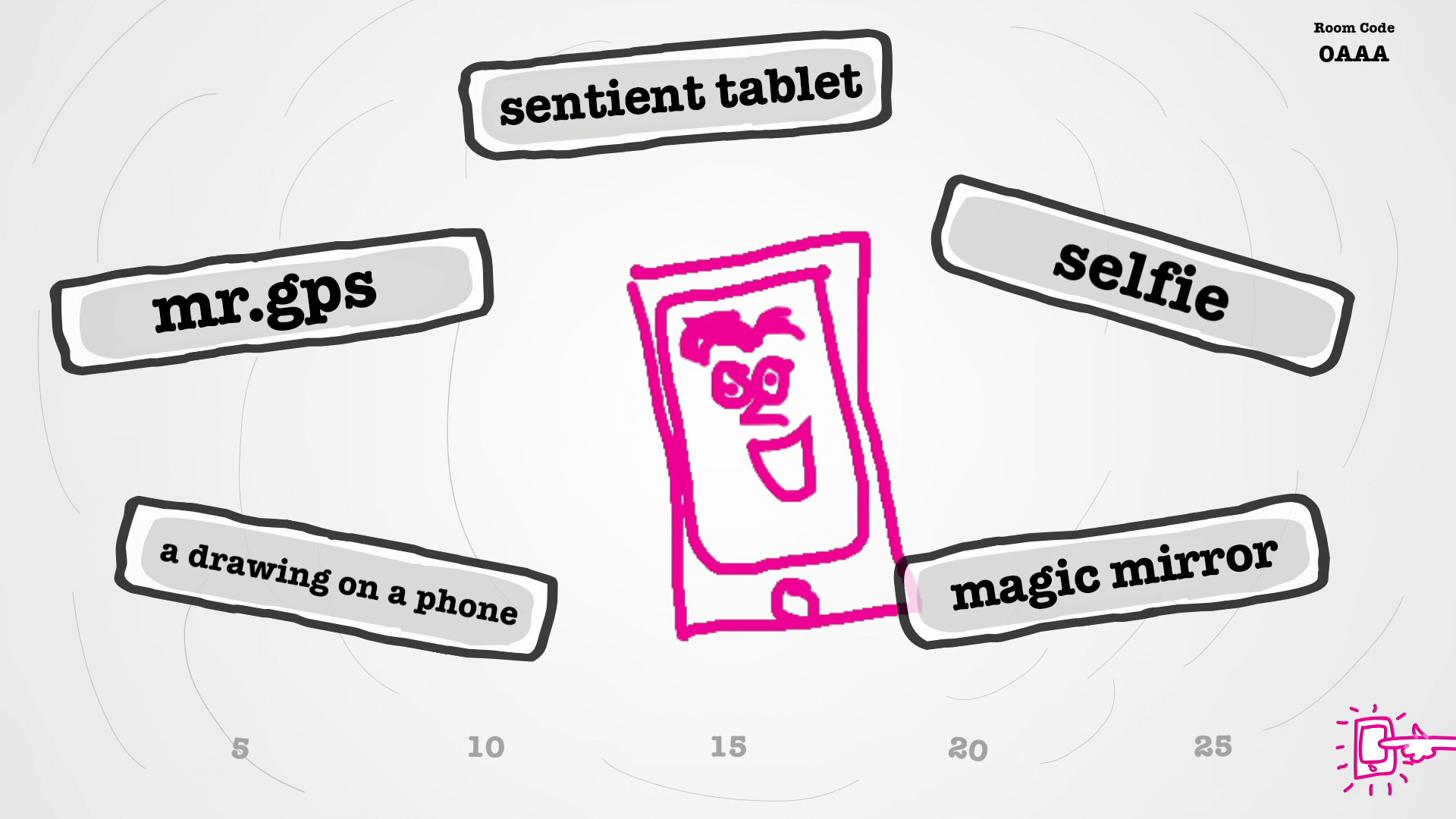 Ever since the inception of the smartphone revolution, dynamic integration between the tiny supercomputers in our pockets and their larger cousins beside our televisions has seemed a noble but unreachable goal. How funny it is then, that Jackbox, a company best known for its somewhat fawning reliance on a decades-old franchise, was able to crack this particular nut. The five tiny games that make up the Jackbox Party Pack represent the wacky minds behind You Don’t Know Jack in full creative force, complete with absurd premises, immaculate presentation, and everyone’s favorite host, Cookie Masterson.

Though the rather simplistic Fly Swatter and Word Spud seem more like proofs-of-concept than fully-fledged games, the three other titles promise hours of fun for the more creatively-inclined. Two of those three might be familiar, however: both Fibbage XL and You Don’t Know Jack 2015, as their names imply, are robust content updates to previously released games. While You Don’t Know Jack’s bizarre mix of quiz-show trivia with dregs of pop culture still compels today, it’s the duo of Fibbage and Drawful that make this package a must-buy.

Both have similar premises – the game offers a silly prompt, the players devise reactions to that prompt, and then they try to determine which of the strange answers is factual, with players who successfully deceive others being rewarded for their efforts In Fibbage’s case, the prompts are usually bizarre news stories or historical facts – for example, did you know that the city of Topeka in Kansas renamed itself Topikachu in 1998 in honor of Pokemon? Drawful’s substitutes Fibbage’s wordplay for Pictionary-inspired sketching that challenges players to label the misshapen scrawls of their peers. If you thought an anteater was hard to draw, just wait until the game throws something like “these toads are obese!” at you, punctuation included.

For all of Jackbox’s scripted hilarity, it’s the way it facilitates witty interplay between good friends that makes it such a complete multiplayer package. With nearly every multiplayer game emphasizing twitch reflexes and nothing else, it’s nice to have a game that even my whip-smart but controller-shy grandmother can participate in. It brings people of all stripes together in a way that almost no game has ever done, and that alone is enough to justify it being one of the best games of the year. 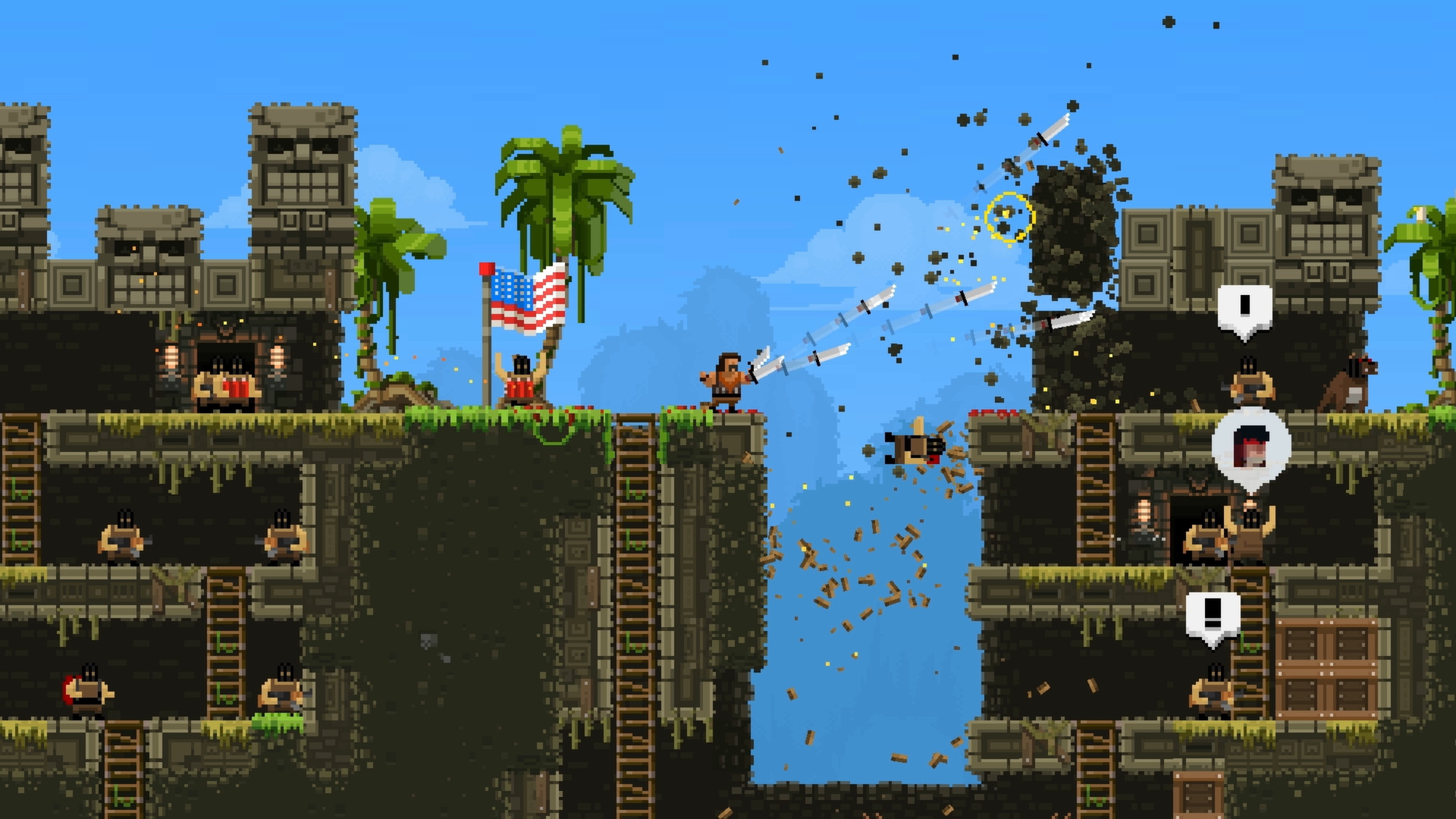 When I was working my first part-time job, I had a group of friends with whom I would sit and watch every Steven Segal movie we could get our hands on. Yes, he’s still making them. Yes, they’re as bad as you think they are. And yet our appetite for broken arms, leather jackets and adolescent catchphrases was insatiable (Imagine my awe when the credits of Kill Switch flashed the name of a distant cousin in the role of the villain).

Action films from the Reagan years espouse a long-lost brand of jingoism. Since the turn of the century Hollywood has reprinted and resurrected everything from the ’80s it could get its hands on. BroForce demonstrates why the blue-collar patriotic action hero is one of the last things in the time capsule that hasn’t been taken out.

BroForce is a nostalgic parody of the ’80s action popcorn movie and sidescrolling shooter. The player takes the role of one of several pixelated Bros, a caricature of an ’80s film icon, each with special abilities. Beginning on the left of the screen and ending on the far right, the player must kill everything on the way to the level’s end before planting an American flag and flying off as everything below is bombed for freedom. It’s as fun and ridiculous as it is upfront about its subject matter. The hyperviolent testosterone worship is bound to be endorsed by many of its players, but it winds up being fun while making fun of itself. Probably not for those with an aversion to hilarious puns though. 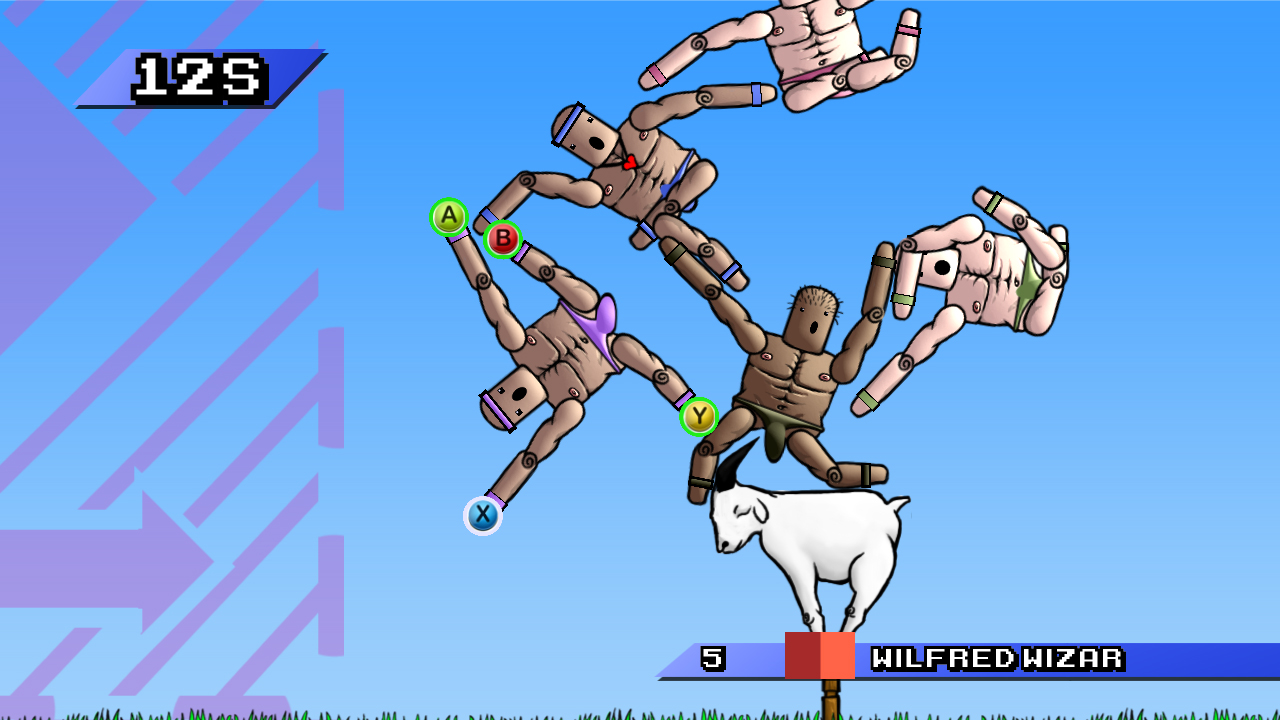 Amongst the crowded competitive-human-pyramid-building genre, Mount Your Friends undoubtedly has the most incongruous soundtrack of 2014. As you and your friends take turns to hurl grotesque ragdolls skywards, clambering up the sides of a gravity-defying mountain of manflesh, the orchestration soars, lifting you higher. You spin, you leap, you gather momentum to fling yourself to the very peak of the Babel-esque tower you’ve created, tumbling in balletic cartwheels through the air. And then your fingers fail, a split-second of crossed neurons, and you plummet earthwards in a tangle of limbs.

Where Mount Your Friends truly excels is in the tension between competition and cooperation. Each time your friends glue themselves to the top of the ever-growing tower, it only makes it harder for you to do the same. Yet you’re all building something together, all striving to reach as high as you collectively can. Everyone wants to win, but it’s hard to want anyone to lose.

Once the weaker players have fallen by the wayside and only the fastest, most dextrous climbers remain, you all cheer the survivors on as they clamber to new heights. Gasping at dramatic fingertip grabs onto awkwardly-arranged appendages. Waiting for that inevitable slip. Against the absurdity of the nearly-naked climbers and their overacted grunts and groans, the music seems to understand: ridiculous as it may be, this is collaboration, creation, working together to reach a new pinnacle. Only then can you arrange yourself suggestively atop it.

Rob Haines is a writer, podcaster and ex-turtle biologist. His work’s appeared in Unwinnable Weekly, Kill Screen & Eurogamer, and his short fiction was featured in the BFS Award-shortlisted science fiction anthology Tales of Eve. You can find him on Twitter or check out his writing at Generation Minus One.