2015: The Year of Metroidvania

When you look at ancient Greek Red and Black Figure pottery, it is hard to believe that these amphorae and kraters are thousands of years old. They are vibrant in the truest sense of the word – full of life – more so than so much other art, the modern era included. The contrast between orange and black, coupled with the elegant line work and intricate designs creates imagery so energetic it practically dances across the face of the clay.

The joy of Apotheon is to see those heroes and gods finally break free of their static existence. Forget the God of War pastiche, play the game to witness the clouds drift and waves crash. Play Apotheon to see something mind-bogglingly old be reborn as something new, in a way only videogames could provide.

Stu Horvath is the editor in chief of Unwinnable. He reads a lot, drinks whiskey, and spends his free time calling up demons. Follow him on Twitter @StuHorvath. 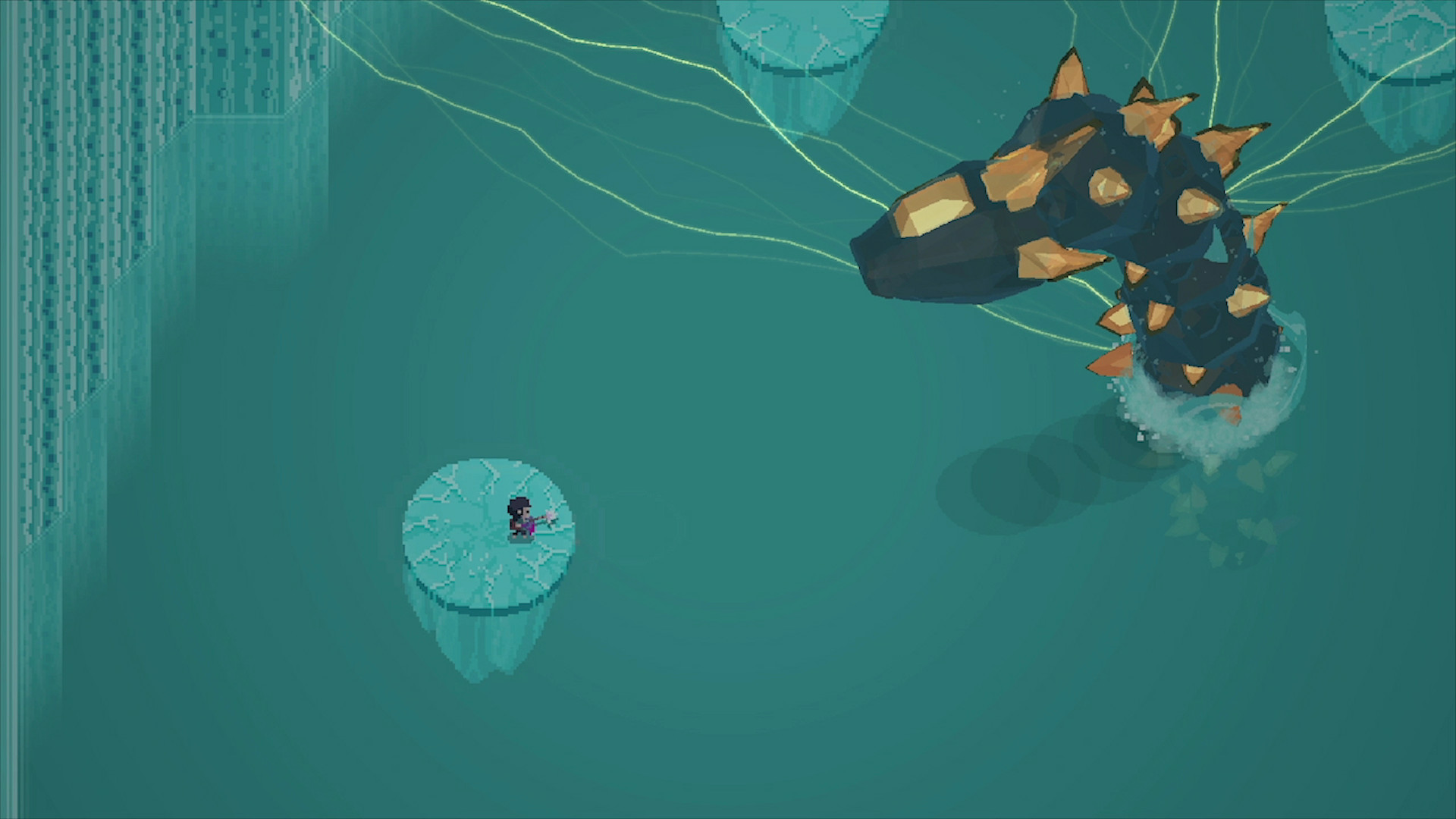 In Titan Souls a nameless warrior ventures into a desolate land filled with terrible monsters. They hunt these creatures with a powerful weapon, for an unknown purpose. If that sounds familiar, it should. The influences of Dark Souls, Shadow of the Colossus and The Legend of Zelda are impossible to ignore, but Titan Souls feels more like a product of reverence than cheap mimicry.

The stars of the game are the world and the titular Titans that inhabit it. The battles you engage them in make up almost the entirety of the text of the game. Each Titan is a unique challenge, lovingly crafted and gorgeously rendered in a clean pixel aesthetic, with a beautiful and haunting soundscape to match.

The gameplay is nearly as austere as the narrative. There are no superfluous flourishes or filler, no gated skills or upgrades beyond the mastery you develop over the mechanics you are given in the first moments. The power you accumulate as you progress is entirely within yourself, provided you possess the patience to cultivate it. The only weapon you have is a bow and a single arrow you must recover after firing, either by touching it or by pulling it back through some unexplained telekinesis. Your entire toolkit consists of this plus a dodge roll, yet each new encounter feels fresh and interesting.

Despite the lean mechanics and the minimalistic story, there is a breadth of ingenuity within creative constraints which elevates Titan Souls beyond being an homage to past titles to being one of the best games of 2015. 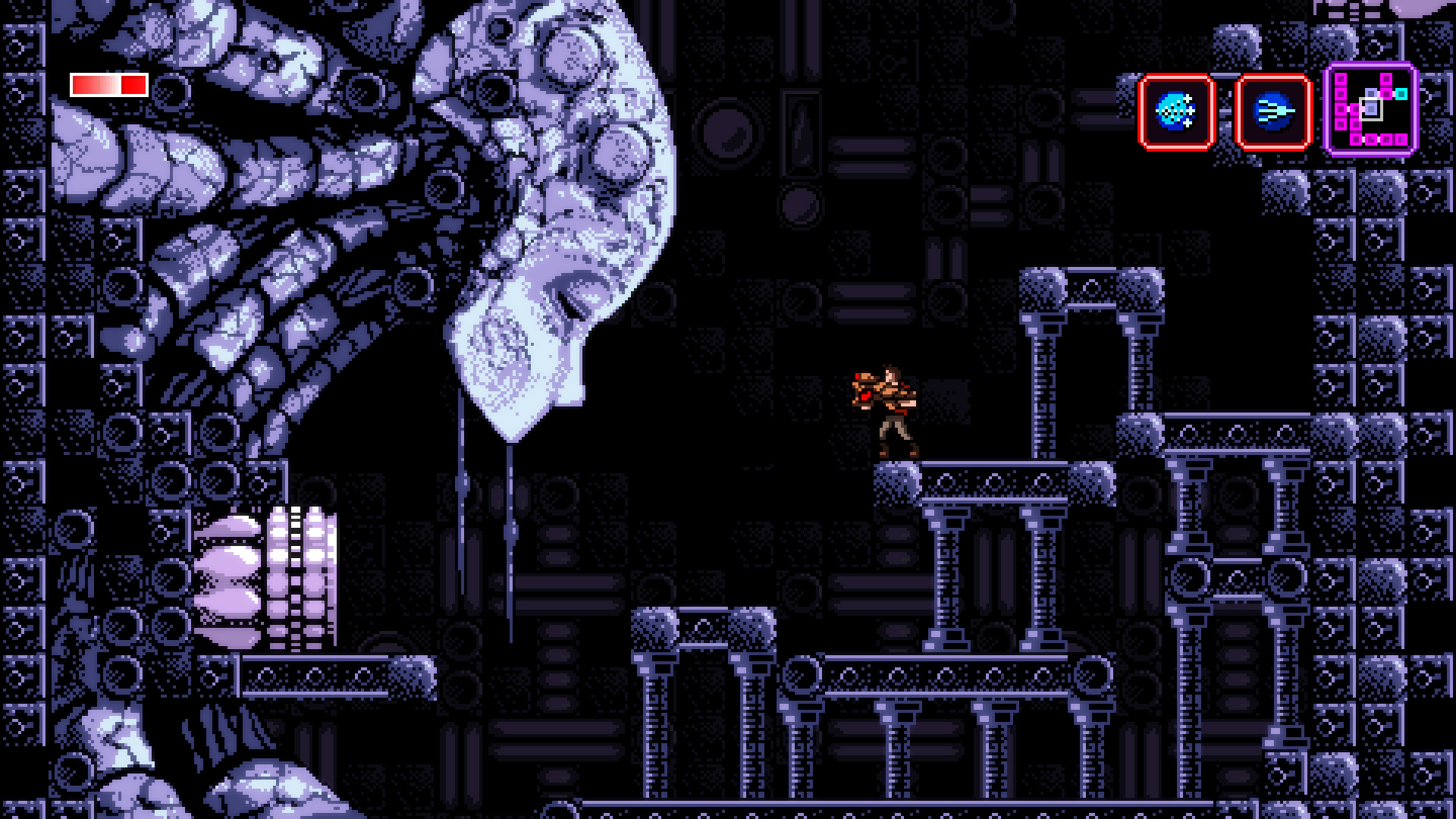 Axiom Verge is a heartbreaker of a game, because it weighs down an easy GOTY candidate – the best and most conscientiously developed Metroidvania game since Super Metroid – with a story that makes it really difficult to care. Since we’re in hagiography mode here, it’s probably best to draw a veil over a plot which compares unfavorably with Vice: Project Doom and instead focus on what makes the game good.

Thankfully, that still leaves us with a lot of ground to cover. Giger-esque design, bioweaponry, glitch mechanics, puzzles that run the gamut from trivial to thoroughly brain-breaking, secret areas, mysterious items, information doled out in tiny doses alongside a deepening sense of dread, and, of course, sturdy platforming, with so many choices of weaponry that each new room can become an exercise in real-time strategy as much as twitch mechanics.

It’s a pity that it all doesn’t amount to much, thematically speaking, particularly since the game behaves as if it has something important to say, leaving the player with a distinct “is that it?” feeling at the end of it all. It’s one of the pitfalls of retro design: there are plenty of worthwhile things about the games of the 90s to bring back, but maybe their storytelling isn’t one of them. Sometimes you just have to hang up your trenchcoat and move on. 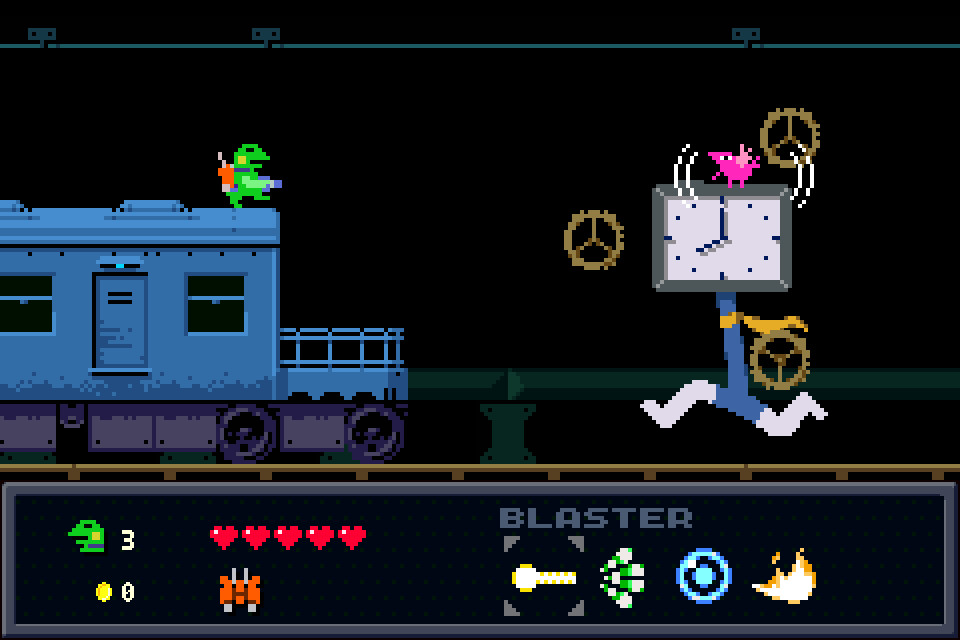 Kero Blaster is what you get if you take Cave Story and rip out all the open world parts. That sounds quite awful, and Kero Blaster is indeed not the masterpiece that Cave Story certainly was, but the remaining gameplay and the stupidly funny story make up for the lack of depth in about anything else. Also, you play as a frog with a gun, and you can wear jackets.

While Kero Blaster is not the longest experience and the harder modes only increase the enemies’ damage and change the color palette, it is a perfect fit for score hunters and achievement addicts. What Cave Story did with its secret dungeon and its score attack mode, Kero Blaster does with its difficulty settings. Beating the game on hard without ever dying and getting the ingame achievement of Mr. Froggy in a nice winter jacket feels great. And it’s not frustrating to do at all. That is mainly because the controls are so damn good all the time. It’s just the perfect Japanese Arcade experience, if that is even remotely your thing. 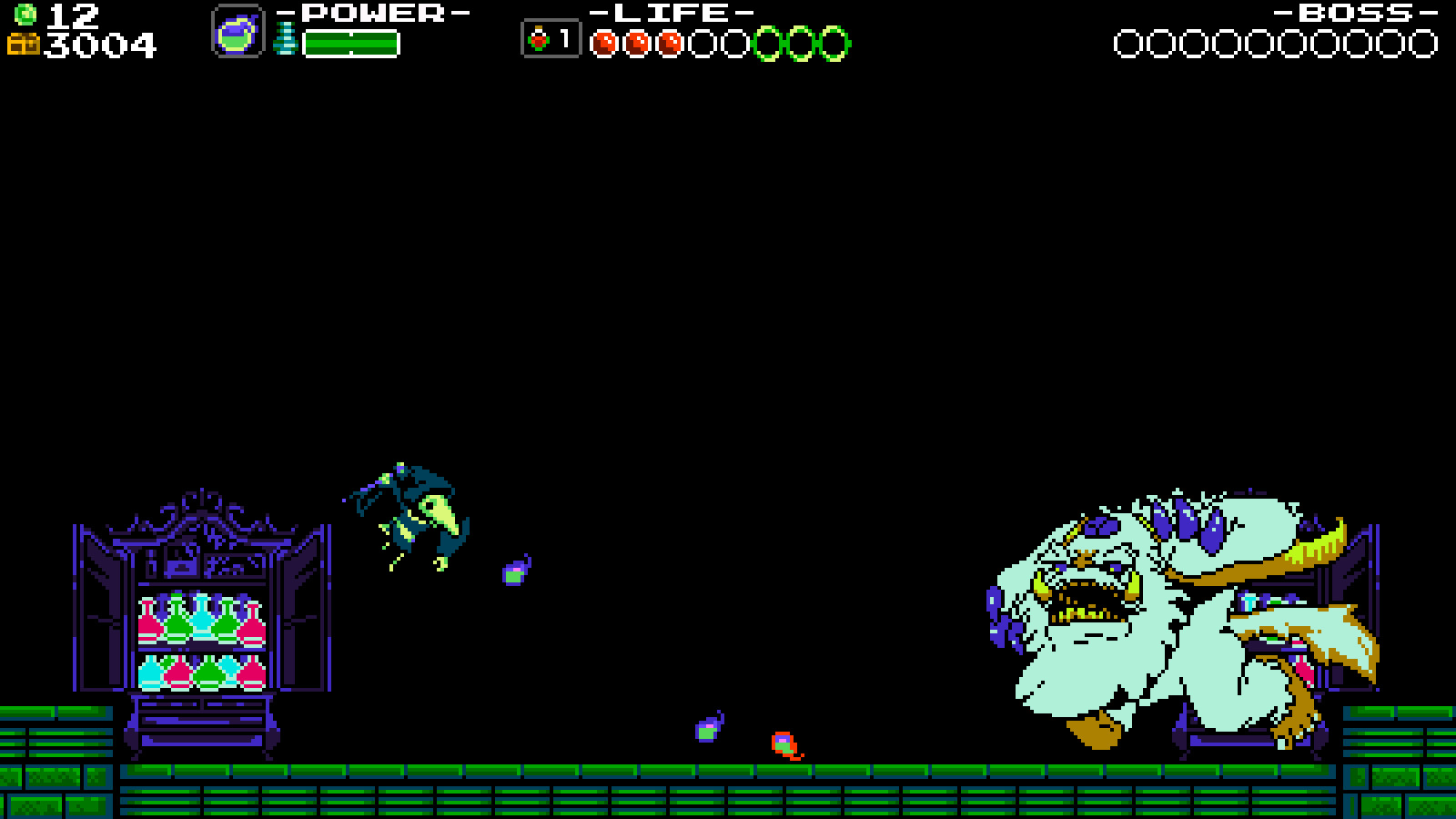 Yacht Club Games delivered a smash hit with the original Shovel Knight campaign, and knocked it out of the park a second time with Plague of Shadows. Instead of taking up the shovel a second time, the lead role this time goes to Plague Knight, the bomb-flinging boss from the original storyline’s second act.

The change in player character results in massive differences in how the game is played: much like his boss battle in the original Shovel Knight, Plague Knight fights from a distance, throwing bombs of varying shapes, sizes, and explosive properties. Depending on your choice of casing, powder, and fuse, you can use any number of different versions of his trademark weapon. Sparking vials lobbed in a high arc, cluster bombs that deal massive damage to slow-moving targets, or flasks that build up the size of an explosion as more are thrown into it.

Plague Knight revisits the levels used in the original Shovel Knight storyline, but does so with a twist: he’s not as fast or acrobatic as the ‘blue burrower’, but makes up for it with his own style of getting around. It takes a while to get used to the new movement techniques, and much like the original game, there’s no handholding in either movement or combat: you learn through trial and error, but you aren’t punished too heavily by it.

The story of Plague of Shadows is just as engaging as the new playing style: much like the original story, the plucky alchemist is working his way through besting his fellow knights in combat, resulting in a confrontation with their leader, the Enchantress. As the story unfolds we see different sides to Plague Knight’s character, something for which Yacht Club’s writers are to be commended.

With the unique bomb combinations, movement techniques and secret areas, plus a well-written story and new music to go with it, Plague of Shadows feels less like an expansion of Shovel Knight and more like a new game in the same setting.

WriterRaven is a New Zealander, and normally a writer of fiction. He’s working on a novel that uses the basic structure of videogame stories to help with the plot. But mostly you can find him procrastinating on Twitter.