Allison Winters is a master of drunken shinesparking.

I’d like to open up with a question: have you played a Metroid game that has been released since 1994? If the answer is yes, then congratulations you’ve already played Xeodrifter, and a better version at that. If, on the other hand, the answer is no, then go do that right now. Seriously, go. I’ll still be here when you get back. Xeodrifter is the kind of retro game that forgoes trying to accomplish success on its own merits, and instead just copies the graphical look of its foremothers. Maybe, the developers hoped the gaming community would be too busy drooling over the 8-bit graphics to notice the bare bones plot, poor level design, and general laziness with which the game was made.

The game’s story is as such: your character is a terrible space pilot and damages his warp core. You join him on his quest to find a new one. Now, that is a story. I mean, it’s right up there with Final Fantasy VI and Bioshock in terms of video game storytelling. Ten years from now we’ll all be talking about how the nameless guy in a red jump suit fought the fifth bug boss in a row and claimed his prize in that one game. In all seriousness, there is nothing wrong with minimalistic storytelling; books like Negative Happy Chainsaw Edge have a simple set up, but supplement it with loads of symbolism and have something to say. The plot of Xeodrifter, however, has nothing to say. 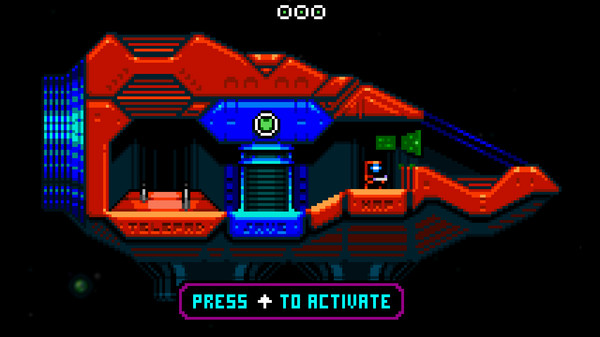 Without anything interesting to motivate me to explore and find all the health and gun upgrades, I’m collecting  for the sake of collecting. To be fair, this can be a problem for Metroid too; It’s a series of go here to get this to get this etc. Metroid games, however, try to make you forget that fact with interesting events and a larger goal than being a ship repairman. Maybe I’m just not one for exploring for the sake of exploring, but when the prize is more useless junk for a pointless gun upgrade system, it’s hard to be inspired to care.

As for the upgrades themselves, most are hidden in plain sight, but require a specific power up to reach. The need for the power up doesn’t make them any less tedious to collect, but at least it’s better than the upgrades that are hidden within invisible walls. While Metroid games are no stranger to hiding collectables in false walls and secret rooms, Metroid games also give you hints and methods to discover secrets. In Xeodrifter, a false wall can be shot through, but it’s difficult to determine whether the bullet is actually going through the wall or just disintegrating against it.

Without a compelling plot or game premise, you’d hope for the game’s system and mechanics or its design to compensate. And to that end, the gameplay sort of works and the run and gun gameplay can be fun. You shoot things and they can be expected to die at some point. That said, the graphic and enemy design are at near lawsuit level reminiscence to the original Metroid (which in terms of Metroid games to copy was probably also not the best choice given Zero Mission and Fusion have aged better). Despite its heavy similarity to Metroid, it still managed to miss what made Metroid an okay game: atmosphere. 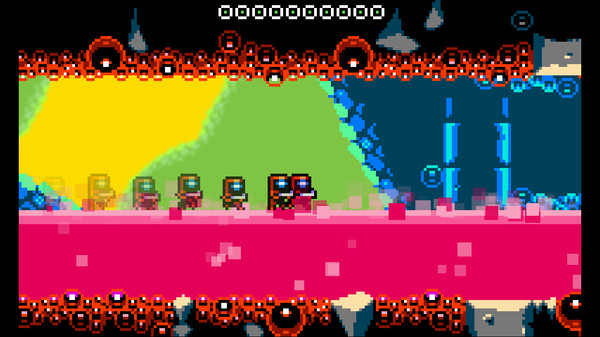 At no point was I drawn into this world of destroyed labs and underwater ruins. The music was meant to be rather sparse, yet still adds nothing to the worlds I was exploring. The worlds were just video game locales I had to trudge through because that’s where my next power up was. Additionally, in general the power ups I have to trudge around for are lackluster and reminiscent of what Samus might have left twelve of just lying around. One exception is the Phase Shift power up which allows you to go between the foreground and background. Even this cool idea becomes contrived, however, as the game uses it mostly to go behind weird wire fences that are impassible solely because of the 2-D plane.

The enemy design is also more than a little reminiscent of Metroid’s enemies. It’s basically re-colored Metroid enemies with slightly different movement patterns and terrible placement. Most above-water enemies are placed in a way that turns every battle into a one-sided deathmatch in which odds are hardly in your favor. On the other hand, once you get the submarine and can go nautical, the odds are forever in your favor provided you can dodge bullets that move at a snails pace. The shift from highly unfavorable to highly favorable odds makes the game feel as if it has been designed by a bunch of Metroid rom hackers who had a month’s worth of game design experience between them. To further drive home this assessment, you need not look further than the game’s bosses. 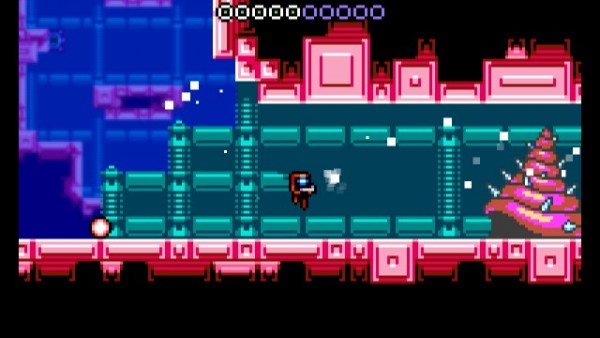 Using the term “bosses” might actually be too generous considering it’s more like one boss over and over again that has been recolored and given some new attacks. It’s like the designers were trying to see how many times we’d put up with the same boss before we became tired and turned off the game. Their guess was seven, while my personal number was about three. While in some cases recurring bosses can be awesome and add a sense of tension and progression to a game, with Xeodrifter it feels more like there was only enough in the budget for one boss sprite, so that’s all you get. To be fair, the bosses do start out with a reasonable level of difficulty, but once you acquire the Phase Shift it goes downhill quickly. At that point, the bosses rely on attacks that are: A) Incredibly hard to dodge for all the wrong reasons and B) tend to go on for way too long. Even once I started stepping to their rhythm, the attacks were still tedious and I found myself jumping into them to shorten the attack cycle just so I could go back to shooting the boss.

While I’ve been fairly critical of the game so far, I’ll admit the game plays well and that while the powers ups feel rather contrived in their use, they are used for a few decent challenges here and there. That being said, the game is incredibly lazy and fails to realize what made Metroid games, and other games of similar style, so popular: interesting worlds to explore, a good atmosphere and a decent reason to explore. Instead, Xeodrifter gives us four tiny planets that are tedious to explore and filled with the same boss over and over again. It gives us poor enemy placement, and a plot that ends before it even has a chance to begin.While I’m not saying that all Metroid games are perfect, what they do well tends to outweigh their flaws. We shouldn’t have to put up with something this lazy just to get our fix for exploring. If you haven’t played Metroid: Zero Mission yet for some reason then go do that instead. If you have then go play it again. You’re time would be better spent on it than on Xeodrifter.