The most factually accurate gift-shopping guide.

I first started writing this at Thanksgiving when I didn’t get the games I wanted, but now that it’s heading towards Christmas, I can finally finish it off so that some people know what to buy me.

I’m sure we’ve all had the problem of parents buying us games that we thought were stupid, as well as the problem of them not recognizing which games are awesome. Don’t you wish there was a way to make adults learn? You do? Well then this column is here just for you! You can hand this to your parents, or the people who buy you presents just to shut you up and say: “sKanDLe gave me this to make sure you won’t buy me half-assed vomit like you did last year.”

Now originally this was just about whether games are worth buying, but then I thought: Hey, what would happen if we could teach adults to use Steam Sales as well? That means even more presents! So this is only part one of a two part series on the economics of game buying: How to Tell if Games are Awesome.

FACT: Time spent on games is time spent in games.

There’s lots of games out there that boast loads of hours of gameplay, but that’s bromley. Do you really want to finish a game in one marathon weekend playthrough? Then what are you going to do on New Year’s Eve before the bars are open? Take a crap game like The Vanishing of Ethan Carter: I can finish that in 4 hours. Where’s the challenge in that? That’s a “You need to be more in touch with your feelings” walking simulator. Boooooring! What you really need to buy is a game like Destiny, which extends playtime by giving all bosses thousands of hitpoints. That’s a damn challenge.

FACT: You can tell a lot about a game by which other game it looks like.

Lots of games are going for this 8-bit pixel look because it looks really retro. Retro is for adults who grew up before they invented cell-shading. If I wanted a game where the characters look like blocks, I’d boot up Minecraft. Oh wait, I already have Minecraft, as does everyone else on the planet. Steve says he saw Barack Obama on his Minecraft server the other day, and he was dead impressed with Steve’s obsidian penis sculpture.

What I’d suggest adults go for is a game that has well-known graphic artists working on it, like another game that almost everyone on the planet has by now. Like, say, Destiny. 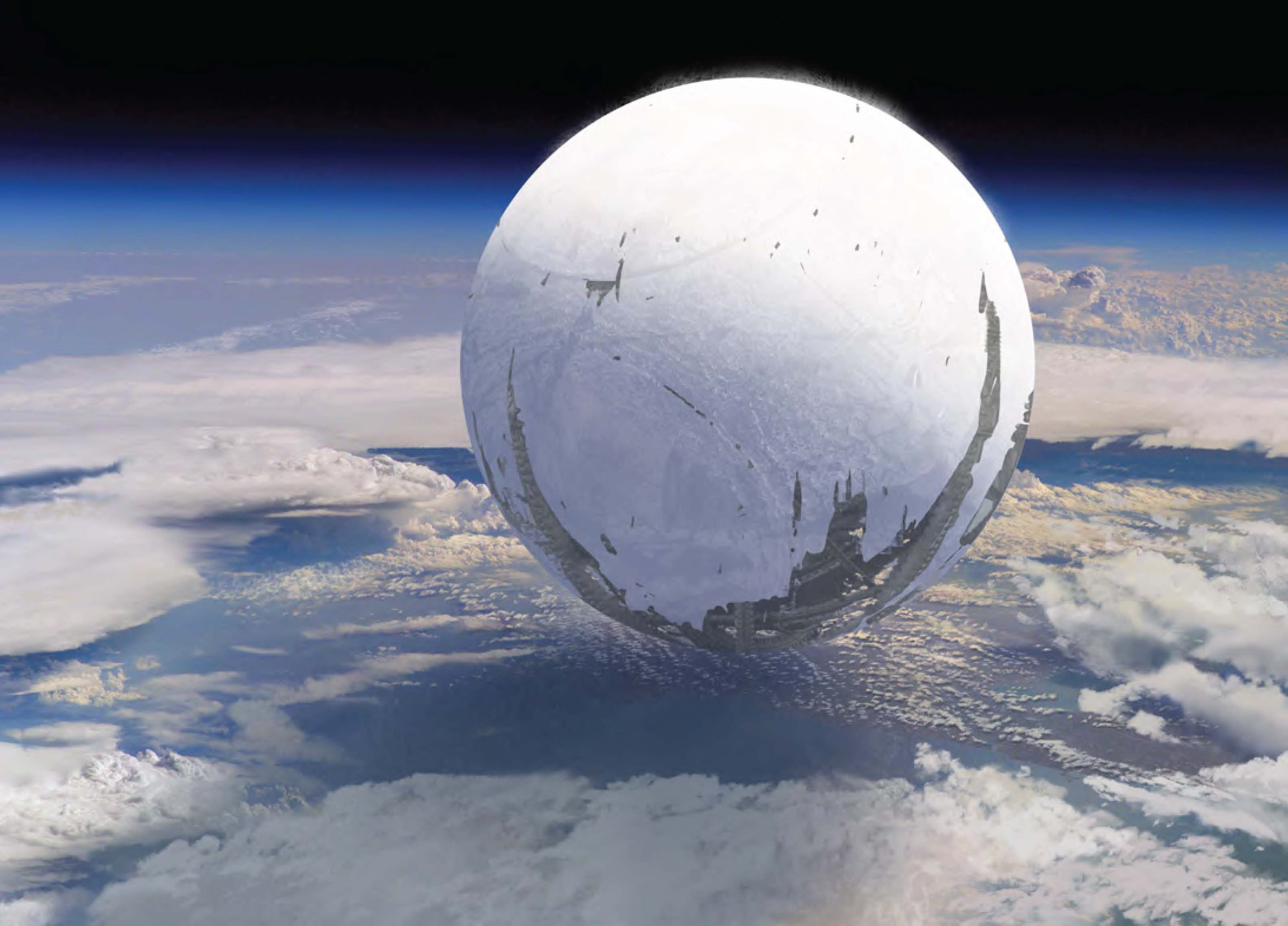 FACT: You can play game music on any instrument.

Some games use a full symphonic orchestra to record their soundtracks. Everquest II, for instance, used Laura Karpman conducting the FILMharmonic Orchestra Prague. That’s how important game music can be. We’re talking Emmy award winners doing video game music! And then you have the music to a game like Town of Salem, which was arranged on the bagpipes for the cowbell. I mean, it’s a game about the Mafia, witches, and pyros, and then they go and put awful music in it.

What you really want is a game like Destiny, which has one of the Beatles in it. Your parents might remember them from yesterday, when all their presents were far away. Then maybe you can talk about The Beatles and, like, bond or something. Parents like bonding.

When you look for a voice to provide comfort and support, you may think of the wonderful, multi-talented, fantastically gifted Jennifer Hale, or of an industry veteran like Peter Dinklage. You don’t want some underpaid technician trying to do a bad accent and failing as hilariously as Crash Time 2. So, if you want Game of Thrones-quality voice acting, perhaps buying Destiny might be a good idea?

FACT: “The harder the conflict, the more glorious the triumph” – Thomas Paine

You want to play a glorious game, don’t you? You’re already hearing the screams, so don’t you want to see the blood splatter? Of course you do! So why in heck’s name would you get a game like Ship Simulator Extremes? Games are about achieving goals through body counts, and even if you’re in a bloodless game like Destiny, you need some conflict, don’t you?

That’s where violence comes from: conflict. What do ships do? They sail. That’s it. Even if you crash them into each other, they just sink. They don’t even explode. Not like the ships in Destiny.

FACT: Grindr is not an App for World of Warcraft.

Grinding is a necessary part of games; you can’t just be given all the cool stuff at once. That’s why I go through my Cheevos so I know what I have to get. Grinding is repetition, doing the same thing over and over again to get more stuff. Some people might feel different, but that’s what I want my games to be about. Once I’ve mastered the headshot, I want to do it again and again and again.

Of course, some games take this too far. Some games go the Police Academy route and take grinding to a new level of awful. Elf Bowling: Hawaiian Vacation not good enough? How about Elf Bowling 7 1/7: The Last Insult? No, imagine that your present buyer looks at all the Elf Bowling games she bought you and decides to get you Elf Bowling the Movie: The Great North Pole Elf Strike.

Here’s a short tip: A game like Destiny has all the grinding you’ll ever need. It’s a game built around grinding for phat lewt (*shudder* -ed.). You can’t go wrong with a game like that. 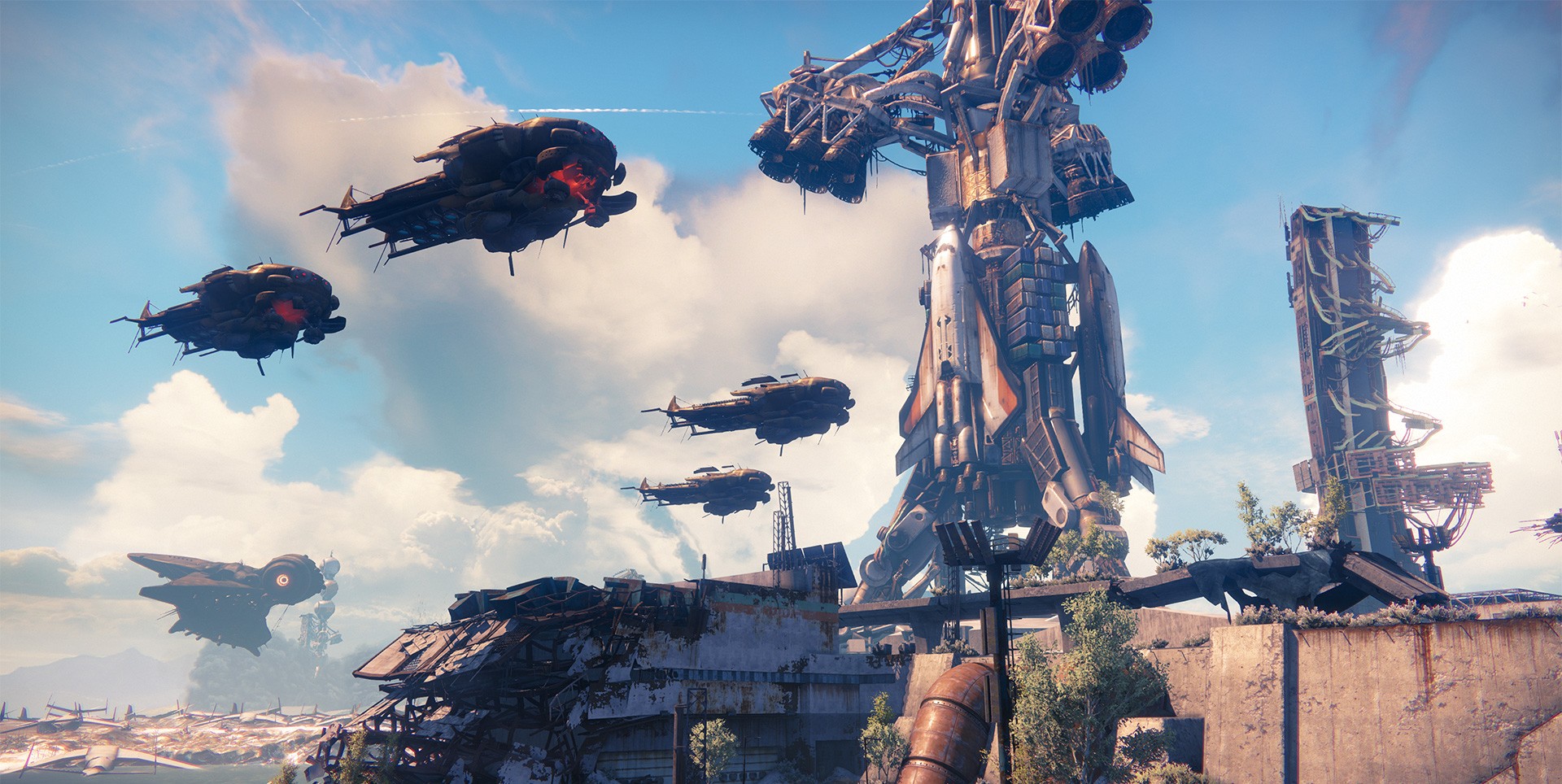 Sonic has always been rubbish. These silly hipsters who talk about a blue hedgehog that made one decent game, yet have no love for Conker. Worthless. Not the worst DLC though. Nope, not Oblivion Horse Armour, or EVE Monocles.

Let me spare you walking through this Choose your Own Fanfiction by telling you how bad DA:O is. You remember when you were shown awful game titles like The Blizzard of Pyretop Mountain? Imagine someone writing that while adding “Aren’t you great? You’re so awesome!” all over the place.

Now imagine that you find a page that you haven’t seen before. Lots of writing about a big quest, how they really need someone super manly to do it, and you say “Yeah, sure!” And it says, “Insert seven bucks to continue!” No. How about I don’t and you (there were some rather harsh, misspelled words here).

What you really want is a game that promises you things right away with its DLC. Like The Dark Below for Destiny. For only 20 bucks, you get the right to catch up with all the people who bought Destiny at Thanksgiving.

There’s a psychological technique called imprinting, which means you act like you’ve always acted. That means it’s really tough to change away from things you like. That’s why “games” like Secret of the Magic Crystals, which is about breeding ponies, are not the sort of game to buy your son! Because he doesn’t like ponies, and he’s never going to like ponies, and…

OK, it’s not really a bad game, and I have played it a little, but it’s not about ducks, is it?

No. If you’re looking for a game about ducks, you should get a game like Destiny, shouldn’t you? Because it’s about imprinting. And ducks.

ANYWAY, if we enter all the games into the FACT TABLE, we can score them out of 10. 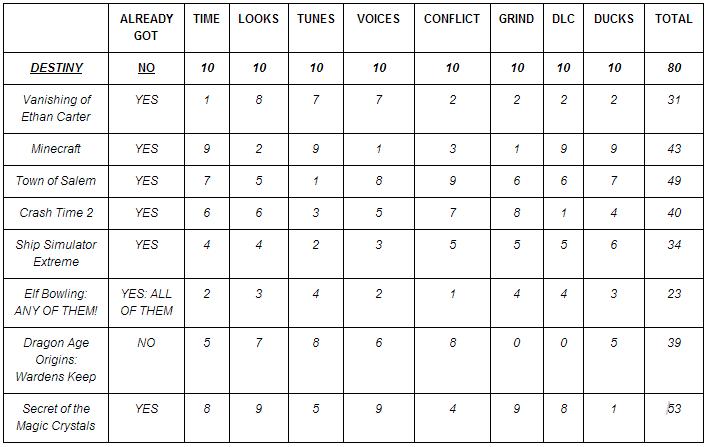 We can see there’s an obvious winner already.

But  sKanDLe, perhaps my parents are greedy and cruel and heartless and don’t want to spend too much money on me? Hold onto that table, because there’s another table coming in the next column. And you know what two tables means? Math.

And what is MATH? FACTS with NUMBERS!

Keep ’em safe until after Xmas, and if your parents don’t buy you what you deserve, then hit them with my next column. Which will be just in time for the January sales.

Tags: Destiny
← Off The Grid: Persona Q: Shadow of the Labyrinth
Art Tickles: Caught Between Worlds →