Off The Grid: Persona Q: Shadow of the Labyrinth

Allison Winters should stop standing in the shadows.

Stepping back into the shoes of that blue haired mute was akin to coming home. Running through the eerie dungeons with familiar friends — friends with traumatic pasts and even harsher futures — and killing shadows was comforting. But, as with coming home after a long absence, even familiar elements can seem new. The gameplay, tone, and style in Persona Q all blend to create an experience that is both new and familiar for Persona fans.

The gameplay borrows heavily from Atlus’ own Etrian Odyssey series while adding some Persona elements to give the game its own signature feel. From Etrian Odyssey, we get the first-person dungeon crawling, random encounters, F.O.Es, and hand drawn maps.  The mapping is not only tedious at first when you are mostly just tracing blue lines, but even when the floors do become more expansive and contain more obstacles, the map making remains tedious. That said, completing my own homemade map gave me a weird sense of satisfaction once it was complete.  It’s also worth noting that the auto mapping feature did alleviate some the tedium without ruining my sense of smug satisfaction.

The combat system of the game is Persona through and through. The only difference is they ditched the “One More Time” mechanic from previous Persona titles in favor of “Boosting.” Hitting an enemy with its weakness or landing a critical hit gives you a boost that allows you to go first in the next turn and reduces skill costs to zero, provided you don’t get hit before the next turn begins. It’s similar to a tactic used by most modern SMT games, though in those games, not hitting the weakness usually results in your immediate death. Instead, in Persona Q, it just eats up your miniscule bank of spell points, weakening you in the long run. 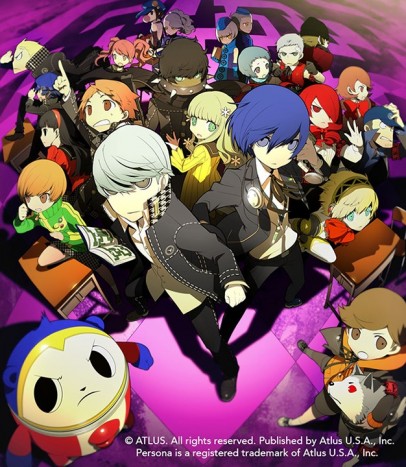 The other big shake up to gameplay is that, while in Persona 3 and 4 players were limited to the main character, Persona Q goes back to the play style of Persona 1 and 2 where players could can equip a different persona due to the two main protagonists meeting up. They keep their initial persona and draw their stats, as well as a small move pool, from the initial persona but with the addition of a sub-persona that gives an expanded move set. This means you can load up a persona with spells, but it won’t make Shinjiro’s abysmal magic stat any better. This allows any combination of party to be viable without making characters interchangeable. The sub-persona also grants a small bit of health and spell points that refill every battle, but which are unavailable outside of battle. Nonetheless, this small bit of health and spell points eases frustrations in battle since you can always cast at least one spell to hopefully turn the tide of battle.

Don’t think that these changes makes the game any easier; it’s still a Persona game. Healing is not cheap and the cost increases every time you visit the nurse’s office. Furthermore, money can only be earned by selling the items monsters drop, so managing what little money you have is important. Additionally, While boost mode and the extra mana from sub-personsa may seem like heavy perks, it is easy to be knocked out of the boost and the extra mana from the sub-persona is small. This Persona game also keeps some of the more random  and challenging elements of battle from previous games. For instance, first strikes are still part of gameplay, and still lead to an easy death. When you do die, you get sent back to the last save point, but you get to keep all your map data. In short, every battle requires planning so you don’t get your butt handed to you.

On the narrative side of affairs, everything works, The End. Okay…I’ll actually explain. The story itself has a fan fiction vibe to it. Some events that occur clash heavily with events from past games. For example, In Persona Q, the characters visit the mysterious Velvet Room before the moment in the timeline  of Persona 3 when they visit it.  This makes the visit to the Velvet Room in Persona Q incongruent to the experience of the characters in Persona 3, who upon visiting the room, have no idea what the Velvet room or it’s residents are. Despite the niggling doubt that the cast is not going to remember anything ,the story still has emotional weight and I’m definitely invested in it. This may, however, be due to my deep attachment to the cast and my desire to see them escape their odd locale. For reference,The game allows you to experiencing it from either the Persona 3 or Persona 4 cast’s perspective, and while I elected to play the Persona 3 side, this doesn’t change the story too drastically.

The story also drops references by the bucketful to events from previous games, and even includes a rather weird cameo from Catherine’s protagonist Vincent. The callbacks extend to the game’s shadow enemies, all of them being from either game except the bosses. While this could be interpreted as laziness on the behalf of the developers, these references fit this game’s theme of deliberate actions. The game is pushing the belief that everything happens for a reason and that it is all part of the journey. The world feels purposefully set up for the cast to explore. 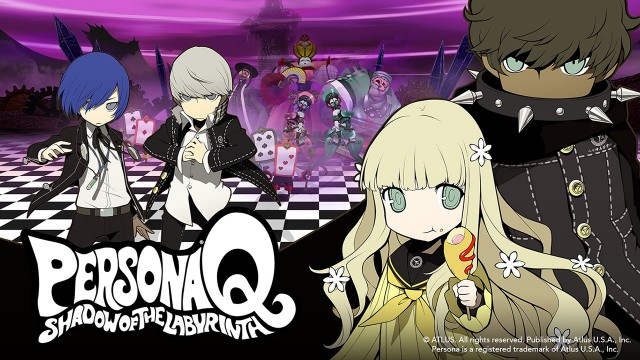 Unlike Persona 4 Arena, where the Persona 3 cast was more experienced and viewed the Persona 4  cast as rookies, here both casts have been ripped mid-story from their original games and are given more equal footing. The more serious nature of the SEES team of Persona 3 contrasts nicely with the looser Investigation Team of Persona 4 and leads to some funny scenes between the two teams. Persona 4’s lighthearted tone does slightly overtake the whole production, though. The color scheme in Persona Q is predominantly yellow ( Persona 4’s main motif) with just a little blue (Perona 3’s main color) tossed in too. The game does try to keep the more serious undertones in play, but does so mostly through the SEES team, an overall somber group.

While some characters go through a bit of flanderization, it’s not too bad. Akihito’s protein junkie personality from Arena is worked in, but his interactions with Shinjiro manage to balance it out and make it seem a little more natural. Speaking of their interactions, their conversations, while presented as comedic, still carry that bitter undertone that was present in Persona 3, but are better highlighted here. All the flaws of each team are presented jokingly, but considering what’s in store for the SEES team, it puts everything in a darker light.

The style of the game itself is predominantly more like Persona 4, with its more blatant dungeon themes and the love of the color yellow. However, Persona 3‘s design works its way in quietly. The dungeon design, while being more overtly themed, felt like a floor of Tartarus as opposed to the TV world with the creepier atmosphere and spartan lay out.

Everything in this game mixes and melds to make a new experience that feels fresh yet familiar. Seeing these characters again is comforting in a way. Even with all the changes, it felt like I was stepping right back into the night to guide two teams I knew so well. This maze of life may be crazy, but it’s well worth the time to explore it.

Tags: Persona Q
← Art Tickles: What Are You Doing?
Same Difference: The Economics of Game Buying (1/2) →