Sorry this is a bit late this week, but I’ve been playing the adverts for Age of War: Fire Age on repeat. It’s a garbage Clash of Clans clone, but dammit, Kate Upton rocks my tablet.

Where was I? Oh yeah…

Ever notice how you’re the plucky soldier going in against overwhelming odds in EVERY GAME? And yet when you’re playing against other people, they force you to have FAIR SIDES?

Does that sound like BS? Yeah – but what are you gonna do? Have an AI that thinks as smart as sKanDLe? Not gonna happen.

So, the computer cheats. It’s nothing new – even in Donkey Kong, you’ve got three different critters coming for you – but is there a good cheat and a bad cheat? Are the cheats the same or are they different? Sounds like we need a

FACT: Horde comes from the Turkish language to describe Mongols.

From the very beginning, there was a horde of enemies moving left, down one, and moving right. After a while, they started diving or chasing; but they were still all dumb as PJs. This is the easiest way of cheating – simply overwhelming the player with sheer numbers. And you can see why – there’s something really satisfying about mowing down a horde. Even before killstreaks, there was something really cool about lobbing a grenade in a building and getting multi-kills. Most of the war films always have a defense tower that gets nuked by Arnie or Sly, just before the Wilhelm Scream.

Thing is – it’s dull if they’re stupid. Even if you enjoy headshots (and I do), it’s no fun if it’s some pod-brain cousin of yours that has never held a controller. You want to feel as if you’ve outsmarted them, and that doesn’t work  if they get outsmarted by juice boxes.

FACT: Getting shot in the head doesn’t hurt – because you’re already dead before you can feel it.

Now, if you’ve got a limit on how many enemies you’ve got, you have to bring in the big guns without bringing in the BIG guns. That means the computer gets to shoot at your level – but it never does. See, even if I’m in Camp City Central, I’m not as fast as a computer pressing a button. They can do it before I press, because they aren’t pressing anything. They’re just sending a signal.

And each one of mine tears their head off – so guess what it does to me.

You got it, he ded. And they’ve got a LOS that’s not based on being banned from using the Plasma Screen because of the language they used in front of Grandma.

Now, this means that you can be challenged by the same number of enemies – but you have to ambush them. And they don’t ambush well. Even if you’re sneaking up on them, they have a radar sense that spots you even when you know you’re hidden and BANG.

FACT: “Controlling the environment is half the battle” – Sun Tzu, Fire Age: Art of War. 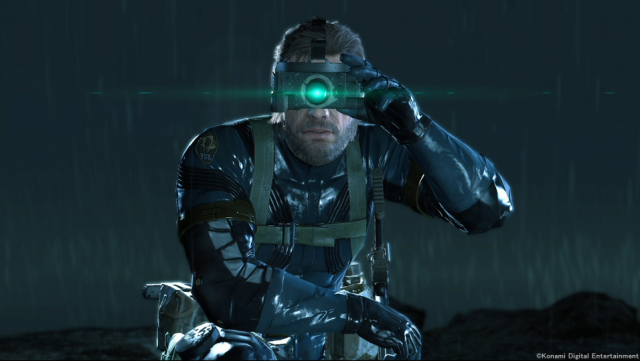 It’d be a much better book if Kate was doing the adverts for it; but it still speaks some truth from the past. If you’re on a stealth mission, and you suddenly see a “!”, you know that you’re in a world of hurt.

Now, I know what it’s meant to be doing, because if I ever get caught sneaking out of detention, you can see Miss Ashcroft getting the “!” above her head; but this is meant to be a game!

See, if I was Solid Snake – I’d have a line ready to tell the guards I was employed by their boss to keep an eye on them, and they passed. Then they’d have to let me go.

Doesn’t work though. Not in the game. They’ve made it so as soon as you get that “!”, you’ve got to hide before they riddle you. Not because they’ve got aimbots – they don’t need to aim. They just bake your ass.

FACT: If you think the ammo limits your encumbrance, look at how many Easter eggs you’re carrying.

You know what the stupidest way of being intelligent is? Making the game about something else.

Now, I really enjoy GTA, and I like it when I can grab hold of some Tiki Statues or Pearls for boosts. But if I have to scale up the Statue of Liberty, swim to the depths of the shark infested waters and then hang-glide to the rickety fishing shack surrounded by dogs with bees in their mouths, then you can watch me return the game to Gamestop.

If I want to headshot all the Mafia before I meet up with them, let me. Don’t tell me I have to grab 14 green poodles before they’ll talk with me. Let me talk to them with my leetle friend.

FACT: No-one has yet decided which is worse: Stuns or Hostage Missions.

There are bad cheats. Anyone who uses these two are specifically acting against the 2nd Amendment  – which means they’re actually terrorists.

Any creature that has an unavoidable attack that makes you stagger around pounding your joypad to regain control – or any mission that requires you to babysit a terrapin across a minefield – is SPECIFICALLY STOPPING YOU BEARING ARMS. THAT MAKES THEM A TERRORIST. THERE IS NO ARGUMENT ON THIS.

Mario Kart 8, however, sold 1.2 million in its first four days – all keeping that damn Toad on your bumper all the way round the track, waiting for that damn blue shell.

Oh heck, I forgot the blue shell – that’s another one – I’ll come back to that.

Anyone who’s played a racing game will tell you that no matter how well you do, the computer is always just on your heels – no matter how awesome you’re driving.  On the earlier games, they just didn’t bother driving and just kept up with you irregardless.

Now, this provides you with a challenge – so you’re always racing – and you can certainly see what happens with the non-banded guys – as you can lap them because they’re having to drive properly with 7 evil mad-things in front of them, chucking poop behind them. 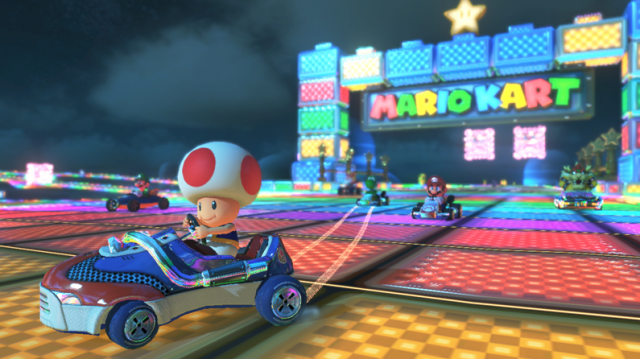 See, if you look back at any of the old shows – there was no real swearing, just things like bloody and tarnation – whatever that means. But words like Butt, Schmuck and Bromley all were allowed about 1992. I mean, back in those days, we only had red and green shells. New swears had to be invented in 1996 when Mario Kart 64 brought these new devils into play.

And what’s the worst thing about these cheats? They combine ALL of the previous cheats in one.

All the other players can fire a blue shell at you (Horde), they can’t miss (Aimbot), they only attack the first place (Environment), they disrupt rules (Easter Eggs), they knock you over (Stun), cannot be out-run (Elastic Band) and ANNOUNCE THEMSELVES.

BUT, I hear you ask, are they fair?

But, they’re not fair equally.

See, I can take out Toad with the same ease. And I can do it just before he’s about to cross the line – so unlike some of the others, it’s actually a fair cheat.

So, not all cheats are created equal – and some of them are downright evil – while they’re all the same (giving the computer a chance), they’re also all different (cripple the player). That means that we’ve reached the pinnacle of cheats, haven’t we?

See, it doesn’t matter how you play it – all of the “fairness” comes from being unfair in different ways, so it’s not the best it could be, and how do we fix that?

FACT: There’s no-one quite as evil as your best friend.

Take my friend Steve, for example, he picks on me continually – which makes the times where I kick his ass so much sweeter: but what if I had an AI Steve?

See, if I’m playing as Steve, I know exactly what I’m gonna be doing. I’m gonna be running for the sniper rifle and getting to the place I know that I can snipe the most people from. And that’s what you teach one of the bots. Probably to wave everytime you get a kill as well.

Now, if you grab 20 people at a e-sports game, you can program their skills into the bots and make them FAIR without cheating.

And if you think that’s a crazy thought, try thinking of Pacman. That was 35 years ago, and each of them ghosts had more personality than Toad or Princess Deedpoll.

Red was the Spy, Pink and Blue were Pyros and Orange was the Sniper; and between those four lines of personality code, they still keep you in check.

The best way to cheat is to follow all those that cheat for a living – and there’s a lot of them already playing.

TL:DR; A good cheat makes a game – a bad cheat ends up in the bargain bin.

← Off The Grid: Elliott Quest
Due Diligence: Far Cry 4 Doesn’t Scare Me Any More →