Off The Grid: Elliott Quest

Elliot Quest, is a game remarkably similar to Adventure of Link right down to me really wanting to throw an “S” in the title.  Adventure of Link was a departure from the first game’s top down action adventure style, instead opting to focus more on leveling up and battling on a 2-D plane. It also introduced platforming to the series. Adventure of Link may be the oddball in its own series, but the mix of those elements was rather new at the time and inspired many games after it. It seems Elliot Quest is trying to recapture the style of that game with it’s beautiful pixel art, music, and game play. However, it also goes outside simple mimicry, music notwithstanding, to deliver a game that stands well on its own.

The game and its combat system involve a nice layer of strategy by allowing you to play around with upgrade particulars. The bow and arrows Elliot acquires on his quest are the basis for the game’s combat. Dispatching enemies requires using your surroundings and figuring out just the right angle to fire off your bow. The game allows you to upgrade the different facets of your weapons and life/mana bars. This becomes important later in the game, as there are a significant number of enemies with over-powered ranged attacks. Some foes have attacks that can knock off half your health in addition to being hard to dodge. It turns the side areas in the game into exercises in annoyance and foul language. Even given this frustration, however, I wanted to explore as much as I could. 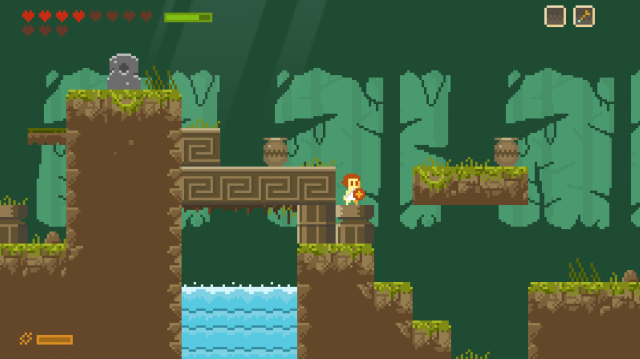 The game makes exploration easy. Navigating your way through the game is also pretty straightforward; the game is clear on where it wants you to go. That said, the world map lets you go where you please, provided you have the necessary tools to get through the various areas. The treasures you find may range from meh to good, but the puzzles therein and the act of exploring a new area are fun. The dungeons are also fairly straightforward as long as you diligently explore the area. It is worth mentioning, though, that the Wii U version of the game has a glitch that can leave you stranded in the graveyard area and unable to beat the game. I’ve been informed by the developers that there is a patch in the works to fix this problem, so it isn’t a deal breaker.

While I’m talking about potential deal breakers, there are few other flaws in the game worth mentioning. Bombs, which are used for exploration, can’t be purchased until after the second dungeon. Before that, you must acquire them from an enemy that, frustratingly, can only be killed with a bomb. In other words, it’s easy to run low on bombs. It’s even more frustrating when, after you’ve fought tooth and nail to reach an area, you’re denied access due to lack of bombs. Speaking of running low, you have to be careful with your mana. Some spells, like the rock spell, eat through mana like crazy. You may find yourself tediously collecting mana if you didn’t invest in the skill tree pertaining to your mana bar. 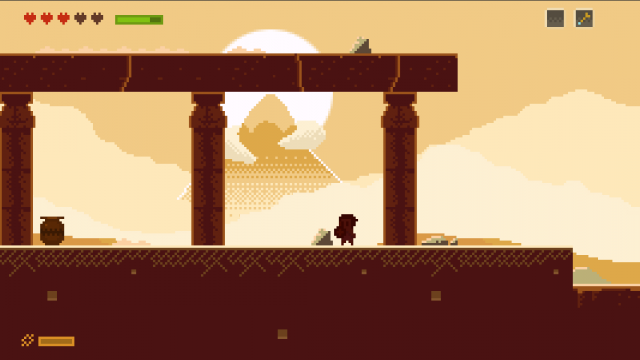 The story of Elliott is one of learning to cope and move on following the loss of a loved one. While I generally love that kind of plot, Elliott missteps by trying to communicate this personal journey against a big epic backdrop. We’re fed the bigger chunks of story after each major dungeon and the finer details through Elliot’s inner monologue and side areas. But, the story worked best in those monologue moments, letting you get into Elliot’s head and understand the personal side of the journey.

Despite a few setbacks, I haven’t had this much fun exploring a world since my last visit to Brinstar. The game looks, plays, and sounds beautiful. It may be a slightly flawed gem, but it still sparkles enough to show you how much it cares.