Within the past few years, a particularly stagey style of promotional demos for multiplayer games like The Division or Anthem has popped up, and it always leaves me cold. Feigning the casual banter and camaraderie of online voice chat with professional voice actors, these demos oversell what multiplayer communication is like, portraying an idealized experience with teammates who are easygoing even while they effortlessly play into the drama of the game. In these videos, communication is constant and immersive; even amidst stressful firefights, they’re not talking over each other, but performing a carefully rehearsed and edited script that ultimately comes off as inauthentic. In reality, the communicative experience of playing a multiplayer game is a mess. Cross-talk, bickering, and miscommunication are inevitable, and playing with strangers proves even worse with the possibility of encountering sailor-mouthed teenagers, background noise, harassment, rants, and slurs. Enter Apex Legends’s ping system, which has earned considerable praise for eliminating the need for microphones, instead encouraging players to communicate using context-sensitive voice lines and icons. Although comparisons are often made to hero shooters like Overwatch or the battle royale titan Fortnite, the experience of playing and communicating with others in Apex Legends can be linked to a more unlikely kindred spirit: Journey. In both games, players ping and chirp in ways that don’t require a microphone, yet complex messages can still emerge, drawing players closer together without ever needing the intervention of the human voice.

Critics often praise the ping system of Apex Legends for its utilitarian purposes of easing communication, which it undoubtedly deserves, but more than that, it also creates an affective bond between players that often goes unremarked in such critical conversations. Context-specific tags allow players to mark enemy locations, alert one another to valuable loot, call dibs on said loot, say thank you, suggest places to explore, etc. Pinging is essential, as the team dynamics of Apex Legends mean players depend on their squadmates for survival. Even inexperienced players can still invaluably serve the team by scouting enemy locations or directing others to crucial med kits and body shields. The ability to respond with stock phrases like “thank you” opens up room for courtesy in the game, cementing a sense of solidarity. Gita Jackson suggests that the game needs a “you’re welcome” ping, and while I agree, I’ve also been noticing and enjoying the unspoken proclamations of gratitude and elation that suggest even deeper team solidarity beyond the confines of language. When Jackson asks, “How can I show them [teammates] that I am present, paying attention, and aware that they’re speaking to me?” I can’t help but think of my own online experiences where my team expressed mutual understanding in less direct ways. 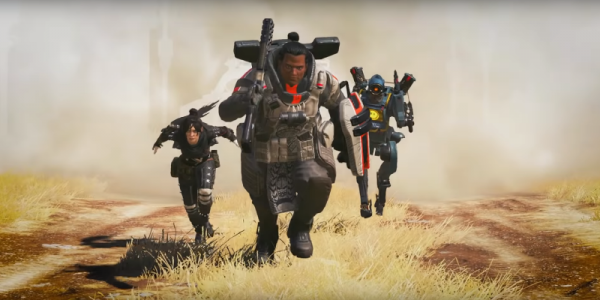 The nonverbal actions of my teammates from a recent match can show one way of expressing presence. At the start of the game, our team moved closely but separately, amassing gear and ammo individually. Just a few pings were exchanged as we looted for items, before bumping into a heated firefight in the contested marketplace area as bullets sprayed outward and players dived for cover indoors. With both my teammates downed and in need of resuscitation at a faraway respawn point, I quickly popped off the remaining enemies and retrieved the banners necessary to revive my comrades as the ever-shrinking kill ring quickly bore down upon me. All the while, I knew that the other two players, though temporarily incapacitated, were eagerly spectating my view on their own screens and likely coaxing me on to save them. When I successfully revived them, our behavior as a team quickly changed from individual exploration to tighter, more purposeful movement in unison. Thus, my teammates expressed their gratitude by simply being there as team players. In our very movements was the implicit acknowledgement that we were no longer going to split apart and go rogue, but instead move as a unit. When one player hugged the canyon walls and crouched forward slowly, we mirrored their actions as though to say, “I see you.” When one planted themselves atop a building to wait for the last two enemy squads to find us, we also settled inside the same building, though nobody pinged it or gave suggestions of what to do—we were past the ping system at that point. We communicated by watching one another and trusting that their intentions were sound, and that led us to victory. Apex Legends ultimately fosters a sense of togetherness in a multiplayer culture flooded with trolls and griefers that may render such games alienating to new players. While the game is still young and etiquette may change for the worse, I’m content now in these unspoken pings that allow us to journey together, silent yet still communicating.

Worlds away, the chirp system of Journey similarly renders the use of a microphone unnecessary in its multiplayer setting. Pilgrimaging through a world devoid of human voices and recognizable written language, players communicate with each other through musical chirps. At first glance, the non-linguistic chirps lack any clear meaning, and yet, by altering the frequency of chirps or pairing these sounds with an action, it can be made contextual and purposeful. Chirping in short, consecutive bursts can call the attention of the other player and signal something of importance; chirping in front of a doorway or while jumping towards the necessary pathways can communicate to the other player instructions to progress through the level. Responding back with a chirp, one imagines the other player saying “Thank you” in a moment of acknowledgement, as though to say, “I understood you.” The wonder of the chirp system, unlike the ping system of Apex Legends, is that it doesn’t map onto specific meanings or commands. Regardless, Journey’s communication system resembles that of Apex Legends as both forms drive disparate strangers to connect despite communicative limitations, urging players to move forward and work together. By pinging and chirping, players come to recognize the human presence generating these noises, all without ever saying a word themselves. 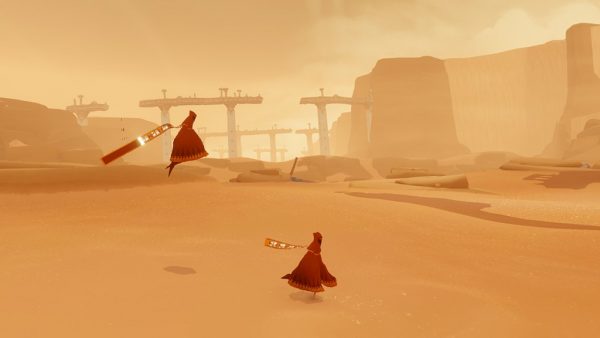 In the final act of Journey, you and your companion find yourselves caught in a devastating blizzard that slows progress to a crawl. Any attempt to communicate with your counterpart is met with a weak, defeated sigh in place of the once loud and musical chirp. Your character merely raises their head weakly in an attempt to call out, and seeing this action replicated by your partner indicates their own feeble efforts to reciprocate the gesture. “I hear you,” such a motion suggests, “We’re still in this together.” This haunting silence sharply contrasts the sequence that follows after both characters collapse and reawaken, as the game triumphantly restores the chirp as you and your partner jubilantly rush to the top of the mountain at the end of your journey. Your voice intact and louder than ever before, the chirps serve as expressions of unfiltered joy following such a harrowing sequence. Set to the swelling orchestral strings of the soundtrack’s climax, these chirps become more pronounced as part of the musical overture, rising as your character ascends in turn. Reaching the summit together after hours of play, these chirps serve as markers of human presence and shared understanding even if players never exchange a single word, and walking into the light together, it feels like unspoken solidarity not unlike moving as a unified squad in Apex Legends.

When we play online multiplayer games, we like to feel the presence of other humans and reach a certain rhythm of communication and mutual understanding together. Big studio marketing teams may imagine an idealized world of online, microphone-enabled voice chats harmoniously articulate and dramatically immersive, but limitations upon communication allow us to experience that genuine human connection in an aestheticized way, paradoxically deepening it. Pings and chirps call attention to the fact that another human being is somewhere in another part of the world pushing buttons in an attempt to reach out and communicate, suggesting their desire for acknowledgment and cooperation. These systems allow us to form different kinds of unspoken emotional bonds with strangers when the human voice is absent, forging new ways of humanizing online play. 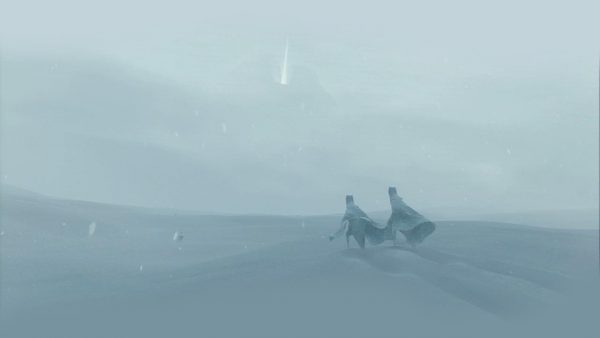 Tags: Apex Legends, Journey
← Due Diligence: Kingdom Hearts 0.20 Questions: Roads to Answers Yet to Come
Off The Grid: Away: Journey to the Unexpected →