Opened World: Who Watches the Workers?

While home for the holidays, far from the worries of work, a hellish commercial for Massage Envy unpleasantly reintroduced those anxieties once more. The advertisement portrays an office worker visibly fatiguing her body in a rapid-fire montage as she drearily takes a seat at her desk, day after day. The commercial advocates the services of Massage Envy to remedy such physical toils of white-collar labor, but only to restore the office worker back into the exhausting cycle of work that hurts her. The cynical tagline “Keep your body working” suggests the massage cannot be enjoyed simply for its own sake, but only insofar as it contributes to the productivity of the workplace, thus recalling the cynical observations of the subreddit ABoringDystopia. This subreddit catalogues the ways that “Advanced Capitalist Society,” oftentimes in its relationship to invasive Silicon Valley technologies, produces a reality both mundane and nightmarish. A sense of unspectacular dullness camouflages these dystopic phenomena from attention, making them all the more insidious as they are disguised—or simply accepted—as normal.

Death Stranding and Tacoma are two games that reflect our boring dystopia. They are both concerned with precarious labor, hauling cargo, and data collection, and both feature labor contexts of granular workplace surveillance. In Death Stranding, players are confronted with the constant monitoring of their labor. Sam Porter Bridges, transcontinental porter in a post-apocalyptic United States, grinds away as a subcontractor in a logistics gig economy akin to DoorDash. Every step, rest, and detour is constantly tracked and logged for performance review, thus incentivizing players to optimize play in order to achieve high marks that will streamline advancement in the game. Similarly, one of the first actions players must accomplish in Tacoma is to sign a contract that surrenders their character’s data to the Augmented Reality (AR) system of the fictional Venturis Technologies corporation. Protagonist Amitjyoti “Amy” Ferrier explores the eponymous spacecraft to obtain the artificial intelligence hardware ODIN that will shed light on the mysterious disappearance of its crew, all while reviewing relevant AR footage collected by the system to formulate a clear timeline of events. Thus, Tacoma is a game about auditing a workplace and reviewing collected data. Both games bring to mind the body’s disposability under capitalism, in which bodies must always be either working or recovering in anticipation of further work. The Massage Envy commercial belongs to a boring dystopia because it appeals to the guilt we feel when we relax, as we often feel pressured to use our time more productively. Reframing relaxation as actually contributing to productivity, by re-energizing oneself for the office, assuages that guilt. In Death Stranding and Tacoma, workplace surveillance registers every action in terms of what is proper and productive performance. Thus, any other action—mobilizing politically, or even just idling for its own sake—is not valued in the eyes of the games’ corporate overlords. 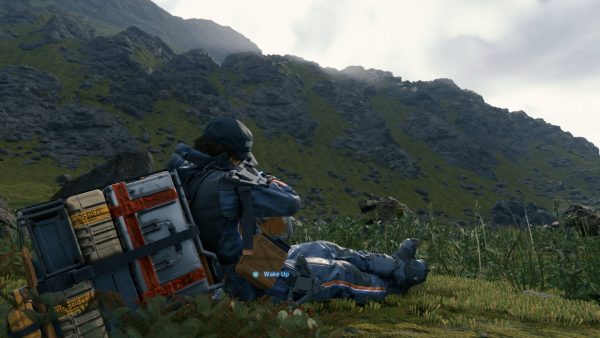 Workplace surveillance in Death Stranding is deployed as a means to exercise corporate control. Every action in the game is quantified. Players are told, to the second, exactly for how long Sam rests and sleeps. In the interest of saving time when delivering packages, players can alternatively restore Sam’s stamina by drinking servings of Monster Energy when the character is overburdened with work. At once ridiculous and real, the gratuitous product placement of Monster Energy in Death Stranding reminds me of the long-haul truckers and rideshare drivers I’ve met. Kept awake by a toxic concoction of energy drinks like Monster, Red Bull, or 5-hour Energy, these drivers spend long hours on the road to meet the unrealistic demands of their work. These drinks flourish because of unhealthy work environments that valorize the overexertion of energy and wakefulness beyond what is possible without their aid, pushing bodies beyond their limits to maximize productivity: a caffeinated capitalism.

The bracelet that monitors Sam’s physiological metrics keeps him trussed to the vigilant eye of his employer Bridges, encouraging players to keep him productive. This constant surveillance has real-world parallels in the electronic logging device used in long-haul trucking, broadcasting live metrics of travel speed and location to the company, eliminating the need for manual log sheets. What this has created is a workplace of constant surveillance, an asymmetric relationship between employer and employee where the latter must always be on guard for fear of being surveilled. Because truckers do not know whether or not they’re being monitored at any given moment, they must assume that they’re always being watched, just to be safe. This is the principle behind the panopticon prison structure, which internalizes discipline. In the context of trucking, the employer does not need to reprimand the employee for taking too long a break; instead, the employee is always on guard against potential surveillance and consequent reprisal. 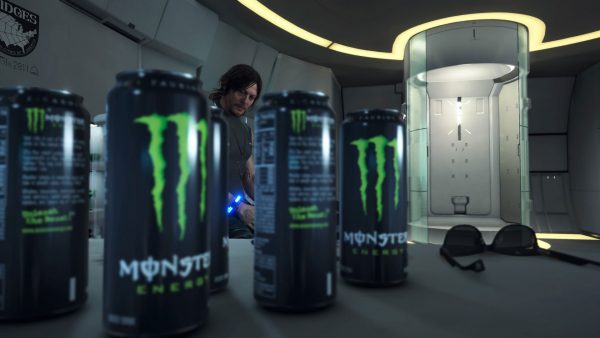 The same is true in Death Stranding; Sam must always perform for Bridges. As players, we are constantly made aware of our every action. Upon completion of a delivery, the game presents us with metrics and animations that detail the journey taken. We see firsthand when we’re not hitting the shortest possible paths to our destination and thus become more self-conscious the next time around. Even when letting Sam sit to rest, the presence of the stopwatch ticking away reminds players that every passing second is potentially lowering the delivery score for lack of promptness. As a result, I’ve often pushed Sam and his premature infant companion BB to utter exhaustion, endangering their safety and causing a stressed BB to throw a noisy tantrum during time-sensitive deliveries. For real-life truckers, that compromise of safety under surveillance can be deadly. Downtime, once enjoyed in privacy, now becomes a ticking clock as drivers become self-conscious of company surveillance and the potential for punishment for perceived lack of optimal work performance. Chris Baraniuk for The Atlantic puts it simply: “Truckers are on the forefront of workplace surveillance.”

Tacoma similarly envisions the deleterious effects of corporate surveillance as it permeates contexts beyond even the workplace. As AI data sluggishly uploads onto Amy’s storage device, players are free to wander about the spacecraft’s work and living spaces to get a feel for the setting’s mundanely dystopic corporate culture. Reading private messages reveals one crewmember’s solicitation of an on-demand therapist via the app Ori, a service that resembles real-world startups like Talkspace. Ori reflects the ongoing gig economization of therapy that depresses wages and sidesteps labor regulation as salaried workers are increasingly and precariously redefined as contract laborers, much like the staff onboard Tacoma. As the millions of uninsured are priced out of quality healthcare, venture capitalized startups like Woebot peddle the practices of unlicensed artificial intelligence crowdsourced through repeat interactions and built upon the platform of Facebook messenger. As such, Woebot collects vast pools of sensitive data about users’ mental health and conversations, which Facebook owns and sells. 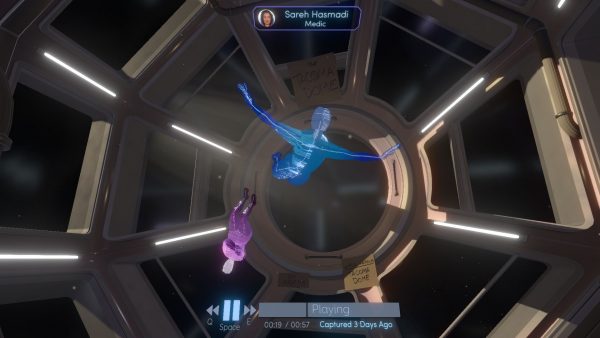 Tacoma recreates this reality by reminding players that Venturis ultimately owns every verbal exchange, email, and message that Amy recovers. Before even entering the craft, everyone must first read and sign complex legalese. As an outside subcontractor, Amy has limited legal protections and must yield privacy rights to the authority of Venturis. She surrenders her body to the network, granting perpetual retention of positional and auditory data and releasing the company from any liabilities via a non-disclosure agreement (NDA) that obligates her to strict confidentiality. The crewmembers, players discover, similarly capitulate to corporate surveillance and discretion to retain employment, as their limited status as contract workers means the constant threat of nonrenewal. A message emblazoned over the entrance door to Tacoma ominously sets the tone of the game: “Venturis is There, no Matter Where You Are.”

The company reinforces absolute obedience via the granular surveillance of workers and a Loyalty economy that rewards lifelong fealty to Venturis. Loyalty, we learn, has become a form of currency that can be accumulated through the continual employment by a single company and investment in company assets, such as Venturis’s vacation homes. As Tacoma tracks every move and message within its walls, its workers frequently worry about their ability to be renewed, as their livelihoods depend upon the extension of their contract. After snooping around the trash of operations specialist Clive, for instance, players can discover rejection letters from rival company Carnival because he lacks the necessary Loyalty for employment. Thus, workers often perform the role of a content employee to demonstrate Loyalty. In the AR recording, Clive playfully nicknames the station administrator “Mon Capitan,” but exploration of his personal quarters reveals that he’s been studying a corporate guide on encouraging banter in the workplace by using nicknames, all in the name of workplace synergy and productivity. A poster in the health unit even suggests that workers can gain Loyalty by reaching company fitness and dietary targets, thus incentivizing workers to equate their own health with loyalty to the company and financial security, rather than for individual enjoyment and betterment. 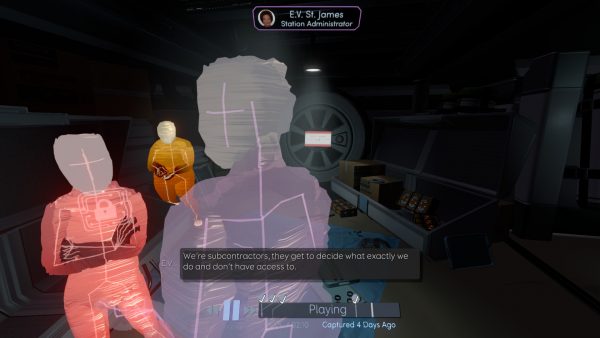 This combination of yielded privacy rights and the constant drive to maintain Loyalty creates a workplace of panoptic self-discipline for fear of potential termination. Time and time again, players are reminded of the vigilant watch of Venturis even as Tacoma’s crew have limited access to ODIN’s network systems, much to the frustration of those overseeing its maintenance. The corporate blackboxing of ODIN prevents contract workers from opening communications to transmit an emergency distress signal, and the interstellar setting of the game physically distances its conscripted workers from the safety net of earthbound friends and family, thus making them more vulnerable to the manipulations of the company. However, only in the willful disobedience of company protocol is the crew saved and this gross corporate corruption brought to light. A late-game act by one crewmember uncovers the elaborate conspiracy that incriminates Venturis for orchestrating the disaster that endangered their lives in the first place. While staying silent and following company rules may benefit the company and secure Loyalty for the individual worker, Tacoma suggests that the very recordings taken by Venturis can be redeployed towards the goal of worker solidarity. When the game reveals Amy as an undercover guerilla activist sympathetic to the plight of Tacoma’s workers, her careful inspection of each AR recording and message is thus re-contextualized as gathering evidence against corporate criminality. By plainly visualizing corporate wrongdoings and the tangible means by which workers can (literally) liberate themselves from impending disaster, the game re-shifts the gaze of corporate surveillance against Venturis, casting light on their misconduct.

While Death Stranding and Tacoma may draw from the real absurdities of late capitalism in crafting their respective boring dystopias, both games also share the hopeful prospect that worker solidarity is key to a way out of a dismal status quo. The solutions to addressing—or even resisting—such catastrophes are systemic. Players in Death Stranding work together with other players online to rebuild the infrastructure necessary for connectivity, while Tacoma fervently advocates the continued need for labor unionization amidst automation and gig economization. At the individual level, reaching out in solidarity with other workers is crucial—not because it contributes to workplace synergy and productivity, but because only through collective action can social good and the needs of human beings be prioritized over corporate profits.