Due Diligence: The Loop is Dead, Long Live the Loop

Real talk: I’m sick of fucking about in games.

I just want to do stuff here and now.

I’m not talking about games where the journey is the point, where traversing through a space is core to the experience like Death Stranding or Flower. I’m talking about games that are explicitly about doing stuff. Like Assassin’s Creed, and Far Cry, and Batman: Arkham whatever, and now, apparently, Metro. Games that are a collection of activities spread across a map. Stuff I’m expected to tick off my list until my list is empty, or I get bored and throw my list away.

Don’t get me wrong, I like these types of games – love them, even. I thoroughly enjoy the methodical nature of working through a thousand discrete objectives. There’s the dopamine hit of a tiny success, yes, but I’m also totally into the self-contained nature of these activities. Each is a little problem to be solved. Whether that be a stealth murder spree through an enemy camp, or a fuck-off mutant bullet sponge I’m dismembering with a rocket launcher – it’s a little five-minute story unto itself. I’d rather 150 of these than another Uncharted.

But I rarely get to finish these games. In the last decade I’ve completed a handful: Assassin’s Creed Origins, Homefront: The Revolution, and Mad Max, and I think that’s it. Why these three? Simply put, their loops are incredibly tight, where so many of their peers exhibit some form of friction; a niggly little nubbin within the core loop that stops me barreling through my checklist.

Origins is great because it’s so well lubricated. It’s a game that wants, with every fiber of its existence, to be played. Objectives are small – five or ten minutes long – and close together. There’s almost zero downtime. I can sit down and just go. Hours vanish as I slip and slide from assassinations to pitched battles to spelunking to climbing up and then jumping off really tall towers.

The problem is that most stuff games – let’s call them that – fail to capture this exceptional flow (it’s really hard to do). They offer up all the repeated content I so enjoy, but then don’t provide the momentum I need to keep me plowing through it. And to be clear: once I stop doing stuff for any length of time in a stuff game, I’m done for good. I will happily run the same types of encounters many, many times, as long as there’s nary an obstacle in my way. But that transition from activity to activity needs to be smooth. Not necessarily quick, mind, but I need to be able to finish one and know exactly where I’m going next.

With this in mind, let’s look at some games that haven’t managed to keep me coming back for more. 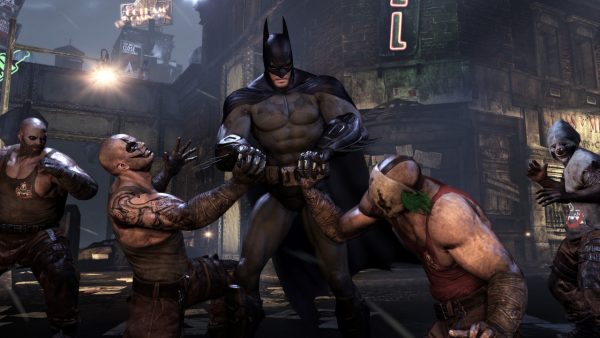 I absolutely loathe Batman: Arkham City. Asylum is not a stuff game. It’s a precision engineered Metrioidvania with some of the tightest pacing of any game made this century. Levels twist and turn and open back into hub areas and branch off and reveal shortcuts and interconnect and are somehow singular spaces but also part of one giant whole. It’s a splendid game and an absolute lesson in spatial design.

City, by contrast, is a mess. It’s essentially Asylum levels cut up and spread around an open world. Devoid of a larger context, they are merely collections of hallways and air ducts; functional geometry rather than places to be explored and mapped.

The open world in City is atrocious. There’s no point to it beyond this being a game released in 2011, when open worlds were du jour. It’s n-shaped, which makes travelling east to west far more time consuming than necessary. This makes the small open world feel bigger, but really diminishes the elegant flow and pacing Asylum achieved.

City wants to be an open world action game whether that’s a good fit for the series or not. It isn’t designed with frictionless playability in mind, rather the pursuit of its own ideals. Following the game’s critical path is a fuck about dance around the map, where I go here, then there, then over here, then back over there.

This is all in the service of enticing me with the myriad stuff that litters the streets and rooftops of Arkham City. Little puzzles, streetfights, and collectibles. Many of these aren’t completable at the beginning of the game though, as unlockable upgrades are needed to finish them. There’s no good way of discerning whether I can tackle a particular activity without going up to it and taking a close look, which leads to lots of wasted time. This sort of stuff needs to be readable from afar, lest I begin to ignore it entirely. 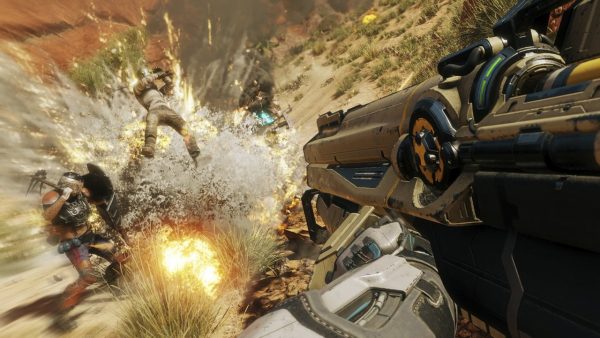 Rage 2 paints its requirements right on the map. Every activity is assigned a difficulty level from one to nine. This is very good, transparent design as it lets me know if I’m equipped to even tackle an objective. Rage 2 is very much an FPS Mad Max in how it manages its stuff. Its map is filled with outposts and enemy encampments. I need to clear these and then scavenge for various currencies I can invest in player and vehicle upgrades. It’s a great and simple and compulsive structure. Work through locations, slowly getting more efficient at working through locations. Beautiful.

Mad Max has lots of lovely touches that, when added up, compelled me to clear every one of its hundreds of locations. Its map is divided into regions. These each have their own checklist and percentage completion bar. They also have fast travel points and hot air balloons which can be ridden high into the sky. From there, I can tag all nearby locations which not only reveals them on my map but also shows me the type and difficulty of of their activity. Transparency as far as the eye can see. With Mad Max I always knew what I was about to do, how it contributed to my local completion goal, and where my next fix would come from.

Rage 2 is ostensibly very similar, but is missing lots of these systems. Nearby activities are flagged as question marks on my radar, but I can’t tell what I’m getting into until I’m there. Fast travel is limited to three points on the entire map, which itself is much hillier than Mad Max, making zipping from location to location more time consuming. There’s also so many currencies – seven, I think – that the thrill of clearing a location is tempered by the confusion of what I’ve actually achieved, scrolling menus to see if it’s at all useful. The actual loop of shooting and looting is pretty tight in Rage 2, though not slick enough to prevent the question of just what am I doing with my time? from creeping in.

The game’s structure is that of a great crescendo of achievement quickly followed by do it all again six more times in different locations. A successful stuff game is cumulative. I chip away at an overall percentage completion bar, clear a district, curtail the activities of a faction. I never go back to the start and do it all again. Shadow of War fails because it’s seven identical campaigns played back to back. 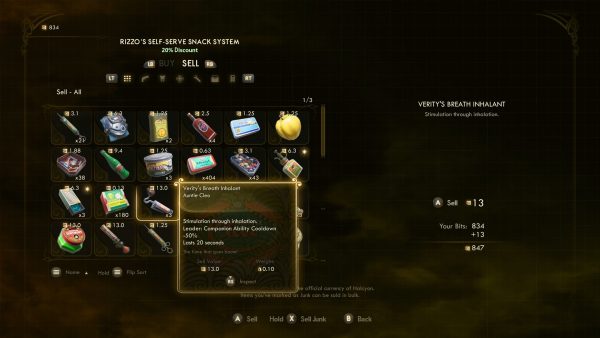 There are other little things I’m just done with in stuff games. The first time I stealth killed a robot and stripped it for parts in The Outer Worlds, I said to myself: I love doing this, I am going to play the shit out of this game. And then I spent the next 40 hours opening doors into loading screens, running around labyrinthine interiors to find quest givers,  further exploring empty spaces to locate vending machines to sell the useless loot I just gained, and doubling back to my ship to change party members. Put. That. Shit. In. Menus.

Let me call up an NPC and tell them their boy was eaten by a Mantisaur. End of quest. Let me sell my crap into the ether through my smart watch – my 35 guns are somehow sliding back into a Diet Pepsi machine as it is, so let’s just agree to remove that one final layer between me and total abstraction and I’ll be on my way.

And while we’re at it, please don’t make multiple variants of every health item. Having seven different pickups that all increase my health regen over time – but have different names and portraits and are stacked separately in my inventory – is unreadable and unworkable and I will disengage from the whole system and just sell everything.

And while we’re at it being at it: all of Metro Exodus. The monster fights were the obvious weak spots of the earlier games. Filling an open world with them, when that open world is also filled with finite resources and weapon degradation is a surefire way of spoiling everything. They don’t add tension to travelling around the maps. Tension in a Metro game is me carefully navigating a space and mapping it in my mind; sneaking past enemies, extinguishing lights, setting traps; lying in wait for a moment to possibly, maybe, potentially – if I really need to – launch an attack. Invisible enemies jumping out of the sand to maul my face off don’t add tension, they just bleed me of my resources as I go from one unavoidable encounter to the next.

Exodus is everything that makes me disengage with stuff games all rolled into one. It is slow. Its activities are opaque until I’m on top of them. Its loop is huge and returns me to the beginning every dozen hours. Its resource management adds hassle, not tension. Metro Exodus should not have been a stuff game. An open world Metro game, sure, but not like this. 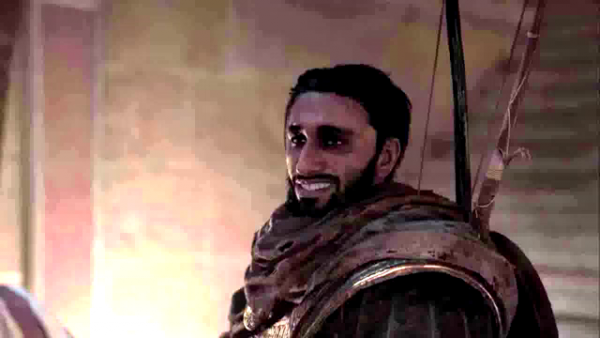 With all this moaning in mind, I’ve developed a manifesto for stuff games that, if followed, will lead to surefire success (with me, at least):

Assassin’s Creed and Far Cry probably aren’t going anywhere. I wouldn’t want them to, if I’m being honest. But we all need to be clear on what these games are. Content treadmills aren’t great artistic ventures, but they nonetheless can be artfully designed. So let’s go out and grease us up a big batch stuff games. Toss out the fucking about and hone them to a sharp fucking point. These games are meant to be played. Let me play them.