How various videogames depict seasons of the year is something rare to see examined directly. Autumn in particular evokes changing leaf colors, colder weather, and the start of the school year in North America, and stories with this setting adopt that cozy nostalgia. Think, for example, of the autumnal colors and jack-o’-lantern decorations around the school grounds in the early portion of Bully, or the after-school mischief and chilly sweater weather of recent games Oxenfree and Night in the Woods. Games can even revolve around a specific day in the fall, as in the twilit Halloween revelry of Costume Quest. Sometimes, the significance of a fall setting is how it marks the end of summer and what seasonal change can mean, like how Forza Horizon’s picturesque autumn landscapes amidst a sprawling music festival celebrates the waning summer hours before people must return indoors when the weather turns cold. There’s an inescapable allure to the fall months, evoking homespun comforts and the bittersweet sense of time passing. You can feel it while driving through scenic turnpikes to catch sight of crimson and orange forests, hear it in the acoustic indie folk of Fleet Foxes on the radio, and taste it in the seasonal brew of pumpkin spiced coffee.

Through environmental storytelling and affecting seasonal visuals, Dontnod Entertainment has demonstrated a particular ability in crafting a tangible sense of time and place. Their 2015 adventure game Life is Strange takes an understated approach to setting, swapping the grungy, Haussmannian cyberpunk of Neo-Paris from their previous game Remember Me for a sleepy wooded beachfront town taking place in early October. Dontnod’s vision of autumn is appropriately cozy and nostalgic, conveying tender, coming-of-age moments like reuniting with old friends at the start of a school year amidst fall signifiers like lumberjack flannel, maple pancakes, knitted sweaters, Halloween monster movies, and crunched leaves underfoot. Warm, golden light shines through tree branches, silhouettes telephone wires, and blankets supine daydreamers relaxing around Blackwell Academy. Simply looking around in the game is a pleasure, and it’s easy to unwind in Life is Strange’s crisp October atmosphere. 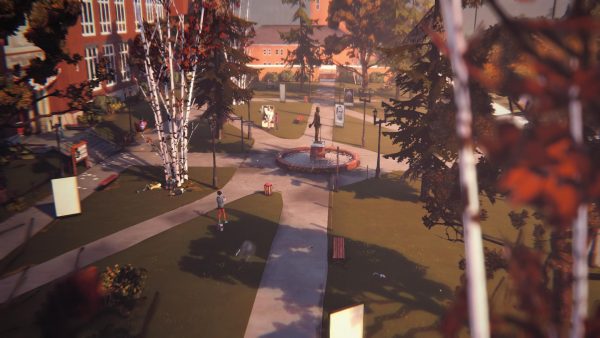 Life is Strange underlines its sense of place in the virtuosic opening credits sequence that instantly transports us to a familiar, quotidian world by minimizing gameplay in favor of mood, narrative, and character development. Our protagonist Max Caulfield leisurely walks down a high school hallway, temporarily drowning out the distractions around her with wistful music through earbuds and simultaneously welcoming us into her inner world. She narrates her thoughts on classmate passersby and the posters for Halloween parties plastered on walls and lockers. The carefree summer months are over; fall means returning to school, aging, deepening friendships, and finding personal growth amidst peers and teachers. Max pines for October to last forever, naming it her favorite month. She’s reading a loaned copy of The October Country by Ray Bradbury, and in her diary, she notes how the author “nails the autumn atmosphere of small towns” and eagerly awaits the moment to “bust out the big coats and sweaters or scary movies.”

The location of the game, Arcadia Bay, Oregon, mirrors the kind of small town autumn atmosphere In Bradbury’s novel. Nestled in a forested harbor, Arcadia Bay is a Pacific Northwest fishing town that lives up to the mythical title of a utopic “Arcadia.” Writing for Kill Screen, Brendan Hesse notes that the prevalence of Pacific Northwest settings in videogames affords the kind of  “supernatural sci-fi and magical realism” stories due largely in part to the lasting legacy of Twin Peaks and The X-Files, two influential works set or shot in that area. Bucolic landscapes mesh well with the spooky stories told around Halloween. The forests that surround Arcadia Bay are shadowy and mysterious, teasing secrecy beneath the ordinary.

The setting is also steeped in the past; Max is returning to Arcadia Bay after having lived there during her childhood with her best friend Chloe Price. Life is Strange boasts time travel mechanics, but simply revisiting a childhood town is a form of time travel in itself. There’s an inherent sadness in coming back to a place that hasn’t changed, but Max recognizes how the people have and how much she’s changed too. A sequence in the second episode brings Max to the Two Whales Diner, offering famous greasy cheeseburgers and “old fashioned service.” Indeed, much of the town seems rooted in the past, including mom and pop stores and faded suburban homes.

Starting a new school year is also a form of time travel. Like Max travelling back in time and learning from her mistakes, we return to recognizable places and greet familiar faces, but each year we carry new experiences that allow us to make better-informed decisions. Thus, the fall semester is like a reset button where everyone returns to school back at square one. We grow as people even though our environment remains largely the same. The repetitious school calendar in the autumn demonstrates how life is cyclical: students move forward, accumulate experiences, and return as better people each year. 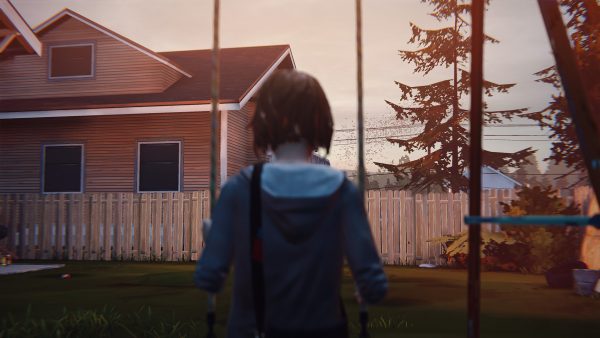 Samuel Roberts’s thoughts on Bully for PC Gamer are useful in thinking about Life is Strange, observing, “the actual education part was largely irrelevant. It was the moments in between school that made it what it was for all of us, and that’s what Bully is about.” Life is Strange goes further with scenes where Max simply talks to students and faculty around campus outside of classroom contexts, allowing her to feel like a real teenager as she gossips and mingles with peers. School stories are so formative because the fall semester brings students together indoors, encouraging relationships to form or break. Humdrum, everyday moments in the game carry great importance for Max’s personal growth. Life is Strange smartly acknowledges this mundane significance with allusions to photographer Henri Cartier-Bresson’s book Images à la Sauvette (retitled The Decisive Moment) and its eponymous concept. Bresson emphasizes that photographers must cultivate the ability to recognize the profoundness worth photographing in any given instant. The week of events in Life is Strange captures a formative period in Max’s life as she transitions from childhood to adulthood, like how a photograph captures a decisive moment. In particular, the small choices made throughout Life is Strange are decisive moments, and the game freezes and underscores such events so that we remember them.

Max Caulfield can remain in the moment forever because of her time travel powers, but she also admits that “it wouldn’t be a moment” if she lingers for too long. This thought reflects the maturity of Life is Strange; the game conveys the importance of leaving certain unavoidable events untouched, allowing time to move forward. Seasons must change, and autumn prefigures natural and personal growth. In that sense, Life is Strange identifies the wistfulness of autumn as characters feel the world around them changing. In one moment, Max sits alone in Chloe’s living room, and sounds from childhood memories flood back to the surface as the game pans across images of domestic stillness. In that instant, we share in Max’s moment of remembering and feel the tinge of bittersweet sadness of days long gone. Jessica Lachenal praises such scenes in her insightful piece for The Mary Sue, observing how these quotidian moments encourage players to reflect on their own thoughts and memories once Max finishes her voiceover. 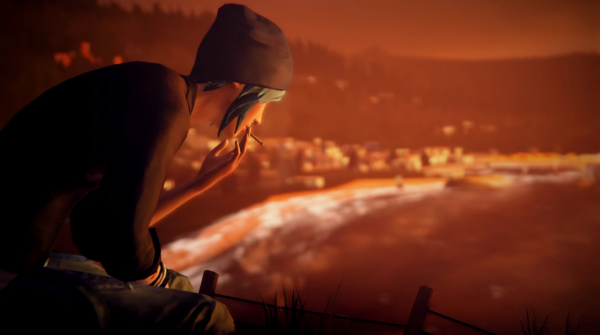 Another moment occurs with Max lying in bed with Chloe after a night of mischief, the sounds of birdsong and distant traffic spilling indoors. The warm morning glow seems to encase the room in amber, and Bright Eyes strums unhurriedly on the hi-fi. The scene is beautiful, quiet, and calm; Max and Chloe’s talk falls away to a comfortable silence, the characters lost in thought amidst great change. Elsewhere, the pair unhurriedly strolls along train tracks through lumber country, basking in a blossoming young love and homespun normalcy. Max’s return to Arcadia Bay for the fall semester carries bittersweet sadness as she recalls carefree innocence now slipping away. While wandering around Chloe’s sighing old family home, she notes things that remain the same—the same refrigerator, the same stinky pirate towel, the same old flip phone—but notes how much Chloe has changed and grown apart without her. These moments of riffling through objects and reminiscing evoke similar means of environmental storytelling as those in Gone Home, and especially the comparably autumnal melancholy of Home Is Where One Starts….

The fall months can be lonely, too. Time moves indifferently forward, moving people like Max along to prestigious schools and opening up bright future prospects while accentuating Chloe’s fear of missing out. Important choices are made in the fall, like applying for colleges or reestablishing friendships dormant in the summer months. Chloe’s fear is that her friends are moving onward and outward, and important choices like shutting out certain friends in favor of relocating to a new home locks people into a kind of destiny. Life is Strange may be a game about trying to control time—to reverse it and to change realities—and yet, it also recognizes the need to let things be and feel time’s duration. One of the game’s key texts is J. D. Salinger’s The Catcher in the Rye, but given Life is Strange’s themes, William Faulkner’s The Sound and the Fury comes to mind. In the book, a character passes down a watch “not that you may remember time, but that you might forget it now and then for a moment and not spend all of your breath trying to conquer it.” Max may initially fret about undoing unfavorable outcomes but later comes to realize that such worries will be outgrown in time. 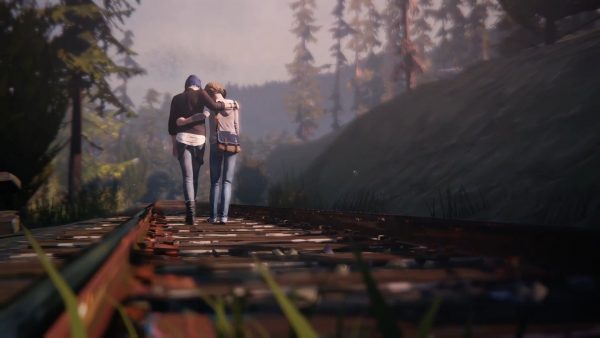 The ending of Life is Strange where Max acquiesces to Chloe’s decision closes off the time loop and returns to the status quo. Max reappears at the first day of the week, but having retained the lifetime of experience and knowledge she’s gained throughout the events of the game. She may be back where she started, but she learned from past mistakes and grew to become a better person for it. That particular ending is not unlike returning to school in the fall semester: same place, new person. Instead of fighting so desperately to change the course of time, Life is Strange emphasizes Max’s need to simply sit and reflect on the changes occurring all around her. Soon, all people must move apart or onward, whether to different friend groups or onto faraway places. Autumn lasts only for a moment anyway. One week in October can seem like forever but it too must eventually become a memory. No matter, though; we will return wiser once more.

Tags: Forza Horizon, Life is Strange, Night in the Woods, Oxenfree, Remember Me
← Art Tickles: Feast of Appetit!
Off The Grid: Infinite Dunamis →