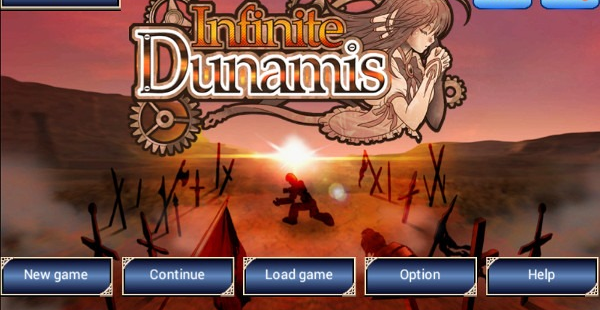 Off The Grid: Infinite Dunamis

Some readers may remember my foray two years ago into the mediocre JRPG, Grinsia. It was nothing truly special and I’d probably have forgotten about it if not for its infuriating bug that randomly crashed the game. It was developed by Kemco, whose rap sheet, nowadays, consists of mediocre sounding mobile games. However, I’m not bringing up that game just to take one more potshot at it. No, we’re here to talk about yet another JRPG developed by Kemco, but this time they published themselves, with decidedly better results. Unfortunately, Infinite Dunamis still leaves us with a mediocre game with a few too many useless bells and whistles.

Infinite Dunamis tries to have both an interesting plot and characters but fails to really develop either. The characters’ secret backgrounds can be guessed from their first line of dialogue and every twist could be predicted by even the thickest of people. That being said, it is entertaining in a nostalgic sense, like a warm blanket or a piece of your favorite pie. It hits all the JRPG high notes: evil empires, dark secrets, and a brooding main protagonist. If the creators had been able to delve into the depths of their characters then we’d have an interesting cast, but they fail to rise above their character archetypes.

There’s one character in particular, Luke, who is worse than mediocre. For most of the game he acts like an entitled jerk because of a childhood trauma, only showing the slightest kindness towards naive princess Estelle. It’s clear a character arc was set up for Luke to learn to trust again, but once it comes up it’s poorly done and makes him look even more childish. Even when  the mysterious traveler Vince expresses regret over his past misdeeds, if he doesn’t say the magic words “I’m sorry” then it’s Luke’s god given right to act like a spoiled brat. I have put up with characters like this before in other RPGS, like say Tales of the Abyss; the difference being that those characters’ arcs actually had depth and meaning. Luke on the other hand has one scene where he realizes that he’s been a real tosser and he has to trust again. One scene and all his trust issues poof away like a candle in the wind. Amazing, to say the least. 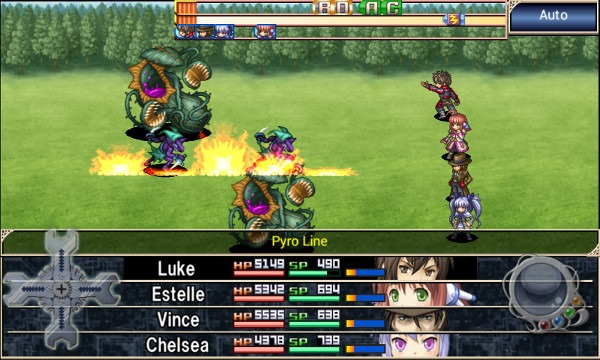 The setting had potential: a world fifteen years removed from a war in which humanity just barely defeated a robot army of their own creation. However, nothing interesting is really done with it. We’re still stuck in a medieval fantasy world that just happens to have robots and for some reason a magical pickup truck. These appear more as oddities to the player than as actual plot elements, seemingly put there to justify the game’s use of the word steampunk.

While the plot may be lacking, the gameplay has the opposite problem. Despite solid core mechanics, the game is overstuffed with useless features. It’s a turn based RPG where you and your opponents swap whacks to the shins till someone dies. The bar at the top of the screen shows turn order, which can be altered mid–battle by various factors such as speed and special moves. Everything else the combat throws is rather useless. Various small icons can cause different effects to the character whose icon lines up with it, timing these can be rather finicky and the bonuses they provide are negligible. Not to mention, that your party can buff itself just fine without the extra bonuses. Then there is the Accel gauge which can let your character hop right to the front of the line if you fill it up. However, the Accel gauge fills so slowly that it only activated once in my entire playthrough. So, you’ll forgive me if I forgot most of that in the heat of combat since these mechanics are easily ignored and poorly explained.

This is the game’s main sin: its clunky explanations. Everything is explained via dry help menus buried away. It took me quite a while to even figure out how to get new weapons for a certain character, let alone the above Accel system. I mean, I don’t need every little trick spoon fed to me, but I should really not have to do so much reading to understand something as basic as the core combat mechanics. Especially when most of it is superfluous anyway. 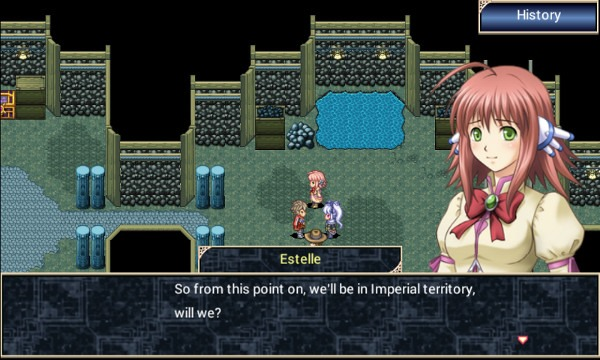 Speaking of superfluous, Estelle’s methods of customization beg the question: why? Every other character has the ability to learn different magic and skills via different equipment and grow stats by leveling up. I enjoy learning new skills and what not in this way since it encourages you to try out new weapons. Estelle, however, uses various crystals dropped by monsters to level her stats up.  The crystals, however, are so plentiful that it becomes more of a chore to keep all her stats up to par and could probably break the game if I was more experimental.

Despite my better judgment, though, the game grew on me in a weird way. The dungeons started out as simple affairs that slowly grew into sprawling labyrinths. I cleaved through enemies with little trouble outside of the occasional difficulty spike. The core combat is enjoyable and I had fun traipsing around the world map looking for my next dungeon. It brought back those warm feelings that I get when I play a game like Final Fantasy VI. It’s the pure simplicity of having fun with a game and ignoring minor imperfections.

The game feels like a warm security blanket that comforts you and brings back fond memories of gaming’s yesteryear. However, looking at the blanket closely reveals that it’s frayed at the seams. Those who enjoy the genre won’t be left wanting but could do much better considering the volume of the 3DS’s library.