The Japanese style role playing game was a strong force during the early years of the gaming market and while its popularity has waned in recent years, it still commands something of a following. The genre delivered relatively strong stories for the time, while giving stat nerds plenty to love. Though they could be terribly unforgiving or confusingly vague, there was a time when you simply couldn’t find that kind of depth and complexity in the competing platformers or shoot ‘em ups. The genre has outgrown some of those more frustrating aspects; unfortunately, it also seems to have given up a lot of depth in the process  However, there is still a crowd longing for those days of old and a byproduct of this is Grinsia.

Grinsia is a throwback to those days of yore, originally released for mobile phones and ported to the 3DS in May 2014. It was developed by Kemco, who some will remember for the infamous Nintendo 64 port of Daikatana, which flopped horribly along with some other notable stinkers. The publisher Nicalis, best known for the port of Cave Story, also had a hand in this particular mess. When the game was first released on the Nintendo eShop, an attempt to patch a game-crashing bug made it much, much worse. That alone would be enough for me to say: avoid this game. Yet even without that horrendous bug, Grinsia is still awful.

People often see the 8 and 16-bit eras as a time where the stories were allowed to be full of cliches or not make any sense. Of course, Final Fantasy 4 and Cecil’s path to redemption or Earthbound‘s utterly bizarre journey show this for the misconception that it is. They are remembered fondly by people to this day. Grinsia fails to grasp that concept, instead using cliches to weave a forgettable tale. 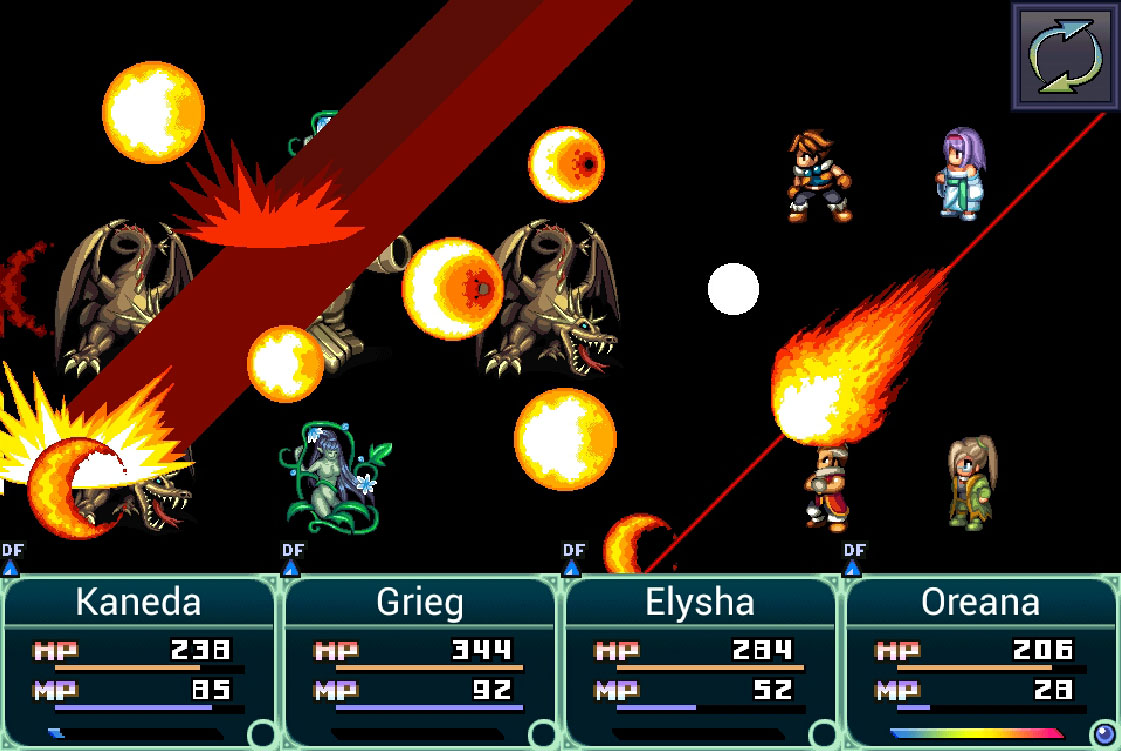 The story follows a family of treasure hunters tasked by a goddess to stop an empire backed by said goddess’ sister. This involves the retrieval of ancient relics, which is all you really need to know because most people can fill in the rest without actually having to play the game. It reeks of a job done by amateurs rather than a professional writing team. It could have been saved by at least a little bit of self-parody, as tired as that is for this genre. However, Grinsia’s developers stand by their decisions all the while seeming embarrassed by them.

The gameplay itself is probably the only decent part of Grinsia, but even that is not enough to save it. If you’ve played a turn based RPG at any point in your life, then you’ve played this game. You have menus to select your actions in battles and you and the enemy take turns whacking each other till one of you falls down. Each party member levels up and learns new skills that suit their role in the party. The problem is that everyone, except for your healers, has a pitiful amount of mana points and can eat through them in about three to four battles, leaving you with your basic attack command to save the day. Surprisingly, it does that job well enough due to the games screwed-up difficulty curve.

That aside, well designed JRPGs tend to have colorful dungeons with interesting things to see or possibly creative puzzles to solve, like in Breath of Fire. Grinsia, on the other hand, which already borrowed its story from every poorly made JRPG ever, decided its dungeons should come from there too. There are the standard array of caves, ruins, and the requisite land in the sky area with a few seemingly interesting puzzles that are solved more by trial and error than actual skill. The high encounter rate becomes frustrating when all you want to do is get through a room’s challenge. This all adds up to make a game that is just not fun to play.

This game is a disaster made by people with little love for the genre. The developers clearly had no idea what made these older games enjoyable. Instead, they opted for a paint-by-numbers routine that I’d expect from a college student’s first project in game design. The story is complete garbage and the gameplay so repetitive that I fell asleep during battles. That, combined with a game breaking bug, leaves us with an awful port of an awful game. If you haven’t played Bravely Default, then do that and see this type of game done right.