Taylor Hidalgo captures one of the breast examples of the eating experience.

One of the best parts of a hibachi dinner experience is the theatrics surrounding the food. Trained chefs, specializing in intricate handling of both food and cooking equipment, whirl metal utensils against the metal grill while an eruption of steam jets from an onion volcano. There’s chanting, singing, and silly faces drawn in fire all performed during the cooking.

After the food is prepared, the fires go out, and the chef bids their farewell from the table. The ceremony becomes a lot less theatrical, but no less indulgent. The food—spiced with salt, pepper, oil, soy, and sesame—is piled in a small mound and waiting to be eaten. Each chopstick morsel is another texture and taste to experience, served in copious quantity and awash in pleasant atmosphere.

Hibachi is a wonderful celebration of food in all its aspects: the preparation, the community, and the eating experience. As a ritual, it engages all the senses: taste, touch, aroma, sight, and sound.

Part of the joy of such experiences of food is the unabashed indulgence. The sheer joy of the spectacle, the flavors, the excess, and the energy are all a part of the package. They’re bundled together, doused in ginger, and taken as a whole, to be enjoyed in full.

Videogames are wonderful at excess. The explosions are unnecessary and enormous, the soundtracks swell, the textures and physics grow exponentially annually, and the file sizes balloon with every major release. Videogames have never had a problem going big. They do, however, have a problem with food. 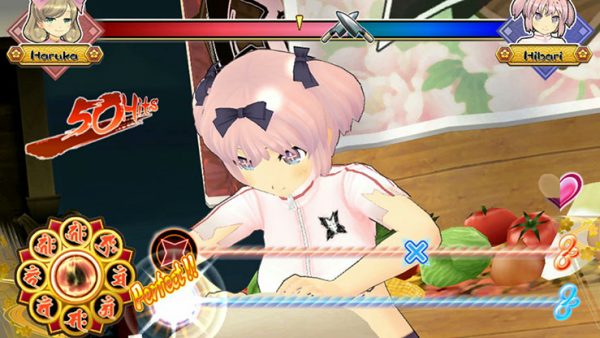 Food is about nutrition; without it, the human body would die out. Even nutritious foods with vitamins and antioxidants and carbs and fats and oils and proteins—can be poisonous if they lack the right balance. Videogames address this by turning foods into practical items: potions restore 100 health, a well-cooked steak dinner restores 150 over five seconds, pork buns increase the rate and amount of automatic regeneration, and pepper-spiced curry temporarily buffs the attack stat. There’s more to the experience than just the statistical advantages of having a cooking stat of 99, however. Food’s a lot more than the numbers that appear on the back of its packaging.

Food is also about experience. A hibachi chef coming out and unleashing a blaze of fire that reaches up to the vent hood would be completely pointless if the food was just about the mechanic act of dissolving one chemical into the other. Plating would be pointless, spices would be unnecessary additives, and all food would be nutritional slurries that come in unmarked white bottles. Instead, food is described as “golden brown” or “seared to perfection,” calling attention to the visual and textural that’s inextricable from the experience. Foods are glazed, sautéed, and splashed with color, and cast-iron skillets are plated over wooden blocks and brought out of the kitchen sizzling audibly over the din of the restaurant. Part of the eating experience is tied to the joy of having eaten well, with more than one sense sated.

Part of the problem is that indulgent experiences like those are hard to express. Games can’t make their ones and zeroes taste any better, or smell any more delicious through the off-blue glow of the displays. It’s hard to take a sensory experience like food, remove texture and smell, and have it radiate the same effect. However, as long as the excesses of games are tapped just right, the experience can be echoed in a satisfying way.

Senran Kagura: Bon Appetit! is a game about boobs and butts. It’s a rhythm game about cooking, but it’s really a game about bouncing bosoms, buxom babes and breaking bras. Bon Appetit! stars several busty ninja girls who enter a cooking contest to unlock a secret ninjutsu that makes one wish of theirs come true. Two women are pitted against one another to cook dishes for an old ninja who likes copious quantities of food and whose enjoyment of food explodes out from him when a meal hits all the right marks of satisfaction. 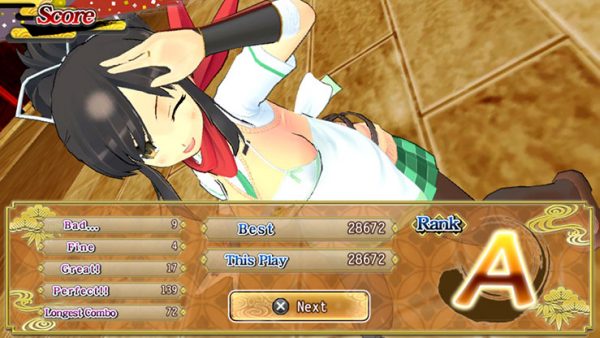 For each round won, the old man radiates enough energy to tear at the clothes of the losing ninja, who must subsequently cook in increasing states of undress. The soundtrack never lets off the energy, even between rounds. While the song is going, the camera swoops low, tracking up the legs of the competitors. The gaze lingers on T&A, tracking the body as if it’s a part of the meal. Every shred of clothing lost is accompanied by a girlish squeak or squeal, framed with sparkles, plated as a perverted visual spectacle for the player to enjoy between cooking rounds. Even when the food is shown, it’s rendered in bright, popping colors and piled higher than the judge’s head. Before long, it’s back to bits and bodies.

Where Bon Appetit! fails to be about food in any singularly minded way, it succeeds at getting the spirit of the food down in the form of sensory titillation. The entire play experience is wrapped up in service of butt shots and torn lingerie. The camera savors the sights and sounds, the play experience focused intimately on the color of the meals, the energy of the judge’s enjoyment, the dedication both ninjas have to the cooking craft, and the idea of decadent dessert at the end of a full meal. It captures the spirit of a great meal and clothes it in sensual and sensuous spectacle. Food in games is about purpose; food in Bon Appetit! is about pleasure.

The tragedy is one of representation. The fetishization should be on the food porn aspect of the dishes, not the naked bodies of the cooks themselves. The idea of cooking as creation, but the cooks as consumption, is genuinely unnerving. Although the idea of unfiltered consumption is fantastic at spotlighting just how decadent food can be, it fails at understanding that even unlimited meals have a stopping point. At a certain level, it becomes gluttonous, a gross misunderstanding of the value of both food and the game’s characters in favor of their bodies. Women aren’t consumables, sex isn’t the only meaningful thing that there is, and even overindulgence has to stop at some point. In that way, Bon Appetit! fails. 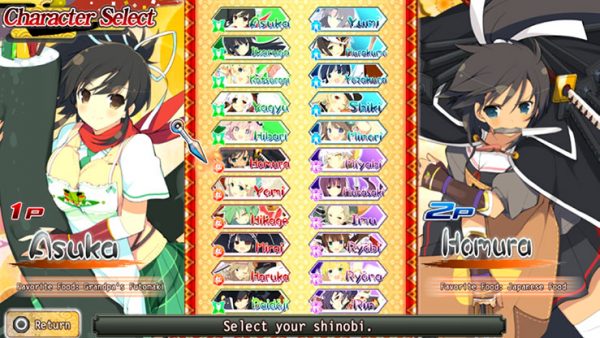 Although the unyielding male gaze throughout the Senran Kagura series is exhausting, the spirit of Bon Appetit! is probably the closest games have ever reached to “getting” food in the way a foodie might. There is far more to food than just the mastication, and more games looking beyond the crunch of constitution-boosting carrots is a great way to bring that food relationship forward to a more sensory, more spectacular, and more personal place. No part of the ninjas’ cooking contest experience is shy about its indulgences, which is as much a part of the experience as the mechanics are. The game refuses to settle for anything less than a thorough, deep, and unapologetically leering relationship with its passions, and that’s something that food could really use more of in games.

Granted, it’d be better to be about chicken breasts than human breasts, but not all passions will be to everyone’s taste.