Opened World: The Flâneuse in Flight

Miguel Penabella takes to the sky, tumbling twisting and turning.

Gravity Rush is about the joy and potential political subversion in navigating through urban spaces. Amnesiac protagonist Kat can bend relative gravity to her will, allowing her to rocket across the sky, plummet safely from above, and walk across ceilings and the surface of buildings. In the game’s most recognizable promotional art, Kat stands upright on the side of a towering skyscraper in downtown Hekseville, the city turned sideways from her perspective. Like the Wanderer above the Sea of Fog, the scene is transcendent and sublime, depicting Kat’s—and our—quiet astonishment amidst a fantastical city full of wonder and unknown possibility.

The floating city of Hekseville invokes the utopian visions of the then twentieth century future where elevated railways and floating dirigibles occupied the skies, and the game welcomes players with a cozy aesthetic of subdued colors, cobblestone surfaces, and parks lined with food vendors. The game’s pleasures lie in our ability to freely move through these spaces. As Kat slowly relearns her capacities to ascend and dive at great speeds, players share in her rapture as the accordions and swelling strings of the soundtrack soar along with her. There is power in these moments. By moving through the city in ways that the average bystander cannot, Kat has access to heightened modes of seeing. Floating above the skyline grants her a vantage point over the city and its networks in totality, while descending below it reveals the hidden scaffolding and tangled infrastructures that undergird it. The further she plunges into the depths of this floating world, the more she discovers the older, forgotten realms lost to history. Kat goes where she does not belong, slipping past police suspicion and eluding antagonists that arise later in the game. Her movement is as transgressive as it is thrilling.

At points in the game, Kat feels powerless. Unclear about her origins and initially distrusted by a city suspicious of this new outsider, she takes flight to find escape and freedom. Moving through the cityscape becomes her mode of expression, and the game’s old world European aesthetic, inspired by Franco-Belgian bandes dessinées comics, calls to mind the figure of the flâneur strolling through winding streets. These flâneurs epitomized the image of the modern urban man, bourgeois pedestrians who were fashionable and had the leisure time to aimlessly saunter through streets simply to see and be seen. Movement becomes the way to experience the new and exciting affordances of modern city life, and similarly, Kat slowly learns the ways of Hekseville through exploration. Thus, she represents the female flâneuse, a term that Lauren Elkin further specifies as she “who gets to know the city by wandering its streets, investigating its dark corners, peering behind façades, penetrating into secret courtyards.”

The flâneuse were pedestrian women who were just as active as their male counterparts in experiencing the modern city, both by melting into the scenery and crowds and also actively observing and shaping its look. At the same time, Kat embodies a radically different kind of flâneuse, one who transcends the boundaries of the ground and has a more politically subversive relationship with the city. As she propels herself into the skies, leaping across boundaries and even across huge gaps that separate entire city districts and upper level promenades from its dingy underbelly, Kat’s gaze wields significant power. Not only can she survey the infrastructures that tether Hekseville to the mysterious, stony World Pillar that extends upwards and downwards indefinitely, she can also witness the walls and bridges that partition people in different city sections, a class consciousness that becomes even more outwardly apparent in the game’s sequel. 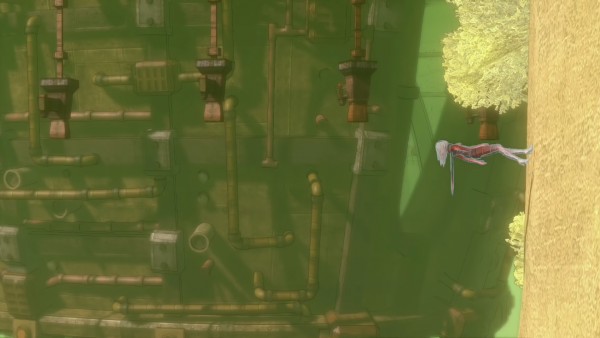 Kat’s means of movement through the world—drifting high above city streets or clandestinely hovering below and around its raised platforms—allows for new kinds of possibilities outside the intentions of the government and established infrastructures. In one sequence, Kat descends the towering World Pillar so far that the soundtrack fades from its familiar homespun warmth to an empty, ghostly howl, and the city above vanishes entirely from view. In this lower atmosphere, she moves beyond the city substratum that binds it to this Pillar, witnessing the metalwork cede to more earthy, wooden textures. Kat plummets for miles and miles, entering the ancient, skeletal ribcage inside the Pillar and a dreamlike expanse that sinks into the roiling pitch black sea at the bottom of the world. This sequence is a sublime moment, in which Kat and the player experience the bird’s eye view of an entire creation mythos, and this spectacle is all made possible by her ability to transcend city barriers. In a shrewd critique of the analogous emphasis on movement in Mirror’s Edge Catalyst, Maia Koliopoulos cites Michael Atkinson’s argument that parkour is inherently political, as cities are typically constructed to constrain movement in terms of efficient “object-oriented navigation.” As such, disruptive forms of mobility like parkour—and in the case of Gravity Rush, gravity shifting—allow Kat to circumvent Taylorist values of efficiency and reclaim agency and the joy of aimless wandering.

Ultimately, Gravity Rush offers creative re-imaginings of our social relations when we rethink the way we interact with the city. Gareth Damian Martin sees, in the game’s clear aesthetic influence from comic artist Jean Giraud (otherwise known as Moebius), the underlying optimism and romance of his belle époque wistfulness that “lay just beneath the surface” when grimy urban façades of The Incal or The Long Tomorrow are “washed clean.” By encouraging players to discover the city by hurtling between crisscrossed pipes and stairwells or gliding across the surface of a skyscraper, Gravity Rush turns exploration into hopeful superheroism even as the game’s power relations remain topsy-turvy, inverted, and oftentimes messy.

As Lillian Everette observes, Kat’s power emerges when she cedes agency as she falls, accumulating breathtaking speed and energy to slam into enemies at terminal velocity. So while Hekseville’s dense, multilayered cityscape may initially invoke a cynical cyberpunk world, Gravity Rush’s optimism is more closely aligned with superhero games like Batman: Arkham Knight or Insomniac’s Spider-Man, both about discovering heroism in one’s mastery of verticality and movement. Indeed, Kat even embraces the alter ego and spandex costume of the Dark Cat in one goofy side mission and later finds widespread fame as the city’s very own superhero, the Gravity Queen, after eliminating a rogues gallery of villains. Living in a secluded sewer pipe at the bottom of the city, Kat exists both at a critical remove from Hekseville society while immersing herself in its conflicts and the everyday bustle of its people. Like the flâneuse, she disappears into the cityscape even as she influences its very activity.

At the heart of Gravity Rush, however, lies an inherent critique of governmental failures to maintain infrastructures to the detriment of the public good. Flying around Hekseville, Kat quickly encounters the downed bridges, broken elevators, and faulty transport systems in need of repair, shattering initial impressions of the city as a glorious steampunk utopia. While Kat can effortlessly sail across city districts, the city’s inhabitants suffer a lack of public mobility while these infrastructures lie inoperative. Many of the game’s smaller tasks simply involve reenergizing the city by collecting enough gems to revive these rusty train lines and airboats for public use. Thus, Kat’s success lies in her patronage of public transportation. She finds joy and agency in her mastery over gravity, and this patronage is an invitation to share in this power of movement. Later in the game, when the mayor vanishes and a militant despot rises to power backed by a terrorizing military-industrial complex, Kat’s mobility around their military displays and underneath their watchful surveillance again becomes the means to undercut their authority. She climbs higher, further, and faster than the military’s cybernetically enhanced super soldier, toppling their supremacy. 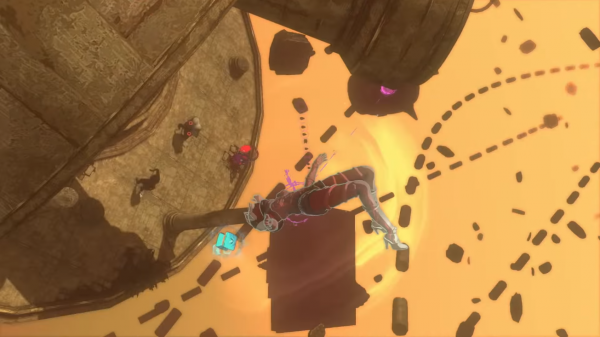 Like the aforementioned Mirror’s Edge, movement becomes key to counteracting dystopian powers. Fixing public transit becomes the way to invigorate the city and link people across districts, and Kat’s flight circumvents the kinds of barriers put into place architecturally, structurally, and socially. Her mobility not only allows her to be seen as a folk hero by its townspeople, but also compels us to see the city anew.

Tags: Gravity Rush, Mirror's Edge
← The Parable of Joel: Practicing Empathy in The Last of Us
Off The Grid: JackQuest →