A Metroidvania game needs to meet a certain minimum to be considered a Metroidvania: the game world must open up for further exploration as the player collect more upgrades. However, as with the example of Nightmare Boy, a truly solid entry in the genre must have more to show than just that. In that spirit I want to use JackQuest to showcase what to do and what not to do to make your Metroidvania game great.

Act 1: Exploration, or the art of being lost

Exploration is the heart of any Metroidvania game and the hardest concept for many games to perfect. Yes, you can slap together a series of caverns or what have you but if you’re constantly getting turned around then trying to explore just feels like it’ll get the player even more lost.  For a contrasting example, Iconoclasts makes exploring fun, giving us an interesting world to see and work out for ourselves. In that game, everything feels laid out and signposted, so even when you go exploring  the road less traveled you’re never left wondering where you are. When it came time to actually progress in the story I had a good idea of where to go, because it was always easy to recall which roadblock my new power could help me navigate.  I should want to explore my surroundings but also be able to make it back to the main path with little trouble. Not in a hand-holding sort of way, just making sure there’s always a clear objective. In this case, a map is a huge help but, at the same time, some basic landmarks are better for orienteering on the fly. 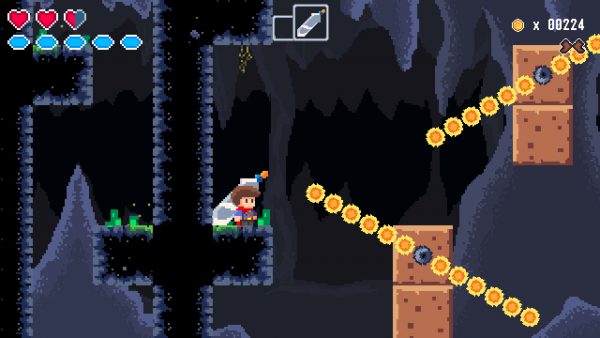 With JackQuest, I was always lost so I was endlessly looking for the next main objective ad instead ended up finding every optional trinket. Every area looked exactly alike with no real landmarks to use to find my way around. So my joy at actually progressing was short lived as I always seemed to find yet another secret that I really didn’t need at that moment. I found myself going in circles, passing the shopkeeper three times as I tired to locate the main path.  Even the map I was given after the second boss was useless as it was so zoomed in that by the time I found my next destination, I had lost where I was in relation to it. As a result I stayed lost for a remainder of my journey till I gave up out of sheer frustration.

Act 2: Upgrades, or how to feel cool and stave of the self-loathing

Most Metroidvania protagonists start off fairly weak but through a series of upgrades, either found lying around or pried out of a monster’s corpse, they can become a whirling dervish of death. Good upgrades make the world easier to explore and enemies more fun to fight. Whether it be through increased mobility or just a new weapon, finding upgrades should feel like a reward.

JackQuest misses the mark with bland upgrades and poor rewards for exploration. I found a load of extensions to my special meter while upgrades to my lacking health bar seemed few and far between. Jack already can infinitely wall jump against single walls, so getting a double jump felt redundant once I’d cleared the few roadblocks it was meant to overcome. I never felt the sense of progression that I should have, instead continuing to feel like a weak kid way in over my head. My other reward was opening up doors to earlier areas even though I knew there was nothing worth going back for. Less a reward and more a new way to become lost on a grander scale. 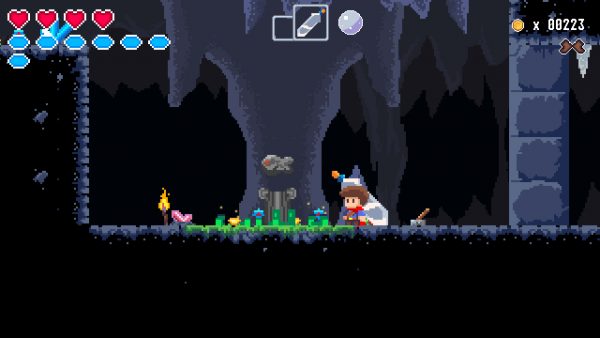 Act 3: In which I get annoyed then leave

The plot of this game is a really basic rescue the girl plot with some small hints of something more sinister what with a weird talking sword asking me odd questions and what not. That’s fine, I like simple plots when they are done well, they can be comforting. However all the bosses have names like Slime Boss and Serpent Boss, seriously. I know you have a retro vibe going but at least the games you’re trying to emulate would name their boss something silly like Slime Shady or Serpentico. It comes off as a poorly thought out joke, and trust me I’m a master of those… and with that I leave you till next time.