When Need for Speed Heat released a few months ago, developer Ghost Games worked carefully to distance the game as far as possible from Need for Speed Payback, assuring audiences that its car upgrade system would not involve loot boxes or otherwise resemble the disastrous, randomized “speed card” system of the 2017 game. This speed card system was routinely criticized, and for good reason. Dispensing with a traditional racing game upgrade system where players acquire performance parts from a garage, Need for Speed Payback introduces a convoluted system insidiously designed to thwart straightforward progression and compel players to engage in an exploitative in-game economy. While these Vegas-like mental tricks have become all too commonplace in big-budget videogames, it’s particularly ironic in Payback since the game’s heroes ostensibly fight against those very forces, seeking revenge against the crime outfit that governs a fictionalized Vegas underworld.

The speed card system works like this: players upgrade a car’s different performance parts using a corresponding speed card, rather than buying a specific manufacturer part. Each card has a level, brand, and up to three perks including bonuses in acceleration or braking stats. Equipping a car with multiple speed cards of the same brand nets a multiplier for those perks. What makes this system troublesome and potentially exploitative stems from the way these speed cards are acquired. Whereas in other racing games—even previous Need for Speed titles—the entire selection of performance parts can be purchased in the garage, Payback always only offers a randomized, limited quantity of speed cards at a given moment at one of four designated tune-up shops. Thus, a satisfying vehicle upgrade is typically thwarted given this artificial scarcity of speed cards, even when the player has a wealth of in-game currency (called “bank”) to purchase it. This purposeful restriction of tune-up shops ultimately contributes to the maliciously addicting design of the game’s systems, keeping player attention latched onto regularly scheduled speed card drops. In exploiting players who have to make do with this randomized selection of speed cards, Payback ultimately sacrifices the appeal of carefree racing and exploring altogether. 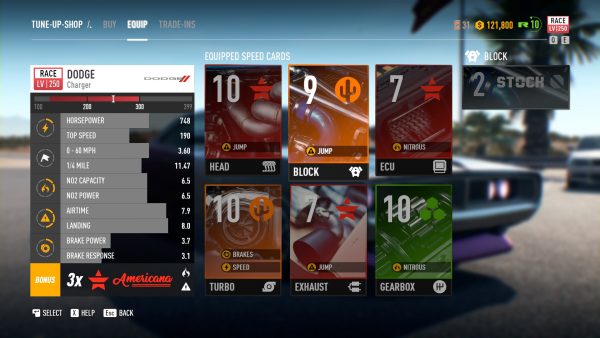 By randomizing the selection of available upgrades, Payback radically alters the structure of a Need for Speed game by compelling players to dutifully check tune-up shops to browse the latest supply of speed cards as stock is refreshed every ten minutes (originally a whopping thirty minutes before criticism). In previous games, players typically upgrade their vehicles intermittently, usually at the moment when their car can no longer keep up with increasingly demanding competitors. In Payback, Ghost Games interweaves the economic logic of artificial scarcity into gameplay so that the experience of play is one of anticipating shop restocks like scalpers queuing up for concert tickets or designer sneakers, knowing that supply is limited. As speed cards can only be purchased at one of four shops peppered throughout an expansive map, a fair portion of the game must be spent running these errands to keep up with the demands of player progression through the campaign. By forcing players to make this long drive out to one of a handful of shops, Payback conceals the irritating, ten-minute restock times by positioning the player behind the wheel rather than counting down the clock within a menu screen. Thus, this cooldown period between restocks seems palatable despite its role as an artificial barrier to progress. This tedium is by design. In structuring the game as a series of back-and-forth errands to the tune-up shop in the futile hopes of optimal speed card stock, Ghost Games incentivizes restless players to find shortcuts to progress in the form of shelling out real cash for its even more parasitical loot box system.

To critically indict Need for Speed Payback’s speed card system as “broken” or “unplayable” misses the bigger picture, because in the eyes of Ghost Games, these are not problems but features. This boring, tedious, and convoluted system is very much an intentional and underhanded design meant to stonewall player progression in the hopes that they purchase a ticket out of this monotony through microtransactions with real currency. Excising side races entirely, Payback only offers main story events, where each new undertaking comes with a significant bump in a vehicle’s level requirement to successfully win races. Thus, revisiting previous races and grinding to earn bank proves necessary to progress in the game. Because purchasing costly speed cards using accumulated bank can be prohibitive, especially after grinding through old events over and over, the game’s “trade-in” system functions as a recourse. Trades-ins operate like a casino. Rather than apply acquired speed cards to a vehicle, players can trade in a card to obtain “tokens,” which in turn are fed into what amounts to a slot machine. In it, three slots correspond to the three speed card attributes: category, brand, and perk. Players can pre-determine the result of one of these, leaving the results of the other two to chance. Like all forms of gambling, this slot machine system frequently results in disappointment. For example, if players wanted to maximize the bonus multiplier by upgrading their car using one brand, they could lock in a specific brand like Nextech and leave open the slots for category (exhaust, gearbox, turbo, etc.) and perk (acceleration, speed, brakes, etc.). What results is a cycle of constantly playing the slots in an effort of securing your desired combination and winning big in a jackpot. 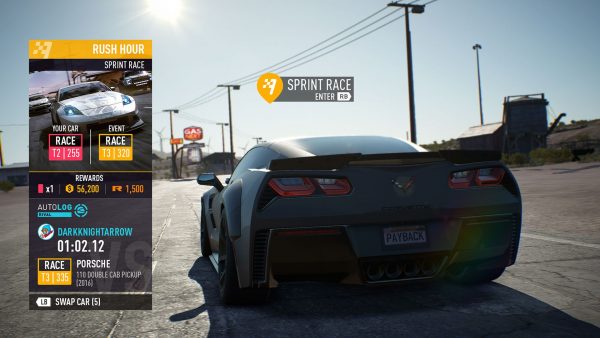 This trade-in system, bolstered in part by the intended ineffectiveness of understocked tune-up shops, stacks the odds against players. While any speed card can be traded in for a single token to use in these slots, three tokens are required to operate the slot machine to net a new speed card. Thus, trading in a speed card means players must work three times as hard, grinding away through old races to earn enough cards to trade in for the necessary tokens to hopefully win big. At every moment, Need for Speed Payback seems intent on introducing some form of gambling into gameplay. Beyond the slot machine logic of the trade-in system, each event comes with a “Side Bet” system that introduces an additional challenge such as achieving a certain drift distance or maintaining a certain speed in a race. While other games incorporate such optional challenge systems like the synchronization mechanics of Assassin’s Creed, in Payback, these side bets are tied to in-game currency. Players must opt into these challenges by laying down bank to reap the rewards of gambling, with failure resulting in lost bank. For a game ostensibly about rebelling against the greed of casino overlords, Payback absolutely fetishizes every aspect of gambling, finding ways to incorporate its oppressive economic logic to gameplay under the guise of challenge and lighthearted fun.

This ubiquitous presence of gambling is especially concerning given some countries’ legislation cracking down on gambling in games, specifically with regards to loot boxes in titles ostensibly meant for minors. Payback itself is rated T for Teen, with the ESRB information on the box providing no specific indication of gambling despite its prevalence throughout the game. The shipment system of Need for Speed Payback serves as the game’s most direct example of gambling, as it functions as its loot box system. After completing various challenges scattered around the map, players can receive randomized rewards filled with three prizes including a cosmetic item and a random number of speed cards and bank. While these shipments can be obtained simply by playing the game normally, Payback expectedly also allows players to purchase premium shipments using the game’s third in-game currency, “speed points.” These points are directly tied to real-world money, with 250 speed points equating to roughly 2.50 USD (the most expensive package allows players to purchase up to 5850 Speed Points for 50 USD). As this currency cannot be obtained by playing the game and progressing normally, players must enact a real-world transaction to obtain these premium shipments. Payback’s aggressive tactics to abstract real-world currency into bank, tokens, and speed points disguises the amount of real cash players might spend in the game with each monetary conversion (from USD to speed points to bank to speed cards to tokens), thus softening the guilt of emptying one’s wallet to a pseudo-casino—all before even racing your vehicle. 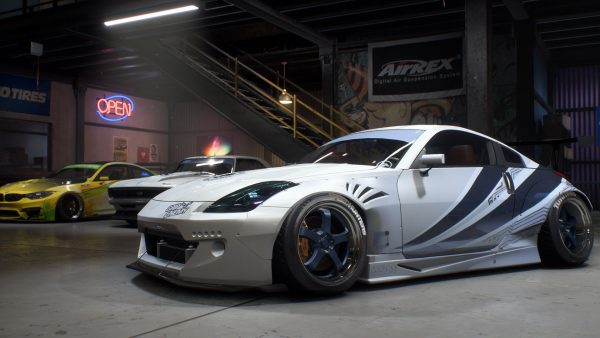 In what’s probably the most famous racing game franchise of all time, Need for Speed Payback seems totally uninterested in the appeal of cars and the excitement of racing, and its anti-casino revenge plot contradicts the game’s total embrace of these very systems. As speed cards cannot be used across different vehicles in your possession, buying a new car means players must start again from scratch. Thus, any incentive to build up a healthy garage like in other Need for Speed games completely evaporates, and I found myself stuck with just one car for each vehicle type for the entire game. That Payback eliminates any motivation to enjoy exploring the open roads with its abundance of cars at your disposal is a shame, too. Despite its exploitative, restrictive in-game economy, the game still has its strengths. Its rendering of the American desert is picturesque and glowing, and slamming your car into high gear while executing the perfect drift around red rock canyons and mountaintop skyways still feels immensely pleasurable, even thrilling. The very structure that supports this gameplay and your progress through it, however, unfortunately prevents Need for Speed Payback from being anything but offensive.