Opened World: A Living Out of Dying

Unlike the hyper-visible movie stars and directors of Hollywood or the chart-topping producers who work with musicians, videogame development can often feel impersonal and distant given the massive studios that seem to obscure the names and faces of the individual artists, writers, designers, and composers who comprise them. Because of this opaque production process, identifying specific human beings involved in development can shed light on how their personal lives—their past experiences, knowledge, worldviews, etc.—come to be reflected in the art they create and our reading of their work. The idea that we should turn towards the labor of individuals evokes auteur theory, a cinematic theory in which a singular artist (particularly a film director) serves as the preeminent author, with a discernible style that can be traced across their works.

The potential that auteur theory brings to the analysis of videogames remains barely explored because it frequently serves merely as writers’ shorthand to legitimize games with the credibility of a theory formed outside this medium. Moreover, the theory may be mischaracterized as a way to give a single individual full credit for a game even though its usefulness lies in its emphasis on deciphering and engaging closely with game texts. Thinking of developers as auteurs should ideally shed light on who they are as artists and how they operate on a personal level. Considering games as works made by auteurs allows for a deeper reading of games when analyzed in the context of their personal lives, as these works may be more autobiographical and intimate than they initially seem.

One commonly cited gaming auteur is Goichi Suda, or Suda51. While some note his penchant for violent storylines and embrace of otaku and cult film subcultures as indicative of his auteur identity, few have examined how these themes originate from his own background. While he often cedes directorial credit to other key figures in his game studio Grasshopper Manufacture, projects such as Let It Die and Killer Is Dead retain his authorial imprint because of his close involvement in their writing and production. This is comparable to David Lynch’s name being synonymous with Twin Peaks, despite the fact that he only directed six and co-wrote four episodes from the original two seasons. Suda’s influential style for Grasshopper Manufacture evokes “Studio Auteur Theory,” which writer Brian Ashcraft clarifies in his well-researched piece for Kotaku. Amidst videogames’ studio-centric, collaborative labor practices, the stylistic authority of figures such as Goichi Suda wholly informs the studio identity. Suda is actively drawing from his life story to create his games, and a greater appreciation of his craft demands that these autobiographical aspects be recognized. In particular, I want to examine Suda’s body of work from one particular angle: his fascination with death. 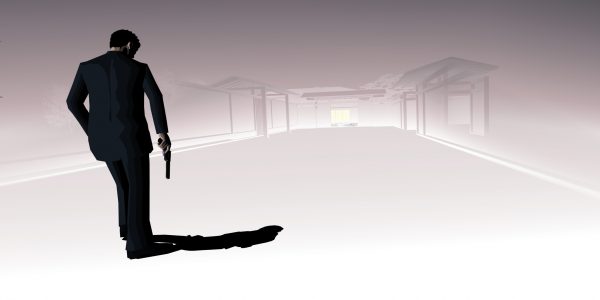 Suda’s rarely explored pre-videogame background working as an undertaker informs the subject matter of many of his games. His works are fundamentally concerned with themes of death and revival, ideas that would certainly be on the mind while handling bodies in a morgue. Suda alludes to his previous occupation working in this environment in a French interview, and despite claiming that his prior undertaker career doesn’t have an influence on his games, his words suggest the opposite: “I know more about death maybe, compared to other people. So with death I don’t want it to be like, cheap. There has to be something behind having to kill.”

Indeed, death serves as a recurring visual and thematic motif throughout his games. Decapitated heads function as ever-present supporting characters, such as the reanimated head of Juliet Starling’s boyfriend in Lollipop Chainsaw and the mysterious informant Susie Sumner who speaks in surreal aphorisms in Killer7. Death also operates as both setting and character: the underworld is the primary locale of Shadows of the Damned and the grim reaper guides the protagonist in Let It Die. Suda51’s familiarity with corpses and the funereal arts emerges in games such as The Silver Case and Michigan: Report from Hell, in which the player comes into contact with dead bodies in crime scenes, and even pre-Grasshopper Manufacture games such as Twilight Syndrome and Moonlight Syndrome involve ghostly investigations of past deaths.

For Suda51, videogames seem to be a kind of professional afterlife to working in a morgue, allowing him to creatively re-articulate his prior craft. The very structure of games focuses on cycles of death and revival, in which sequences of play are continually punctuated with “game over” screens. Having dealt with bodies that have expired and been destroyed, it makes sense that Suda would be interested in the moment when the player-character has died and waits to be respawned. What best defines the games of Goichi Suda, then, is the way in which the slow process of death is emphasized and even commodified in games such as Killer7 and Let It Die.

In Suda’s games, dying is part of a complex process. Reviving a fallen character comes with a price and significant effort on the part of the player, as Suda’s games rarely automatically respawn the player at a checkpoint. For instance, Let It Die involves a complicated insurance system that prevents the player from reviving their dead character without a second thought. Upon the player’s first death, the game zooms out from combat to an infomercial sales pitch in which a woman peddles “Direct Hell Insurance” coverage. This system revives a player-character with their inventory intact rather than have them surrender their progress and start from the beginning. Like real health insurance, the game’s hell insurance is not affordable. 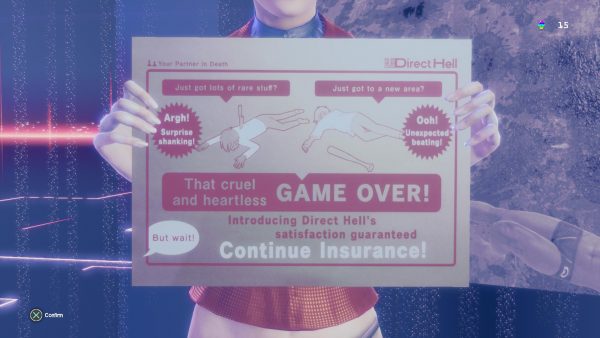 Because Let It Die is free-to-play, this insurance system functions as microtransactions where players pay for “continues” like inserting another coin in an old arcade machine. Indeed, the game itself is told via a story-within-a-story, as it’s revealed that the combat sequences of Let It Die take place within the diegesis of a fictional “Death Drive 128” gaming cabinet in a Tokyo arcade. In this way, Let It Die suggests that microtransactions are not a new business model but actually have older roots in the seemingly dead culture of the arcade. If the player chooses not to revive their character, then that dead character’s data is uploaded and reborn as an enemy for the player to later encounter and kill. Players pay money not just to avoid loss, but also to prevent having their progress turned against themselves via this zombie-like cadaver. In addition to the insurance package, the elevators that offer a direct link to the safety of the neutral hub world also cost in-game currency. These elevators serve as getaways from the nonstop combat of Let It Die, and thus, levels often deteriorate into a desperate race to these escape routes while enemies chase after the player with weapons drawn. Like the insurance packages that commodify the act of dying, the elevators that delay a gruesome death are commodified in turn.

Released over a decade before Let It Die, Killer7 similarly calls attention to a convoluted process of death and resurrection. In Killer7, the protagonist has multiple personalities that can be switched around throughout the game. When one dies in combat, another persona known as Garcian Smith must be used to retrace their steps to the place of death and collect their remains―a decapitated head in a brown paper bag―in order to resurrect the character and continue the game. Thus, respawning is a prolonged form of labor conducted by specialists like Garcian, reflecting Suda’s prior craft handling dead bodies. Moreover, the work of Garcian Smith anticipates Let It Die’s handling of death, in which uninsured characters must physically retrieve the belongings of a deceased, leveled-up character (a system also drawn from Dark Souls). In these games, Suda’s own personal experiences with the business of death clearly factors into gameplay mechanics to re-establish a status quo instead of a simple respawn.

Suda51’s relationship with the business of death isn’t the only aspect of his personal life we can examine. In The Silver Case, for instance, a key scene in a batting cage brings to mind an anecdote from his earlier days as a traveling salesman, a memory that he shares in this enlightening video profile. These explorations of the individual artists in charge of game development offer productive means to consider auteurism in games, revealing shades of varied personal lives that have gone largely unexamined but nonetheless factor heavily in the process of game-making.

While games criticism often leans towards an anti-auteur stance (a valid argument, particularly when it downplays broader labor conditions), auteur theory can be constructive as a means to humanize and contextualize the complexities at work in games and the deeper meanings behind what we play. In the aforementioned video profile, Suda remarks that across all his games, “The main character is always an individual, and the universe in which he evolves is society,” alluding to a lonelier time when he first moved to Tokyo as an eighteen-year old, in a completely alien city where he knew no one. His comments reveal the melancholy underside to his otherwise colorful and lively games: “When I came to Tokyo, I couldn’t really fit in society. I was looking for my place.” Thus, it’s not enough to take a game’s meaning at surface level. To better understand the artistry behind a game, it’s crucial to uncover how individual artists’ pasts inform their present circumstances and how they come to express these uncovered memories. 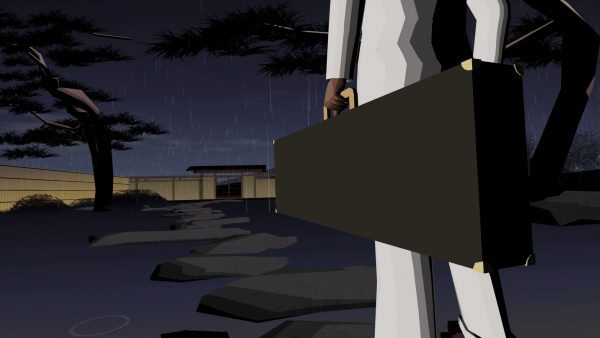 Tags: Killer Is Dead, Killer7, Let It Die, the silver case
← Due Diligence: Shut Up and Take My Money
Art Tickles: Defined by Their Exception →