Off the Grid: Pulse

Allison Winters fumbles in the dark.

Getting people to try your game, book, or show is fairly easy if you have a great premise. I could probably get all of you to pick up my epic adventure novel that promises to make you feel sympathy for a bevy of real world dictators. However, once you started reading it and realized it handled the subject matter with all the nuance of the manga Japan, you’d be disappointed to say the least. You’d also know how I felt after playing Pulse.

Pulse‘s premise of a blind girl navigating a fantasy land using echolocation is an excellent one. It perfectly encapsulates the feeling of being helpless and lost in a big world where you can only imagine what everything around you looks like. Objects fade in and out depending on your proximity to them and whether or not they make noise. So, for example, while you’re able to “see” the water rushing in the distance, you won’t know that there is a giant stone wall blocking it until you get closer. The game lets you visualize silent objects by having you throw little furry creatures that squeak, indicating where things are in relation to you. On the other hand, if there is too much sound around you, your world goes out of focus as you lose the ability to concentrate.

These are all solid mechanics, and had the developers fully utilized them they would be what pushes Pulse over the top. There are a smattering of puzzles that you have to figure out, though most of them consist of either sticking a furry thing in a hamster wheel or finding your way through a maze that is frustrating enough for a sighted person and pure hell for your character. There was never really a great use of the echolocation mechanics outside of one instance in the finale. After you’ve traversed a giant canyon you enter the belly of the beast that resides there. You’re forced to use the beast’s heartbeat to figure out where you stand in relation to the environment. Admittedly it’s not much different from what you were doing previously, but it’s a neat idea given your location.

Even worse, the game is rather vague on where to go at any time, and the overall goal is also never quite clear until the ending spells it out. I was lost for most of the game; if the developer’s intention was to convey how frustrating it can be to be blind then they succeeded with flying colors. Near the end, there is a maze on an expanse of thin ice that even once I understood the secret to traversing still left me feeling hopelessly lost. 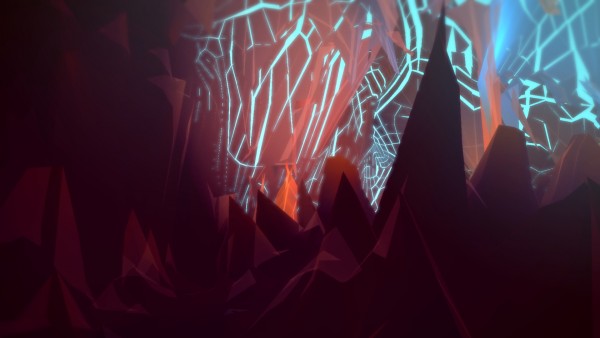 The story is rather simple, but I feel that it could have had more impact if the ending didn’t neuter it. The story is actually made quite clear as you play through, which makes the added epilogue that outright retells the story almost insulting. By spelling the straightforward story out, the air of mystery is lost and we’re left with something rather mundane.You play as Eva, who has grown up in a tribe that has shielded her all her life until she decides to make a traditional pilgrimage in honor of the supposed protector of her village. Along the way she meets a raven on loan from Twilight Princess. He doesn’t remember anything, and the sight of a glowing void that indicates his presence in the distance acts as a guide for the majority of the game to indicate you are going the right way. Things get somewhat trippy as you release the raven and start talking to a woman who is supposed to protect your tribe with a giant beast but appears to be using the beast to control the tribe instead. I like the irony that the only person to see through the longstanding tradition of fearful malarkey is the blind girl. Pulse’s narrative, where the one who we least expected to be the hero is, is done well. It does have this central theme of freedom running throughout, but the gameplay doesn’t do much with it.

I don’t really know if I’d consider this ironic or not, but the visuals are probably the strongest selling point of the game. The world has this beautiful emptiness that, along with wonderful sound design, builds an atmosphere of wonder and fear. Piercing eyes that don’t seem to belong to anything, studying you from the shadows and disappearing if you get too close, give the sense of being watched, and the screen turns red as an easy shorthand for danger. The frozen wastes section deserves a special mention for being gorgeous and possibly one of my favorite ice levels ever, at least visually, despite also housing the single most annoying puzzle in the game.

It’s sad that Pulse contains so much unused potential. The developers had this wonderful idea but failed to deliver. Every interesting aspect is wasted. The mechanics are never utilized to their full effect, and the story seems too afraid that people won’t understand it. The only thing we’re left with is a pretty game with a semblance of substance. It’s a mercifully short game with little replay value outside of collecting useless baubles. If you really need to play as a blind protagonist then wait until Perception gets released and hope it’s better.